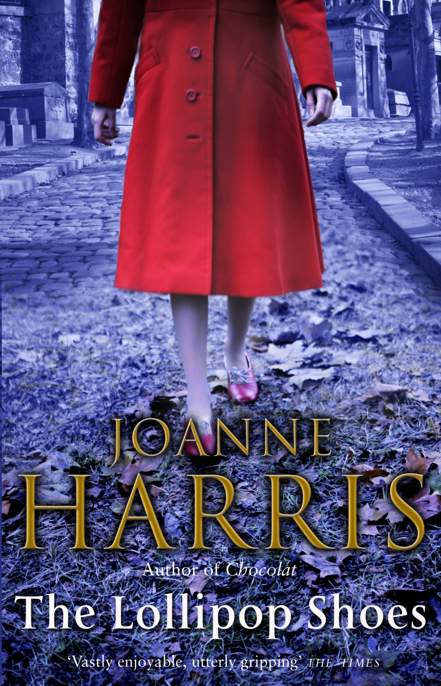 Seeking refuge and anonymity in the cobbled streets of Montmartre, Yanne and her two daughters live peacefully, if not happily, above their little chocolate shop. Nothing unusual marks them out; no red sachets hang by the door. The wind has stopped – at least for a while. Then into their lives blows Zozie de l’Alba, the lady with the lollipop shoes, ruthless, devious and seductive.

With everything she loves at stake, Yanne must face a difficult choice; to flee, as she has done so many times before, or to confront her most dangerous enemy . . .

Part Six: The Kindly Ones

Once again, heartfelt thanks to everyone who helped guide this book from babysteps to walking in heels. To Serafina Clarke, Jennifer Luithlen, Brie Burkeman and Peter Robinson; to my fabulous editor Francesca Liversidge; to Claire Ward for her wonderful cover design; to my terrific publicist Louise Page-Lund and to all my friends at Transworld, London. Many thanks also to Laura Grandi in Milan and to Jennifer Brehl, Lisa Gallagher and everyone at HarperCollins, New York. Thanks too to my PA, Anne Riley; to Mark Richards, for running the website; to Kevin, for running everything else; to Anouchka, for enchiladas and
Kill Bill
; to Joolz, Anouchka’s evil aunt, and to Christopher, Our Man in London. Special thanks go to Martin Myers, super-rep, who saved my sanity this Christmas, as well as to all the loyal reps, booksellers, librarians and readers who ensure that my books are still kept on the shelves.

IT IS A
relatively little-known fact that, over the course of a single year, about twenty million letters are delivered to the dead. People forget to stop the mail – those grieving widows and prospective heirs – and so magazine subscriptions remain uncancelled; distant friends unnotified; library fines unpaid. That’s twenty million circulars, bank statements, credit cards, love letters, junk mail, greetings, gossip and bills, dropping daily on to doormats or parquet floors, thrust casually through railings, wedged into letter-boxes, accumulating in stairwells, left unwanted on porches and steps, never to reach their addressee. The dead don’t care. More importantly, neither do the living. The living just follow their petty concerns, quite unaware that very close by, a miracle is taking place. The dead are coming back to life.

It doesn’t take much to raise the dead. A couple of bills; a name; a postcode; nothing that can’t be found in any
old domestic bin-bag, torn apart (perhaps by foxes) and left on the doorstep like a gift. You can learn a lot from abandoned mail: names, bank details, passwords, e-mail addresses, security codes. With the right combination of personal details you can open up a bank account; hire a car; even apply for a new passport. The dead don’t need such things any more. A gift, as I said, just waiting for collection.

Sometimes Fate even delivers in person, and it always pays to be alert.
Carpe diem
, and devil take the hindmost. Which is why I always read the obituaries, sometimes managing to acquire the identity even before the funeral has taken place. And which is why, when I saw the sign, and beneath it the post-box with its packet of letters, I accepted the gift with a gracious smile.

Of course, it wasn’t my post-box. The postal service here is better than most, and letters are rarely misdelivered. It’s one more reason I prefer Paris; that and the food, the wine, the theatres, the shops and the virtually unlimited opportunities. But Paris costs – the overheads are extraordinary – and besides, I’d been itching for some time to reinvent myself again. I’d been playing it safe for nearly two months, teaching in a lycée in the 11th arrondissement, but in the wake of the recent troubles there I’d decided at last to make a clean break (taking with me twenty-five thousand euros’ worth of departmental funds, to be delivered into an account opened in the name of an ex-colleague and to be removed discreetly, over a couple of weeks), and had a look at apartments to rent.

First, I tried the Left Bank. The properties there were out of my league; but the girl from the agency didn’t know that. So, with an English accent and going by the name of
Emma Windsor, with my Mulberry handbag tucked negligently into the crook of my arm and the delicious whisper of Prada around my silk-stockinged calves, I was able to spend a pleasant morning window-shopping.

I’d asked to view only empty properties. There were several along the Left Bank: deep-roomed apartments overlooking the river; mansion flats with roof gardens; penthouses with parquet floors.

With some regret, I rejected them all, though I couldn’t resist picking up a couple of useful items on the way. A magazine, still in its wrapper, containing the customer number of its intended recipient; several circulars; and at one place, gold: a banker’s card in the name of Amélie Deauxville, which needs nothing but a phone call for me to activate.

I left the girl my mobile number. The phone account belongs to Noëlle Marcelin, whose identity I acquired some months ago. Her payments are quite up to date – the poor woman died last year, aged ninety-four – but it means that anyone tracing my calls will have some difficulty finding me. My internet account, too, is in her name, and remains fully paid-up. Noëlle is too precious for me to lose. But she will never be my main identity. For a start, I don’t want to be ninety-four. And I’m tired of getting all those advertisements for stair-lifts.

My last public persona was Françoise Lavery, a teacher of English at the Lycée Rousseau in the 11th. Age thirty-two; born in Nantes; married and widowed in the same year to Raoul Lavery, killed in a car crash on the eve of the anniversary – a rather romantic touch, I thought, that explained her faint air of melancholy. A strict vegetarian, rather shy, diligent, but not talented enough to be a threat.
All in all, a nice girl – which just goes to show you should never judge by appearances.

Today, however, I’m someone else. Twenty-five thousand euros is no small sum, and there’s always the chance that someone will begin to suspect the truth. Most people don’t – most people wouldn’t notice a crime if it was going on right in front of them – but I haven’t got this far by taking risks, and I’ve found that it’s safer to stay on the move.

So I travel light – a battered leather case and a Sony laptop containing the makings of over a hundred possible identities – and I can be packed, cleaned out, all traces gone in rather less than an afternoon.

That’s how Françoise disappeared. I burnt her papers, correspondence, bank details, notes. I closed all accounts in her name. Books, clothes, furniture and the rest, I gave to the Croix Rouge. It never pays to gather moss.

After that I needed to find myself anew. I booked into a cheap hotel, paid on Amélie’s credit card, changed out of Emma’s clothes and went shopping.

Françoise was a dowdy type; sensible heels and neat chignons. My new persona, however, has a different style. Zozie de l’Alba is her name – she is vaguely foreign, though you might be hard pressed to tell her country of origin. She’s as flamboyant as Françoise was not – wears costume jewellery in her hair; loves bright colours and frivolous shapes; favours bazaars and vintage shops, and would never be seen dead in sensible shoes.

The change was neatly executed. I entered a shop as Françoise Lavery, in a grey twinset and a string of fake pearls. Ten minutes later, I left as someone else.

The problem remains: where to go? The Left Bank,
though tempting, is out of the question, though I believe Amélie Deauxville may be good for a few thousand more before I have to ditch her. I have other sources, too, of course, not including my most recent – Madame Beauchamp, the secretary in charge of departmental finances at my erstwhile place of work.

It’s so easy to open a credit account. A couple of spent utility bills; even an old driving licence can be enough. And with the rise of online purchasing, the possibilities are expanding on a daily basis.

But my needs extend to far, far more than a source of income. Boredom appals me. I need more. Scope for my abilities, adventure, a challenge, a change.

And that’s what Fate delivered to me, as if by accident this windy late-October morning in Montmartre, as I glanced into a shop window and saw the neat little sign taped to the door: