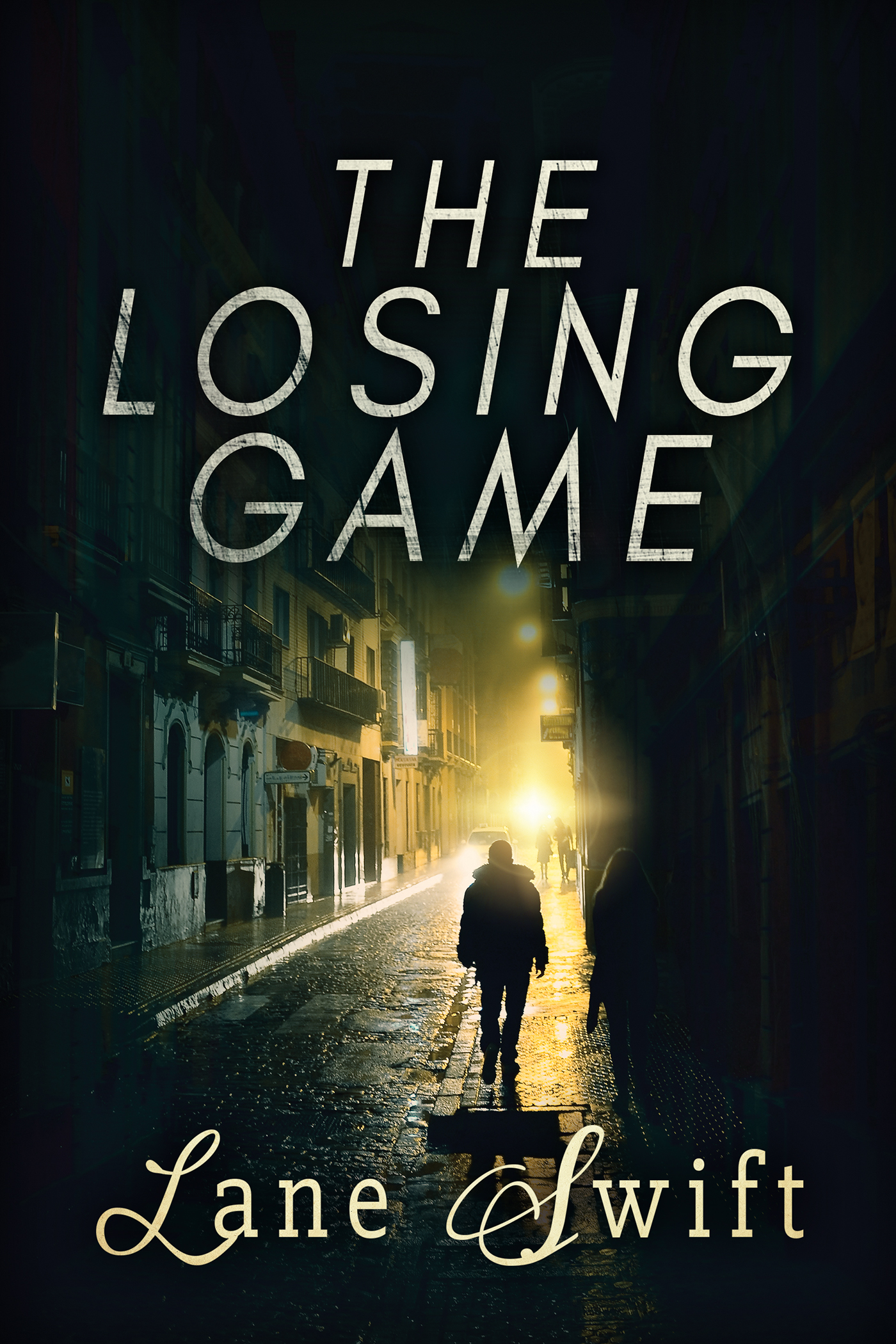 Grief-stricken and angry, Lucas Green is hell-bent on revenge against Richard Shaw, who killed his sister. Lucas has heard of a man who can help—the handsome and urbane owner of a boutique sex shop with a head for planning crimes. But Dante Okoro has a past he’s desperate to keep buried. Though Lucas piques his interest in more ways than one, Dante turns him away. Still, he wonders if he made the right decision….

An unexpected death brings Dante and Lucas together once more. This time they can’t ignore the chemistry between them. But courting a lover with lies is a dangerous game. Dante has been spying on Lucas, convinced he has plans to kill Shaw. Lucas has been spying on Shaw, waiting for the right moment to strike. If Dante admits his suspicions to Lucas, he’ll surely lose him. If he doesn’t, Lucas might do something reckless—and end up losing everything.

To Anna, who’s been with me from the start

I’M SO
very grateful to my troupe of beta readers. Elin, Louise, Indra, Anna, Dalina, and Pia, your honest, detailed feedback was invaluable.

Dante zoomed in on her thermal image. “Can you hear me, Kit?”

She tapped her head twice.

Beside Dante, his old friend Chief Superintendent Thierry Balon put down his coffee and moved his chair closer to the desk, so that he could get a better view of the screen.

When she reached the front of the house, beyond his line of sight, Dante switched cameras. In that split second, Kit had scaled the drainpipe, level with the height of the upstairs windows. Night vision glasses allowed her to move confidently in the darkness. A gravity-defying leap later, she stood on the sill, her back pressed against the window. Another stretch, another jump, and she landed on the tiled roof covering the front porch, successfully avoiding any pressure sensors that might lie beneath the drive.

Crouched upon the roof, she removed the electromagnetic scanner from her pocket. The alarm’s control panel was housed in a heat-insulated box to prevent locating it using thermal imaging.

Holding the scanner to the wall, she said, “My guess is that the control panel is on the wall by the front door. I’m picking up a signal located three meters from my current position.”

Earlier surveillance had revealed a vivid blue-and-white box under the eaves, above Kit’s head. The property was protected by a Fortune 3000 alarm system. Dante turned his attention to his laptop. The control panel communicated with the security company via a dedicated cellular channel. A signal jammer could temporarily block the radio signals from the sensors to the control box, and from the control box to the security company—but only if the “noise” created by the jammer was close enough. Five meters would do it. Three was a gift.

Lois, whom he’d always considered the cautious one of his two daughters, had successfully finagled an unsuspecting customer service representative out of Fortune’s operating frequencies. Dante reminded Kit, “Set the jammer to cycle across eight-sixty to eight-seventy megahertz.”

After that she’d have fifteen minutes before the system detected the fault and triggered the alarm. The security company would have to verify the problem, which gave Kit another twenty-five minutes until the police arrived.

She didn’t waste a moment. In one swift, smooth motion, she swung under the eaves of the porch. Wood frames supported the sides. She balanced, one foot on a side beam, one on the front doorknob, as she stuck the jammer to the wall. Using a glass cutter, she scored into one of the narrow panes of glass to the side of the front door and paused.

“Switching now and starting the timer.”

The camera feed on Kit’s contact lenses streamed directly to Dante’s computer. Through Kit’s eyes, he watched as she suction-cupped the first pane of glass free. She lowered it carefully to the floor and repeated the process on the second inner pane.

Kit was twenty-three but weighed forty-five kilos and stood a few centimeters over a meter and a half (about the size of the average twelve-year old girl). She squeezed through the tiny window frame and into the wide hallway.

Kit searched upstairs, then down, and found the safe in the formal living room, mounted inside the wall, behind what appeared to be a glass-encased bioethanol fire.

A week before, Lois had lifted the owner’s complete, fresh print from the front door, disguised as a boy delivering leaflets. The print was then transferred to a ballistic gelatin mold. Kit used it to open the safe.

Thierry made a grumbling noise in the back of his throat but said nothing.

Kit began to speak, but the alarm cut in over her voice. A few seconds later, an instant message lit up Dante’s screen:
20k in cash and handfuls of jewelry.

Most people had no idea that with a proper plan, burglary was depressingly easy. Technology be damned—nothing had changed since the beginning of the century, when Dante was a boy and the electronic age had been similarly young.

Dante swiveled in his chair to face Thierry. “I won.”

“Yes, and you could at least sound more pleased about it.”

Dante took no pleasure in winning this particular wager. “You forgot that Kit was a Southern Region gymnast until she was sixteen. The biggest obstacle to getting in the house was the alarm. We got lucky with the safe.”

Rising from his chair, Thierry lifted a thick envelope out of his blazer pocket and placed it on the desk between them.

“I should be horrified, not impressed. The security firm used to secure that house is endorsed by police forces all over the country. My job is to make the public feel protected, not remind them their safety is mostly down to dumb luck.”

During a summer barbecue, Dante, Thierry, and a third friend, Rashid Khan, had talked the way middle-aged men do after a few drinks, lamenting their expanding waistlines before reaching for another sausage in a bun. The conversation had quickly become heated, as they each in their own way put the failing world to rights.

Rashid had bragged about his new alarm. To him, security was a private responsibility. Thierry was quick to back him up, extolling the virtues of modern deterrents like any good law enforcer would, while at the same time advocating the social benefits of on-street CCTV. Dante had huffed and said that any intelligent person with a mind and the balls to do it could burgle a house without getting caught. The words had escaped his lips as easily as his fried onions had slipped out of his hotdog, onto his one and only pair of much-loved jeans. Rashid’s bragging was probably the reason he’d accepted Thierry’s and Rashid’s wager—to see if he could burgle Rashid’s manor house without getting caught.

Dante rested his fingertips upon the white envelope, still warm from being in Thierry’s pocket. “If it’s any consolation, this took a lot of planning. And Kit’s probably left all sorts of DNA evidence.”

“Some consolation. You cost me my weekend at the Retreat.”

Thierry meant the Fetish Retreat. He and Cecile tried to go at least two or three times a year. Dante slid the envelope back across the desk. “It was never about the money. You know that.”

“No. Dante Okoro likes always to be right. But a wager is a wager, and you won fair and square. Take the money. Give it to your girls, if you like. They mentioned over the summer they’re looking to get their own flat.”

“Whatever you say.” Thierry lightly patted Dante’s shoulder. “I’ll see you in a few weeks? Our gear will be ready then?”

“Yes. Four weeks at the outside. I’ll be in touch.”

After seeing Thierry out, Dante returned to his office. He took his pocket watch from his waistcoat and flipped open the cover. Twenty minutes past midnight. Kit wouldn’t be home for at least another hour. Stretching his arms over his head and grimacing at the crunch of his vertebrae and the resistance of stiff muscles, he contemplated a snifter of gin to pass the time.

Upstairs, a door closed and floorboards creaked. Lois was probably on her way to bed. Tomorrow, she and Dante would open the shop and let Kit sleep in.

Dante should never have dragged her into his wild scheme. She’d enjoyed the planning, and the execution, far too much.
He’d
enjoyed it too much. As much as he had once upon a time and a different lifetime ago.

The house settled into its night rhythm, cracking and groaning the same way it had for every one of Dante’s forty-four years and probably a century or more before that. The envelope on his desk was fat with notes—a thousand pounds plus a third share of the expenses for the bet. Rashid’s payment would follow tomorrow.

Dante could afford to give Kit and Lois the deposit for a flat without Thierry and Rashid’s money. Money wasn’t the issue. They weren’t ready. They might be able to rely on each other, like all close sisters did, but they still needed their adoptive father. They’d been set back by their early years and were still catching up. In another year, or two, Dante would help them look for their own place if that’s what they really wanted.

He eased up from his chair. “Look, I’m even putting aside a nest egg to help you get started.” Then he hid the envelope behind the clock on the mantel.

According to SatMaps, Le Plaisir (purveyors of the finest adult toys and much, much more…) stood last on a long row of four-story Victorian terraces. Lucas had unwittingly passed it once or twice. This end of the street, farthest from Roseport Quay with its spangling retail outlets and generic eateries, attracted a wealthier sort of shopper.

Bay windows flanked the door. Behind the glass, ocean-blue concertina blinds stretched from top to bottom, obscuring the inside. The only indication the shop might be open for business was a faint orange glow at the seams of the glass and frame.

Lucas considered his reflection. His coat was a fashionable knee-length gray sheepskin with an obscenely wide collar. Warm, but mainly bought to afford Lucas the bulk his physique lacked. The rest—who knew? Dressing “the part” required knowledge he didn’t have.

He recalled the cocktail bar conversation with his elderly friend, Avery, and how it had bizarrely led him here.

“If I could kill the bastard and get away with it, so help me I would.”

With her usual equanimity, Avery placed her dry martini on the bar and drawn closer. “If you’re serious, darling, I know a man who might be able to help you.”

“You know someone who could help me get away with murder?”

She rummaged in her handbag, amongst lipsticks and tissues and whatever other paraphernalia a seventy-year-old woman might need on a night out. “Aha. I knew it. I still have one.” She handed Lucas a gilt-edged business card and added, “Dante Okoro is such a romantic name.”

La mujer de tus sueños by Fabio Fusaro & Bobby Ventura
The Village Against the World by Dan Hancox
Little Black Dress with Bonus Material by Susan McBride
If I Were Your Woman by Donna Hill
Hellraiser (The Devil's Own #2) by Amo Jones
Caversham's Bride (The Caversham Chronicles - Book One) by Raven, Sandy
Not His Type by Crane, Lisa
Turning Point by Barbara Spencer
Monster in Miniature by Grace, Margaret
The Setting Sun by Bart Moore-Gilbert
Our partner