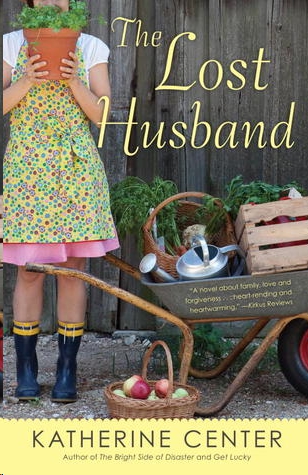 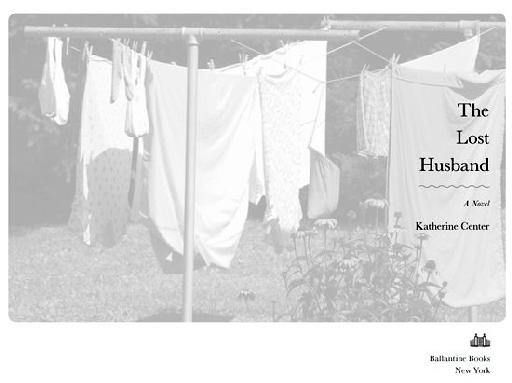 The Lost Husband
is a work of fiction. Names, characters, places, and incidents are the products of the author’s imagination or are used fictitiously. Any resemblance to actual events, locales, or persons, living or dead, is entirely coincidental.

BALLANTINE and colophon are registered trademarks of Random House, Inc.

My husband had been dead for three years before I started trying to contact him.

By then, our house was long sold, his suits were donated, and his wedding ring was in a safe-deposit box. All I kept with me was a shoebox full of meaningless stuff: a button from a shirt, an old grocery list, his driver’s license, his car keys, a doodle he’d drawn on a Post-it. That was everything of Danny’s I’d held on to: a box of junk.

That, and, of course, his children.

Piece by piece, I had left our old life behind—though I suppose you could argue that it had left me first—and now I was in the final stages of starting over, which meant, for my little lopsided family, leaving town. And so on this Texas-warm New Year’s Eve morning, I was following a ribbon of asphalt out to the countryside, checking and rechecking my directions while my kids poked each other with magic wands in the backseat of our minivan.

“Hey!” I said, catching their eyes in the rearview mirror. “Those are for spell casting only. No poking! Or else.”

This was about the tenth time I’d threatened to confiscate the wands. Weak parenting, I knew. I should have taken them away ten exits back—no second chances. But I didn’t want to have to take them away and go through all the drama that would follow. I wanted the threat to be enough.

We were approaching the town square of Atwater, Texas. A town two hours from Houston at the edge of the hill country that I’d never visited or even thought much about. The speed limit downshifted as we drew closer, and the rolling fields that had surrounded us since we left the interstate now gave way to barn-sized feed stores, cinder-block motels, and fast-food joints. I glanced down to review my next step: go around the courthouse, then a right on FM 2237, known to locals, apparently, as Broken Tree Road.

We were beginning, I kept telling the kids in a voice that sounded false even to me, “an adventure.” Though the truth is, moving to Atwater was much less about starting something than about ending something. Because there were many hardships in the year after my husband’s death—finding out he’d spent our savings, for example, and cashed in his life insurance—but the hardest hardship by far was having to move in with my mother.

Since then, we had stayed at her condo for two passive-aggressive years as I endured judgments on my parenting, my figure, my wrinkles, my grieving process, my haircut, and my “joie de vivre” with no end in sight until, unexpectedly, I’d received a letter from my mother’s famously crazy sister offering me a job and a place to stay. On her goat farm. In Atwater. Somewhere southeast of San Antonio.

Now, less than a week later, we were trading one kind of crazy for another—hoping against hope it was an upgrade.

And so the morning’s drive from Houston was not just the pavement between towns. It was the shift between our old life and our new one. All morning I’d felt it—the big-dealness of it—as a nervous flutter in my chest, and I was sitting straight up in the driver’s seat, gripping the wheel with both hands like a student driver at attention.

That is, as
at attention
as you can be with two children bapping each other in the backseat with wands. Because just as the road brought us to a stop sign at the town square, and just as I caught my breath at the county courthouse rising in front of us like a Disney castle, my son smacked his sister once again on the head with his wand, and when she shrieked, I hit the brakes and turned full around to face them.

“Quit it!” I said, giving them my sternest look. “The next time I have to say it, I’m throwing the wands out the window.”

They bowed their heads a little and held still.

“Got it?” I asked, and they both nodded.

Just as I was turning back around, I heard a man on the sidewalk shout, “Hey! Watch out!”

I looked up, but it wasn’t me he was calling to. It was someone in the crosswalk in front of us—and at the same moment I realized that, I also realized my car was not exactly stopped. Turning all the way around in my seat had eased my foot off the brake, and we were rolling forward.

I stamped my foot back down in time to see a girl standing in the crosswalk, directly in front of my car. She had turned her head at the shout, too, and thrown her hands out toward the hood as if they could protect her, just as we lurched to a stop, tires
squeaking, less than two inches from her knees. She looked straight through my windshield, and we locked eyes for longer than I’d ever held a gaze before.

I threw the transmission into park, but before I was even out of the car, the man who had shouted at us appeared in the crosswalk and grabbed the girl by the shoulders. And that’s all I saw as I leapt from the driver’s seat and arrived beside them: her dazed face and a white-haired guy with a mermaid tattoo on his forearm.

Then he turned to me. “You almost killed her!”

I was out of breath. “I’m sorry! I thought my brakes were on! My kids were fighting! I’ve been up since five!”

“Killed by a minivan,” this girl, Sunshine, said, as if she were reading a headline. “That’s not how I’d prefer to go.”

“Killed by an ice cream truck, maybe.” She shrugged, as if that suggestion were less bad. “Or killed by a Jet Ski.” She looked down at the stripes on the pavement. “Maybe a paragliding accident.”

My kids were back at it in the car as if nothing had happened. I could sense the wands in motion and hear squeals. Cars were lining up behind me. I was just about to excuse myself when she snapped her fingers, met my eyes, and pointed right at me.

It felt odd to brainstorm the best headline for this girl’s death. But it also seemed rude to deny her anything she wanted. So I faked it: “Yes!” Then I nodded. “So much better than a minivan.”

She could tell I was faking, though. She let her hand drop and stuffed it in her pocket.

That’s when I realized the tattooed guy was studying me. “Are you who I think you are?” he asked.

“Are you Jeannie’s niece?”

It was so odd for him to know that. And I had never in my life heard my aunt called “Jeannie,” much less with such affection. But he had me. “Yes,” I said. “That’s me.”

And then he did the strangest thing. He stepped over and hugged me. Tight. A big hey-howdy Texas hug. “Welcome to Atwater,” he said when he finally let go.

I wasn’t quite sure what to say. Sunshine was turning to leave. We’d been in the road too long.

Just at that moment the driver of the truck behind us got tired of waiting. He leaned on the horn. The sound startled us all, and something about it woke Sunshine up. She turned back and seemed to see me for the first time—seemed almost to recognize me, even. She stepped back in my direction, took my hand for a second, and ran her eyes over my face.

“That husband you lost?” she said, out of nowhere. “I can find him for you.”

That husband I lost.

The day I lost him, we’d had a fight.

I had dreamed he was cheating on me with—and I’m not kidding here—a trapeze artist from the circus. In the dream, I caught them having coffee at Starbucks, him in my very favorite
ice-blue tie, her in a sequined leotard with a plunging, faux-flesh neckline. Needless to say, she was more beautiful than me. No doubt more limber. And far sparklier.

Danny didn’t understand my point. “It was a dream,” he kept saying. “It wasn’t real.”

He was getting ready for work—towel around his waist, shaving at the sink. My daughter, Abby, then four, was still sleeping, as was her little brother, Theodore, a.k.a. Tank. I could hear their separate breathing sounds on their separate monitors.

At first Danny thought the dream was funny. “How do you know we were even having an affair?” he said. “Maybe I just wanted a trapeze lesson.”

Under my bathrobe, I was still wearing the little lacy thing I’d put on the night before in hopes of sparking a night of romance. The same one I’d fallen asleep in before he even made it home, actually. Though, in his defense, I was down for the count by eight-thirty.

“Trust me,” I said. “You wanted much more than trapeze lessons.”

Danny met my eyes in the mirror. “That’s a critical point,” he said. “Because I wasn’t.”

He was right. I shrugged. “It just tore me up to see you, okay?”

Danny took a breath. “Please tell me you’re not truly angry at me for something you imagined in your own head while I was fast asleep next to you.”