The Lost Train of Thought 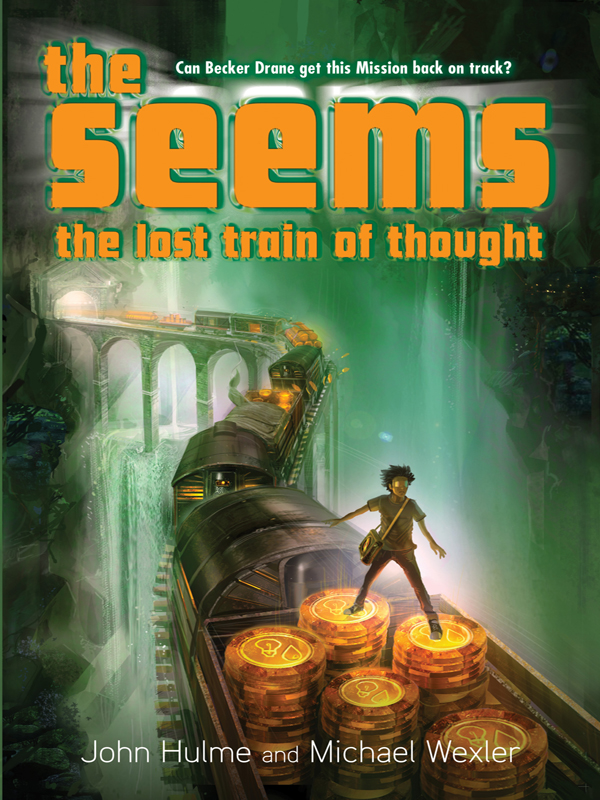 To David Kuhn, Titanium Deb,
and the kids with the safety-pinned shirts 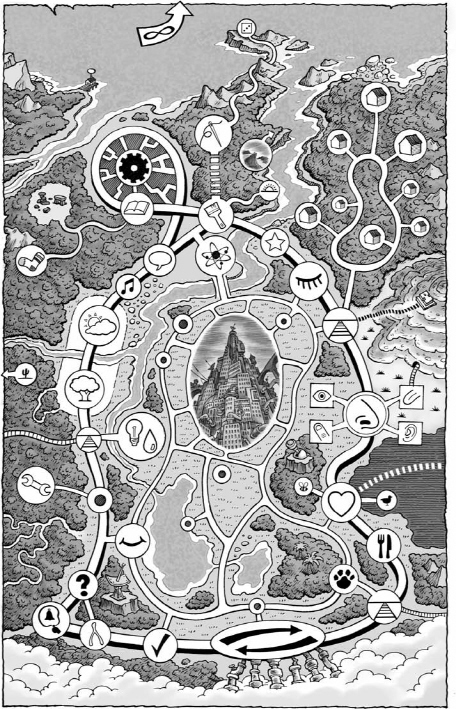 1 · The Court of Public Opinion

9 · The Middle of Nowhere

11 · The Most Amazing Thing of All

12 · The Mother of All Glitches 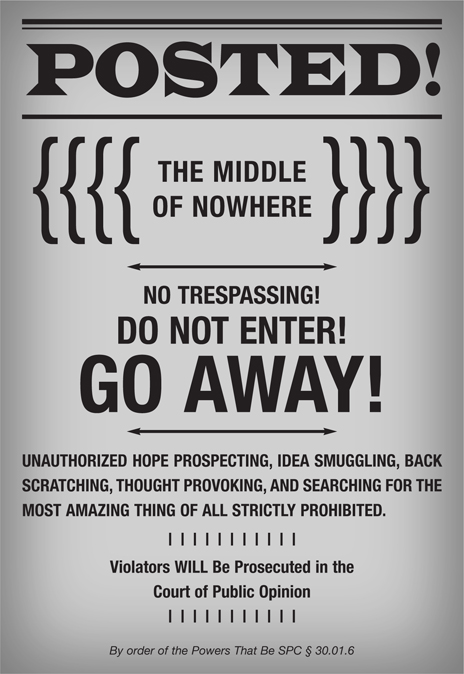 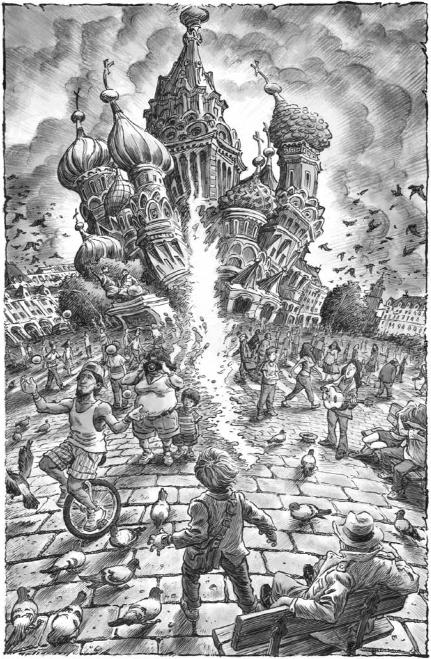 Ralph Koohler lowered his sports page and let the half-eaten doughnut in his mouth fall to the desk. Was it his imagination, or had he just heard one of the long-range sensors go off?

A few minutes of silence later, the forty-year-old father of three waited for his heart to stop racing. Ralph was not prepared to handle a crisis of any kind. He’d faced more than his share of those as an Air-Conditioner in the Department of Nature, what with the increase of smog and acid rain and the Powers That Be’s insistence that it was all “part of the Plan.” Thankfully, the transfer to the Listening Post had proved to be just what the Care Giver ordered.

In a small building that was remarkable only for the fact that it was covered with antennae and set atop a wooden pole nearly three thousand feet in the air, Ralph’s sole responsibility was to monitor a series of safety beacons scattered throughout The Seems. These devices tracked the movements of natural phenomena like Purple Haze and Clouds of Suspicion—rare occurrences that, if allowed to go unchecked, could have significant effects on The World. However, in the month since he’d been reassigned here, not a single buzz, ping, or clang had—

There it was again. Loud and clear and coming from a dusty transmitter that someone had stashed on top of the microwave oven. When Ralph rose from his desk and took a closer look, he noticed the only light on the metal box had flipped from red to green.

“Hey, Georgie, you’re not gonna believe this.” Ralph dialed down to his shift supervisor, who was stationed in the small shack at the base of the post. “Looks like I got somethin’.”

“You’re kidding.”
George sounded even more surprised than he was. The ex–Power Broker had retired from the Department of Energy a while back, and was just trying to keep busy by volunteering twice a week.
“Which sensor?”

“Don’t know. This thing’s so old all it’s got is a serial number on the side.”

“Read it to me and I’ll check the booklet.”

As Ralph waited for the supervisor to dig up the info, his left hand held his right to keep it from shaking. Twenty years ago, he had graduated from the School of Hard Knocks with dreams of making Air a thing of beauty again. In his mind, those dreams had failed to come true, and it had become harder and harder for Ralph to justify why The Seems didn’t do a better job of keeping The World out of harm’s way.

“You sure you got that number right, Ralph?”
squawked George over the intercom.

“’Cause the booklet says that’s the one hooked up to the beacon in the In-Between.”

Now both of Ralph’s hands were shaking.

“You’re not sayin’ what I think you’re sayin’, Georgie? ’Cause if you are, I’m quitting for good and moving out to the Sticks.”

Ralph took a deep breath, then turned on the old-fashioned dot matrix printer and plugged it into the back of the transmitter. Almost immediately, a stream of numbers began to churn across the paper, along with longitudes and latitudes and directional markers that Ralph didn’t pretend to understand. In fact, the only piece of information on the rapidly unspooling document that meant anything at all were the three words written in modern Seemsian across the top . . .

Ralph collapsed into his chair, and as he lifted the phone to his lips, he made a mental note to call his wife and tell her to start packing.

“Georgie . . . you better get the Big Building on the horn.”

Becker Drane sat down on a bench in the northwest corner of Red Square and pulled his Transport Goggles™
1.
off his head. Though it was late October, the unseasonably warm weather had caused the frost from the In-Between to melt off the lenses and soak his mop of hair. He wrung out a few drops of water, then turned his eyes to the fading light of afternoon.

Russia’s largest public gathering place was neither red nor square, but as always, it was a cacophony of color and sound. A juggler on a unicycle struggled to balance both himself and the three balls that seemed to be spending way too much time on the ground. A barefoot songwriter was strumming “Back in the USSR” in the shadow of Saint Basil’s Cathedral. And on the bench to Becker’s right, a boyfriend and girlfriend were arguing about something so strenuously that he was glad he couldn’t understand Russian. Ordinary people going through an ordinary day, none knowing what was about to blow this way.

“Fixer Drane to Briefer Frye, status report?” Becker tucked his Bleceiver™ into his pocket and pushed the wireless bud into his ear.
2.

“I want it done yesterday, Sim. According to the guys at the Listening Post, the Winds are coming through this Sector in”— Becker checked the update on the Bleceiver’s view screen—“less than five minutes.”

Swans Over the Moon by Forrest Aguirre
Bloody Bank Heist by Miller, Tim
Southern Ghost by Carolyn G. Hart
Private Message by Torella, Danielle
A Division of Souls - A Novel of the Mendaihu Universe by Jon Chaisson
The Sexy Forever Recipe Bible by Suzanne Somers
Hunters in the Dark by Lawrence Osborne
Why Can't I Be You by Allie Larkin
Just Kill Me by Adam Selzer
The Bone Tiki by David Hair
Our partner