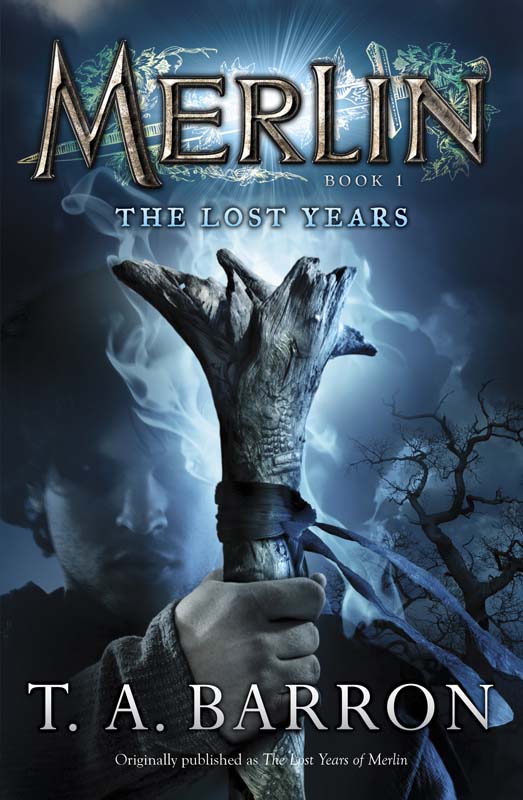 Try, you coward!
a voice within me cried.
You must try!

Yet, just as urgently, another voice answered:
Never again! Last time you destroyed your eyes. This time you will destroy your very soul. Never again!

“Show me!” commanded the goblin. Even through the thickening mist, I saw his muscles tighten. Raising his sword, he aimed the blade at Rhia’s neck.

Just then a strange wind, wilder by the second, shook the branches of the old elm in the center of the grove. Its creaking rose to a scream. As the goblin looked up, the tree snapped free of its roots and toppled over. He had only enough time to howl in agony as the tree crashed down on top of him.

I reached for the Galator, which had dropped to the ground. I slung the leather cord over my neck. With my other hand, I grabbed the fallen goblin’s sword and started slashing at another member of the band. The goblin, far stronger than I, quickly backed me against the trunk of the downed tree.

The goblin reared back to strike me down. Suddenly, he froze. A look of sheer horror came over his face—horror that I had seen only once before, in Dinatius when the flames swallowed him.

I whirled around. Then I, too, froze. The sword fell from my hand. For out of the swirling mist came a gargantuan white spider, her jaws slavering.

First published in the United States of America as

The Lost Years of Merlin
by Philomel Books,

Published as
The Lost Years
by Puffin Books,

THE LIBRARY OF CONGRESS HAS CATALOGED THE PHILOMEL BOOKS EDITION AS FOLLOWS:

Summary: A young boy who has no identity nor memory of his past washes ashore on the coast of Wales and finds his true name after a series of fantastic adventures.

Except in the United States of America, this book is sold subject to the condition that it shall not, by way of trade or otherwise, be lent, re-sold, hired out , or otherwise circulated without the publisher’s prior consent in any form of binding or cover other than that in which it is published and without a similar condition including this condition being imposed on the subsequent purchaser.

with special appreciation to
Ben
age four, who sees and soars like a hawk

I don’t know much about wizards, but I have learned this much: They are full of surprises.

As I finished writing
The Merlin Effect
, a novel that follows a single strand of Arthurian legend from ancient Druid times almost to the dawn of the twenty-first century, I realized that the strand had bound me up so tightly that I could not escape. As I tugged on it, the strand tugged back. As I unraveled it, the strand entangled me more completely.

The strand was Merlin himself. He is a mysterious and captivating fellow, this wizard who can live backward in time, who dares to defy even the Threefold Death, and who can seek the Holy Grail while still speaking with the spirits of rivers and trees. I realized that I wanted to get to know him better.

Modern scholars have argued that the myth of Merlin may have sprung from an actual historical figure, a Druid prophet who lived somewhere in Wales in the sixth century A.D. But that is a matter for historians to debate. For whether or not Merlin was ever real in the realm of history, he is certainly real in the realm of imagination. There he has long lived, and there he continues to thrive. He even accepts visitors on occasion. And since I wanted to write a work of imagination, not history, Merlin’s door was wide open.

So before I could even begin to protest, Merlin made his own plans for me. My other books and projects had to wait. It was time to explore another aspect of his legend, one deeply personal to the wizard himself. I suspected that, like most things in life, the more I learned about Merlin, the less I would really know. And, to be sure, I was well aware from the outset that making even a small contribution to such a marvelous body of myth would pose a daunting challenge. But curiosity can be a powerful motivator. And Merlin was insistent.

Then came the wizard’s first surprise. As I immersed myself in the traditional tales about Merlin, I found an unexplained gap in the lore. Merlin’s youth—the crucial, formative time when he most likely discovered his own shadowy origins, his own identity, and his own powers—was only fleetingly mentioned, if it was mentioned at all. Where he first tasted sorrow, where he first knew joy, where he first gained a particle or two of wisdom, remained unexplored.

Most of the traditional tales follow the same approach as Thomas Malory and ignore Merlin’s early life entirely. A few stories speak of his birth, his tormented mother, his unknown father, and his precocious infancy. (In one account, he speaks fluently in his mother’s defense when only one year old.) Then we hear nothing more of him—until, when considerably older, he is found explaining the secret of the fighting dragons to the treacherous King Vortigern. In between lies a gap of several years. Perhaps, as some have supposed, he wandered alone in the woods during those years lost from legend. Or perhaps, just perhaps . . . he traveled somewhere else.

This gap in Merlin’s early life contrasts starkly with the volumes and volumes of material about his later years. As an adult, he assumes many (sometimes contradictory) forms, being variously described as prophet, magician, Madman of the Forest, trickster, priest, seer, and bard. He appears in some of the earliest myths of Celtic Britain, some of them so ancient that their sources were already obscure when the great Welsh epics of the
Mabinogion
were first set down a thousand years ago. In Spenser’s
Faerie Queene
and in Ariosto’s
Orlando Furioso,
Merlin the wizard is present. He counsels the young king in Malory’s
Morte d’Arthur,
assembles Stonehenge in Robert de Boron’s twelfth-century poem
Merlin,
delivers many prophecies in Geoffrey of Monmouth’s
Historia Regnum Brittaniae.

More recently, writers as diverse as Shakespeare, Tennyson, Thomas Hardy, T. H. White, Mary Stewart, C. S. Lewis, Nikolai Tolstoy, and John Steinbeck have spent time with this fascinating figure, as have many others in many lands. Yet, with rare exceptions such as Mary Stewart, few have dealt at all with Merlin’s youth.

And so the early years of Merlin remain strangely mysterious. We are left wondering about his early struggles, fears, and aspirations. What were his deepest dreams? His passions? How did he discover his own unusual talents? How did he deal with tragedy and loss? How did he come to know, perhaps even to accept, his own dark side? How did he first encounter the spiritual works of the Druids—and, for that matter, the ancient Greeks? How did he reconcile his own yearning for power and his horror at its abuses? In sum, how did he become the wizard and mentor to King Arthur whom we celebrate still today?

Questions such as these are not answered by the traditional lore. Nor do the words attributed to Merlin himself shed much light. Indeed, one gets the impression that he was determined to avoid talking about his own past. A reader of the traditional lore could fairly easily picture Merlin as an old man, seated beside the boy Arthur, musing distractedly about the “lost years” of his youth. Yet one can only speculate whether he might have been remarking on the brevity of life, or perhaps referring to a missing chapter from his own past.