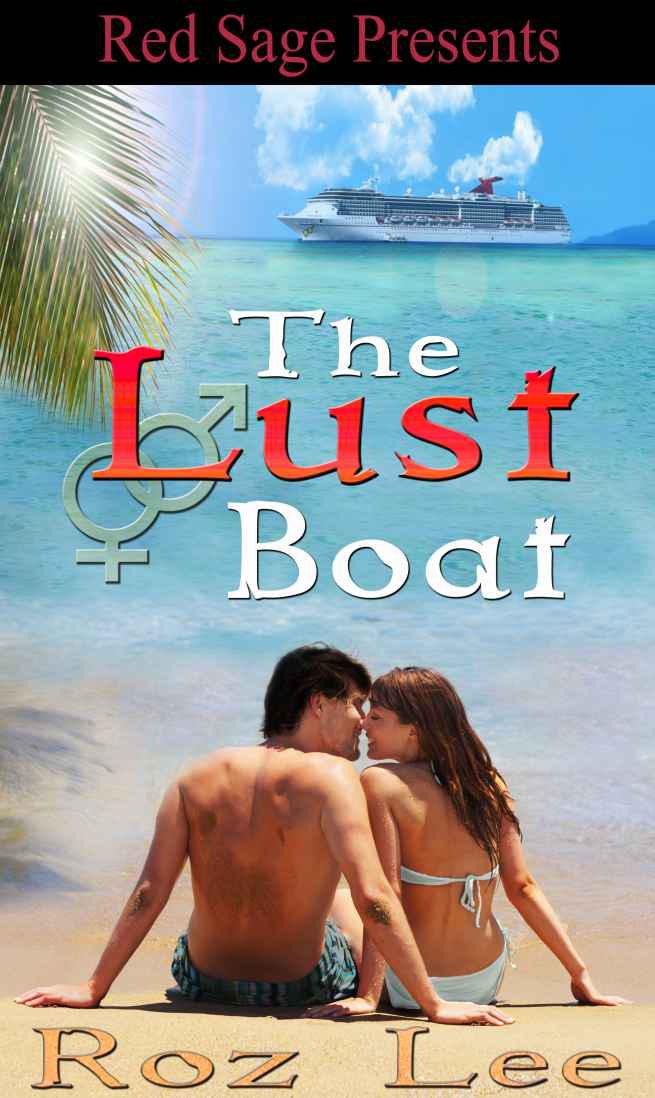 This book is a work of complete fiction. Any names, places, incidents, characters are products of the author’s imagination and creativity or used fictitiously. Any resemblance to actual events or locales or persons, living or dead, is fully coincidental.

All rights reserved, including the right to reproduce this book or any portion thereof in any form whatsoever in any country whatsoever is forbidden.

eRedSage is a registered trademark of Red Sage Publishing, Inc.

Visit us on the World Wide Web:
http://www.eRedSage.com

Published by arrangement with the authors and copyright holders of the individual works as follows:

ebook layout and conversion by
jimandzetta.com

Ryan watched the monitor as the last few passengers came aboard. His friend and business partner, Richard Wolfe, greeted each one in person. Ryan left the task to Richard, preferring to run the business end of the cruise from his forward suite, one deck above the Bridge. He rarely left the luxury suite, preferring solitude to the bacchanal atmosphere of the lower decks.

Richard, however, loved the party scene. As acting Cruise Director he had his finger, or to be more accurate, his penis, in every aspect of the cruise. The crew and staff were well trained, leaving Richard plenty of time to screw his way through the clientele. Such behavior would be frowned upon on any other cruise ship, but aboard the
Lothario
it was considered good customer service, and by all accounts, Richard was up to the challenge. In the two years they had been in business, not one complaint had been lodged about the quality of Richard’s customer service.

“What did you say?” Richard said into his headset.

“Nothing, just talking to myself,” Ryan answered. “How can we have over 2,500 guests and not an interesting one in the bunch?”

“You, my friend, need to get out of that tower of yours and walk among the living. We have 1,257 gorgeous women aboard this ship. And here comes number 1,258. Hello! Would you look at that?” His voice trailed off as Richard shifted his attention to the last passenger. Ryan glanced at the monitor. His head spun like a compass in the Bermuda Triangle. Botticelli would have loved those generous curves, the kind a man could hold onto, sink into. Soft auburn curls bounced over her shoulders and framed the face of an angel, a nervous angel, he surmised by the way she bit her lower lip and glanced over her shoulder as if contemplating her escape.

Richard took the angel’s hand and drew her closer to the security camera. “Hello. Welcome aboard the
Lothario
. I’m Richard, your Cruise Director. And you would be…?”

“Candace Williams.” She tugged on her hand, but Richard held fast.

“First names only, please. That is our one and only privacy rule onboard.”

“Oookaaay.” She looked like a rabbit caught in a trap as she once again tried to free her hand.

“Get your slimy hands off of her, Richard. You can have all the others,” Ryan growled into Richard’s ear. “This one is mine.”

Richard gave no indication he’d heard a word his partner had said. Instead, he drew Candace further on deck and tucked her hand up against his bare chest. “Anything you need just let me know. I am your servant to command,” he purred. Candace glanced over her shoulder again as the crew disassembled the gangway and stowed it for sailing. When she turned back to Richard and the camera above his shoulder, her full lips were drawn together in a thin line, her eyes wide, and her magnificent chest heaved.
Nerves; maybe a touch of panic
.

Ryan knew Richard was trying to annoy him. For two years, he’d tried every trick in the book to get him to take advantage of the veritable feast of female flesh offered up to them on every cruise. His first mistake had been showing interest in this one. He might as well have waved a red flag in front of a charging bull. By playing up to her, Richard insured Ryan would have no choice but to come down and rescue her from the clutches of his reprobate partner.

“May I see you to your cabin?”

Miss Candace Williams tugged on her hand again and this time Richard let it go. “No, thank you. I’m sure I can find it on my own.”

Her perfect ass wiggled out of sight, and Richard swung the security camera around to his face. “She’s a skittish thing; didn’t even want me to hold her hand. I might have to give her special attention, if you know what I mean. Bring her out of her shell so she can enjoy all the amenities onboard.”

“Stay the hell away from her.” Ryan broke the connection while his fingers flew across the keyboard. In a matter of seconds, he had Candace Williams’ information in front of him. She had a single cabin on the Aegean deck, forward. Age twenty-seven, five-six, heterosexual and she’d never been married. She’d booked her single ticket at the last minute, unusual, but not unheard of. A few more keystrokes brought her photo up on the big screen. He couldn’t say what it was about her; only that she wasn’t like their usual passengers. If he had to put a label on it, he would say she looked fresh, innocent perhaps.

He wondered if she knew what type of entertainment they offered on this cruise, or if she’d needed a place to go on the spur of the moment, and booked the
Lothario
without checking into the details. Whatever it was, Ryan was going to make it his job to find out. He needed to find a way to show her the various delights the ship had to offer without her knowing who he was. He knew from experience how his name and bank balance could change everything.

He took another look at the photo of Candace Williams. This woman was different. He knew it to the depths of his soul. Anticipation built inside him, and he smiled as he began to formulate a plan.

Candace didn’t know what to expect, but when she stepped into her stateroom, she knew this wasn’t it. The wall above the bed depicted a peaceful scene of a seaside villa at sunset and the rest of the room resembled a Greek boudoir. Pillows in shades of cream and white, trimmed with gold Hellenic borders, covered the king-sized bed. A matching comforter added a luxurious touch. For a moment, Candace forgot all her qualms, and flopped on her back onto the billowing soft bed and looked straight up. “Oh. My. God.” A wide-eyed reflection of herself stared back at her from the mirrored ceiling.

She rose to a sitting position, grateful for the comfortable mattress. If she could get past seeing herself in bed, she would sleep well. Candace stared at the welcome basket on the built-in vanity. The elaborate arrangement, more than anything else, brought home the enormity of the mistake she’d made by letting her friends talk her into this cruise. She didn’t like to think of herself as a prude, but the array of sex toys and suggestive items in the basket, told her how naïve she was. She poked through the basket, afraid to touch the contents. A few, like the rubber penis, were self-explanatory, but Candace blushed as she read the instructions on the boxes. Clearly, there was a lot more to sex than she’d ever dreamed of. Among the toys, creams and oils were several books. Like most college co-eds, she’d explored the
Kama sutra
. The one in the basket was a modern version, complete with full-color photos that had more than her skin heating. Maybe it wasn’t too late to go ashore. She ran to the outside door and stepped onto the glass-enclosed balcony. Miami was nothing more than a speck on the horizon. The
Lothario
had sailed, and her ship was sunk. Somehow, she would have to figure out a way to make the most of the situation.

Candace weighed her options. Perhaps she could stay in her stateroom for the entire week. She looked around for the room service menu and flipped open the tooled leather binder. “Oh my.” Her breath caught as she read. The extensive menu contained not a single food item, unless you counted chocolate body paint. Unable to tear her eyes away, she read through the list of goodies a mere phone call away, all included in her prepaid package. She recognized a few things, feathers, and sex oriented board games, but she couldn’t imagine what she would do with some,
if
she got up the nerve to order them. What did one do with peeled ginger root?

She closed the binder and tossed it next to the welcome package. Staying in the room was not an option. Unless the thongs in the welcome basket proved edible, she would have to leave the room for food. That thought brought another one. What would she wear for the next week? The brochure had said to bring only one change of clothes, everything else would be provided. Candace eyed the panties in the welcome basket and prayed there were more substantial clothes in the closet.

Would I Lie To You by Ziegesar, Cecily von
The Wicked Widow Meets Her Match A Regency Rogues Novel by Stefanie Sloane
Enchanted by Nora Roberts
One by One by Simon Kernick
JACK KILBORN ~ ENDURANCE by Jack Kilborn
Hardy 05 - Mercy Rule, The by John Lescroart
Melissa Senate by Questions To Ask Before Marrying
Sweetest Sin: Bad Boy Bundle by Delilah Wilde
Immortal Sacrifice: #4 The Curse of the Templars by Claire Ashgrove
The Harvest by N.W. Harris
Our partner