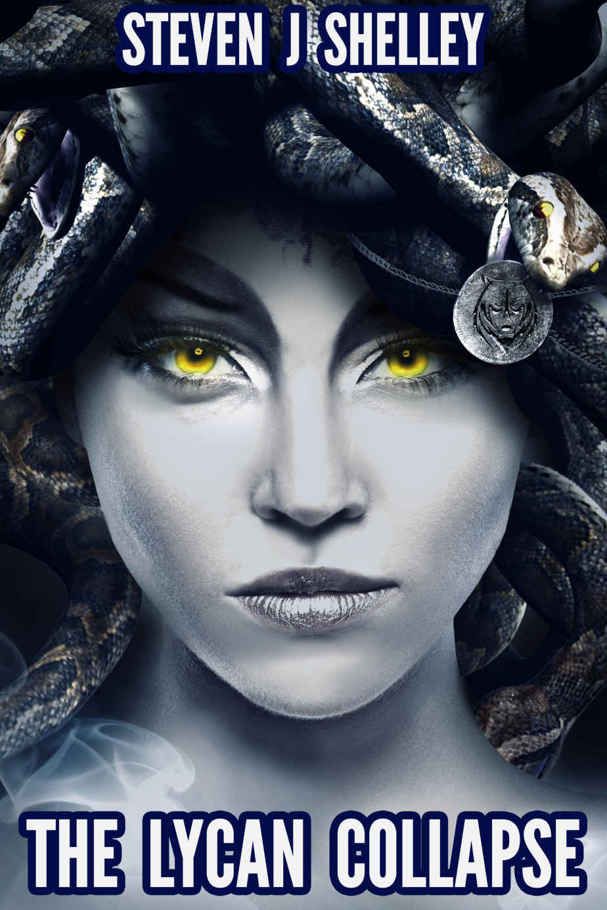 This is a work of fiction. Names, characters, businesses, places, events and incidents are fictional, and any resemblance to actual persons, living or dead, or actual places is purely coincidental.

Not recommended for younger readers.

Visit my
website
for quick and easy links to my catalog!

The Sands of Osiris (Book 1)

The Jungles of Verdano (Book 2)

The Ice of Solitude (Book 3)

Julian Banes soared through a waking sky. Over the dark forests of Maryland and into the flatter plains of Iowa. His work in New York was done for now, and the Council had summoned him to the Eyrie for debriefing. What was several hours travel for a normal man was a brisk morning jaunt for a strong male aquila. Julian sank into a helpful up-draft and picked up considerable speed as he bulleted west, chasing the night over the horizon. The cars on the interstate below looked like slow-moving ants. Humans weren’t very observant at the best of times, but if one happened to spot the eagle as he soared west they might think it was one of the many great eagles that plied the skies across the midwest.

As the day brightened the brown, well-ordered fields became rolling foothills. The Rocky Mountains beckoned to the southwest, majestically shrouded in cloud. Julian rolled in on a colder mountain zephyr, relishing the freshness against his spread wings. Now that he’d discovered his spirit beast, he didn’t know what he’d do if he wasn’t able to fly. What kind of person must he have been before? A dull, sluggish, ignorant man, surely. A man more concerned with numbers and business than the sheer joy of speed, motion and grace. Today he was celebrating his sixth month of being aquilan and it was like he won the lottery every day. He still couldn’t quite believe that he was blessed with the abilities he now had. Flight was the obvious one, and if it was just that he’d be more than happy. But there were other things. Razor-sharp vision. The keenest hearing. Better yet, an almost preternatural sense of danger. Aquilans were powerful in open spaces and smart enough to realize when danger was around the corner. Julian couldn’t think of a spirit beast he’d rather be. He felt like he’d been given a golden ticket for the coming Flux Age and wanted to tackle it like every day was his last.
That
was the last thing. Aquilans often lived to be over two hundred years old! Julian couldn’t quite wrap his head around that. For a man who never really appreciated how precious life was before, he was certainly aware of it now. He was set to live three times longer than the average human and he wasn’t going to waste a single moment.

Julian spotted an edge to the wall of rock that formed the shoulder of Mount Elbert and cruised down through a verdant valley dotted with pine and spruce. Pinehaven looked peaceful and serene through the trees as he made his approach. A log hunting lodge from the 18th Century, Pinehaven was once an exclusive retreat for New York businessman and sprawled gracefully from a central hall to elegant wings on either side. Julian folded his wings as he made a soft landing on the platform especially constructed at the lodge’s extreme western end.

A butler emerged to brush Julian down and make sure he was comfortable as he shifted back into human form. Stirling also carried a pressed pinstripe suit for immediate use.

Dressed and ready, Julian made his way through a relaxed living area. A figure emerged from the hallway - tall and willowy with long, dark curly hair and a cheeky grin.

“Welcome back, J,” she said in a sing-song voice.

“Hi, Jasmine,” Julian said with a forced smile. The girl was barely eighteen and made no effort to hide her attraction to him. Julian had no problem with that in theory, but the truth was her manner made him uncomfortable. She was friendly enough, but overly direct and manipulative. Besides, she wasn’t even aquilan. The only reason she was here, at the Council’s highest level sanctuary, was because she was a diviner. As such she was probably the most important person in the aquilan hierarchy. Well, in this crucial first phase of emergence anyway. If it wasn’t for Jasmine, Hector Caliri wouldn’t have found his spirit beast, and the aquilans would’ve stayed buried for who knew how long.

“Hector’s waiting for you,” Jasmine drawled with a sly smile. “You’d better go in.”

Julian nodded and took his leave, glad to get away. From the way Jasmine was smiling he might have to ward her off later that day. Such matters were tiring to him. For some reason he preferred to think about the musky smell of that lycan woman he met only days ago. Earthy, primal … compelling. He kept telling himself that such infatuations were a waste of his precious time but his guts refused to believe him.

Shaking such rumination from his mind, Julian strode into a dim room dominated by a long mahogany table. Currently it was empty save for the leather strap Hector always carried with him. Attached to the strap was a band of gold with stylized images of great eagles in flight. It was a beautiful piece of jewelery and Hector had understandably commissioned several more for his aquilan lieutenants. It was exciting to be part of a rising wave, a community alive after centuries of neglect and silence.

Julian sat opposite the burly bear of a man, his heart beating just a little more rapidly. Hector was placid enough, very considered in his words, but there was something about him that made Julian’s blood run cold. A ruthlessness, perhaps, a hint of something bleak just under that calm surface.

“How was the flight?” Hector rumbled in a deep baritone. Stirling entered and placed two cups of steaming pear tea on the table. Julian sipped gratefully before speaking, appreciating the chance to warm up.

“No problem,” he said at length. “I was at the ocean tunnel this morning.”

“Ah, yes,” Hector said slowly, scratching his bushy brown beard. He often reminded Julian of some viking or perhaps the Greek God Zeus. “Tell me about our friends.”

Julian shrugged, laying his palms on the table. “Lycans are extremely well organized,” he began. “Discreet. They come and go like shadows. Nothing unnecessary. Though that Jack Foley is quite active at night.”

“It’s not quite what it seems,” Julian said. “He’s pining for the Silver girl.”

“Yes,” Hector mused, tugging on his beard. “The one that disappeared off the grid in Europe.” Hector slammed his fist to the table. It wasn’t really hot with anger, but it startled Julian nonetheless.

“We have eyes across North America now,” he said, back in calm mode. “But our surveillance in Europe is pitiful. When the time comes I might get you to set up operations there.”

Julian merely nodded, but felt quite chuffed to be considered for such a role. His new career with the aquilans was working out just fine it seemed.

“And what of lycan operations?” Hector asked.

Hector nodded, deep in thought. He picked up his leather strap and idly flicked it against his wrist.

“They’re in a tricky place, those lycans,” he pondered. With a shrewd gleam in his eye he looked at Julian. “Refusing our assistance might not be in their best interests.”

Julian bowed his head. Bad news was never easy to deliver. “They’re holding firm, Hector. I suspect they’d rather die than give up their dark tissue.”

Hector’s eyes flashed, but it was true enough. Julian had been watching the lycans for weeks and seen nothing to change his mind. Further negotiation was pointless. The aquila would have to find another way of obtaining some of the priceless substance. A substance that turned standard Flux species into gloriously immortal ones.

Julian’s overriding mission, indeed that of the entire Aquilan Council, was to procure enough dark matter to ensure the continued survival of the aquilan race even after the Flux Age was over. The importance and value of such a prize was obvious. A part of Julian, the businessman in him, understood why the lycans monopolized the substance and saw themselves as humanity’s loyal protector. The aquilan in him saw the hoarding as pure, malicious greed. Something to be reversed at the first available opportunity. He had nothing against lycans as such - he found them to be essentially good and noble in their approach to life. They also took their responsibilities very, very seriously. But to allow other Flux races to die out for lack of dark tissue was a very grave issue indeed. It was said that countless creatures died at the end of the last Flux period, the Dark Ages. The Aquilan Council was determined that the eagle race, at least, would not succumb to the same fate this time round.

“We need to discuss ‘other’ strategies,” Hector said in a flat tone.

“I agree,” Julian said, taking a deep breath. “I think we should involve ourselves in their current short term objectives. Let them see how helpful we can be. Build their trust.”

The elder aquilan leaned back in his chesterfield and considered Julian’s earnest proposal. “Build the relationship,” he mused. “Earn their respect, their loyalty, the organic way.”

Hector leveled a stern gaze in Julian’s direction. “And how long do you think such a policy would take to bear fruit?”

Julian swallowed nervously.
That
was a tricky one.

“Well, Flux Ages tend to last more than one century,” Julian noted. “From that perspective we have plenty of time.”

Hector nodded as if he expected such logic. “It’s easy to see that from where we sit right now. But you haven’t considered how chaotic things may become. How many races will rise this time? Each one craving power and demanding allegiance from the rest of us? Human society as we know it stands to be torn asunder. No. The time to strike is now. We
need
to secure our rightful share of dark tissue before we are threatened by our enemies.”

Julian bowed a second time. “I understand, Elder,” he said respectfully. “My plan was to assist the lycans in their battle with the underground wights, but I can see that may not serve our grand purpose.”

Hector grinned at his charge, and Julian felt a wave of elation. “On the contrary, my friend, that is an excellent notion. You will go and ensure the lycans are able to remove the scourge from their beloved city streets. Help them any way you can. Tell the Mother it is a gesture of good will.”

That shrewd look had crept back into Hector’s eyes. Julian didn’t know what to make of it. He shoved it from his mind - the finer details of politics and diplomacy he was happy to leave to his superiors.