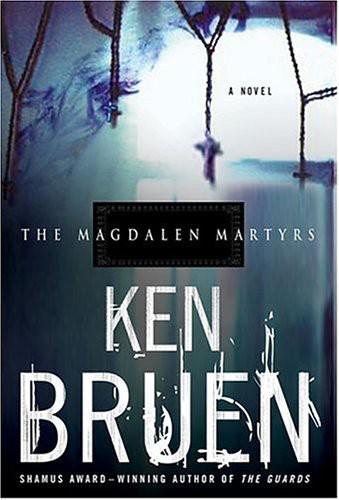 THE MAGDALEN MARTYRS
. Copyright © 2003 by Ken Bruen. All rights reserved. Printed in the United States of America. No part of this book may be used or reproduced in any manner whatsoever without written permission except in the case of brief quotations embodied in critical articles or reviews. For information, address St. Martin’s Press, 175 Fifth Avenue, New York, N.Y. 10010.

First published in Ireland by Brandon, an imprint of Mount Eagle Publications

The girl was on her knees, polishing the floor. She was dressed
in shapeless faded overalls. A spotless white apron bore witness to the laundry she was confined to. For three hours she’d been attempting to bring a high gloss to the floor. She knew it wouldn’t be complete till the very surface reflected her face. The baby she’d had to give up hung like a wound on her soul, searing the very prayers she was trying to mouth.

A dizzy spasm hit her and she bent forward, mopped her brow with a rag from beneath her sleeve. She heard footsteps and the click of heels on the wooden floor, a nun approaching. The voice came like a lash.

“Who told you to stop working, you lazy trollop?”

She knew better than to answer back but did lift her head momentarily to see which of the nuns it was. The swish of the heavy black beads came too quickly for her to duck, and it caught her full across the face, cutting her cheek and laying a welt along the ridge of her eye. The blood came spurting, marking the clean floor. The nun raised the beads again, saying,

“Now look at the state of that floor, you heathen street-walker.”

The girl bit her lower lip as she fought not to cry out. If they saw you weep, it seemed to incite them to even worse excesses. In her mind she called to a God who had so long ago deserted her, and there was no family she could ever appeal to. The nun was already raising the beads for a third and lethal blow.

December is a rough month. Screw all that festive preparation.
If you’re on your own, it mocks you at every turn. You open an old book and find a list of friends you once sent cards to. Now, they’re all dead or disappeared. The television is crammed with toys for children you never had, and boy, is it ever too late. The radio is playing ballads that once held significance or even hope.

It has been said that you truly only realise the full impact of being alone when you’re in the kitchen, as you prepare a meal for one. Everything is singular: one cup, one set of cutlery, one plate and, probably, one lousy plan. Live long enough alone and you develop obsessive traits. As soon as the meal is done, you wash the plate. Why? Who the hell is going to complain? Let the shit stack up for a week and see who cares; but you don’t because you can’t. The rituals you have developed are all that tie you to the human race, and the worst bit is the knowledge you are doing this.

Man, I’d gone through some different homes these past years. I’d had a flat along the canal, and if not happy there, I was as near to content as it gets. Got evicted and moved to Bailey’s
Hotel, one of the few remaining private ones in Galway.

Then, as the result of a case I was investigating, I seemed to land on my uppers and moved to a house in Hidden Valley. That was fine. Had me a time. Stone floors, open fireplace, deep freeze, neighbours, books . . . in a wooden bookcase . . . the whole citizen deal. But blew that to hell and gone with the worst judgement call of my chequered career. I feel the guilt and recriminations still. The line of dead who accuse me at every turn of sleep, they come in silent dread, the eyes fixed on me as I twist and moan in vain hope of escape.

So I drink. I’m way past my sell-by date and am on precious borrowed time. I should have gone down a long time ago. Lots of days, I wish I had.

The first two weeks of December I was dry. Gearing up. I knew I’d never get through the whole fiasco sober so was putting in time for good behaviour. It’s just another delusion that alcoholics practise. These lies are nearly as vital as the alcohol. You hug them close as prayer, and they are twice as heartfelt. The constant rain and the fecking cold, it permeates your bones. Along the way, I’d been seriously addicted to cocaine but was even refraining from that. So, I had the chills and shakes and, of course, a major dose of them blues.

I was living again in Bailey’s Hotel. Located near the tourist office, it is not easy to find and survives against the odds. Owned by a widow in her eighties, for some reason she has affection for me and continues to keep a room for me despite my worst excesses. She is under the impression I helped her out once; and if I did, I’ve forgotten how or even when. I’m grateful she doesn’t judge me. Perhaps it’s that we are both of that endangered species, “Old Galway”, and our time is truly limited. When we go, the hotel will be converted to luxury apartments,
and some yuppy will tread on the bones of our deluded selves.

Her staff consists mainly of Janet, a woman as old as herself, who is pot-walloper, maid, conscience, cleaner and as religious a woman as I’ve ever met. Because I read so many books, Janet thinks I’m somebody. This is an old Irish notion that, alas, fools fewer and fewer people. I had a calendar on the wall. The Sacred Heart was on the front, and the days were marked with pithy sayings to uplift your day. I can’t say they much uplifted mine. In red, the 18th stood out like a beacon. It’s my father’s birthday. That was the day I’d drink again. Just knowing the very time when I’d lift a glass got me through so many other impossible hours. I’d planned well. Had four bottles of black Bushmill’s, twenty-four pint cans of Guinness and an ounce of coke. I kid you not, this was just for openers; and for the lock-down days of Christmas, I thought it was a fairly decent plan.

The day came and I lashed in with a vengeance. Managed a week till I got a blackout and ended back in hospital. They were not pleased to see me and read me a minor riot act. Their hearts weren’t in it, as they knew I’d drink again. Mid-January, I was back in Bailey’s, trying to ration my drinking, abstaining from coke and suffering a depression like the depths of hell. Sitting on the edge of my bed, I was running some lines of Ann Kennedy in my head.

You might know the spot
Because that’s where they placed
Marilyn’s ashes
In a pale marble crypt
Looking across at our family.

There’s a pub in Balham that’s exclusively for the insane.
About a hundred yards from the bingo hall, which is appropriate. Even the staff are seriously deranged. When I was hurting, which was often, I’d go there and blend. You always met someone who knew hell from the inside. Shortly after my marriage, I’d gone there, ordered a pint and a whiskey, considered my future. A guy next to me was dropping soluble aspirin into a pint of mild.

Took a look at him. A tattoo on his neck that was either an anchor or a swastika, a scar that ran from his left eyebrow to his upper lip. As often is, he had gentle eyes. Sure, there was lunacy, but you can’t preserve that gentleness with sanity. I said,

Nice neutral territory. He savoured my answer, then,

Then, oh so very carefully, he slid the glass to his left and shouted up a pint of bitter. He said,

“The trick is not to drink it.”

For that day and precious few others, I was wearing the wedding band. Bright and glowing, in that place it reeked of another country. He fastened on the glow, said,

“You know the best thing ‘bout that.”

“They can’t call you queer.”

I had recently got my customary letter from

THE DEPARTMENT OF JUSTICE

It has come to our notice that you have failed to return an item of equipment.

We draw your attention to Article 59347A of Uniform and Equipment on page 25 of the manual. Said Item No. 8234, a garda all-weather coat, remains the property of the Department.

We anticipate the speedy return of said item.

Her Royal Baby by Marion Lennox
Keys to the Castle by Donna Ball
Eight Nights by Keira Andrews
A Soldier's Daughter Never Cries by Kaylie Jones
Diamonds in the Mud and Other Stories by Joy Dettman
Mortal Remains by Margaret Yorke
¡Otra maldita novela sobre la guerra civil! by Rosa, Isaac
Rogue State by Richard H. Owens
Can't Anyone Help Me? by Maguire, Toni
At The Edge Of Space (Hanan Rebellion) by C. J. Cherryh
Our partner