Read The Mage of Orlon: The beginning Online

The Mage of Orlon: The beginning 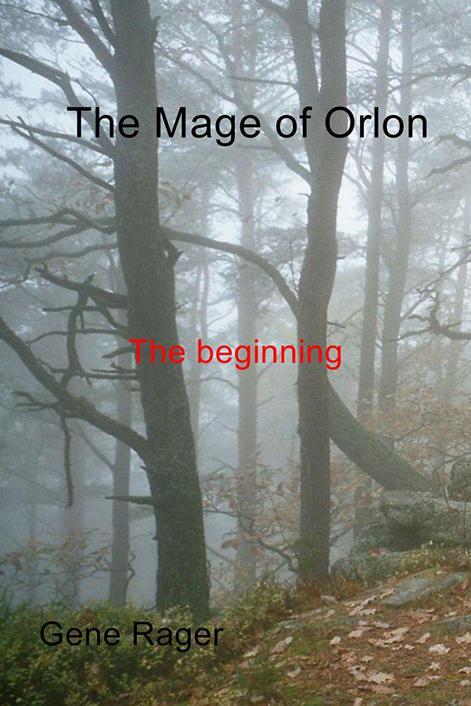 Copyright © 2014 Gene Rager
All Rights Reserved. This book may not be reproduced, transmitted, or stored in whole or in part by any means, including graphic, electronic, or mechanical without the express written consent of the publisher except in the case of brief quotations embodied in critical articles and reviews.

There comes a time in every realm when the decision is made as to which force will govern the land, either science or magic.

The arrows blotted out the moon as silent death approached the mage.
The villagers below would not survive this onslaught ordered by the Dark Queen of the north.
The arrows would wound or kill the warriors that were making their stand, and then the riders would come to finish what the archers had started.
Slowly the ancient mage raised his hands, the power poured into his body like liquid fire.
With the arcane words barely whispered on the wind the magic lashed out to do the mage
’
s bidding.

Slowly the bolts of death began to slow until they hung in the air unmoving, the mage began to sweat there are so many arrows, so much force behind them.
The mage doubled his resolve he could not allow the villagers to be killed so mercilessly by the Dark Queen
’
s hunters.

A lone figure stalked up on the mound surrounded by the villainous archers; he was their leader, Mordock the slayer of magic.
Mordock unsheathed the mage slayer, an arrow that was created in the forge of lost souls.
The mage slayer could withstand any magical attack, and would always find the magic user
’
s heart a most satisfying mark.
After this foul bolt killed the magic user it would return to Mordock
’
s quiver where it would await its next victim.

Mordock knocked this magical harbinger of doom and let it fly.
The slayer left the bow on gossamer wings, and the magic locked on to the old mage
’
s heart.
Higher and higher the arrow flew worming its way through the suspended arrows, and drawing closer to its next victim.

The mage stood his ground; if he fled the arrow would hit him no matter where he went.
The greater concern was the hundreds of arrows that were still suspended in the air, when he died his spell would die with him releasing the arrows to follow through with the grim task of destroying the villagers.

“
Run away! Take cover!
I am done for, but you can fight another day!
”
The mage felt his impending doom drawing closer at a terrible speed.
He only had one chance to preserve the villagers
’
only hope of survival.
Steadying himself he visualized the candle of resurrection that was safely inside the castle chambers deep below the ground.
With one steady thought he whispered
“
esporanza!
”
The candle
’
s wick burst into a perfect flame just as the mage slayer slammed into the mage
’
s chest.
The mage fell backwards the life force being drained from his body before he hit the ground, the deadly bolt still vibrating from the impact The arrows began to rain down on the empty village; the mage had sacrificed himself for the people he loved giving them time to escape.

Nathan awoke grabbing for an arrow that was not there, another dream, it was just another dream.
Nathan had been having this same dream over and over with the intensity getting worse.
He was only seventeen and already having night terrors, his therapist would have a field day with this, if she knew.

The Sun was bright, shining through the bedroom window.
Nathan
’
s alarm clock was blinking twelve O
’
clock defiant in telling the correct time.
Slowly it dawned on Nathan
…
he was late.

“
Oh crap, I
’
m late!
”
Leaping from his bed Nathan slid on the floor, his socks giving no traction as he landed squarely on his butt.
“
This day is going to be horrible.
”
He sighed as he regained his feet.
Running into the kitchen he caught sight of the clock on the wall.
“
Seven thirty!
Great I really am late this time.
”
He exclaimed to nobody in particular.

Running out the door Nate decided to take a short cut to the school.
Nate had his license, but his car still needed more work done before he could start driving it, now he wished he had spent the money on parts instead of frittering his money away.

As the alley
’
s entrance blurred by, Nate began to get winded.
He stopped and noticed a shiny coin in his path.

Picking up the coin in his hand, it began to glow.
Without warning the coin burst into a white hot zenith burning a perfect indention into Nate
’
s hand.
Screaming from the pain Nate threw the glowing coin, but it went three feet from him and hovered in the air for only a moment before beginning to spin.
The coin began spinning faster and faster turning all different colors until it settled on black.
Nate watched in stunned silence still cradling his burnt hand.
The coin made a diagonal slash to the left then, a slash to the right the third slash had touched the ground, and then the pull began.

Nathan was startled back into motion, as the strange pull seemed to bring him closer to the black zigzag.
It must be a dimensional rip, an experiment gone wrong, something!
No matter what it was the pull kept bringing Nate closer to the rip.
Judging from his hand Nate didn
’
t want anything to do with this thing that appeared before him.
Grabbing everything he could Nate fought the pull of this crack in reality.

The force increased and only Nate seemed affected by it, finally his hands gave free and Nate flew feet first into the crack.
He screamed in terror as he felt his body break apart into energy and was sucked into the darkness.

Nate woke up falling.
“
No, no, nooooo.
”
The last no was punctuated by Nate hitting the ground hard enough to knock the wind out of him.

Slowly Nate moved his legs and arms.
Nothing is broken, not even much of a scratch. Where am I?

The forest was alive with vibrant sounds of birds chirping.
The air was fresh and pure.
It was hard to believe that a moment ago he had been standing in an alley.
A thought occurred to him, he had been late to school!
Quickly he pulled out his cell phone from his pocket.
The no service message was an unwelcomed sight.

How was he going to explain this to his parents?
He was walking to school and was sucked into a forest.
That would go over well with his father.
Nate and his dad had been fighting about his future.
Nathan wasn
’
t sure what the future held for him, but he was sure it had nothing to do with flying!
The thought made his stomach roll.
Now he was in the forest with no cell signal.

Nathan remembered his back pack.
He opened it to find a few granola snack packs, his laptop, his tablet, and a few folders that had papers due today.
Great not only will my parents be pissed, but the teachers won
’
t be happy either!
He was right this wasn
’
t going to be a good day at all.
Nate kneeled down and closed up his pack.
Getting up he heard the twig snap before the voice came.

Nate looked over to find a girl his age pointing a bow at him.

She said with a deadly calm in her voice.
“
You are in the elven wood of Taro, trespassers are killed on sight!
”

Nate panicked.
“
I didn
’
t know you owned the property, it was an accident!
”

Nate slowly did as he was ordered; he got a good look at his executioner.
Blond hair cascaded over a golden tan.
She was petite, but her muscles were toned, her eyes were the deepest blue he had ever seen, and the clothing she wore was green with sparkles of red and white, like crystals in rocks.

He took the time to look at the strange clothes and decided to try to bluff his way out of this situation.

“
Look at me whoever you are!
”
he raged.
“
I am not dressed like you or anyone else you have met, look at my clothes!
”
“
Do you see a weapon on my side or in my hand?
If I was someone who knew of your territory would I come in here unarmed?
”
he had made his point, or so he thought.

“
You dare trick Lela Albright, Princess of the elves with lies?
”
The outrage in her voice lashed out like a knife.
Still determined to bluff his way out Nathan tried again.

“
Listen princess, I am not lying and elves do not exist!
So whatever it is you are trying to do just stop it!
”
His temper had got the better of him it wasn
’
t the first time, but it might be the last.

“
You act as though you have the right to be angry, but it is my land that is being trespassed on not yours.
”
Lela stated flatly.

Nate had enough of the game he was mad now.
“
Look you psycho, if I had a bow and was running around telling people I was about to mug, that I was an elf, and this is my magical woods so I will shoot you for trespassing, they would lock me up and through away the key!
”

Slowly she lowered the bow with a puzzled look on her face.
“
What is mug?
I am not familiar with this term.
”

“
You know robbing, though the elf angle is new.
I only have ten bucks on me, but you
’
re welcome to it.
”

The puzzled look grew deeper on her face,
“
You cannot have ten deer on you the weight would crush you.

“
Not deer, money, mullah, cash, coin do you understand?
”

Her face transformed into a mask of anger far worse than before,
“
Coin, you think me a common thief?
That I desire your coin pouch?
”
The outrage in her voice lashed out like a whip, tearing Nathan
’
s own confusion apart, and causing his anger to flare up as well.

“
Enough with the medieval crap, it
’
s called a wallet!
”
With that, he flung the wallet into her chest.

“
What is this, you could scarcely carry any coins in this useless thing?
”
The anger had once again fled her and left her only puzzled.
She kicked at the wallet with her toe as if it were a vile smelling thing.
Covering his eyes with exasperation Nathan spoke,
“
Look inside the wallet.
”

Slowly Lela lowered the bow, and with a flash her hands were holding the wallet.
Cautiously she opened the folded leather wallet; she removed the two five dollar bills and let them fall to the ground.
With a wicked smile she nearly yelled in triumph.

“
A trick, I knew you were lying there is no coin or deer in this folded leather pouch, only paper!
”

“
What are you doing?
That is ten dollars at your feet!
”
he exclaimed.

Lela eyed the green paper suspiciously,
“
Are you telling me that this is your coin?
”

With an exasperated,
“
Yes
”
Nathan felt tired.
This whole ordeal had worn him out.
The elf princess eyed Nathan as if looking at him for the first time.
He had strange clothes, no weapons, and the money in the strange leather pouch made up her mind.