Read The making of a king Online

The making of a king 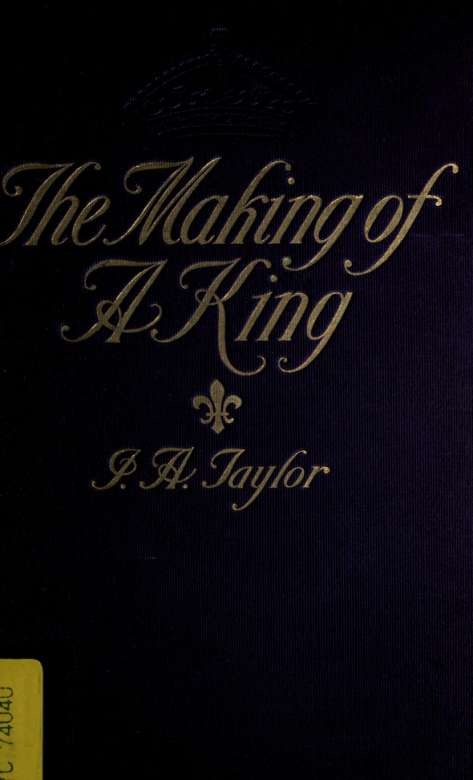 This book made available by the Internet Archive. 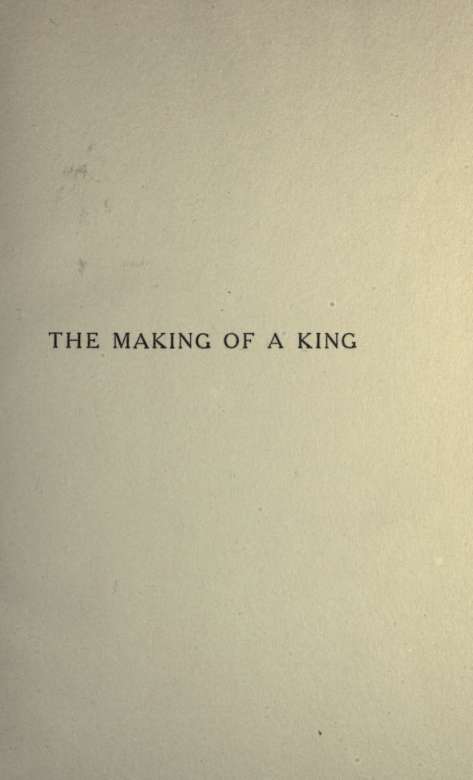 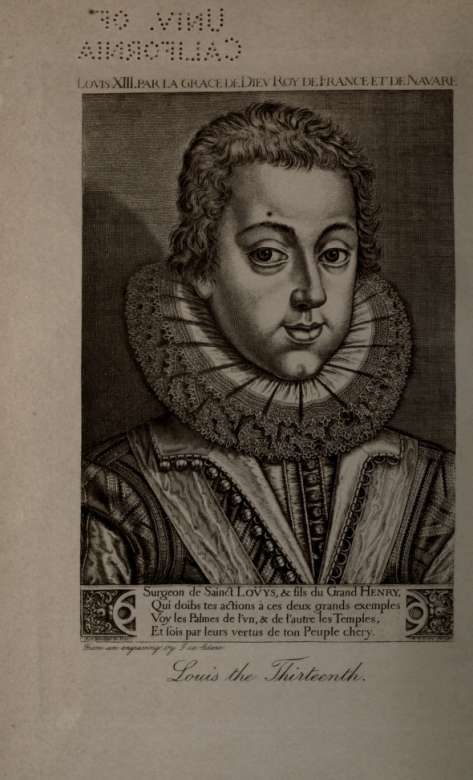 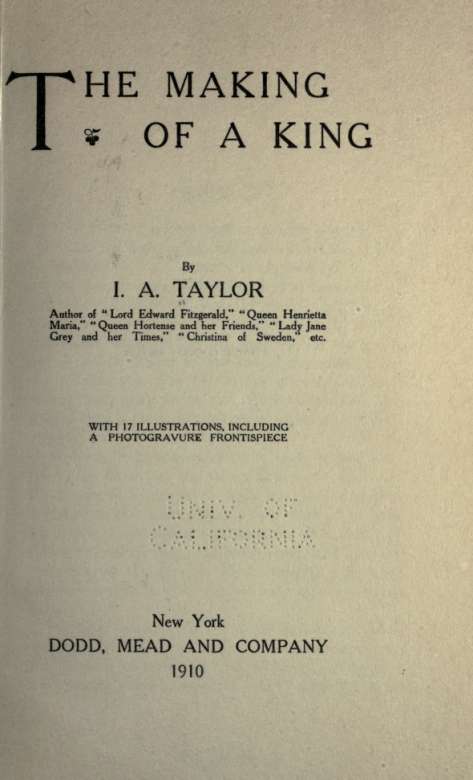 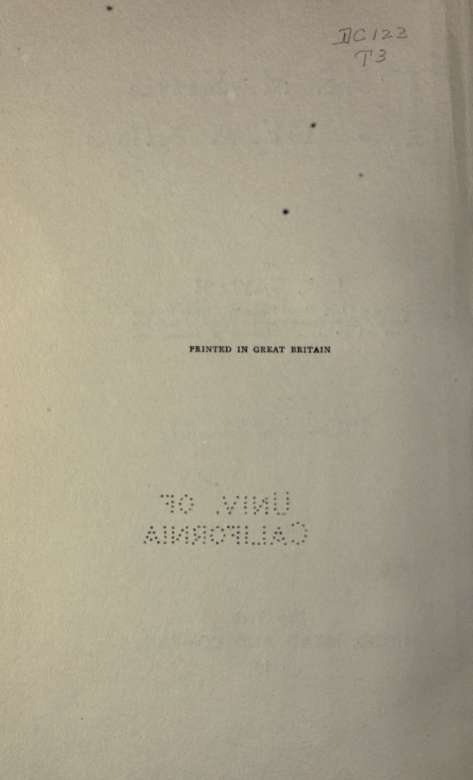 THE nets of history have a terrible tendency to let the little fishes through. It would indeed be difficult to find a mesh strong enough to hold captive the monsters of the deep, and at the same time sufficiently delicate to catch the shining goldfish, or even a moderate-sized trout. The great facts of a man's life, when his life has mattered to the world, can usually be trusted to take care of themselves ; but the touches that give life to the picture, the puny virtues and petty faults, the lovable weaknesses and follies, have a precarious existence so far as posterity is concerned.

And yet these evasive elements, these trifling incidents, are often just the things best worth knowing. Bones are well enough in their way, and doubtless necessary to the human fabric ; but which of us, save the ascetic, would choose a skeleton for contemplation ? Its ephemeral clothing, the beauty and, not less, the blemishes, of the garment which decently veils what lies below—this is what the ordinary man desires to look at.

For this reason, quite as much as for their conspicuous position, or the influence they exercised over the destinies of men, the lives of Kings and Queens are usually more interesting than those of their

obscurer contemporaries. Other Elizabeths may have existed, as great and as small as the last of the Tudors ; but who would have found it worth his while to chronicle, in merciless minuteness, their foibles, their faults, their passions, and their caprices ? The searchlight is turned upon her only because she sat upon a throne. There are women whose blotted records might have vied in interest with Mary Stuart's had any one cared to make a study of them. Other nurseries, other schoolrooms, might present features as curious as the nursery and schoolroom of the children of Henri-Quatre ; but it is safe to say that few, if any, have been laid, to an equal degree, open to inspection.

To those attached to the household of the boy who was first Dauphin, and afterwards Louis XIII.— to Maitre Jean Heroard, his domestic physician, in particular, whose journal furnishes so much information —their charge was naturally the central figure. His companions and attendants, the princes, nobles, ministers of State, who visited him, were no more than accessories, viewed in relation to the child whose likes and dislikes, precocious sagacity, impulses of generosity or anger, and melancholy comprehension of the anomalies around him, are carefully portrayed. Even the King, the great soldier, a chief factor in the destinies of Europe, is merged in the father. Yet, so long as he lived, it is Henri himself who must necessarily, to us who look back, occupy the front of the stage from which he is never long absent. His children, he once told Sully, were the prettiest in the world, and his happiest hours were spent in playing

with them. During the first nine years of Louis's life we watch his father at this pastime, and are admitted to the vie intime of the King.

Those nine years were, outwardly, the most tranquil of Henri's storm-tossed existence. Yet treachery was all around him. Danger was in the air ; and the Bearnois, gay, debonair, pleasure-loving, a man who loved life and would fain have seen good days, recognised, intermittently, his peril, and knew that the assassin lay in wait. Again and again he showed the consciousness that death was ready to spring upon him ; and, ever prepared to face an open enemy, the presence of a veiled doom, the memory of prophecies of evil, haunted his imagination with a vague dread. The catastrophe which justified those fears lends pathos to the story of his intercourse with the son who was soon to be called upon to fill, inadequately, his father's place.

The four years of Louis's minority, following upon the death of Henri-Quatre, contain the story of the warring passions, the jealousies, ambitions, and hatreds surging round the poor child who was the nominal head of the State, and was already condemned to experience in some sort the loneliness belonging to sovereignty. During his father's lifetime the strong hand over him, the severity combined with the love, supplied at least one wholesome element to his training. Henri gone, he was the prey of flatterers, or of those who sought to make capital out of his weakness. Traces of healthy and close companionship, of familiar intercourse on equal terms, are rare. Signs of strong affection, giveji or received, are rarer still.

His mother, in her heavy, undemonstrative fashion, may have loved him—the fact has been questioned. It is certain that her tenderness afterwards centred on her younger son. On the other hand, any sign on Louis's part of a preference was a danger-signal, menacing the power of those who hoped to rule through him, and a reason to compass, if possible, the removal of the object of his likftig. In some dim way the boy recognised the fact.

" They want to take him away because I love him/' he cried with tears, when Alexandre de Vendome was to be sent out of the country. Louis, as he once said of himself, was not u grand parleur," but the complaint, finding vent in a moment's passion of sorrow, points to a grievance felt and resented at other times in silence by the boy whose unwise clinging in after years to worthless favourites indicates a special craving for affection and companionship.

No attempt is made in this volume to read the man into the child, or to interpret his early years by the light of what followed them. To readers who may desire to pursue the story, and to trace in Louis's afterlife the results and consequences of his training, the means of doing so lie ready to their hand, both in the memoirs and records of his contemporaries and in the works of later writers. These pages are concerned alone with the boy Louis, Dauphin and King— a small, helpless figure standing out against the sombre background of intrigue, violence, passion, and treachery by which he was surrounded.

Progress of Biron's conspiracy—The traitors at Saint-Germain— Biron's letter—Henri ready to pardon him He refuses to admit his guilt—Is arrested—The King and Madame de Verneuil at Saint-Germain s pp. 37-47

Marriage projects—The Chevalier Guidi at Court—Difficulties with the Queen—The Dauphin's fear of parsimony—Betrothal of the Due de Vendome—Don Pedro de Toledo's mission . . pp. 144-160

Louis's Accession—The scene in the Parlement— Sully at the Louvre —The Queen as Regent—The King's fears—Claims of the Comte de Soissons—Burial of Henri-Quatre—Louis proclaimed . pp. 213-225

The year 1612—The Spanish marriages finally arranged—Truce with the Princes—Signature of the marriage contracts—The Due de Belle-garde and the magic mirror—Death of the Comte de Soissons—Louis in disgrace pp. 268-282

Murder of the Baron de Luz—Its motives and its effects at Court— Marie reconciled with the Guises—Louis intervenes in a criminal case —His spirit of justice—d'Ancre in temporary disgrace—He is made Marshal of France —Peace or war ? pp. 283-294

The Prince and his friends leave Paris—Nevers seizes Mezieres — Contrary counsels—Cond6's manifesto— Negotiations —Uneasiness at Paris—Louis at the Council-board—Peace signed— Vendome rebellious —The Prince at Poitiers—Court to go to Orleans . . pp. 295-308

The journey—TheTrince de Cond6 loses strength—The pleasures of the road—Louis as bon compagnon —The Court at Orleans, Tours, Poitiers, and Nantes—Vendome makes his submission— Return to Paris—Louis's majority pp. 309-320

LOUIS XIII. AT THE AGE OF THREE 62

LOUIS XIII. AND THE REGENT 226

THE MAKING OF A KING

IT was September 1601. The Court was at Fontainebleau. Paris was on its knees. The devotion of the Forty Hours was going on, and the people thronged the churches. Those little given to prayer prayed now, for a momentous issue was at stake. Was France, by the mercy of God, to be granted, at long last, an heir to the throne; or was her tranquillity, her future, to continue to be dependent on the slender thread of a single life ? Would the child whose birth was awaited fulfil the hopes and longings of the nation, or were those hopes and longings destined to be disappointed ? The question was on the point of receiving an answer.

At the palace all was prepared for the welcome to be given to a Dauphin. Henri-Quatre loved Fontainebleau, where the event was to take place. There

he hunted ; there he spent leisure hours devising additions to the mass of buildings successive centuries had contributed to erect. Portions of the palace begun by Francis I. had been finished by him ; fresh features had been added. He had built the Galerie des Cerfs, where the grim tragedy of Monaldesco's murder was to be enacted some fifty years later. He had fashioned the lake south of the Cour des Fontaines and the canal running the length of the park. And to the great oval chamber where his son was now to be born he afterwards added, in commemoration of the day, the Porte Dauphine.

The Princes of the Blood—so troublesome and turbulent an element in the history of France — had been bidden to Fontainebleau, that they might be witnesses, according to custom, of the birth of the King's son. The Prince de Conti, by reason of his infirmities a negligible element in political life, was at the palace, as well as his more important cousin, the Comte de Soissons. The Due de Montpensier, Mont-morency, Constable of France, with a crowd of other nobles, were in attendance ; Catherine, Duchesse de Bar, the King's only sister, was there, and the Duchesse de Nemours. And the nine-year-old Cesar de Ven-dome, son to Henri-Quatre by Gabrielle d'Estrees, whose succession to the throne of France had been hitherto considered not out of the range of possibility, was also keeping his father company. The post of Lady-in-waiting to the Queen was filled by Antoinette de Pons, Marquise de Guercheville — the same who had, before Henri's second marriage, been the object for a brief space of his wandering affections, and had