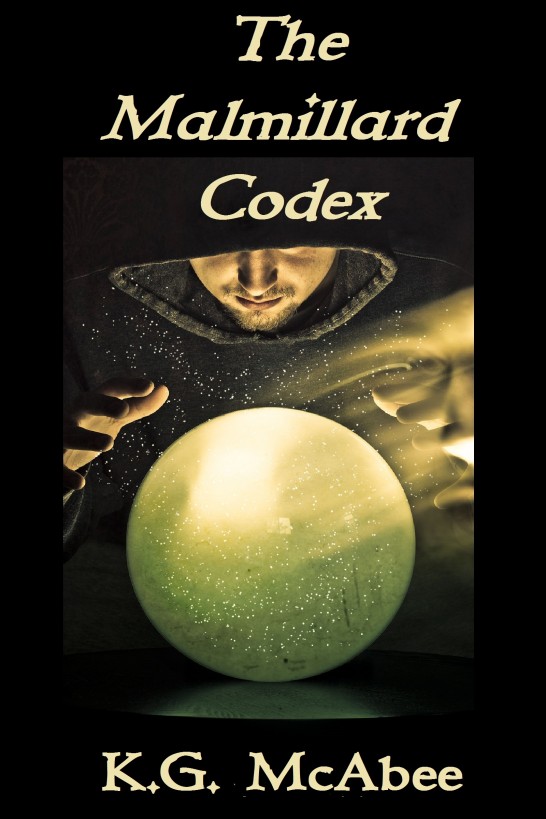 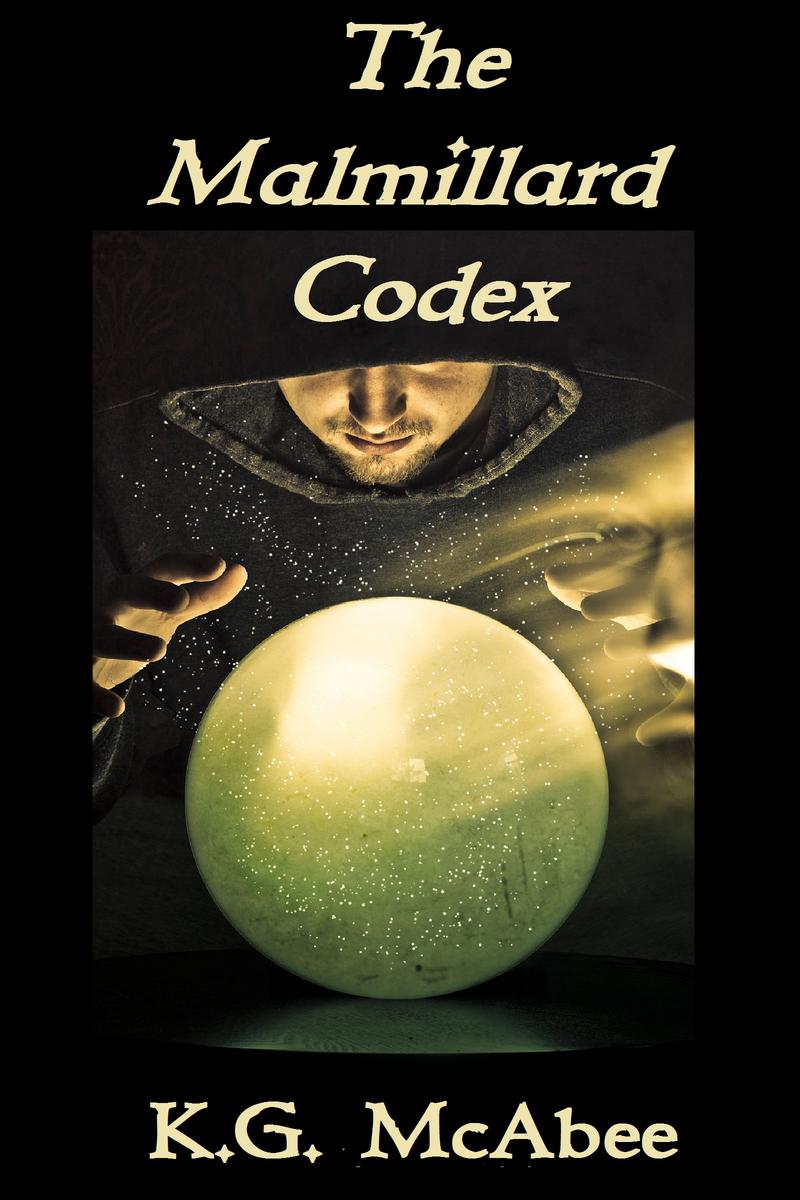 The Malmillard Codex
by K.G. McAbee

Thank you for downloading this ebook. This
work is the property of the author, and may not be reproduced,
copied, and/or distributed for commercial or non-commercial
purposes. If you enjoyed this book, please encourage your friends
to get their own copy at Smashwords.com, where they can also
discover other works by K.G. McAbee. Thank you for your support

Reviews for The Malmillard Codex

A fantasy filled with delightful
protagonists struggling to endure on a vividly described world of
magic.
~Midwest Book Review

Dark fantasy at its best.
~Fantasy,
Folklore and Fairytales

A note from the author:

Thank you for reading my story. I'd
appreciate it if you'd take a moment to write a review at
Smashwords and share your thoughts on my work. Feedback is always
great, and I love hearing from my readers. Thanks!

Other Works by K.G. McAbee

The Malmillard Codex
Chapter One

Behind him, he
could hear the hunting horns. Their harsh brays sent out slashing
spears of sound that raced through the forest, galloping past him
far faster than his own bare feet could trod the uneven ground.

What sounded to be a score or more of hounds
echoed the hunting horns' nerve-wrenching blare. He could just make
out the unruly animals yelping and howling as they jerked at their
leashes in excitement, eager to be let loose to follow the scent so
thick and rich about them.

Valerik listened to the death so close
behind him as he ran. Wincing when high dried grasses slapped
against his bare legs, leaving blood and slivers of skin caught on
briars and thorny bushes, falling and getting to his feet with
heart pounding, he ran. How long would he be able to continue at
this pace?

Already, so soon in the hunt that he could
still hear the hounds behind him, the breath was ripping through
his aching chest, sweat pouring down his naked body. Though the
early morning was still chill, the uneven ground holding fast to
swirling pockets of fog and mist, he knew the sun would blaze down
on his shorn head like a furnace by midday.

But midday was an unattainable goal, one
that Valerik refused to consider. None of the hunted had ever been
known to last so long as that. Midday was the promised land,
unattainable, imaginary.

His thickly muscled slave's body twisted and
turned as he raced through the dim forest. In the cool of the early
morning, the heat engendered by his frantic running rose from his
skin in clouds of steam—steam that reeked of fear and torment. His
questing eyes, ever moving, ever seeking a place of safety, were
wide and anxious, their nut-brown depths almost black in the grip
of insistent terror.

And always, in the back of his mind, the
pounding fear danced and gibbered, a constant unwelcome
companion.

As was death. He had no wish to die, though
he did not know who he was or why he'd awakened one day as a slave.
Had he always been one? He did not think so.

But now he would never know. His shreds of
memory would be ripped from his mind by hungry hounds' teeth,
slashed from his quaking body by swords and knives.

They had cut him lose just outside the
castle walls, where the trees crowded close to the ancient
stonework and the ground dropped off in a gentle slope towards the
denser forest that ringed the elevation where the castle perched.
Jerked from his straw pallet just before dawn, his scanty rags were
stripped from him to offer the dogs as scent. Then he stood with
arms outstretched as his manacles were struck away, leaving only a
leather collar around his neck for a leading chain. For his
tormentors, minions of his former mistress, the chain was a leash
to lead him through the long corridors and across the wide
courtyard to the open gate in the wall.

Valerik stumbled and fell twice, was whipped
to his feet the first time, then dragged breathless the second
before he managed to scramble up again. The second time he fell, a
thought raced through his mind like a galloping horse—why did he
bother rising? Why not lie here and let them beat him to death? It
would be easier in the long run.

But to his surprise, he found the desire for
life was strong inside him. He struggled up and followed the armed
men to the high barred opening in the stone wall.

Outside the gate, his new mistress, sister
of his old one, sat on a heavy roan stallion. The sun struck sparks
from her cruel barbed spurs as they shoved Valerik forward. He fell
on his belly at her feet.

"Slave," said the Lady Rivia in her
high-pitched, grating voice, looking down her long nose at Valerik
where he groveled on the muddy ground. "Slave, you have been
convicted and sentenced to death." The lady paused for a wide yawn,
her thick lips spread in a huge circle.

The sudden and violent death of her sister
did not seem to cause the Lady Rivia an overpowering burden of
sadness. The rumors abounded that Rivia had instigated the several
previous attempts on the late Lady Lerona's life. A pity none of
them had succeeded. If they had, doubtless some other poor fool of
a slave would be in Valerik's place now, and he would be shuffling
away, eyes averted, so as not to infect himself with the guilt of
the other.

Valerik hid a grin at the thought. His empty
belly chose that moment to growl and spasm, and he twisted on the
muddy ground.

The Lady Rivia resumed, her words rattling
out, her tone thick with disinterest and obvious boredom as the man
condemned to a frightful death lay before her. "In my mercy and as
proscribed by law I give you the chance to escape the justice meted
out to you. You have the time of one glass to gain a start.
Reon!"

Reon, the Lady Rivia's major-domo, lifted a
small hourglass in one hand and exhibited it to the mounted
freeborn and noble hunters, and to the gaggle of slaves that had
gathered together to hear the sentencing.

Valerik heard a gasp of dismay from the
unruly mob of house slaves just inside the gate. One said, in a
tone pitched in the lowest of undertones, to be heard by slaves
alone and not by their betters cavorting on prancing mounts, "The
glass is too small. Valerik does not stand a chance."

Valerik knew the slave was right. Of course
he didn't have a chance. What slave ever had a chance in the
hunt?

A flick of a horsehide lash stung his back.
He scrambled to his feet, eyeing the hounds warily. They sat at
their ease, tongues lolling, eyes disinterested. The mass of smells
that surrounded them shielded him—for now. Soon, though, the other
slaves would be dismissed, and his own discarded rags would provide
the hounds a scent to follow.

An hour was the proscribed time. The sands
in the glass held perhaps a third of that time, perhaps less. He
looked down the hillside to the trees. He was sure he could make it
to their cover. But afterwards?

Roads snaked through the forest; he knew, as
he'd come here along one, linked with other slaves in a long
clinking line. If he ran due west, and if he ran fast enough, he
was almost sure he'd cross a road.

He rose to his feet and took a deep breath
as the major domo raised the glass in the air. Reon held it there
for a heart stopping time. One of the hunters—it was Lord Arcon;
Valerik had served him wine not two days gone, and received a smile
as reward—leaned over and idly flicked at Valerik's bare back with
his riding crop. Valerik gasped as each of the two dozen lashes
he'd received last night screamed in protest.

"Enough," said his lordship lazily. "Turn
the glass. And be sure that breakfast is hot when we return."

Reon grinned and turned the glass.

The undergrowth was thinning about Valerik
as he ran, the stunted trees growing larger and more twisted. His
frantic eyes jerked from side to side, in silent desperation
marking here a tree with branches sturdy enough to climb, there a
hole in which he might be able to lose himself before the hunters
could reach him.

Then, before his hurrying feet could slow or
dodge, before the sound of rushing water could warn him, a gushing
stream spread wide before him, deep pools interspersed with shallow
rocky stretches. Valerik plunged in, submerged his aching body, and
gasped as the icy mountain water came near to taking away what
little breath he had left in his straining lungs. With awkward
strokes he struggled to shallower depths, spluttering as he drew
great draughts of cold water into his burning throat, the water
battling with the air that he needed just as desperately. With
meticulous caution, he threaded his way over the slippery rocks to
the other shore, careful to leave as undisturbed as possible the
green slime that coated many of the stones.

His foot hit a steady-looking rock that
proved a lie and he stumbled to his knees, his heart racing. It
would not do to fall and break a leg at this stage of the game, so
soon, so close to the castle. Nor had he any wish to blaze so easy
a trail, a trail that any one of the hunters might follow with
little effort.

Valerik struggled up and onward.

The hounds were loose from their
leashes.

As he ran, Valerik could hear in the
distance the change in their yelps, a higher pitch of intensity and
eagerness. The cries they made showed how much the hounds, no less
than the hunters, were determined, striving with all their might to
find their quarry and rip it to pieces.

He increased his pace as the breath whistled
through his nose and inflamed his already raw throat; his soaked
skin dried as he ran, the air rushing over him to snatch sweat away
even as it formed on his naked, aching body. Valerik topped a rise
and dared a quick glance behind him, then slithered down the brushy
bank and came to a stop, his heart in his mouth.

A segment of rough and rocky road snaked
around a bend on his right and disappeared into the density of the
forest to his left. Deep ruts full of muddy water littered its
uneven surface, remnants of a late night shower that gleamed like
lost jewels in the fragmented rays lancing through leaf-dappled
branches.

Warrior Betrayed: The Sons of the Zodiac 3 by Addison Fox
1956 - There's Always a Price Tag by James Hadley Chase
Out of Oblivion by Taren Reese Ocoda
AlphainHiding by Lea Barrymire
The Wild Boy and Queen Moon by K M Peyton
The Slaver Wars: First Strike (The Slaver Wars Book Four) by Weil, Raymond L.
The Pirate and the Puritan by Howe, Cheryl
Temptation (A Temptation Novel) by Hopkins, Karen Ann
2nd Earth 2: Emplacement by Edward Vought
The Story of a New Name (The Neapolitan Novels) by Ferrante, Elena
Our partner