Read The Man in 3B Online 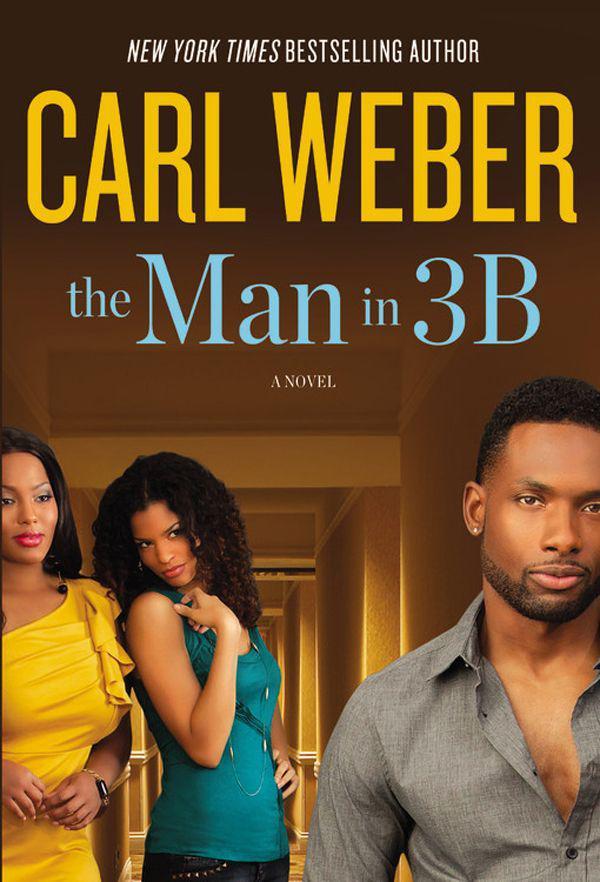 A Preview of
The Choir Director 2: Runaway Bride

This book is dedicated to my grandmother, Sarah Weber, who will be one hundred years old in June 2013. I love you, Nana.

First off, I’d like to thank all the people at Grand Central Publishing for the warm welcome, especially my new editor, Latoya Smith, and the director of publicity, Linda Duggins. Moving in any capacity is difficult, but you’ve made the transition very pleasurable.

Next, let me thank the woman who orchestrated the deal, my good friend, second mom, and agent, Marie Brown. We’ve worked together for almost fourteen years, and I hope you know that I not only value your opinion, but most importantly, your character. I love you, Marie. Thanks for being there when times were tough and others weren’t around.

I’d like to thank Martha Weber and Joylynn Ross for all your help in getting
The Man in 3B
finished. This may have been the toughest project I’ve attempted. Without your late-night hours reading and editing, I might not have ever finished.

Oh, and let’s not forget you, the reader. Without you, I’d be nothing, so thanks. See you in a few months for
The Family Business 2
. Enjoy.

It was one of those muggy Indian summer nights, where Detective Sergeant Dan Thomas of the 113th Precinct in Queens sat at his desk thinking about his latest case. He was now in his third hour of overtime, and it didn’t look like he was going home anytime soon to splash around in his new pool with wife number two as he’d promised. He’d just left a horrific crime scene, where a local man had been found dead in his apartment, burned beyond recognition. Both his partner and lieutenant had already come to the conclusion that this was probably some unfortunate accident, or perhaps even a suicide, but Dan’s gut told him different. It told him this was a homicide, and in all his years on the job, his instincts had never led him astray. So instead of heeding the advice of his lieutenant and letting the case go until morning, Detective Thomas sent his partner to the fire marshal’s office to see if she could find out the exact cause of the fire. He also had a couple of uniformed officers bring in some of the dead man’s neighbors for routine questioning. Maybe one of them would be able to shed light on the situation. Thus far, they’d only turned out to be concerned citizens, singing “Kumbaya” and praising the deceased as if he were the next messiah, but Detective Thomas wasn’t convinced.

Nobody’s this well loved,
he thought.

“Dan,” his partner, Detective Keisha Anderson, called as she entered the squad room waving a folder. She was panting, as if she’d literally run the entire way from the fire marshal’s office. “I gotta give it to you, partner. Your instincts were right on as usual. Fire
marshal said it was definitely not an accident. They can’t tell exactly what started it right now, but someone used an accelerant to start the fire so they could contain it to one room.”

Thomas nodded his approval. “Nice work, Anderson. Those idiots over at the fire marshal’s office usually take two weeks to get us anything relevant. What’d you do, promise to sleep with one of them?” Thomas laughed.

“Nope, promised you would,” his partner replied with a laugh of her own. “Big, burly guy named Sullivan. He said he likes to be on top, so you’re catching tonight, not pitching.” Thomas gave her the finger, and she shot back, “Hey, just thought you might wanna be prepared.”

Anderson handed Thomas the file, then sat on the arm of a nearby chair as she waited for him to read it. When he finished, Thomas looked up, trying to hide a vindicated smile that spread across his thin lips. He’d call the wife and tell her the pool would have to wait. Once again, his intuition had been spot-on.

He looked over at his partner.

“So where do we go from here?” she asked as Thomas got up from his chair.

Thomas didn’t say a word. He gestured for Anderson to follow him as he headed toward another room. Once inside, he pulled back a curtain that revealed a large picture window, which served as a two-way mirror.

“You wanna know where we go from here, Anderson?” Thomas asked as he stared at the five people sitting on the other side of the glass. “For starters, we’re going to drill each one of them until we find out who the murderer is.”

Walking away from the glass, Thomas retrieved a small notepad from his suit jacket and began flipping through pages. His partner watched the five suspects. They were all eating fried chicken from Popeyes and drinking soda and coffee ordered by the lieutenant and paid for by New York City taxpayers.

“I don’t know, Dan. They all look like one big, happy family.” She shrugged. “What makes you think one of them is a murderer? I mean, there’s still the possibility of suicide.”

“Possible, but not probable. This guy didn’t kill himself, and my gut tells me one of them did the job for him.”

Thomas walked back over to the window next to Anderson, and they observed the group on the other side.

“What do you mean? What do you see that I don’t? To me they all look pretty normal, more like the guy or girl next door than killers.” Anderson’s eyes went from the group to Thomas and then back to the two-way mirror again.

“Maybe, but you’ve been on the job long enough to know that looks can be deceiving. I see five people who are hiding something.”

“If you had just lost a member of your ‘big, happy family,’ as you put it, would you still be sitting here, smiling and laughing while enjoying your food? Or would you be genuinely broken up about it?”

She scanned the group again. “Yeah, I guess you’re right. I never thought of it like that. The only one remotely upset is the kid.”

“Mm-hmm,” Thomas said. “It’s like when the troublemaker of the family dies. Everyone shows up at the funeral for protocol. Do you see any tears being shed for that man in there, Anderson?”

“Nope, I haven’t seen anything more than a few crocodile tears. All I see is a bunch of people getting fat on the city’s dime.” She folded her arms. “So, who do you think looks good for it? They can’t all be in on it.”

“No, but my guess is that it’s one of the two ladies. A gruesome murder like this could only be a crime of passion. It’s not an easy thing to light a person on fire and burn them to a crisp. Not unless you really hate them.”

Anderson nodded her agreement. “Which one?”

“Take your choice.” Thomas glanced down at his notepad, then at the very scantily clad woman at the end of the table. “The neighborhood gossip said the deceased had a history with them both. Word is the pretty young thing over there is a schoolteacher, but I ain’t never had a teacher who looked like that.”

“Me neither. What was her connection to the deceased?”

“From what I’m hearing, jilted lover.”

“Now that, my friend, would give her motive,” Anderson reasoned. “But if that’s the case, why are you even looking at the other one?”

“You mean the fat ass?” Thomas said without missing a beat.

“Dan!” Anderson snapped at his lack of political correctness, then added under her breath, “Although she does have one hell of a donkey butt.”

“No, I’m not saying she’s a fat ass. That’s what the deceased called her in front of the entire neighborhood this morning.”

“Damn. I’d kill a motherfucker for that shit myself.”

This time Anderson managed to get a laugh out of Thomas. “Exactly my point.”

Anderson shook her head and then moved on to the next suspect. “If I had to put my money on somebody, I’d put it on him.” She pointed at the handsome man sitting next to a young college-aged kid. “You do realize that Cliff Huxtable over there is a fireman. And who would know more about setting a controlled fire than him?”

“Nobody, except maybe a fireman’s son.” They both turned toward the boy.

“Mm-hmm, and so was the Craigslist Killer. That same gossip I spoke to said that he and the deceased spent a lot of time together in the deceased’s apartment—until they had a falling out.”

“What about him?” Anderson pointed to a thin, light-skinned man in his late twenties wearing a well-tailored suit and a silk tie. He had a plateful of chicken in front of him but never took a bite. “Why does Mr. Shirt and Tie look so nervous?”

“Him? Not sure, but he’s the jilted lover’s current boyfriend, and I hear him and our victim had a lot of beef over the girlfriend.”

“Ohhhh. I’ve handled more than my share of love triangle cases. He could easily turn out to be our number one suspect.” She shook her head uncertainly. “I just don’t know, though…”

“What’s there to know?” He looked his partner in the eye. “Like I said, one of those people in that room is a murderer. Now all we have to do is figure out which one.”

I stepped off the bus and briskly walked the eight blocks home, carrying two heavy shopping bags filled with groceries for my husband’s birthday celebration, for which I planned to go all out. I could have gotten off the bus at the corner of Guy R. Brewer Boulevard and 109th Street about a block from my apartment, but I’d heard some weight loss expert on
The Today Show
the other day explaining how if you get off one stop before yours and walk the rest of the way home every day, you can lose up to ten pounds per year. Sounds crazy, right? I’m not even saying that I believed her, just that I was so desperate to lose the fifty-plus pounds I’d gained after my wedding that I was willing to try anything. I’d tried every diet book, tummy-buster DVD, and weight loss infomercial gimmick there was, all with no results. With money being so tight now, walking was a lot cheaper than buying another set of DVDs or a gym membership.

I had to do something to lose this weight. I couldn’t even get my husband, Avery, to look at me in a sexual manner, and the Lord knows I missed his touch.

About halfway down my block I saw anchorwoman Nancy Williams staked out in front of my building, reporting the six o’clock news. Some folks watched CNN; others ABC or CBS; many got their news from 1010 WINS radio; but the women of my neighborhood got our local information from Nancy Williams and the 109th Street news team of gossips. Along with Nancy was her number one
investigative reporter, Lily Nixon, our building super’s wife. Nancy’s weather girl, Ms. Bertha Dunbar from 1B, could tell you the next day’s weather just by how her bones felt. They were surrounded by three other neighbors from our building and a couple of girls from across the street.