Read The Man in the Moss Online

The Man in the Moss 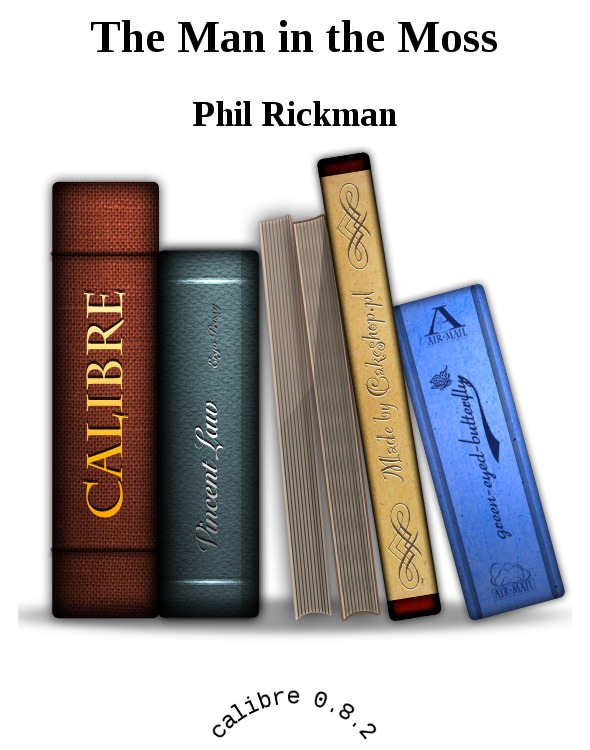 A cold midwinter fogbank
lay on the Moss.

It lay like a quilt on the
black mattress of the peat, and nothing moved.

Not even the village
schoolteacher standing on the promontory at the end of a ragged alley of graves
where the churchyard seemed to overhang the bog's edge.

Damp January was clamped across the teacher's mouth and nose
like a chloroform pad. He'd only been an hour out of bed, but the cold made him
tired and the sight of the Moss only made him feel colder.

It was, as he'd explained to countless generations of
pupils, the biggest surviving peatbog in the North of England, a gross product
of violent death and centuries of decay ... vast forests burned and torn down
by the barbarian invaders ... soaring greenery slashed and flattened and
transformed by time into flat, black acres bounded by the hills and the moors.

The peat was dead. But, because of its acids, the peat
had the power to preserve. Sometimes fragments of the ancient dead were found
in there, from iron-hard limbs of trees to the arms and legs of corpses (which
were taken away by the villagers and quietly buried).

Inside his long, deeply unfashionable overcoat, the
teacher suddenly shivered. Not at the thought of the corpses, but because he
was waiting for the piper.

The piper on the Moss.

The sad, swollen drone, the bleak keening of a lost soul,
had reached him on a sudden, spiked breeze during his habitual morning walk
before school.

And he'd stopped, disquieted. The air had been still, weighted
by the fog; no breeze at all except for this single, quick breath. As if it had
been awoken only to carry the message that the piper was on the Moss.

This worried him, for the piping was never heard in
winter.

As a rule, it came on summer evenings, when the Moss was firm
and springy and the sound would be serene, rippling along the air currents,
mingling with bird cries ... plaintive enough to soften the clouds.

But the piper did not come in winter.

Seeking reassurance, the teacher turned around, looking
for the soft blue eye of the Beacon over the village. But the fog had closed
the eye; he could not even make out the outline of the Norman church tower.

And while his back was turned, it began. A distant,
drifting miasma of music. Notes which sounded ragged at first but seemed to
reassemble somehow in the air and harmonize eerily with the atmosphere.

Cold music, then, with a razor-edge of bitterness.

And more. An anger and a seeping menace ... a violence,
unsuppressed, which thrust and jabbed at the fog, made it swirl and squirm.

Trembling suddenly, the schoolteacher backed away from
it; it was as if the fog and the frozen stillness of winter had combined to
amplify the sound. And the sound made vibrant, pulsing images in his head.

It was as though the sky had been slashed and the rain
bled from the clouds.

As though the cry had been physically torn from the
ruptured breast of a bird in flight.

Or the morning itself had been ripped open, exposing the
black entrails of another kind of night.

And then the piper himself came out of the fog with the
black bladder like a throbbing tumour under one arm, and the ground exploded
around him, a sound as dark as the peat under his plodding boots.

A black noise. The piper in a black mood.

'Why can't you keep away?' the teacher whispered. 'Why do
you have to haunt us?'

He pulled his hat over his ears to muffle the piping and
hurried away from it, back towards the church until the beacon's ghostly disc
emerged from the fog and he could see the vacant smile on the face of Our
Sheila who fingered and flaunted her sex on the church porch.

He rushed past her and into the church, shutting the
great oak door behind him, removing his hat and clamping it to his breast,
staring up at the Winter Cross, all jagged branches, blunted thorns, holly and
mistletoe.

He couldn't hear the pipes any more but felt he could
taste the noise - that the oozing sound had entered his ears and been filtered
down to the back of his throat where it came out tasting sourly of peat.

'Doesn't mean owt, does it?' he called out to the Winter
Cross. 'We'll be all right, won't we? Nowt'll change?'

And nothing
would
change for more than fifteen winters of fog and damp. But fifteen years in the
life of a Moss was barely a blink of the eye of God, and when the Moss revealed
what it had preserved ...
then
the
changes would come, too many, too quickly and too horribly.

And the teacher, in retirement, feeling the kiss of the
eternal night, would remember the first time the piper had appeared on the Moss
in winter.

Meanwhile, later that week,
the fog would lift and there would be snow.

Coughing. Coughing at nothing. For as long as she could
remember, hostility had occasionally come to her like this ... like a single,
piercing puff from a poisoned perfume spray.

But nothing there, really.

There were maybe twenty of them, but it was mostly OK,
wasn't it? Mostly warm wishes and appreciation? Just never happened to her
before. One of them had his jacket off, eyeing her. He was grinning and
mumbling.

'Get used to it, lass.' Matt Castle grinning too. 'This
is only the start of it. For you.'

Now the guy was rolling up a chequered shirt sleeve in
the sub-zero night, handing her this thick black felt-tip pen.

'Oh, your
arm
.' She tried to smile, printing her
name all the way up the soft, hairless underside of his forearm.

Usually it would be just a handful of enthusiasts,
harmless as train-spotters, chattering learnedly about the music and mainly to
Matt. Dropping away as they headed for the car park. Shouting, See you again ...
stuff like that, mostly to Matt.

You should be loving this, hen, she told herself. Real
fans. Can you believe that? You're a star.

Willie and Eric were loading the gear into Matt's old
minibus, wanting to be away - more snow on the way, apparently. Two girls in
leather jackets held open the back doors for the tea chest Willie kept his
hand-drums in.

She felt it again, back of her throat. Nearly choked on
it.

'Ta,' Eric said. Moira saw Little Willie sizing up the
girls for future reference. Tonight, she knew, he was worried he wouldn't get
home across the Moss, if the snow came down.

Matt got into the driving seat, Eric slammed the back
doors and climbed in on the passenger side. One of the girls in leather - buxom
piece - opened a rear side door for Willie.

Willie rolled his eyes at her, gave her his most seductively innocent
grin. 'See you sometime, eh?'

Moira's throat was burning up.

The girl said, 'Yeah, I'll be around.' She held on to the
open door. 'Gina,' she said. The wire-caged light over the backstage exit threw
a grille of shadows on to her pale, puffy cheeks.

The first sparse snowflakes
hit the wet black asphalt and dissolved. Moira, tucking her long hair down her
coat collar, smiled at the girl, put out a foot to climb into the van next to
Willie.

And then the moment froze, like life's big projector had
jammed.

Moira turned in time to see the girl's eyes harden,
glazing over like a doll's eyes as she whirled - a big, clumsy dancer - and
flung the door. Like the door was a wrecking hammer and Moira was the side of a
condemned building.

Willie had seen it. With both hands, he had pushed her
back. She stumbled, fell over the kerb, the door connecting with a shuddering
crunch and this girl, Gina snarling, '
Bitch
...',
voice as deadly cold as the grinding metal.

And then the door reopened and Willie was hauling her in
and snatching it shut behind her, the girl screaming, 'Go on ... feather your
own nest, fucking cow!' And beating on the panel into Moira's ear as Matt
started the engine and pulled urgently away into the unheeding, desultory night
traffic.

'Jesus,' Willie Wagstaff said. 'Could've had your fingers
off.'

'Screw up ma glittering career, huh?' White face in the
streetlight and a rasp of Glasgow giving it away that Moira was pretty damn
shocked. 'Couldny play too well wi' a hook.'

Matt said mildly, 'Don't let it bother you. Always one or
two. Just jealous.' The snow heavy enough now for him to get the wipers going.

'Wasny about envy.' Moira had her guitar in her arms.
'I'm no' exactly popular with your fans any more is the problem.'

'You're in good company,' Matt said. 'Look how the
purists shunned Dylan when he went over to rock and roll.'

'Called me a traitorous cow.'

Matt
said. 'We've been over this.' So damned
nonchalant
about it. He seemed so determined she shouldn't feel bad that she felt a sight
worse.

Eric, the mournful one who played fiddle and twelve-string,
Eric, the mediator, the peacemaker, said, 'Weren't a bad gig though, were it?'

'Was a grand gig,' Moira said. Good enough, she thought,
heartsick, to be the start of something, not the end.

Least her throat wasn't hurting so bad. The guitar case
was warm in her arms. The snowflakes began to suck and cluster on the side
windows as Matt drove first to Eric's house at Ashton Under Lyne, where Willie
had left his Minivan. They switched the drum chest to the back of the little
grey van, and Willie said, 'I won't mess about. If it's snowing like this down
here it'll be thick as buggery over t'top.' He hung his arms around Moira's
neck and gave her a big kiss just wide of the lips. 'Ta-ra, lass. Don't lose
touch, eh?'

Then Eric kissed her too, mournfully, and by the time she
got into the front seat next to Matt she was in tears, both arms wrapped around
the guitar case for comfort.

'This is the worst thing I ever did, you know that.
Matt?'

There was silence. Just the two of them now, for the last
time. Time for some plain talking.

'Don't be so bloody daft.' Still his tone was curiously
mild.

'She was right, that slag, I should have ma fingers
chopped off.'

'Listen, kid.' He tapped at the steering-wheel. 'You made
one sacrifice for this band when you threw up your degree course. That's it. No
more. Don't owe us nowt. It's been nice - cracking couple of years, wouldn't've
missed it. But you're not even twenty-one. We're owd men, us.'

'Aw, Matt...' Could anybody be
this selfless?

'Gone as far as we're going.
Think I want to be trailing me gear around the country when I'm sixty? No way.
It's a good get-out, this, straight up. For all of us. Eric's got his kids,
Willie's got his...'