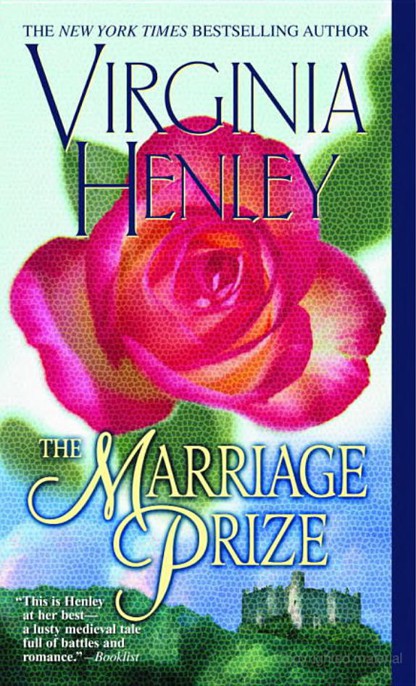 The Marriage Prize—the third novel in her Plantagenet trilogy,

which began with The Falcon and the Flower and continued in

The Dragon and the Jewel—this incomparable storytel er

passionate it wil take your breath away. Orphaned at a young

age, Rosamond Marshal is a royal ward of Eleanor de

Montfort, sister of King Henry I I and wife of the renowned

tutelage, Rosamond learns not only the skil s of a chatelaine,

but how to wield her female power by dressing exquisitely,

conversing wittily, and charming men mercilessly. As she

reaches young womanhood, the beautiful heiress is fearful of

leaving the security of the de Montfort household and fulfil ing

her betrothal to the powerful bachelor knight Rodger de

none of Rosamond's excuses to forestal her marriage. For

the prince is determined to reward Rodger, his dearest friend,

with a wealthy, noble wife.

Slowly Rodger woos Rosamond, convincing her that his love

extends beyond her estates and her wealth. But no sooner

herself and her husband on opposite sides of a bloody civil

war. For Rodger is fighting alongside Prince Edward and the

king to quel the barons' rebel ion, led by none other than

King Henry I I

Countess of Leicester of King Henry I I and Richard of

King Henry I I Plantagenet King of England

Queen Eleanor of Provence Queen of England (wife of Henry

Richard of Cornwal Brother of King Henry I I and

Harry of Almaine Son of Richard of Cornwal and the late

half-brother of Harry of Almaine

library. The young girl was dressed in a plain gray mourning

gown, and her face was as pale as the linen head-cloth that

covered her fair hair. Her eyes appeared to be too large for

her smal face, and she looked at the people in the room as if

she did not real y see them. Rosamond was in shock. Three

days ago, her brother Giles, who had been al of fourteen

years of age, had been kil ed in a jousting accident.

When Rosamond felt Lady Eleanor squeeze her hand, she

sank into a curtsy before King Henry, who was her royal

Montfort, was standing beside the king, and Prince Edward,

the fifteen-year-old heir to the throne, waited to one side with

The official document that would betroth Lady Rosamond

awaiting only the signatures of those present in Kenilworth's

library. Lady Eleanor picked up the quil pen, dipped it into the

inkwel , and handed it to Rosamond. "Sign here, my dear."

Without even glancing at the youth to whom they were

betrothing her, the royal ward took the pen and signed the

document as if she were in a trance. She had withdrawn to a

place deep inside of herself in order to escape the

unbearable pain caused by her brother's death. Because the

young heiress was now alone in the world, everyone had

thought it best to betroth her to a suitable husband. Rosamond

went through the motions of the betrothal, accepting her

the betrothal document. He was darkly attractive and his

green eyes held a serious look that befitted the solemn

occasion. De Leyburn's manner showed that he was perfectly

wil ing to betroth Rosamond Marshal, yet he did not appear to

be eager. Then the long, the prince, and the de Montforts

affixed their signatures to make it official. Lady Eleanor and

Rosamond were the first to leave, and when the library door

closed behind them, Edward turned to his friend and said,

"Rodger, you won't regret this; Rosamond Marshal is a great

The young heiress most certainly was a sought-after prize.

King Henry had wanted Rosamond for his foreign half-

brother's son, Geoffrey of Valence. But Simon de Montfort had

more English heiress was given to a foreigner. Simon had

squandering money, land, and castles on his foreign relatives.

So Henry had grudgingly al owed his son Edward to choose

For the next five years, King Henry wil ful y ignored the growing

anger of the barons. He appointed foreigners to high office

money, making promises he had no intention of keeping.

Final y, the barons had had enough. Choosing Simon de

Montfort as their leader, they issued King Henry an ultimatum:

Either he transferred the authority to govern to a council of

leading English peers, or there would be civil war.

Provisions of Oxford, which laid out the barons' demands. The

king's half-brothers, who had been living in luxury, fled back to

the Continent, and the barons believed they had saved

England from ruin. Flush with their victory at Oxford, the

Marcher barons left to subdue an uprising in Wales. Prince

the campaign, and Henry of England took himself across the

Channel to sign a treaty with Louis of France over disputed

provinces. But at the first opportunity, Henry intended to take a

major step toward reasserting his authority at home—he

Provisions of Oxford. He would show the barons who ruled

England. The king, and the king alone!

A wave of stark terror swept over Rosamond Marshal,

snatching her breath away. She began to run the moment she

saw the dark horse and rider, knowing instinctively they would

pursue her. Relentlessly! The rider was faceless. Al she knew

was that he was dark, but it was the horse she feared most. It

was huge, black, and terrifying.

An icy shiver slithered down her spine. Her pale golden hair

tumbled wildly about her shoulders as she pul ed her skirts

being trampled by the cruel hooves. Her lungs felt as if they

carry her to safety. Her pulse hammered inside her eardrums,

deafening her as she turned to look over her shoulder.

Rosamond's eyes widened in horror and a scream was torn

from her throat as she saw the black forelegs rise above her,

then helplessly she tumbled beneath the murderous hooves.

her surroundings. She was lying in her bed, her hair a wild

tangle, her night rail twisted about her body so that her long

legs were bared. Heaving a ragged sigh of relief, she sat up.

asked, throwing back her covers and padding barefoot

across the spacious bedchamber they shared at Kenilworth

Rosamond tossed back her hair in a gesture of dismissal to

reassure her young friend. "It was nothing, Demi."

"But you screamed," the young, dark-haired girl insisted.

"Was it the old nightmare come back to haunt you?"

"No, of course not," Rosamond said. She was seventeen,

almost three years older than the Demoisel e, as everyone

young Eleanor de Montfort. The unusual nickname had been

given to her by a French nursemaid because mother and

daughter had the same name. Rosamond was determined not

to alarm her friend. She laughed with bravado. "It would take

more than a bad dream to frighten me."

"Could we have a light?" The Demoisel e had always been

afraid of total darkness, which was why Rosamond shared her

chamber, high in the Lady Tower.

"I'm so sorry I disturbed you, Demi." She lit the square,

scented candle in its metal stand and tucked the Demoisel e

back into bed. Back in her own bed, Rosamond offered a

silent prayer of thanks that she was safe and secure at

Kenilworth. Located in the midland county of Warwickshire,

eighty miles from London, the castle was her haven, her

refuge, where she felt protected from the harsh world.

Rosamond watched the shadows flicker upon the wal . She

she was free of it, but apparently she was not completely free.

Though Rosamond knew what caused it, she never spoke of it

Because her parents had both died while she and her brother

Giles were children, they had become royal wards. Since

Giles was the same age as Prince Edward Plantagenet, he

had joined the prince's household, becoming one of a dozen

however, had joined the household of the king's sister, Eleanor

de Montfort, Countess of Leicester, because Rosamond was

the niece of the late Wil iam Marshal, who had been Princess

The brother and sister had seen each other often because

godfather, and the young noblemen received their military

training from the great warlord, reputed to be the ablest

warrior in Christendom. By the time he was fifteen, Lord

Edward, as the heir to the throne was cal ed, had towered

head and shoulders over the other men of the court. His

Some of them were his cousins from Provence and Lusignan,

who thought themselves above curbs and restraints.

Though King Henry had forbidden them to joust, Lord Edward

ment. That was the fateful day that Giles Marshal had lost his

life in a jousting accident. Because Rosamond was only