Read The Meaning of Ichiro Online

The Meaning of Ichiro 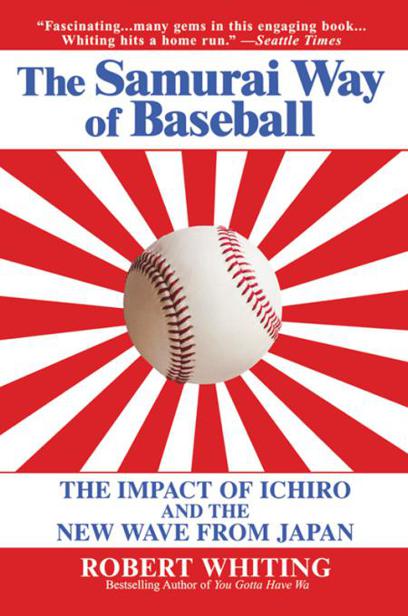 THE SAMURAI WAY OF BASEBALL

“Intriguing … destined to become as indispensable as Whiting’s classic
You Gotta Have Wa
.”

“Meticulous … offers rounded, human portrayals of players long made invisible by the constant mythologizing … Explores the
Japanese baseball invasion of the U.S. and its indelible effects on both nations.”

“An aspiring exploration of the power of sport to bridge differences and lead cultural change … Whiting has a knack for bringing
characters alive in a short space and weaving them into historical context. He also revels in finding the ironies in their
actions and conflicts, revealing them to the reader with wry humor.”

“Fascinating … THE SAMURAI WAY OF BASEBALL is a delightful and enlightening read, filled with interesting facts and stories.
What I enjoyed about the book is how Whiting interweaves little details into those stories.”

“A great book on baseball … incisive and thoughtful … With this dazzling display, Robert Whiting is a first ballot shoo-in
as a Hall of Famer among Japanologists … THE SAMURAI WAY OF BASEBALL is like having box seats in the World Series—memorable
and lots of fun. Crack a beer, sit back, and enjoy.”

“Brings into the light of shrieking clarity the near-maniacal degree to which many Japanese players have dedicated themselves
to the game.”

“Whiting writes about much more than Ichiro … more than anything else he illuminates differences between a disciplined and
a laid-back culture.”

“Fans of America’s national pastime … would do well to pick up [this book]. Whiting is the premier English-language writer
on Japanese baseball … [He] shines a light into the dark corners of the Japanese game … clean, straightforward, anecdotal.”

“Whiting is an expert in American-Japanese culture … He obviously knows the Japanese game.”

“The role of Asian players in the major leagues had not been well explored until the publication of THE SAMURAI WAY OF BASEBALL.”

“Fascinating reading … THE SAMURAI WAY OF BASEBALL is a fine introduction to Japanese baseball … solidly researched and well-written.”

YOU GOTTA HAVE WA

“The definitive book on Japanese baseball and one of the best-written sports books ever.”

“Bob Whiting has done it again! … A book that will please baseball fans and enlighten anyone interested in Japanese-American
relations.”

“Far more than a sports book … What you read … is applicable to almost every other dimension of American-Japanese relations.”

In memory of two old friends,
Greg and Dwight, who left too soon.

T
HERE ARE A NUMBER OF PEOPLE I’D LIKE TO THANK FOR HELPING
me with this book. In the research department, Kozo Abe of the
Fuji-Sankei
communications group kept a steady supply of information and checked facts coming my way; Miwako Atarashi of the Baseball
Hall of Fame and Museum in Tokyo
(Yaky

ku Hakubutsukan)
verified data and responded promptly and kindly to numerous requests I made for material, which usually required her digging
into nineteenth-century files; and my neighbor and old friend, the highly regarded baseball author and translator of
You Gotta Have Wa,
Masayuki Tamaki, as well as his wife, Kyoko, and members of his family, all provided numerous kindnesses.

Thanks to two of the world’s foremost authorities on the Japanese game who were generous enough with their time to check the
manuscript for factual errors (and they found more than I’d care to admit). One is ace Yomiuri columnist Jim Allen, the other
is Marty Kuehnert, foremost bilingual media commentator on
nihon puro-yaky

for three decades. Others who read the manuscript in whole or in part and provided helpful advice were Peter Miller, Elmer
Luke, Jeff Kingston, Mark Schumacher and Velisarios Kattoulas.

As always, I extend a big
arigato
to Midori Matsui, translator of
The Chrysanthemum and the Bat,
her husband, Kiyondo Matsui of
Bungei Shunju,
and to Satoshi Gunji of Kadokawa.

In Seattle, I’d like to thank old friends Doug and Noriko Palmer, Masayoshi Niwa of
Yeah
magazine and journalist James Bailey, who all provided insights into the Ichiro craze as well as life in Seattle in general.
Also special thanks to Bob Bavasi of Bavasi Sports Partners for his generosity.

ka of the New York Yankees. Rick Down. Don Zimmer. Kota Ishijima. Jeremy Schaap of ESPN, Gene Orza of the MLBPA, Marvin and
Terry Miller. Mark Ryckoff of
TIME.
Melanie Kirkpatrick of the
Wall Street Journal.
Dan Gordon. Richard Siracusa. Nick Pileggi. Clyde Haberman of the
New York Times.
And the merry band of souls at the Japan Society in New York. In Boston, thanks to Bill Givens and Ed Kleven. In Washington,
D.C., it’s Joe and Leith Bernard, Robin Berrington of the State Department, William R. Farrell and Patricia Kearns and Eri
Howard of the Japan-America Society.