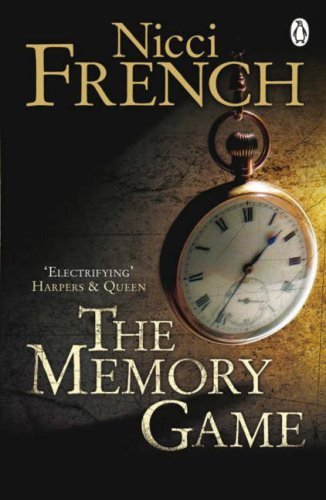 When a skeleton is unearthed in the Martellos' garden, others rattle ominously in their cupboards. For the bones belong to their teenage daughter Natalie, who went missing twenty-five years ago, and the murderer must be very close to home...
Does Natalie's childhood friend Jane - now divorcing her brother - hold the key to the mystery? And are all their memories of a golden girl at the heart of an idyllic extended family false?

Nicci French is the author of
Catch Me When I Fall
,
Secret Smile
,
Land of the Living
,
Killing Me Softly
,
The Red Room
and
Beneath the Skin
. She lives near Ipswich, England.

'Packs a damn good punch... an ingenious storyline
with plenty of twist and pace'
Daily Telegraph

'A treat - both intelligent and unputdownable'
Cosmopolitan

Nicci French is the pseudonym for the writing partnership of journalists Nicci Gerrard and Sean French. The couple are married and live in Suffolk.

There are now ten bestselling novels by Nicci French:
The Memory Game, The Safe House, Killing Me Softly, Beneath the Skin, The Red Room, Land of the Living, Secret Smile, Catch Me When I Fall, Losing You and Until It's Over
(the new hardback, published in May 2008).

Permission to quote from
A Shropshire Lad
by A. E. Housman is given by The Society of
Authors as the literary representatives of the Estate of A. E. Housman.

Except in the United States of America, this book is sold subject to the condition that it shall not, by way of trade or otherwise, be lent, re-sold, hired out, or otherwise circulated without the publisher's prior consent in any form of binding or cover other than that in which it is published and without a similar condition including this condition being imposed on the subsequent purchaser

To Edgar, Anna,
Hadley and Molly

I close my eyes. It's all there, inside my skull. Mist following the contours of the lawn. A shock of cold stinging in my nostrils. I have to make a conscious effort if I want to remember what else happened on the day we found the body; her body. The reek of wet, brown leaves.

As I made my way down the short slimy grass slope away from the house, I saw that the workmen were standing there ready. They were clutching mugs of tea and smoking and their warm, wet breath produced a cloud of vapour that rose up from their faces. They looked like an old bonfire that was being rained on. It was only October but this was early in the morning and as yet there was just the promise of sun, somewhere behind the clouds, over the copse on the far hill. I was wearing my overalls tucked a little too neatly into my wellingtons. The men, of course, were obstinately in the traditional rural proletarian costume of jeans, synthetic sweaters and dirty leather boots. They were stamping to keep warm and laughing at something I couldn't hear.

When they caught sight of me they felt silent. We'd all known each other for ever and now they were unsure how to react to me as their boss. It didn't bother
me
, though. I was used to men on building sites, even the miniature, domestic variety of building site like this one, my father-in-law's soggy patch of Shropshire, the Stead, as it was absurdly called, a self-mocking joke about rural squireship that had become serious over the years.

'Hello, Jim,' I said, holding out my hand. 'You couldn't resist coming yourself. I'm glad.'

Jim Weston was as much a part of the Stead as the treehouse or the cellar with its sweet smell of apples that lingered even at Easter. He was associated with almost every man-made object on the property: he had replaced and painted the window frames, spent searing August days stripped to the waist on the roof dealing out tiles. There would be a crisis, a growth on a wall, an electricity black-out, a flood, and Alan would summon Jim from Westbury. Jim would refuse, too busy, he would say. Then an hour later he would creak up the drive in his rickety van. He would contemplate the damage, tapping out his pipe and shaking his head sadly, and mutter something about modern rubbish. 'I'll see what I can do,' he would say. 'I'll try to patch something together.'

It was a matter of local folklore that Jim Weston never bought anything at list price and wouldn't buy anything at all if he could obtain it through favour or barter or through even murkier means in his own contribution to Shropshire's black economy.

When Jim had seen my plan for the new house, his face had fallen even further than usual, as if an architect's drawing was some newfangled invention for the benefit of mollycoddled fools like me from London who'd never got their hands dirty. I'd given a silent prayer of thanks that he'd never seen my original idea. This small house, an overflow space for the Stead, for all the children and grandchildren and ex-wives and so on that accumulate at the Martello gatherings, was the greatest offering I would ever make to the family, so I'd planned for them the dream house that I would have built for myself.

I had taken advantage of the relatively sheltered situation of the original site to conceive a structure of total clarity, nothing but beams, pipes, joists and plate glass, a functionalist dream: the most beautiful object I have ever drawn. I'd shown the plans to my soon-to-be-ex-husband, Claud, and he'd crinkled his brow and run his fingers through his thin brown hair and murmured something about it being really very interesting and well done, which meant nothing at all because this has been his reaction to virtually everything up to and including my announcement to him that I had decided that we should get divorced. I'd thought that his brother Theo at least might see what I was getting at. He'd commented that it looked like one of his old Meccano sets and I'd said, 'Yes, exactly, lovely, isn't it?', but he'd meant it as an insult. Then I had taken it into the presence of the Great Man himself, Alan Martello, my father-in-law, the patriarch of the Stead, and it had been a disaster.

'What's this? The metal frame? What about the thing that's going to be built around it? Can't you do a picture of that as well?'

'That
is
the building, Alan.'

He'd snorted through his grizzled beard. 'I don't want something that's going to have Swedish architecture critics buzzing round it. I want a place for living in. Take that piece of paper away and build it in Helsinki or somewhere far away like that and I'm sure a publicly funded committee will give you a prize. If we've got to have some bloody building in this garden - of which I'm far from being entirely convinced - then what we're going to have is an English country house, with bricks or dry-stone walls or some decent local material.'

'This doesn't sound like the angry young Alan Martello,' I'd said sweetly. 'New styles of architecture, a change of heart, isn't that the sort of thing you've always been keen on?'

'I like
old
styles of architecture. I'm not young. And I'm not angry any more, except with you. Replace that structuralist horror with something I'll recognise as a house.'

It was Alan at his most gruff, charming, flirtatious and I was grateful that he'd felt able to yell at me in the old affectionate way while I'd been in the process of divorcing his son. So of course I'd gone away and put together a plan of impeccably rural appearance, complete with a rather amusing gambrel roof. It was designed in the sense that you design the contents of your shopping trolley as you walk around Sainsbury's. The prefabricated frame construction house was Norwegian, though manufactured in Malaysia. Alan would at least have been grateful to know that the extraction of the raw materials probably involved the destruction of a small patch of rain forest.

'What's this up here, Mrs Martello?' Jim Weston had asked, jabbing at the plan with his pipe.

'Please call me Jane, Jim. They're the ridge tiles, set in mortar.'

'Hmm.' He'd replaced his pipe firmly in his mouth.

'What do you want to go messing about with mortar for?'

'Jim, we can't argue about this now. It's all arranged. It's bought and paid for. We've just got to put it together.'

'Then the footings, here and here, and then the hard core, then the damp-course and the damp proof membrane, then concrete and then the tiled ground floor on top of that. The rest is a matter of just joining it together.'

'Yes, unfortunately there was a Public Health Act passed back in 1875, so I'm afraid we're stuck with that.'

Now, at the beginning of the first day of work, Jim looked more like something that was growing in the garden than a man who had come to supervise, or pretend to supervise, work in it. His face had been left outside in all weathers and had attained a complexion like the rear end of a toad. Hair sprouted from his nose and ears like moss on an ancient rock. He really was old now and his job consisted of telling his son and his nephew what to do. Their job consisted of ignoring what he said. I shook hands with them as well.

'What's this about
you
digging?' Jim asked suspiciously.

'Only a spadeful. I just said I'd like to dig the first spadeful, if that's all right. It's important to me.'

I've been an architect for nearly fifteen years now, and whenever I work on a building, I have a rule, which amounts almost to a superstition, that I must be there to see the first spade being dug into the ground. It's a moment of pure sensual pleasure, really, and I sometimes wish that I could do it myself with my own bare hands. After months, sometimes even years, of drawing up the plans and the specifications and obtaining tenders and calming the nerves of the client and bargaining with some functionary in the planning department, after all the compromises and the paper arguments, it's good to go outside and remind myself that it's all about dirt and brick and fitting the pipes together so they don't crack in the winter.

Best of all are the ten- or fifteen-metre excavations which precede the really big buildings. You stand on the edge of a site somewhere in the City of London and peer down at a couple of thousand years of fragments of other people's lives. You'll see the suspicion of an ancient building, sometimes, and I've heard all the rumours of the contractors surreptitiously pouring concrete across an old Roman floor so that there's no nonsense about waiting for the archaeologists to give you the nod before the building goes up. We're constructing the spaces for our own lives on the squashed remnants of our forgotten predecessors and in a couple of hundred or a couple of thousand years they'll be building on top of our rusting joists and crumbling concrete. On top of our dead.

One More Kiss by Katherine Garbera
Pretense by Lori Wick
Bad Blood by Lorna Sage
Janie Face to Face by Caroline B. Cooney
It's A Wonderfully Sexy Life by Hope Tarr
The 30 Day MBA by Colin Barrow
On Wings of Eagles by Ken Follett
The Last Nude by Avery, Ellis
Big Girls Rock 1 by Danielle Houston
The Telling by Jo Baker
Our partner