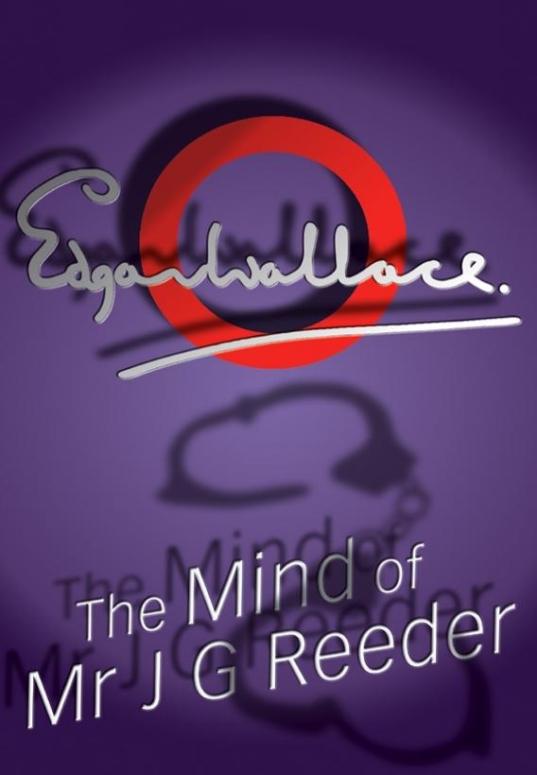 The Mind of Mr. J.G. Reeder

The right of Edgar Wallace to be identified as the author of this work has been asserted.

Edgar (Richard Horatio) Wallace
was born illegitimately in 1875 in Greenwich, London, to Polly Wallace, a minor actress who although married conceived Wallace through a liaison with a fellow player, Richard Horatio Edgar. He was initially fostered to George Freeman, a porter at Billingsgate fish market and later adopted by him.

At eleven, Wallace sold newspapers at Ludgate Circus and upon leaving school aged twelve took a job with a printer. Many other jobs followed until at nineteen he enlisted in the Royal West Kent Regiment, later transferring to the Medical Staff Corps and was sent to South Africa. Whilst in the army he started writing, short poetry at first, but quickly graduated to journalism by contributing articles to the Cape Colony press and was able to supplement his army pay. The army disapproved and after the publication of a short book of poetry,
The Mission That Failed
, he left the service in 1899 to became a correspondent for Reuters followed by an appointment as South African war correspondent for
The Daily Mail
. This came to an end when the Commander-in-Chief, Lord Kitchener, revoked Wallace’s press credentials after he scooped the story of the final peace treaty, which brought the Boer War to an end, and the
Daily Mail
was able to publish twenty four hours ahead of the official announcement. His various articles were later published as ‘
Unofficial Dispatches’.

Whilst in South Africa, Wallace married Ivy Caldecott, the daughter of a Wesleyan minister. Their first child died from meningitis in 1903, but a son, Bryan, was born the following year.

After a brief spell with the Rand Daily Mail, which ended after an argument with the proprietor, Wallace returned to London and resumed his association with the
Daily
Mail
, as a day-today reporter. By this time Wallace was heavily in debt after gambling on the South African Stock Market and also starting to lead the extravagant lifestyle to which it was clear he wished to become accustomed. Money troubles led him to commence work on his first full novel;
The Four Just Men
.

However, instead of proceeding conventionally, Wallace decided to embark upon a scheme which he believed would earn him a lot more. In 1905 he founded the
Tallis Press
, his own publishing company and decided upon a grandiose marketing and publicity campaign. Central to this was a competition he ran which invited readers to guess the solution to a conundrum – namely how the ‘Foreign Secretary’ had been murdered by ‘anarchists’ in the storyline. Extravagant prizes were offered by Wallace, to whom it never occurred that more than one person might win. He also underestimated production and publicity costs. Sinking even deeper into debt, he was bailed out by a large loan from Alfred Harmworth, the proprietor of the
Daily Mail
, who was concerned the bad publicity surrounding the events would harm the newspaper.

There then followed two libel actions involving the
Mail
in which Wallace was concerned – one of his own making after he had made up part of a story, and one involving a campaign Harmsworth was running against the soap manufacturers, Lever Bros. In the event, he was dismissed from the paper in 1907 and his standing in Fleet Street was so low no paper would employ him.By this time Ivy had given birth to a second surviving child, a daughter, and Wallace was effectively bankrupt, albeit not declared as such.

In 1909 he hit upon the idea of using some of his knowledge from reporting for the
Mail
in the Belgian Congo was as a basis for a series of short stories for a penny magazine. The initial batch, which were full of adventures of empire, a little patronising of native Africans, and contained strong characters, were a huge success and were eventually published in 1911 as
Sanders of the River
, the first of eleven such volumes.

Journalistic employment once again followed and Wallace also indulged in one of his great passions; horse racing. He both gambled and wrote about the subject and became tipster for various papers prior to starting two of his own. Another child was born to Ivy in 1916, but their marriage was failing and they were divorced in 1919. Shortly afterwards, Wallace married the daughter of a financier, Violet King, who had previously been one of his secretaries. They had a child, Penelope, in 1923. During the first World War Wallace had also served as a Special Constable at Lincoln’s Inn and as a special interrogator for the War Office.

Further writing success followed after
Sanders
and for the first time Wallace began to earn substantial advances for his work and royalties on a sliding scale. He wrote mostly thrillers, although there was a generous sprinkling of light comedy, romantic novels and science fiction, along with some non-fiction (such as ten volume history of the War) and it was once said that by 1928 one in four books read in England at the time were by him. His output was extraordinary and he would finish a standard length novel in less than a week. Many of his stories were filmed and he even became involved in directing.

His flamboyant lifestyle continued, however, and he was to be seen arriving at race meetings in a yellow Rolls Royce and to be heavily involved in gambling. Nonetheless, and possible because of a knowledge of his own failings, as chairman of the Press Club he thought about others when inaugurating a fund for impoverished journalists. In 1931, he stood for the Liberal party at the general election, opposed to the National Government, but the electors of the Blackpool constituency were not convinced and he was heavily defeated. Undeterred, he turned his sights towards America and accepted a job as a screenwriter with RKO Studios in Hollywood.

However, for some time his health had been causing him concern and the following year he was diagnosed with diabetes. Within days of this he died suddenly from double pneumonia brought about by the disease. At the time, he had been working on the film
King Kong.
His body was repatriated and he buried near to his home in Bourne End, Buckinghamshire.

One further surprise awaited relatives as it transpired Wallace’s estate was in fact heavily in debt – in death as in life - but continuing royalty payments eventually enabled this to be cleared and his daughter Penelope thereafter ran a successful enterprise based upon the literary estate.

Wallace completed 175 novels, over 20 plays and numerous short stories, in addition to some non-fiction and countless journalistic articles. Literally hundreds of films and TV shows have been made of his work (more than any other twentieth century writer) and he continues to be very popular with new generations of readers.

The day Mr Reeder arrived at the Public Prosecutor’s office was indeed a day of fate for Mr Lambton Green, Branch Manager of the London Scottish and Midland Bank.

That branch of the bank which Mr Green controlled was situated at the corner of Pell Street and Firling Avenue on the ‘country side’ of Ealing. It is a fairly large building and, unlike most suburban branch offices, the whole of the premises were devoted to banking business, for the bank carried very heavy deposits, the Lunar Traction Company, with three thousand people on its payroll, the Associated Novelties Corporation, with its enormous turnover, and the Laraphone Company being only three of the LSM’s customers.