Read The Minority Report and Other Classic Stories Online

The Minority Report and Other Classic Stories 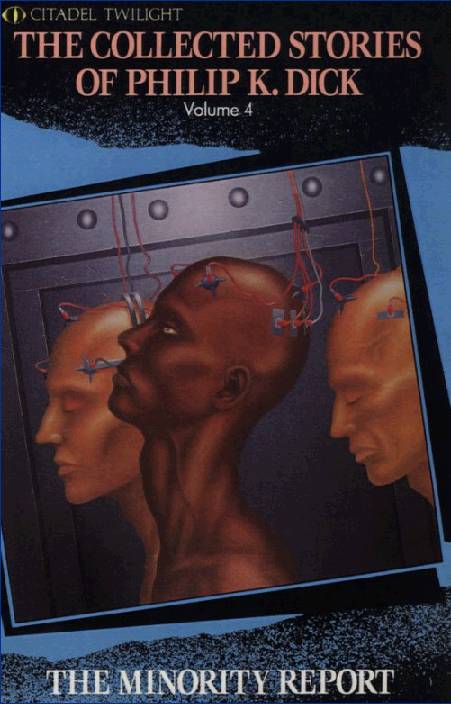 Annotation
Many thousands of readers consider Philip K. Dick the greatest science fiction mind on any planet. Since his untimely death in 1982, interest in Dick’s works has continued to mount and his reputation has been further enhanced by a growing body of critical attention. The Philip K. Dick Award is now given annually to a distinguished work of science fiction, and the Philip K. Dick Society is devoted to the study and promulgation of his works.
This collection includes all of the writer’s earliest short and medium-length fiction (including some previously unpublished stories) covering the years 1954-1964. These fascinating stories include “Service Call”, “Stand By”, “The Days of Perky Pat”, and many others.
The Minority Report
and Other Classic Stories
by Philip K. Dick
Introduction
by James Tiptree, Jr.
How do you know you’re reading Philip K. Dick?
I think, first and pervasively, it was the strangeness. Strange, Dick was and is. I think it was that which kept me combing the SF catalogs for more by him, waiting for each new book to come out. One hears it said, “X just doesn’t
think
like other people.” About Dick, it was true. In the stories, you can’t tell what’s going to happen next.
And yet his characters are seemingly designed to be ordinary people—except for the occasional screaming psychotic female who is one of Dick’s specialties, and is always treated with love. They are ordinary people caught up in wildly bizarre situations, running a police force with the help of the mumblings of precognitive idiots, facing a self-replicating factory that has taken over the earth. Indeed, one of the factors in the strangeness is the care Dick takes to set his characters in the world of reality, an aspect most other writers ignore.
In how many other science fiction stories do you know what the hero does for a living when he isn’t caught up in the particular plot? Oh, he may be a member of a space crew, or, vaguely, a scientist. Or Young Werther. In Dick, you are introduced to the hero’s business concerns on page one. That’s not literally true of the short stories in this volume (I went back and checked), but the impression of the pervasiveness of “grubby” business concerns is everywhere, especially in the novels. The hero is in the antique business, say; as each new marvel turns up, he ruminates as to whether it is saleable. When the dead talk, they offer business advice. Dick never sheds his concern that we know how his characters earn their bread and butter. It is a part of the peculiar “grittiness” of Dick’s style.
Another part of the grittiness is the jerkiness of the dialog. I can never decide whether Dick’s dialog is purely unreal, or more real than most. His people do not interact as much as they deliver monologs to carry on the plot, or increase the reader’s awareness of a situation.
And the situations are purely Dick. His “plots” are like nothing else in SF. If Dick writes a time-travel story, say, it will have a twist on it that makes it
sui generis.
Quite typically, the central gee-whiz marvel will
not
be centered, but will come at you obliquely, in the course, for instance, of a political election.
And any relation between Dick and a nuts-and-bolts SF writer is a pure coincidence. In my more sanguine moments, I concede that he probably knows what happens when you plug in a lamp and turn it on, but beyond that there is little evidence of either technology or science. His science, such as it is, is all engaged in the technology of the soul, with a smattering of abnormal psychology.
So far I have perhaps emphasized his oddities at the expense of his merits. What keeps you reading Dick? Well, for one thing, the strangeness, as I said, but within it there is always the atmosphere of
striving,
of men desperately trying to get some necessary job done, or striving at least to understand what is striking at them. A large percentage of Dick’s heroes are tortured men; Dick is expert at the machinery of despair.
And another beauty is the desolations. When Dick gives you a desolation, say after the bomb, it is a desolation unique of its kind. There is one such in this book. But amid the desolation you often find another of Dick’s characteristic touches, the
little animals.
The little animals are frequently mutants, or small robots who have taken on life. They are unexplained, simply noted by another character in passing. And what are they doing? They are striving, too. A freezing sparrow hugs a rag around itself, a mutant rat plans a construction, “peering and planning.” This sense of the ongoing busy-ness of life, however doomed, of a landscape in which every element has its own life, is
trying to live,
is typically and profoundly Dick. It carries the quality of compassion amid the hard edges and the grit, the compassion one suspects in Dick, but that never appears frontally. It is this quality of love, always quickly suppressed, that gleams across Dick’s rubbled plains and makes them unique and memorable.
James Tiptree, Jr.
December, 1986