Read The Mirror And The Maelstrom (Book 4) Online

The Mirror And The Maelstrom (Book 4) 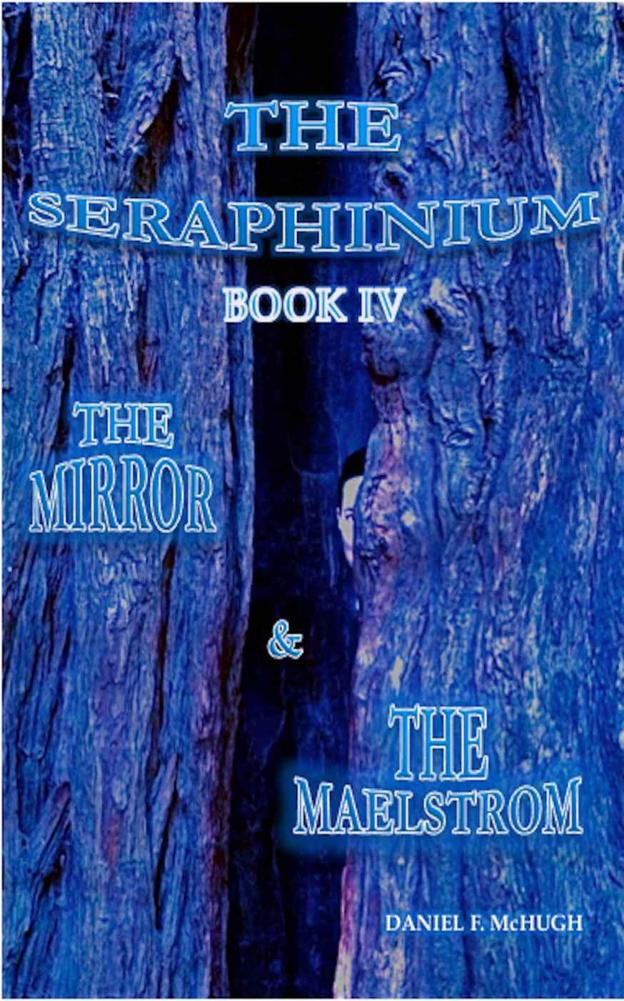 THE MIRROR AND THE MAELSTROM

All rights are reserved. No part of this book may be

used or reproduced in any manner whatsoever without

written permission from the author.

The Mirror and the Maelstrom

This book is dedicated to the person who

supports and motivates my crazy,

To my business partners in the real world,

who allow this diversion to gobble up so much time.

To all the early readers who offered support and constructive

criticism. Thanks for waiting so patiently for the finale.

Additional thanks to those early readers for their gracious 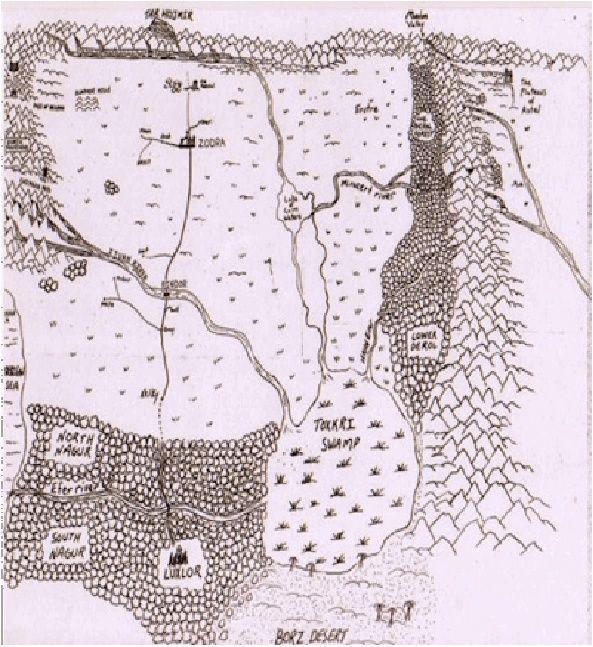 THE TREES AND THE NIGHT

Two groups struggle on a mission to rescue Lilywynn from the hands of the Ulrog.  A desperate horde of Ulrog pursues Kael, Ader, Eidyn and Sprig as the foursome races across the Eru plains toward the Mnim Valley. A band of Erutre Riders rescues the group moments before the stone men close in.

Granu, Vieri and Cefiz trek into the Scythtar Mountains unaware of their own dangerous pursuers. Woil the Lamentation follows the Keltaran prince and his companions into the Scythtar. The possibility of killing the Keltaran heir and taking custody of the new Seraph is too great a prize. Woil’s forces overtake their quarry at a crossroads beneath the summit of Tar Hdjmir. Vieri is lost in the ensuing battle. However, the scribe Nostr intervenes and rescues Cefiz and Granu.

Manfir and the Zodrian militia entrench themselves in a range of hills known as the Bear’s Knuckles. Prince Fenrel and the Keltaran Anvil are alerted to their presence and press forward to engage and destroy the Zodrians.

Teeg makes his way back south. Along the way he employs his gift of disguise to make contact with various elements of the underbelly of society. He gleans considerable information concerning the build-up of weapons in the capital of Zodra and the state of anarchy and subterfuge reigning in Rindor.

Cefiz and Granu hike to the heights of Tar Hdjmir. They come upon a sealed cavern in the mountain’s wall. Nostr appears and opens the chamber. The men discover the tomb of Awoi. An epitaph within the tomb compels Granu on a mission to Keltar in order to battle his brother for the hearts and minds of his people. Nostr opens a passageway beneath the tomb and instructs the men to use it as an escape from the mountain.

The Battle of the Bear’s Knuckles begins. The Zodrians use a series of feints and tricks to ensnare the Keltaran in multiple traps. A modest number of Keltaran lose their lives, including Captain Aul. However, the Keltaran numbers remain too large for the Zodrians to overcome. Manfir calls Fenrel into single combat in order to remove the force leading the giants down this terrible road of destruction. Granu suddenly appears and demands to take Manfir’s place in the battle.

The Keltaran brothers face one another and Fenrel shows the depths to which he has sunk. The evil brother calls on the power of Amird and Chaos but in the end it is his undoing. Each infusion of power he receives from Chaos doubles the intensity of the bloodstained fiery axe wielded by Granu. Fenrel dies rather than submit to Granu. The armies of Zodra and Keltar unite under one banner.

Kael and Ader meet with Temujen the chieftain of the Erutre. The woodsmen of Derol and the knights of Astel join them. Portlo, the steward of Astel, is introduced to Kael. The steward attempts to force leadership on the boy, but Kael refuses the role. Temujen suggests an attack on the Valley of Mnim in order to create a diversion that might allow Kael and Ader access to the Scythtar to rescue Lilywynn. Those in attendance agree and the battle begins.

The Battle of the Mnim Valley spills out of the mountain onto the plains and into the Derol Woods. The Malveel in charge of the Mnim forces, Greeb the One Eye, is a formidable foe. However, Greeb’s inability to temper his rage and hatred of the Astelans blinds him from the real purpose of the human plan. The Malveel realizes too late that he has been manipulated. He rushes back to the heights of the Scythtar, but Ader and the new Seraph slip past his mountain stronghold. Greeb rushes in pursuit but is blinded by Sprig and tricked into his own death by Vieri Shan.

Kael, Ader, Eidyn and Lilywynn flee through the Eastern Mnim pass into the ancient Kingdom of Astel, the heart of Izgra’s power.

“The Trees and the Night” concludes as General Olith Stormbreaker is released from the cellars of the mountain city of Keltar to discover his homeland under siege and the valley of Hrafnu awash in a sea of Ulrog.

BOOK IV OF THE SERAPHINIUM

THE MIRROR AND THE MAELSTROM

T
HE COUNSELOR THOUGHT it strange that he should be so chilled. After all, he sat upon a vast expanse of sand known for its burning hot winds.  However, nighttime lie upon the Great Borz Desert and its stifling heat already dissipated into the sky. The dunes sat cold and still. The Counselor stared into the blue flames of the camel dung fire and feigned interest in the debate surrounding him.

The more powerful chieftains of the Borz tribes reclined on ornate rugs. They haggled and argued over where their own warriors would be placed within the great battle plan the Counselor devised. He cared not where or how these men did their killing and dying. He only cared whether they followed orders. The tent silenced. Rada Shan sat up and stroked the stubble on his chin.

“It matters not where you serve,” stated Rada to those arguing. “Only that you serve.”

The Counselor was pleased. This fool assumed the leadership of his folk for a reason. Occasionally, he produced a salient point.

“Both tasks put before us by the Counselor are of great import,” continued Rada. “The raid on the white towers of Luxlor ought to be made with as small a number as possible.  We do not want to unnecessarily draw blades from our main force. Those in the main force will need all the numbers they can muster.  Pursuit of the Elven army is a dangerous task.”

“Agreed,” interrupted a dark skinned man across the circle from the Counselor. “That is why the Dubad Borzmust lead the attack on the Elven palace. My Windriders are the best combatants on the sands. Limited numbers will not be a detriment.”

Rada raised an eye at the boast then smiled.

“Yazir Dubad is correct. His tribesmen fight like demons when the battle reaches hand-to-hand combat, but the dangers of infiltrating Luxlor are equally great. The Elves are masters of the secret wood.”

Many in the circle agreed and nodded in approval.

“The job will require stealth and cunning ... ”

“ ... And the nerves that only the Shan assassins truly master,” concluded Rada.

The room silenced. Many averted their eyes to the floor or nervously sipped their wine. Rada’s eyes swept the room. He knew full well the thoughts behind those averted eyes.

Before the uniting of the tribes, many here lost a leader or loved one to his assassins. Generations from now the descendants of these men would see the logic behind Rada’s actions, but on this evening the wounds were still too new, still too deep. The Borz chieftain used these wounds to assert his dominance over the other men.

“I will lead the assault on the White Palace,“ stated Rada. “And Yazir will lead his Dubad and all other tribes against the Elven army.”

The former speaker beamed at Rada and nodded.

“You do me great honor, chieftain.”

The Counselor rose. It was time to feed the delusions of these simple nomads. He stood over them and spread his arms wide.

“Chieftains of the Borz, your courage and faith astound me,” began the Counselor. “These are the attributes my Elven brothers discard. You restore my faith.”

Smiles and nods of approval broke out amongst the leaders of the Borz.

“The final battle between good and evil creeps ever closer,” continued the Counselor. “And the words of the scribes show us the direction of your people. ‘The Army of Avra shall be spread like grains of sand after a great storm. Yet they will be called together before the white towers and do battle. Shame to those who ignore the call.’”

The Counselor swept his hand over the assembly. Faces beamed with pride.

“You are what the scribes foretold,” stated the Counselor sternly. “YOU are the Army of Avra, the key to the future of this world. You lay hidden, scattered in this vast ocean of sand. You are an unknown to the outside world. However, it is time you made your mark!”