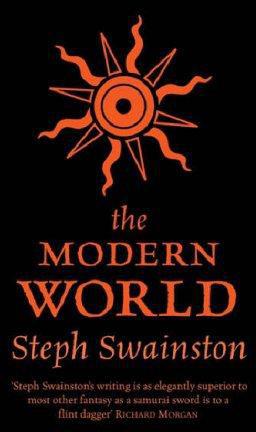 Also by Steph Swainston from Gollancz

The Year of Our War

Also by Steph Swainston from Gollancz 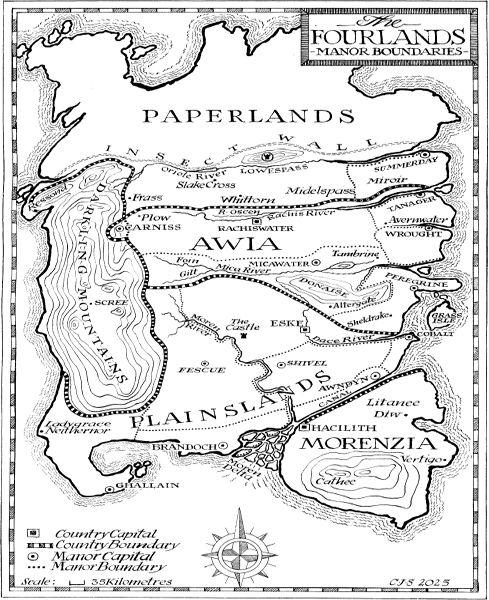 He let go by the things of yesterday

I wake, and lie motionless on my camp bed in the dark tent, listening. The wind roars down the gaps between my pavilion and the next, hisses over the guy ropes. Outside, heavy canvas cracks and flaps. The lantern outside my tent door vibrates on its iron stake and sets up a loud humming. When the gust dies back it unmasks the din that woke me. Soldiers are screaming. Men are shouting to each other in the absolute darkness outside. The gale gusts again so loud I can’t distinguish anything at all. I can have been asleep for only a couple of hours; it must be one or two in the morning.

I throw my blankets aside and leap off the bed. As my bare feet touch the damp grass the ground shakes so violently I fall to my knees. My bed and the low cane table next to it collapse, spilling my letters and clothes onto the sparse grass. Is it an earthquake?

The tremor surges strongly, a guy rope snaps and in the gloom I see the poles of my fyrd-issue pavilion start to lean to the right. The walls begin to droop, gathering creases.

There is a constant banging, the lantern flame wavers. Its light blows out: suddenly everything is totally black. Its pole hits the ground with a thump.

Wind puffs out the walls then sucks them hollow, drawing in the far-off sound of a desperate, unearthly shrieking, urgent hammering and splintering wood. That isn’t human. What’s going on? What’s happening? I fumble around trying to find my matches, before I realise what it is. Animals are making that noise. Horses. What the fuck would make them scream like that? They’re in their stalls at the top of camp; the smashing is their hooves beating the gates where they’re trapped. Their noise is solid panic but I can’t hear anything else. In a second the power of their agony winds me so tightly on edge that I whimper. I grab my combat trousers off the grass, hop about on a bare foot shoving one leg into them, then the other, pull them up to my waist, button them.

The gale swells and punches the tent walls. The horses’ screams die out, one by one. Now I can hear men and women yelling, their shouts come from both sides and from the row of pavilions in front of mine.

‘Help!’ A man’s cry fragments in the wind. Footsteps thump on the duckboard track outside, resounding in both directions. People are running to and from the centre of camp; I can’t tell what they’re trying to do. Lamps flare outside, far on the other side of the pavilion lines, towards the gate. Their light shines through my walls as yellow dots with fuzzy haloes, outlining the ridges of the surrounding tents.

I thrust my toes without socks into clammy leather boots, shoving them right down to the hard sole and drawing the bucket tops over
my knees. I pick up my scale-mail hauberk, hold it up, jangling, over my head and struggle into it as if it is a jumper, leaving the bottom straps loose. Its freezing scales slap against my bare skin but I have no time to put on the undershirt.

I fumble my left arm into my round shield’s leather loops. I can’t see anything but blackness at ground level. I feel for my ice axe, snatch it up and wriggle its webbing strap over my hand, around my wrist. The canvas ceiling sags down to my head. Its rear wall billows in on a cold blast, carrying the smell of tough grass and wet moss. The ropes stretch to breaking strain, then yank thick pegs out of the ground.

I dart to the entrance, unlacing the flaps from each other with my long, white fingers up in front of my face. A silhouette stumbles past outside, running for its life, then back again in the direction it came. He falters one way then the other, incapable of making a decision, swiping at the air with a broadsword clutched in one muddy hand.

I scrabble out under the cloudy starless sky, onto the planks that serve row fifty-one. I tread on something lumpy and yielding, and look down. It is a severed right hand. I lift my boot toe off its palm and its curled fingers relax slightly.

Abruptly a tremendous noise like a tree trunk breaking crashes through the gale, followed by a running series of snaps starting deep in the night in front of me. It sounds like sailcloth ripping, or a hunter stripping the ribs off a carcass. It approaches louder and closer, peels past me on my right, and ends far behind me with a ear-splitting crack. I crouch wondering what the fuck it was. The wind exalts with twice the strength and splatters water drops from the tent canvas across my face. The palisade must have gone down. Three sides of our square encampment are wide open. The wind roars straight from the high moor with no shelter to break it up and searches out the tiny gaps in my mail shirt. I have a sudden impression of the vast, empty hills. It is five kilometres to our reinforcements at Slake Cross, three to the nearest fortified farm.

This must really be an earthquake if it’s strong enough to rip down the palisade. The ground shakes in short spasms. Behind me my whole pavilion collapses with a sigh, blowing air past me. The wind tugs at it, twisting it into a rustling, living form. Torn strips flap past, writhing as they ascend. They fly like flags from the tent next to mine; it has been shredded. Tangled bloodstained clothes roll and wrap themselves around the base of its pole. To my right, towards the centre of camp, the neighbouring tents in the line lie collapsed in the same direction, like trees in a blasted forest. There are more lamps along the track but
the ones that aren’t dead gutter feebly. I stare into the roaring night but I can’t see any further.

A dark-haired man sprints along the duckboard, clutching his crumpled, padded undershirt to his naked chest, the greaves on his otherwise bare legs flashing.

He just disappears against the moors’ lightless bulk.

I sense rather than see movement on my right towards the fallen palisade. Maybe men, heading away from the tents. They seem to thin out, are gone. I hear clicking and swing round with a breath to my left. Did something scuttle behind the canvas wreckage? My hand is so tight around my axe haft I feel its tally notches pressing into my palm. I bring it up into guard.

A soldier is squatting to shit in front of the next tent. The tent’s walls are patched with blood and it emits a warm cloying smell of viscera. The soldier is looking away from me, so terrified that his bowels let go and he’s getting it over with as fast as possible.

Another man runs past, wearing nothing but a coat and pants, his ponytail whisking. I don’t know how to stop them fleeing so I yell the rallying cry, ‘To me! To me! Minsourai! … Wake up! … Wake …’ But there is no one to wake. I can’t see inside the laced tents and even if I could I don’t want to. I back away; I might be safer at a distance from them.

These are the advance guard, only five thousand men but still too many to rally. Where’s Hayl? These pavilions are for his minsourai, mounted scouts who reconnoitre and find routes for the fyrd, locate and mark positions to camp.

I begin to pick my way in the opposite direction towards the centre and the Castle’s field headquarters. If we can possibly regroup, the Sun Pavilion will be the best place.

I follow the duckboard raised above the grass that’s bruised and pasted down into the mud. The mud is becoming more slimy with blood. Under the boards I see a boot with a lower leg protruding. No sign of the rest of the body. Further on, dismembered limbs scatter the tussocks and track.

The wind batters against me and, somewhere within it, I catch the rasp of an Insect’s leg against its shell. I shrink back and stare around. I can’t see anything!

Behind me, something the size of a pony but with thin long legs skitters across the track. I glimpse a flash of red-brown shell. They’re everywhere! My scalp tingles: at any moment one will lunge out of the night and grab me before I even see it.

Far on the other side of camp, lights are clustering and moving away. I’ll try to reach them. If I can trust what I’ve heard, the palisade’s still upright over there.

The wind gusts from every direction carrying the brief sound of mandibles chopping closed, like a whetstone on a scythe blade. Closer to the centre now, the tents on either side are nothing but shreds. Inside one, I hear the sound of bone splintering. In each pavilion, ten men are dispatched by bites before they wake up, their bodies twisted into different postures. Ten men fused together into a slaughterhouse heap so unrecognisable I’ll have to use their dog tags to identify them.

The next tent stores the armour consignment that arrived yesterday. I hear crashes as clawed feet skid over the steel, knocking against piles of plate, jostling sheaves of pikes. I smell whiffs and hear scraping from the latrine shack. Insects are in there too, turning over the earth and eating the shit.

The path begins to zigzag. The earthquake has shaken some of its joined sections apart. Then I see it folded into peaks; the boards are still connected but standing on their ends.

Grey eye facets glitter. I glimpse an Insect face-on. It pulls back into the darkness between two pavilions. Its triangular antlike head moves up and down; it is tangled among crossed tent ropes, severing them with bites. Pieces of paper and torn pennons fly through the night, brushing the ground and catching against buckled ridge poles.

I see angular shapes of Insects standing, feeding on the corpses. A brush of air, something rears. Instantly I see jaws like stag beetle mandibles, then it crashes into the shield. Its jaws slide off the curved edge. I yell and swing my axe, feel it connect. I free the axe and bring it down again. It’s dead. It’s dead! Calm down! Short breaths rush in and out as I feel not think – how many more? I have to get away. I plunge down the track, running blindly. I’m on the verge of completely losing control, then I stop.

The track has ended. There are no more planks.

At the same moment a heavy gust blusters against my face carrying the unmistakable firm burnt copper scent of Insects. When as a child I lost my milk teeth, pulling at a tooth and turning it rushed a salty blood taste into my mouth, and I had a strange sore pleasure from turning a tooth on a flesh thread or biting down the sharp underside onto my gum. That’s what Insects smell like, and it’s so intense there must be hundreds. How have they appeared inside the camp? My jaw prickles as if I’m about to vomit. I gulp down saliva and I let out a scream to release the fear.