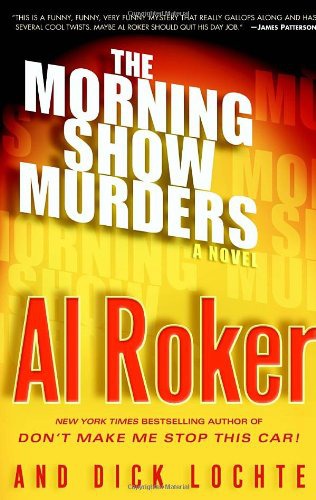 One of the few good things about modern times:
If you die horribly on television, you will not have died in vain. You will have entertained us.

The big guy lumbered toward me, waving the cleaver. Weeping like a baby.

"I hope not," I said, looking at the mangled, bloody mess he'd caused. "Why don't you give me that cleaver before you make this any worse?"

"I'm a screwup," the big guy said. He was close enough for me to read the little name tag on his white coat. Eldon Something with Too Many Consonants.

"We all have bad days, Eldon," I told him. "Just hand me the cleaver."

He hesitated, then handed over the knife. He made a loud sniff to clear his sinuses, then used the sleeve of his white jacket to wipe the moisture from his eyes and the sweat from the rest of his face.

I was sweating, too. It could have been the heat from the television lights. Or the steamers. Or Eldon's incompetence with the cleaver. Probably all three.

"Chef," I corrected him.

Actually, it's Chef Billy Blessing. If you recognize the name, and I sincerely hope you do, you'll understand that I don't engage in a whole lot of on-the-job chef-ing these days, though I do run a popular restaurant on the Lower East Side in Manhattan, Blessing's Bistro. (A
New York
magazine pick. Tops in food and service per
Zagat
, thank you very much.) I have a line of savory prepared meals (which you can find in the frozen-food sections of the better supermarkets). And there's a series of cookbooks (the latest of which,
Blessing's Best: Brunches
, just went into a second printing, a
New York Times
Bestseller).

But people usually know me because I'm on TV. My own show,
Blessing's in the Kitchen
, appears on the Wine & Dine Cable Network, Thursdays at four p.m. EST, and, for reasons I've never understood, repeated at two a.m. on Saturdays. I guess if you come home drunk, the first thing you want to do is turn on the forty-two-inch LCD and watch me cook. And, crucial to the whole Blessing mini-empire, I'm a regular on
Wake Up, America!
, the morning news show airing weekdays on the Worldwide Broadcasting Company. I'm the guy with the food features, interviews, and the joke of the day. Viewers tell me I remind them of a stocky Eddie Murphy, minus the mustache, the honking laugh, and the leather pants. I prefer to think of myself as a more accessible, less intense version of Denzel Washington.

They also assume, because our producer, Arnie Epps, has instructed me to keep a smile on my face whenever I'm on camera, that I'm always cheery. I'm not. At the particular moment I am describing, in the midst of a disastrous trial run for a new Wine & Dine series, I was one hundred and eighty degrees from cheery.

I turned to survey the other nine inhabitants of the soundstage kitchen. They, like Eldon, were dressed in chef coats, with most of their hair tucked under white caps. Also like Eldon, they were all very young, the exception being a beady-eyed fortysomething gent who had the appearance and the odor of a greasy-spoon fry cook.

They'd separated themselves by gender. A male with acne was staring at me with the goofy adoration of a dependent dog. Another was nervously rubbing a mustache that looked like anchovies attacking his upper lip. I spied a brown Mohawk partially tucked under a cap, the
oily bottom spikes sticking out over the collar of his coat like the tail of a dirty bird.
Yuchhh!

One of the very young women--girls, actually--chomped on gum. A pretty brown-skinned sister who might qualify as a supermodel trainee seemed more interested in protecting her long fingernails than in food preparation. A girl with a sallow complexion had little pieces of metal piercing her brows and ears, and every time she nodded her head, which was often, they caught the light and reflected it into the camera, causing a flare. God help her if she was ever trapped outdoors in a lightning storm.

Breakfast was obviously the most important meal of the day for a fourth girl, judging by the tattoo of a fried egg on her neck. A fifth, another black woman, was showing more attitude than Wanda Sykes but none of her humor.

All were supposed to have had at least an introduction to the preparation of food, but my guess was that they wouldn't have known how to toast up a Pop-Tart.

"Is there anybody here who can split a duck?" I asked.

The fry cook stepped forward.
"No problema
, boss," he said, taking the cleaver from my fingers.

He approached the countertop chopping block, where three medium-size ducks rested. Two of them were picture-perfect. The third had an ugly gouged and mangled breast, thanks to Eldon's halfhearted use of the cleaver. The ducks had been cleaned and were ready to be seasoned with salt and pepper, rubbed with olive oil, and then placed in a steamer with chopped scallions, shredded ginger, six tablespoons of dry sherry, and oil.

But first they had to be split.

"Easy as spankin' the baby," the man said. He drew back the cleaver and brought it down on one of the perfect birds. A clean severing.

The man shrugged and raised the cleaver again. He removed the neck and wings.

But instead of stepping away, he raised the cleaver again and cut off a leg. He'd lopped off the other leg before I could shout "Stop!"

His brow furrowed in confusion.

"The legs are supposed to stay on," I said.

"Where would that be?"

"Of course," I said. I turned to squint into the darkness beyond the lighted soundstage and called out, "Lily, if you're out there hiding, may we speak?"

The show's director and my coproducer, Lily Conover, moved past the camera crew and emerged into the light. Lily was a small, wiry woman in her forties, with highlighted blonde hair cut in a short fluff. She wore cat's-eye glasses, a plaid shirt, tight black jeans, and cowboy-style boots made from the hide of some no doubt nearly extinct reptile.

"Pretty ugly, huh?" she said as I rested my arm over her shoulders and led her to the rear of the studio.

"You think?
Food School 101
. A concept right up there with a singing cop show,
Who's Your Daddy?
, and
Britney and Kevin: Chaotic
."

"The idea isn't totally awful," Lily said. "But we needed more time. This bunch is the best we could find on such short notice."

"These kids would have trouble microwaving soup," I said.

"They'd probably leave it in the can," Lily said.

"And the so-called celebrity judges?"

We turned to the table where the three judges sat, looking hot and restless. The most famous, an aging former sex kitten whose only lingering fame was due to her vociferous disbelief in global warming, was trying unsuccessfully to keep the unpopular, and some might say repulsive, insult comedian from invading her personal space. The final judge, a three-hundred-plus-pound food writer, was staring wistfully at the raw ducks.

"Let's dump the concept and send this crew back to KFC and points south."

"Rudy," I said, sighing. "Why did we even consider his lame idea?"

"Why? Let me count the ways," Lily said. "One, Rudy Gallagher is a Di Voss Industries vice president, and executive producer of a morning news show we all know and love,
Wake Up, America!
You may remember the name from your W-2 forms.

"Two, while Rudy isn't directly in charge of our little cable network, his fiancee, Gretchen Di Voss, is. That would be the same Gretchen Di Voss who is the daughter of the owner of Di Voss Industries. I know you've heard of her, because you and she used to ... How do the kids put it? ... Knock boots."

"And three," Lily said, not to be denied, "your old flame has given the lovable Rudy's independent production company the green light on this pilot. So ..."

"We can sort of work around him, I think," she said.

"Let's try. And could we possibly set our celebrity standards a little higher than the D-list?"

"Sure," she said. "Of course, that would mean paying them a little more. And the money would have to come from our end. ..."

"That's one of the things I love about you, Lily. The subtle-but-powerful quality of your arguments. So we stick with these turkeys. But can't we at least find apprentices who don't look like fugitives from the Syfy Network?"

"Rudy wants the show to skew young," Lily said. "And he wants eccentric."

I rarely get headaches but felt one coming on. "These kids can't even turn on a stovetop. How can we expect them to cook a meal? And the bozo with the Mohawk, what's that all about?"

"Which explains the gal with the egg tattoo on her neck."

"As I understand it, that's just the start of her body menu."

Having no interest in the special of the day, I smiled but only fleetingly. "How serious is this youth-demographic thing? Are they gonna ask for changes on
Blessing's in the Kitchen?
"

"You know the game, Billy. But for now at least they're focusing on
Food School 101
. Yet another reason not to just blow it off."

"You're right," I agreed, glancing at my watch. Nearly six-thirty. "Let's call this a wrap and head back to the old drawing board. Priority one: better students."

"And forget the eccentric stuff. I can be eccentric enough for all of us."

"Let me worry about Rudy."

"Well, now's your chance," Lily said, using her chin to point across the soundstage. "But you may have to wait in line."

Rudy Gallagher, tall, trim, immaculately dressed, was deep in conversation with the black pre-supermodel, his TV camera-handsome face registering concern at whatever she was telling him.

"Of course it is. Another of Rudy's proteges?"

Rudy had the girl's right hand sandwiched between both of his and was saying something that brought a stunningly bright smile to her face.

"Do you remember Ms. Moon's age, by any chance?" I asked.

"Think I should go break it up?"

"She's past the age of consent."

"You should meet my gramps, Billy. You two think alike. Today's eighteen-year-old girl is the equivalent of a debauched forty-year-old when you were a kid."