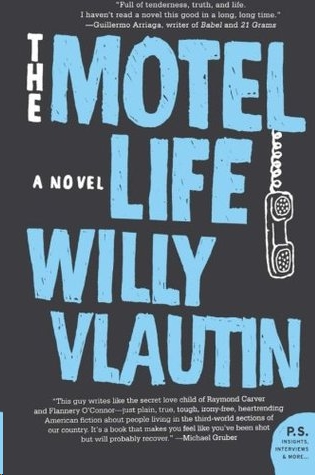 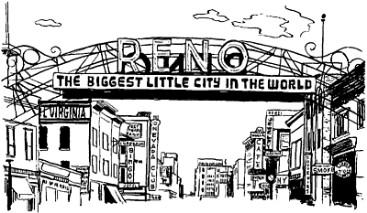 THE NIGHT IT HAPPENED
I was drunk, almost passed out, and I swear to God a bird came flying through my motel room window. It was maybe five degrees out and the bird, some sorta duck, was suddenly on my floor surrounded in glass. The window must have killed it. It would have scared me to death if I hadn’t been so drunk. All I could do was get up, turn on the light, and throw it back out the window. It fell three stories and landed on the sidewalk below. I turned my electric blanket up to ten, got back in bed, and fell asleep.

A few hours later I woke again to my brother standing over me, crying uncontrollably. He had a key to my room. I could barely see straight and I knew then I was going to be sick. It was snowing out and the wind would flurry snow through the broken window and into my room. The streets were empty, frozen with ice.

He stood at the foot of the bed dressed in underwear, a black
coat, and a pair of old work shoes. You could see the straps where the prosthetic foot connected to the remaining part of his calf. The thing is, my brother would never even wear shorts. He was too nervous about it, how it happened, the way he looked with a fake shin, with a fake calf and foot. He thought of himself as a real failure with only one leg. A cripple. His skin was blue. He had half- frozen spit on his chin and snot leaking from his nose.

‘I’m freezing my ass off. You break the window?’

‘Where’s the duck then?’

‘I threw it back out the window.’

‘Why would you do that?’

‘It gave me the creeps.’

‘Where are your clothes?’

I took the top blanket off my bed and gave it to him. He wrapped it around himself then plugged in the box heater and looked outside. He stuck his head out the broken window and looked down.

‘Someone probably stole it.’

‘Sure.’ I leaned over and grabbed a shirt on the floor and threw up into it.

‘You want a glass of water?’

‘No, I think I feel a little better now.’ I lay back in bed and closed my eyes. The cold air felt good. I was sweating, but my stomach began to settle.

‘Tonight she got mad at me,’ he said in a voice as shaky as I’ve ever heard. ‘I don’t remember what I said, but she yelled at me so hard that I got up to get dressed but she got up first and took my pants and wouldn’t give them back. She ran outside and set fire to them with lighter fluid. I had my wallet and keys in my coat, but the main thing, the real thing, is that I left. Got in my car and started driving home. I was a little drunk, but Jesus, I was okay to drive, and I was just going down Fifth Street, and some kid runs out in the middle of the road on his bike and I hit him. It’s fucking four in the morning, there’s snow on the ground, there’s snow coming down. What’s a kid doing riding his bike around at that time of night in that sorta weather? There were no other cars behind me, no one around at all to help. I wasn’t even going twenty. There was no stop sign. I didn’t run anything. It wasn’t
like that. He just came out of nowhere. I stopped as fast as I could. I got out to take a look, and the kid’s there on the snow and asphalt with his head busted open and blood coming out of his mouth. Jesus, I didn’t know what to do. I went back into the car where I got a blanket in the back seat, and I covered him with it. Used part of it to put over his head where the bleeding was. I think he was dead right then. I checked his breathing and pulse, but there was nothing. No one was around. Just the little light coming down off the street lights. By that thrift store, by that old RESCO warehouse. I didn’t know what to do. I couldn’t leave the kid there so I put him in the back seat,’ cause I was gonna bring him to the hospital. Then when I picked him up I knew for sure he was dead. Part of the inside of his head had come out. I’d never seen anything like it. It was the most horrible thing I ever saw.

‘I began thinking of how I was drunk and how I’d go to jail. Jesus Christ. I put him in the back seat anyway, and I get in, and suddenly I see this taxi cab turn on his lights. He’d been in a vacant lot about a block away. Maybe he was sleeping, who knows. Maybe he saw the whole thing, but if he did he would have stopped, wouldn’t he? He would have helped me? But he just drove off in the opposite direction. So I start driving to Saint Mary’s, maybe ten minutes ago, but the kid’s dead. Ain’t much use in taking him in, is there? If I’d run a light or something, sure, but I didn’t. He hit me more than I hit him. I don’t know what the fuck to do. I had the right of way, I did, I swear I did.’

‘What the hell are you talking about?’ I said and sat up.

‘I’m the worst person in the goddamn world.’

I got out of bed and put on my pants and shoes.

I looked out the window. His car was down there like he said.
The sky was half dark; there was new snow on the ground and some still falling. There were hardly any people on the street below. It was a hard thing to imagine a kid in the car like that.

Jerry Lee stood in front of the heater, the orange glow reflected on his body. He was shaking.

‘Why don’t you get in bed? I got the electric blanket going.’

‘Let me just stand here for a second then I will.’

I looked outside again. I saw a truck delivering newspapers to the casinos, I saw two taxis drive by.

Jerry Lee moved to my bed. His boots hung off the side.

I found my bathroom towel and covered the puke. Then I threw it all in a trash basket and stuck the basket in the hall. I got a glass of water from the sink, put on my parka, and sat in the recliner.

‘Frank,’ he said and began weeping, ‘I don’t understand how it could happen. You should have seen his face. He still looked alive when I went to him but, Jesus, he wasn’t. He’s so young. He probably ain’t even in high school yet. I just don’t understand why this is happening.’

He took the keys out of his coat pocket, and threw them at me. I set the keys on the floor.

‘Doesn’t matter. What you said, it really happened? You swear on your life?’

‘It happened,’ he said and turned away and began crying harder.

I stood up and got my shampoo and soap. ‘I’m going to take a shower. I can barely stand my stomach hurts so bad. When I get back maybe I’ll feel better and then we’ll figure something out.’ 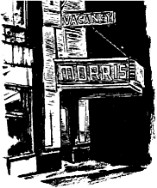 I WALKED DOWN THE HALL
and locked myself in the shower room. I sat there for a long time letting the hot water fall over me. I lay down and curled in a ball on the cool tile floor hoping it would ease the pain in my stomach and after a long while it did.

I walked back to my room wet and dried myself with a pair of jeans. I put on long underwear, pants, a long-sleeved flannel shirt, shoes, and my parka. I stood in front of the heater.

‘Is that kid really in your car?’ I asked.

Jerry Lee had the covers up to his neck.

‘Yeah,’ he said and tears began again. I hadn’t seen him cry in years, maybe since we were kids. ‘I don’t know why it happened, but it did.’

‘Why didn’t you call the police or an ambulance?’

‘Like I said, there was no one around, no phone booth, no store, nothing. I didn’t know what to do so I just put him in the car and
started driving towards the hospital. But then I knew he was already dead.’

‘But you didn’t do anything wrong, really, that’s the main thing.’

I went to my closet and gave Jerry Lee a pair of pants to wear. He dressed and we went down to the street below. I opened the car door, and in the dimness of the inside light I could see the kid. His face covered in a blanket. Worn-out jeans and faded black tennis shoes. Pale white arms bent in wrong directions. It was a horrible thing to see. I shut the door and we walked around for a while and tried to figure out what to do.

It was almost dawn when we drove a block from Saint Mary’s Hospital and left the poor kid on the frozen grass in front of an office building. Jerry Lee carried him from the car telling him how sorry he was. Then we drove to the Cal Neva, parked in their lot, and started drinking. By nine, I was drunk again, and by ten we left the casino and walked to the bank.

A French Kiss in London by De Ross, Melinda
The Return of the Titans by James Thompson
Oath Breaker (Sons of Odin Book 3) by Erin S. Riley
The Cain File by Max Tomlinson
Rock Harbor by Carl Phillips
The Visitor: Alien Hunger Special Edition by Kaitlyn O'Connor
Miss Me Not by Tiffany King
One Bad Apple by Sheila Connolly
Bound to You: Volume 2 by Vanessa Booke
The Beginner's Guide to Living by Lia Hills
Our partner