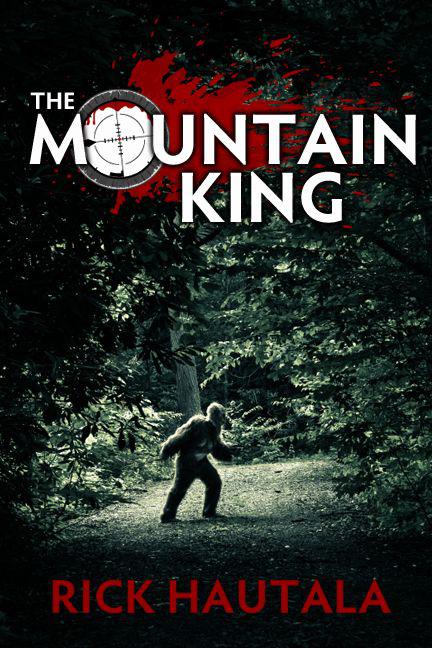 The characters and events in this book are fictitious.Any similarity to real persons, living or dead, is coincidental and not intended by the author.

“Wolves will dig up the graves of your ancestors, and panthers will gnaw on the bones of your children
. . .”

“I think we’re screwed!” Phil Sawyer said. His mouth was a thin, tight line above his coat collar as he looked over his shoulder at his friend, Mark Newman.

“Not quite yet,” Mark replied.

They were high above the timberline on Mount Agiochook in Maine, near the New Hampshire border. It was a beautiful, brisk mid-September afternoon, but a swift storm cloud was sweeping out of the west like a raven’s wing—silent and black. With rising apprehension, the two men watched as shadows rippled like a gush of dark water across the contours of the distant hills. Behind the swift-moving front was a slanting gray haze of precipitation.

“If that’s just rain, we’re only going to get a little wet,” Mark said.

“What do you mean
if?”
Phil asked. There was a tremor in his voice as he wiped sweat from his forehead with the back of his hand. “I’m sweating my
ass
off. It can’t be cold enough up here to snow, can it?”

Mark shook his head and squinted as he watched the fast-approaching shadow spread over the valley below. Within a matter of minutes, the blue sky had turned soot gray.

“Wouldn’t be all that unusual. ‘Specially this time of year,” he said, sniffing the rapidly chilling air. “ ‘N it sure as hell looks like a snow squall to me.”

Phil’s eyes widened as they shifted back and forth between his friend and the onrushing storm.

“What the hell can we do? Where can we go?” He was fighting hard to keep his voice steady. “Shit! If we were down the trail a bit, under the trees—”

“Yeah, we might just get wet,” Mark finished for him. “This high up, though, it more than likely’s gonna be snow.”

“Enough to screw us?” Phil asked, glancing around the bare, rock-strewn slope. The summit, perhaps a mile away, looked like a dark, carved stone pyramid against the fast-moving clouds. The wind gusted with a sharp, knife-edge chill.

Phil was an inexperienced hiker, and it was obvious to Mark that he had no idea what to do in an emergency. As far as Phil was concerned, this was supposed to be nothing more than a pleasant, late summer three-day hike through Grafton Notch, heading northwest from Hilton, Maine, to Gorham, New Hampshire, along twenty-four miles of the Appalachian Trail. It had never crossed his mind that it might snow this early—not in September.

“I think we’re just gonna have to hunker down and wait it out,” Mark said. He pointed to the right, where

the slope seemed to drop off. “There’s a ravine over there that’ll give us some shelter.”

Shrugging his shoulders to settle his backpack, he started across the steep rock face with Phil close at his heels. The air went suddenly still, hushed with expectancy as the sunlight darkened. Every tone of color, every detail on the mountainside shifted as though seen through dark sunglasses. When the two men were less than halfway to where Mark was taking them, a low, mournful sound almost like a bestial cry filled the air.

“What the hell?” Phil shouted, stopping in his tracks and looking behind them.

“No fuckin’ way,” Phil said, narrowing his eyes and staring back at the way they had come. He clenched his gloved hands into fists and crouched as though preparing for an attack.

“You’ve heard too many of those stories about this place being haunted,” Mark said with a laugh as he indicated the summit with a waving gesture. “Come on. If we don’t find some shelter soon, we’re gonna get slammed!”

The stormy darkness closed around them like an enfolding blanket, but there was no silence beneath that blanket. Shrill whistling noises rose higher as the wind sliced over the rocks. Then came a loud roaring sound as the clouds unloaded and snow and ice began to pelt the mountaintop.

“Hurry up!” Mark said, having to shout to be heard above the shrieking wind.

Strong, fitful gusts slammed the two men from all directions. Pellets of ice rattled around them like a hail of bullets. Within seconds, their view of the summit was lost as the mountainside became glazed with a coating of ice that made even the most carefully placed step treacherous.

Snuggled down inside the collar of his jacket, Mark barely heard what his companion had said.

“We just gotta make it to the ravine,” Mark replied, waving his arm encouragingly.

Both men crouched low to prevent the strong blasts of wind from knocking them off their feet and sweeping them away. Skittering like overgrown rock crabs, they forged ahead in the direction Mark had indicated. The wind-driven snow thickened until neither one of them could see more than a few feet in any direction.

“Stay close!” Mark shouted. “I don’t want to lose you!

Glancing over his shoulder, Mark saw Phil struggling along behind him, no more than a slouch-shouldered, gray blur inside the snowy maelstrom. He cursed himself for not thinking and acting more decisively. They hadn’t planned on any rock climbing, so they had brought along no climbing ropes. At the first sign of bad weather, he knew he should have taken the time to tie themselves together using a tent rope or something.

But it was too late now.

Any delay before they found shelter from the cutting wind and snow might prove dangerous, possibly fatal. Waving his arm encouragingly, Mark forged ahead, keeping a watchful eye out for any hazards that might suddenly appear out of the storm.

“It can’t be much further now!” he shouted. His face and hands were numb from the cold. His feet kept slipping out from under him as the ice coating on the rocks grew thicker and slicker. Up ahead, through the twisting sheets of snow, he finally saw a dark gash in the landscape.

It had to be the ravine he was looking for.

Trusting that Phil was right behind him and could see where he went, he scrambled on all fours over to the edge of the opening. Satisfied that this would at least keep them out of the direct arctic onslaught of wind and snow, he slid down into the little bit of shelter the steep drop-off afforded. He could barely hear the scrambling sounds Phil made as he followed him down into the narrow gorge.

“Hey, some fun, huh?” Mark said, smiling as he turned to look at his friend.

What he saw was a mask of misery, despair, and worry. Phil’s face was raw and red; his eyes were watering from the stinging cold and wind. Phil tried to say something, but his teeth were chattering so badly, whatever he was trying to say was lost.

“What do you say we open up the tent and cover ourselves?” Mark said.

Even though he was wearing gloves, his hands were nearly frozen. His fingers fumbled to untie the carrying case. Thankfully, the wind didn’t reach its icy fingers down into the ravine where they crouched; so although it seemed like long minutes, it was really only a matter of seconds before they flapped open the tangle of blue nylon and pulled it over them like a huge, puffy comforter. In an instant, near total darkness embraced them, and the shrill whistle of the wind lessened.

Both men were panting heavily as they supported the tent with their hands to give themselves a bit of breathing space. “You hanging in there?”

For a moment, there was no response from Phil; then he sighed deeply and said, “Yeah—I guess so.”

Buffeted by occasional gusts of wind, the chilled tent material shifted and crinkled. It sounded like a blazing fire all around them, but it offered only a fraction of the heat a fire would. A cold, dark, stony silence enveloped the two men as tightly as the storm that embraced the mountain’s summit.

Mark shook his head. “No idea. Can’t imagine it’ll last very long. These things tend to blow themselves out pretty fast. The weather forecast said it was going to be nice all weekend.”

“We’ll just have to wait and see,” Mark said.

He was shivering too, but he didn’t want to let it show because of how obviously unnerved Phil was. Besides, he could already feel a change in temperature beneath the tent from their trapped body heat. He was confident they would weather this just fine.

For several minutes, both men were silent as they listened to the wind shrieking all around them. Neither could deny that—at times—it sounded more like a wild animal, bellowing its rage at the storm-tossed sky. The tent flapped like a gigantic flag in a hurricane wind as ice and snow pelted against it like a shower of stones.

“Well, aren’t you
glad
we decided to go for a hike this weekend?” Mark asked.

A deep, hissing sigh was Phil’s first response; then he whispered, “Shit, man, this is making me wish I had never even moved to Maine.”

A sudden gust of wind jostled the tent, almost pulling it away. The men clutched the tent’s edges and held them down until the breeze lessened. Then they settled back against the hard rocks, grateful, at least, that they were out of the direct wind.

“Yeah, that’s right,” Mark said. “You’re not even from around here, so you probably haven’t heard the stories about this place.”

“Stories? What kind of stories?”

“About the mountain being haunted.”

He started to laugh louder, but then he fell silent when, from far off, they once again heard a low, moaning howl. It rose gradually, warbling higher and higher until it suddenly cut off as though swept away by the wind. Although neither man said it out loud, they both thought it sounded much more like a howling animal than the wind. Mark could feel the spike of Phil’s fear like a tangible entity inside the tent.

“That sound—” Phil said, “tha—that’s just the wind, right? Just blowing over the rocks, echoing like in a cave or something ...”

“Of course it is,” Mark replied.

In truth, the sound had tingled a nerve inside him, too. He had lived in this area his whole life and had been to the top of Mount Agiochook an uncountable number of times. In all those times, he could remember hearing a sound like that only once before, and that had been on a humid August night with no wind whatsoever. He couldn’t stop himself from adding, “Unless, of course, it’s the ghost that supposedly haunts the top of the mountain.”

Beat to Their Heart by Whiskey Starr
Dates And Other Nuts by Lori Copeland
Elliott, Kate - Crown of Stars 1 by beni
Take the Reins by Jessica Burkhart
Kiss This by Quinn, Hadley
Folie à Deux by Cunneely, Jim
Her Fifth Husband? by Dixie Browning
Barcode: Legend of Apollo by Ross, Kashif
Charon's Landing by Jack Du Brul
The HOPE of SPRING by WANDA E. BRUNSTETTER
Our partner