The Murders at Astaire Castle (A Mac Faraday Mystery) 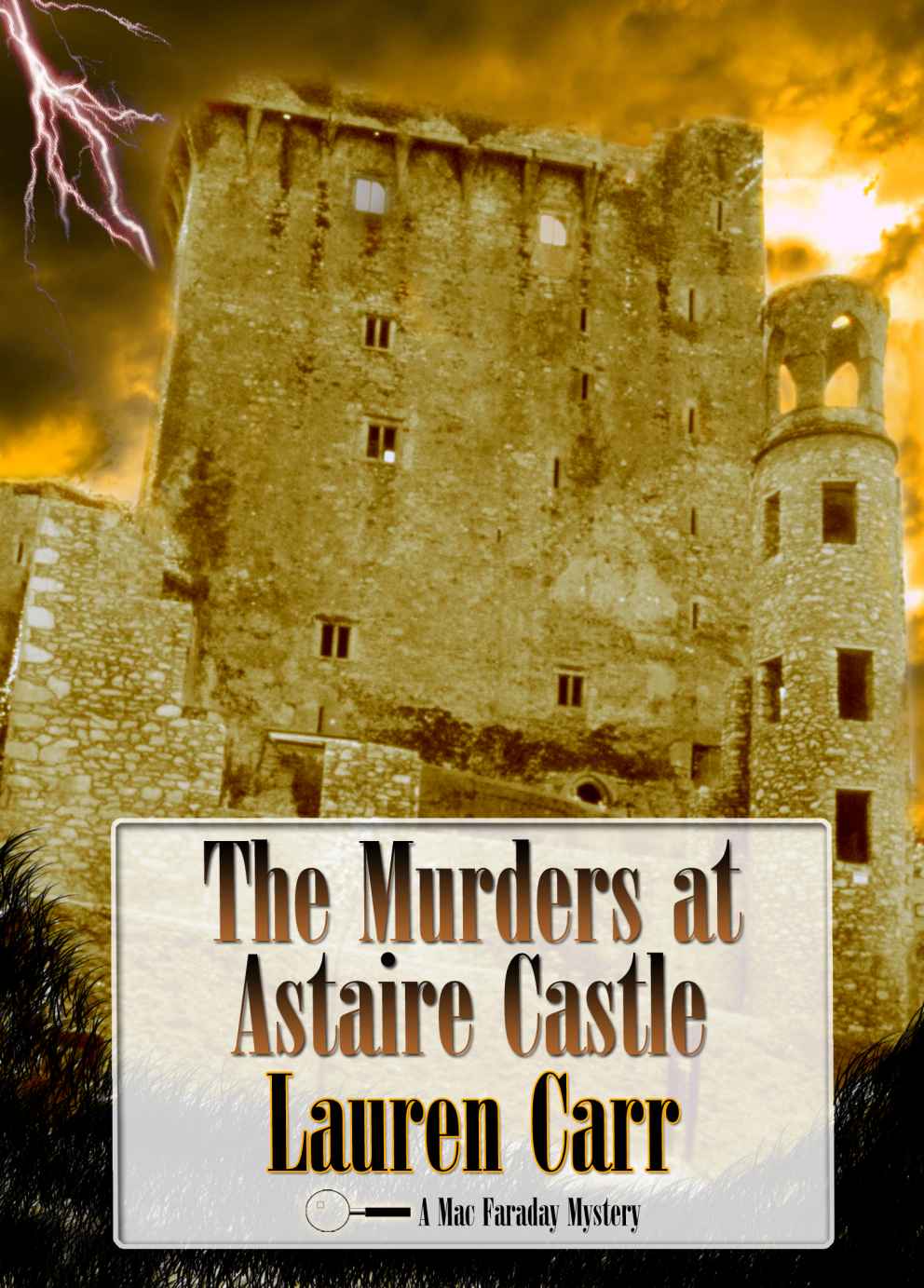 The Murders at Astaire Castle

All Rights Reserved © 2013 by Lauren Carr

No part of this book may be reproduced or transmitted in any form or by any means, graphic, electronic, or mechanical, including photocopying, recording, taping, or by any information storage retrieval system without the written permission of the author.

To Story-tellers and Writers of Ghosts and Goblins, and Things That Go Bump in the Night. This one’s for you. Enjoy!

Fans of the Mac Faraday Mysteries may notice a slight difference in
The Murders at Astaire Castle
. While this mystery does contain some supernatural elements, I would not classify it as a paranormal.

Halloween has always been a fun time. It is the time to break out and be someone else. As a child, I would pretend to be one of the Bobbsey Twins searching for clues to lead me to a secret treasure. If I was lucky, it was made up of chocolate. As a teenager, I was Nancy Drew. Always, when October rolled around, I craved mysteries with something extra added—something beyond the normal—something
supernatural
.

As an author, I couldn’t resist taking this one Mac Faraday Mystery on a scary Halloween adventure. I hope you enjoy this ride as much as I enjoyed writing it.

For you, my dear readers,
The Murders at Astaire Castle
is my Halloween trick or treat goodie to you! Enjoy!

Author of the Mac Faraday Mysteries

(in order of appearance)

Rafaela Diaz: Housekeeper at Astaire Castle. She thought it was a dream job cleaning an actual castle for a world famous horror author. She was wrong.

Damian Wagner: World-Famous Horror Author. After years of writer’s block, he hides out at Astaire Castle to pen the final chapter in his horror series. Mysteriously, both Damian Wagner and his final book disappear.

Mac Faraday: Retired homicide detective. His wife had left him and took everything. On the day his divorce became final, he inherited $270 million and an estate on Deep Creek Lake from his birth mother, Robin Spencer.

Gnarly: Mac Faraday’s German shepherd. Another part of his inheritance from Robin Spencer. Gnarly used to belong to the United States Army, who refuses to talk about him.

Robin Spencer: Mac Faraday’s late birth mother and world famous mystery author. She gave birth to Mac as an unwed teenager and gave him up for adoption. After becoming America’s queen of mystery, she found him and made him her heir. Her ancestors founded Spencer, Maryland, located on the shore of Deep Creek Lake, a resort area on Western Maryland.

Jeff Ingles: Manager of the Spencer Inn, the five-star resort owned by Mac Faraday. His therapist is on speed dial.

Riley Adams: Friend of David O’Callaghan. Disappeared during a Halloween party at the castle.

Reginald & Gwen Astaire: Built Astaire Castle on the south side of Spencer Mountain in the 1920s.

Nigel: Nathan Hindman’s white German Shepherd, who he had rescued in Germany during the war. Is Nigel still protecting Astaire Castle and Spencer Mountain?

Ed Willingham: Mac Faraday’s lawyer. Senior partner at Willingham and Associates. He chased Mac Faraday for three city blocks to tell him that he had inherited a fortune beyond his dreams. First lawyer Mac ever met who he actually liked—maybe because he works for him.

Stan Gould: Billionaire. Wants to purchase Astaire Castle as a wedding gift for his new wife Lacey. He won’t take no for an answer.

Where there is mystery, it is generally suspected there must also be evil.

Shivering, Rafaela turned up the fan for the heater in her old Plymouth. The weather channel was calling for snow. With an eye on the storm clouds heading straight for Spencer Mountain, she picked up the speed a notch. Her car bumped along the worn road forged through the trees and rock to take her to Astaire Castle.

The notion of being trapped at the castle by a winter storm made her curse the day she had accepted the job as housekeeper at the Astaire estate. The young immigrant thought her prayers had been answered by landing the job at the luxurious home. Not only was it prestigious to work in a castle, but lucrative since Damian Wagner was paying almost twice her normal hourly wage.

What a gem to put on my housekeeping resume—to clean an honest-to-goodness castle for one of the world’s most famous authors of horror books! So what if the Astaire Castle has a reputation of being haunted? I’ll be making a bundle for cleaning five days a week in the daylight. Besides, I don’t believe in no ghosts.

Rafaela regretted her decision the first time she walked into Astaire Castle.

At first, she dismissed her cleaning supplies moving from where she had left them as forgetfulness. Then there was the time she kept hearing someone whispering her name. She had looked around, but had never seen anyone. Similarly–with doors closing or opening, or footsteps coming up behind her, and the old-time music and party noises in empty rooms when no one was there—she tried to tell herself that it was all her imagination.

None of that was anything compared to the Wolf Man she had seen in the dining room mirror while she was cleaning it.

She had heard all about the Wolf Man who lived in the woods surrounding Astaire Castle. The woman with two teenagers who lived in the apartment next to hers was quick to tell her about him. Rafaela had dismissed it all as ghost stories made up by her neighbor’s kids to scare her—until she had seen him with her own two eyes.

That day she ran out of the castle. She returned only after Genevieve, Damian Wagner’s daughter, had promised that her father would finish his book and be moving out of the castle by the end of the year—at which time he would pay her a handsome bonus that would give her enough money to visit her family in Brazil for Christmas.

Rafaela caught her breath when her Plymouth entered through the gate at the end of the road to pull into the front courtyard and fountain.

The fountain was off. Damian Wagner had never bothered to turn it on. He wouldn’t notice if it was. He spent his time banging away on his computer in the study on the top floor. He wouldn’t eat if it weren’t for his daughter bringing food to him.

Then there was the editor—Mr. Jansen.

He reminded Rafaela of a bird with his bony frame, high cheekbones over a pointy chin, and thick eyeglasses with his blinking eyes magnified behind them. He even sounded like a squawking bird with his high-pitched voice, no matter what his mood or what he was saying. Ready to pounce in anticipation of any need from Damian Wagner, he was always lurking nearby.

Damian’s daughter, Genevieve, was as charming as she was beautiful. She often asked Rafaela about her family in Brazil and about her life in Deep Creek Lake. For the new immigrant to America, Rafaela felt as if she was making a friend who would give her good references for more housekeeping jobs in the resort town of Spencer—more millionaire estates to clean—estates that weren’t haunted.

Rafaela pulled her car around the circular drive and parked at the bottom of the steep steps that led to the front door. When she got out of her car, the wind howled and whipped her long dark hair around her head. The wind actually seemed to want to rip her thin coat off her body. Grabbing her box of cleaning supplies, she squared her shoulders, and sucked up her nerve to go inside.

Need to make this quick. They don’t have enough money to make me stay here during this storm.

The wind yanked the heavy wooden door from her grasp to slam it against the side of the house.

“Stupid door!” Rafaela set the box inside the foyer and went outside to grab the door and pull it shut. “Mr. Wagner! Mr. Jansen! Genevieve! It’s me, Rafaela! Hope I’m not disturbing you.” She picked up the box and made her way through the foyer.

She stopped. With wide eyes, she peered up the staircase to the second floor balcony. “Is that you, Mr. Wagner?” She paused to listen. “Genevieve?”

She waited for an answer. She heard footsteps on the floor up above.

The smell of burnt meat came to her nose. It smelled like steak that had been left on the grill for too long.

They must have grilled steaks last night.

“Lots of little children stopped by my apartment.” Feeling braver as she rattled on, Rafaela set the box of cleaning supplies on the kitchen table and gathered together her duster and furniture polish.

Best to start in the living room. The antiques, wood, and silver take the longest.

Admiring the decades-old priceless china encased in the china closet, she went through the dining room. With her cleaning lady’s eye, she gauged what needed to be addressed on this visit that she might have missed before. She stopped when the blotch of red on the kitchen door frame caught her eye.

It wasn’t until she saw a spot on the floor that she first considered that it wasn’t a condiment, but something much more sinister. She spotted another. Bigger this time … and another.

There was a red pool in front of the kitchen door that opened out onto the back patio and deck that projected out over the rocks to provide a massive view of the valley down below. The drops, splatters, and pools led to one common source—the fire pit outside.

She saw the flames and smoke wafting in the wind whipping around her where she stood in the open doorway. She stared at the blackened objects in the pit. What at first appeared to be a burnt log projecting out of the flames took shape.

The hand and fingers reached out to her.

The index finger was pointing at her.

Through the rapid beating of her heart, Rafaela could hear the footsteps behind her coming closer.

His image was reflected in the glass pane of the door. The wild hair. The crazed eyes.

The Perils of Praline by Marshall Thornton
Deadly Diversion: A Medical Thriller by Eleanor Sullivan
A Cold and Broken Hallelujah by Tyler Dilts
Sex and the Founding Fathers: The American Quest for a Relatable Past (Sexuality Studies) by Thomas A. Foster
Comedy Girl by Ellen Schreiber
In Partial Disgrace by Charles Newman, Joshua Cohen
The Last Shootist by Miles Swarthout
Return of the Cartier Cartel by Nisa Santiago
Some Day I'll Find You by Richard Madeley
Judith Alguire - Rudley 04 - Peril at the Pleasant by Judith Alguire
Our partner