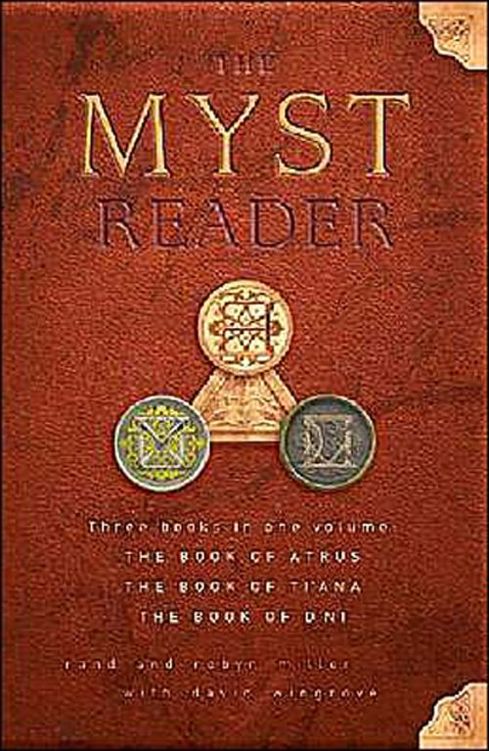 MYST: THE BOOK OF ATRUS

MYST: THE BOOK OF TI’ANA

MYST: THE BOOK OF D’NI

MYST: THE BOOK OF ATRUS

TO MOM AND DAD

T
HOUGH ONLY
OUR
NAMES ARE ON THE
cover, it would be untrue to say that we wrote this story by ourselves; there were too many other people involved.

Principally, we’d like to thank Richard Vander Wende. His contributions to story development and the creative process were at least equal to our own.

Thanks to Ryan Miller for writing the first book—his contributions set a tone from which we could work.

And finally, thanks to Brian DeFiore, our editor, and David Wingrove for accomplishing the impossible.

A special thanks to the fans of
Myst
, who’ve waited a long time for this history and helped it to happen. We hope it answers many questions, and raises a few more.

G
EHN’S BOOTPRINTS LAY HEAVY AROUND
the tiny pool, the lush, well-tended green churned to mud. At one end of the garden, beneath a narrow out-crop, he had dug a shallow grave. Now, as the dawn’s light slowly crept over the sands to touch the cleftwall twenty feet above, he covered over the young girl’s body, his pale cream desert clothes smeared with her blood and with the dark earth of the cleft.

From the steps above Anna watched, exhausted after the long night. She had done what she could, but the girl had clearly been ill for some months and the exertions of childbirth had eaten up what little strength remained to her. She had died with a sigh of relief.

Even now, in the silence of the dawn, she could hear Gehn’s howls of anguish, his hurt and angry ranting; could hear the words of blame which, at the time, had washed over her. It was her fault. Everything was her fault.

So it was. So it had always been.

He turned, finished, and looked up at her, no love in that cold, penetrating gaze. Nineteen he was. Just nineteen.

“Will you stay?” she asked wearily.

His answer was a terse shake of the head. Almost belligerently, he stomped across the surface of the garden, churning up yet more of her precious growing space, oblivious, it seemed, to the significance of what he did. She watched him crouch beside the pool, unable in her heart to be angry with him—for all he’d done and said. No, for she knew what he must be feeling. She knew herself how that felt—to lose the focus of one’s life, the
meaning
…

She looked down at her unwashed hands and slowly shook her head. Why come when there was nothing she could do to help?

But she knew the answer. He had come only because there was no one else to turn to. He had not wanted to come, but desperation had shaped his course. Knowing his wife was ill, he had remembered his mother’s healing powers. But he had come too late.

Too late for her, anyway.

Anna raised her head, hearing the baby’s cries. Stretching, she stood, then went down the narrow steps, ducking beneath the stone lintel into the interior. The baby was in the small inner chamber. She crossed the room and ducked inside as its cries grew louder.

She stood over it a moment, staring down at its pale blue eyes, then picked it up, cradling it against her.

“You poor thing,” she whispered, kissing its neck, feeling it relax against her. “You poor, poor thing.”

She went out and stood against the rail, watching as Gehn crouched by the pool, washing. She saw how the pool was muddied, its precious liquid sullied. Again there was a carelessness about his actions that angered her. He was thoughtless. Gehn had always been thoughtless. But she held her tongue, knowing that it was not the moment to mention such things.

“You want me to dress the child for the journey?”

Gehn did not answer, and for a moment she thought that maybe he had not heard, but when she went to speak again, he turned and glared at her.

“Keep it. Bury it with its mother, if you must. But don’t bother me with it. You saved it, you look after it.”

She bristled, then held the child out, over the gap.

“This is your son, Gehn. Your
son!
You gave him life. You are responsible for him. That is the way of things in this world.”

She drew the child back. As she did, it began to cry again. Below her, Gehn stamped across the churned ground and quickly climbed the steps, pushing past her roughly to go inside. A moment later he was back, his glasses perched on his head. Anna stared at him, noting that he had discarded his cloak.

“Your cloak, Gehn … You’ll need your cloak out there.”

He turned from her, looking out toward the lip of the volcano, just visible from where they stood. “Keep it,” he said, his eyes moving fleetingly across her face. “I’ll not need it anymore!”

His words frightened her, made her fear for his sanity after all that had happened. She stared at the child in her arms, not knowing at that moment what was best. Even so, she was determined he would hold the child once before he went.

She made to give the child to Gehn, but he brushed past her and stepped out onto the rope bridge. In a moment he was gone.

“But you didn’t name him,” she said quietly, holding the baby tight against her. “You didn’t even name him….”

WITHIN THE GREAT VOLCANO’S SHADOW, THE
desert floor was fractured. There, in a crack some eighty feet by fifteen, the darkness was intense. The casual eye might, indeed, have passed on, thinking it no more than a natural feature, but for the strange lip—a wall of stone some five or six feet high—that surrounded it.

For a moment all was still, and then a tall, cloakless figure climbed up onto the lip of the cleftwall, stepping out into the dawn light.

All was silence; a silence as only such desert places possess. In the cool of the desert dawn, a mist rose from the warm heart of the volcano, wreathing it in a faint, mysterious veil. Anna watched as the tall cloakless figure climbed the volcano’s slope, the mist swirling about him, concealing then revealing him again. The heavy lenses he wore gave his head a strange, yet distinctive shape. For a moment he stood there, his head turned, looking back at the dark gash of the cleft a mile below him, his tall, imperious shape backlit by the sun that bled through the shifting layers of haze. Then, with a dreamlike slowness, like a specter stepping out into nothingness, he turned and vanished.

T
HE SANDSTORM HAD SCOURED THE NARROW
rock ledge clean. Now, all along the sculpted, lacelike ridge, shadows made a thousand frozen forms. The rock face was decorated with eyes and mouths, with outstretched arms and tilted heads, as if a myriad of strange and beautiful creatures had strayed from the dark safety of the caldera’s gaping maw, only to be crystallized by the sun’s penetrating rays.

Above them, in the shadow of the volcano’s rim, lay the boy, staring out across the great ocean of sand that stretched toward the mountainous plateaus that were hazed in the distance. The only thing larger than that vast landscape was the clear blue sky above it.

The boy was concealed from watchful eyes, his very existence hidden from the traders who, at that moment, had stopped their caravan a mile out on the sands to greet the old madwoman. The patched and dirty clothes he wore were the color of the desert, making him seem but a fragment of that arid landscape.

The boy lay perfectly still, watching, the heavy lenses he wore adjusted for long-sight, his sensitive eyes taking in every tiny detail of the caravan.

The storm had delayed the caravan two days, and while two days was as nothing in this timeless place, for the boy it had seemed a small eternity. For weeks before the caravan was due he would dream of them night and day, conjuring them up in his mind; imagining himself cloaked and hooded, up on the back of one of the great beasts, leaving with them. Off into the greater world.

Of those dreams he told his grandmother nothing. No. For he knew how she fretted; worrying that one of the more unscrupulous traders might come in the night and take him, to sell him into slavery in the markets of the south. And so he hid when she said hide, and held his tongue about the dreams, lest he add to her worries.

Right now the boy’s eyes were focused on the face of one of the eight men: one he often studied—a dark man with a narrow head, his features sharp and curved within the hood of his jet black cloak, his beard trimmed close to his cheeks.

Studying the halted caravan, the boy noted the changes since they had last passed by. They had nineteen camels now—two more than last time. This and other, smaller signs—new necklaces on several of the camels, small items of jewelry on the wrists and about the necks of the men, the heavier lading of the camels—revealed that trade was good right now. Not only that, but the ease of the men spoke volumes. As they haggled with his grandmother, the boy noted how they laughed, revealing small, discolored teeth. Teeth that, perhaps, evidenced an addiction to the sweet things they sold.

He watched, taking it all in, knowing that his grandmother would ask him later.