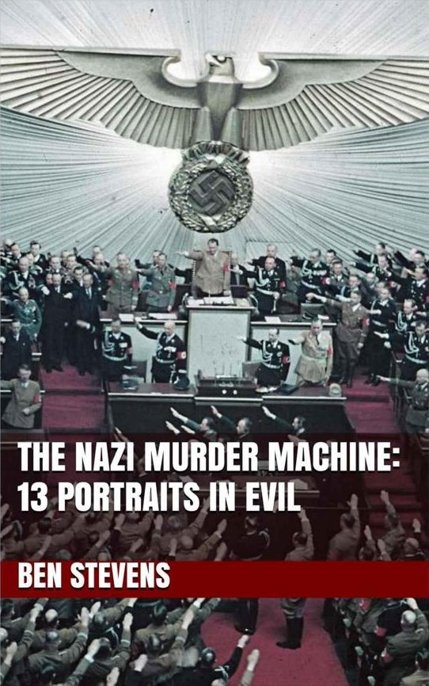 So declared Adolf Hitler, the Fuhrer
of Germany. A leader of millions, served by men and women of such appalling savagery, such merciless evil, that they make the words ‘barbarians’ and ‘pitiless’ seem all but redundant.

This book features the collected biographies of thirteen such ‘servants of Hitler’. Included are names almost as infamous as Hitler’s own –
Heinrich Himmler
,
Joseph Goebbels
– yet also the cowardly, but wholly sadistic
Irma Grese
(female guard at the Auschwitz concentration camp, in sole charge of some 30,000 inmates) and
Bruno Tesch
, one of the owners of the pest-control company Tesch and Stabenow, who amassed a fortune through the sale of the Zyclon-B gas crystals, used in the concentration camp gas chambers, to the Nazis.

For some years, the information contained in this book existed as ‘notes’, collected as part of my extensive research for my novel
The Whistler: A Murderer’s Tale
.

I dedicate this book to all those who suffered so vilely at the hands of the Nazis, and so that those who read these accounts may also say – ‘
Never again
’.

Dirlewanger, Oskar (the ‘most evil man in the SS’)

Mengele, Josef (the ‘Angel of Death’)

Becker-Freyseng, pictured wearing military uniform. Although a physician, he was given the official rank and title of ‘Captain, Medical Service of the Air Force’ by the Nazis.

Becker-Freyseng qualified as a physician at the University of Berlin in 1935 (when he was then aged twenty-five), and rose to prominence when he became a consultant to the Luftwaffe, being recognized as an expert in aviation medicine.

In 1938 he assisted with a series of important experiments concerning the effects of pure oxygen, and soon became a leading figure in the Nazi’s ‘human experimentation program’. (He had already, voluntarily, become a member of the Nazi Party.)

The experiments which took place under Becker-Freyseng’s direction commonly required inmates selected from the Nazi concentration camps. These inmates could be placed in a pressure chamber, where the effects of high altitude flying on the human body would be measured and observed. Others were subjected to freezing temperatures, or deliberately infected with tuberculosis. (This last ‘experiment’ often involved Jewish and gypsy children.)

Other inmates were forced to drink copious amounts of salt-water, with some also having it injected into their veins. All forty of these inmates (whom
Heinrich Himmler
had personally selected, at the special request of Becker-Freyseng and several other Nazi ‘physicians’) were then subjected to a liver autopsy, while they were still alive and without the use of any anesthetic.

Becker-Freyseng had the results of these hideous salt-water experiments published in a paper entitled
Thirst and Thirst Quenching in Emergency Situations at Sea
.

Captured by the Allies at the end of the war, Becker-Freyseng was one of the twenty-three Nazi physicians whose cases were heard at the so-called ‘Doctors’ Trial’. Found guilty of war crimes and crimes against humanity, he was subsequently sentenced to twenty years imprisonment. (Of the twenty-three defendants, seven were sentenced to death and the same number acquitted. The others received prison sentences of varying lengths.)

Karl Brandt, Adolf Hitler’s personal physician, is sentenced to death by hanging at the end of the ‘Doctors’ Trial’.

In 1946, however, Becker-Freyseng suddenly found that his punishment had been suspended, in return for his co-operation in assisting the Americans with ‘Operation Paperclip’ – a series of projects relating to space travel. For this, he was required to move to the US.

Diagnosed with multiple sclerosis in 1960, Becker-Freyseng died from this condition the following year, aged fifty-one.

Blobel was born August 13, 1894 in Potsdam, a city bordering the German capital of Berlin. He served in the First World War, with such conspicuous bravery that he was ultimately awarded the Iron Cross.

At the end of the war, he studied architecture, a profession he went on to practice from 1924 – 1931. Upon losing his job, he joined the Nazi Party and the
Schutzstaffel
(SS). Blobel rose rapidly through the ranks to become Commanding Officer of
Sonderkommando 4a
, a military unit active in Ukraine.

The
Sonderkommando 4a
were tasked with following
Wehrmacht
(‘Defense Force’) troops into Ukraine, where they would subsequently ‘liquidate’ all ‘racial and political’ undesirables.

In August 1941, Blobel ordered the creation of a ghetto in Zhytomyr, a city to the northwest of Ukraine, for 3,000 Jews. All of these Jews were murdered one month later.

Another massacre – of Jewish women and children – occurred at Bila Tserkva, a city in central Ukraine, August 22, 1941.

Blobel then organized the Babi Yar (‘Old Woman’s Ravine’) massacre in Kiev, September 29 – 30, 1941, in which 33,771 people died. Part of what took place was described by one of the twenty-eight known survivors, Soviet-Jewish actress Dina Pronicheva.

She told of how the victims were lined up on a ledge, and shot so that they fell down into the ravine. Pronicheva threw herself down, and there hid among the corpses even as the Germans used flashlights and guns to ‘finish off’ any wounded. Finally, when the Germans began throwing earth over the bodies, Pronicheva somehow managed to crawl out of the ravine undetected and escape.

In November that same year, Blobel took possession of a ‘gas van’ or ‘gas wagon’. As such names suggest, these were basically ‘mobile gas chambers’, with an airtight compartment into which exhaust fumes were transmitted while the vehicle’s engine was running. Death thus occurred by carbon-monoxide poisoning.

Originally invented by the Soviet secret police during the ‘Great Purge’ of the late 1930s, it was ‘adopted’ by the Nazis once
Heinrich Himmler
had discovered how the
Einsatzgruppen
(‘task forces’) – paramilitary death-squads such as Blobel’s
Sonderkommando 4a
– were continually losing members due to the mental trauma caused by shooting innocent men, women and children. Seemingly hardened Nazi soldiers would experience nightmares from which they awoke screaming; there was often no other choice but to have them committed to a sanatorium.

Testified one anonymous member of the
Einsatzgruppen
:

Testified Blobel’s driver, following the end of the war:

‘…
The back doors of the van were opened, and the bodies unloaded by those Jews who were still alive. These bodies were covered with vomit and excrement. It was an appalling sight. Blobel supervised all of this, and then we drove away. Always he drank alcohol afterwards...
’

Alcohol was often used by members of the
Einsatzgruppen
death-squads as a way of ‘blocking out’ the reality of the unspeakable acts they were committing.

Entirely sympathetic with the ‘plight’ of such men, Blobel remarked:

‘…
From a purely psychological point of view, my men had a terrible time... The nervous exhaustion of the soldiers carrying out the executions was immense… they suffered far more than those who were
being
executed…
’

Blobel was himself relieved of command of his unit in January 1942, due to his chronic alcoholism. His ‘skills’, however, soon proved too valuable to waste.

Blobel was subsequently tasked with organizing the exhumation of all mass graves in Eastern Europe (so to ‘cover-up’ Nazi atrocities, an operation given the codename ‘Aktion 1005’). Blobel perfected an extremely efficient way of incinerating the corpses – alternating layers of bodies with firewood on a frame of iron rails.

Described one of Blobel’s associates:

‘…
There were strange movements of the earth itself. Clumps of earth suddenly blew up into the air… there was smoke; it was almost like some miniature volcano... Blobel laughed, and pointing at all of this said ‘There lie my Jews!...
’

Overall, Blobel is believed to have been responsible for some 60,000 killings. Sentenced to hang by a US Military Tribunal at the Nuremberg
Einsatzgruppen
trials, he met his death June 7, 1951. Entirely unrepentant, Blobel’s last words are reported to have been:

‘…
May the German people be aware of its enemies
…’

The Sheriff and the Baby by C.C. Coburn
Watchin' The Detective: A Mystery Dinner Romance by Louise Hathaway
Memories Are Made of This by June Francis
The Guardian by J.L McFadden
How Spy I Am by Diane Henders
Arise by Tara Hudson
A Beautiful Mess by Emily McKee
His Irresistible Darling by Sarah Randall
Russia Against Napoleon by Lieven, Dominic
That's Not Your Mommy Anymore by Matt Mogk
Our partner