Read The Nearest Exit May Be Behind You Online 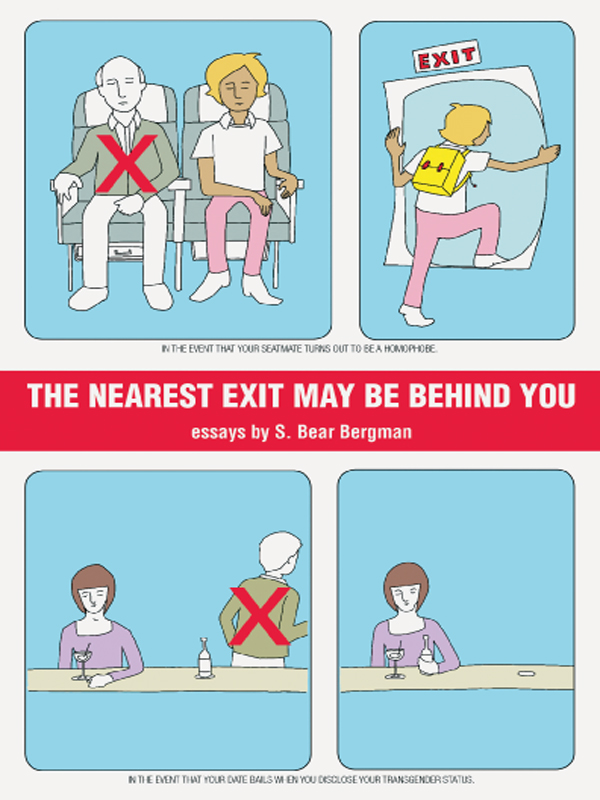 MORE PRAISE FOR
The Nearest Exit May Be Behind You
:

“Life having the unpredictable crossroads it does, I’ve often wondered how memoirists handle the problem of writing a second book. Thanks to Bear Bergman’s
The Nearest Exit May
Be Behind You
, I know the answer: one goes about it with good-humored smarts, candid humility, and a queer and delightful generosity of spirit.”
—Hanne Blank, author of
Virgin: The Untouched History

“If we could just clone Bergman’s brain and manners, the world would be a much better place, indeed. This new collection of meditations, essays, and stories about living visibly queer is complex in beautifully simple ways.”
—Helen Boyd, author of
My Husband Betty

“Bear Bergman writes circles around most people—circles that enclose so many identities, and so much insight about all of them, that you’re bound to see some of your own selves newly, and beautifully, reflected there.”
—Carol Queen, author of
Real Live Nude Girl 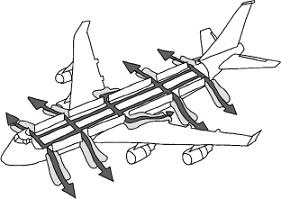 THE NEAREST EXIT
MAY BE BEHIND YOU

THE NEAREST EXIT MAY BE BEHIND YOU
Copyright © 2009 by S. Bear Bergman

All rights reserved. No part of this book may be reproduced or used in any form by any means—graphic, electronic, or mechanical—without the prior written permission of the publisher, except by a reviewer, who may use brief excerpts in a review, or in the case of photocopying in Canada, a license from Access Copyright.

The publisher gratefully acknowledges the support of the Canada Council for the Arts and the British Columbia Arts Council for its publishing program, the Government of Canada through the Book Publishing Industry Development Program, and the Government of British Columbia through the Book Publishing Tax Credit Program for its publishing activities.

“Not Getting Killed, With Kindness” was previously published in
First Person
Queer
(Arsenal Pulp Press, 2007).

For my husband, Ishai
(there’s a lot more to say, so if you don’t mind,
I’ll just take forever).

While You Were Away

Today, I Am a Man (And Other Perorations of the Tranny Jewboy)

It Only Takes a Minute, I

When Will You Be Having the Surgery?

What’s in a Name?

It Only Takes a Minute, II

The Field Guide to Transmasculine Creatures

Not Getting Killed, with Kindness

The Rule of Two

It Only Takes a Minute, III

Bowing to the Beams

Gay Men, Queer Men, and Me

It’s Always Easier If You Can Be Something They Recognize

It Only Takes a Minute, IV

Sing If You’re Glad to Be Trans

I’m grateful to a large number of people for their help in getting this second book (it’s true! second books, much harder) out the door, and when I say help I mean listening to a lot of complaining, reading drafts, talking over ideas, telling me stories, taking my phone calls, consenting to appear in the pages under their actual names (and thus be indelibly associated with me), assigning my work to their students, and otherwise bearing my assorted nonsense with good grace. Especially, I love and thank Calvin Anderson, Toni Amato, Dr John Austin, Joseph Berman, the incomparable Miss Hanne Blank, Kate Bornstein, SJ Cohen, Ivan Coyote, Malcolm Gin, Sasha Goldberg, Rabbi Jon Haddon, Levi Halberstadt, Kate Larkin, Dr Robert Lawrence, the good boy Zev Lowe, Spike Madigan attorney-at-law, my brother dog Bobby Peck, Tori Paulman, Dr Carol Queen, my partner-in-crime Scott Turner Schofield, Gunner Scott, and (with extra laurels heaped upon his precious head) my husband j wallace, who inspired a great deal of this, and whose ideas and conversation fed both me and the narrative when we were failing. I am also grateful to each of the blog readers who took time to comment thoughtfully on drafts of new work, especially Dr Leigh Ann Craig, Laura Waters Jackson, Kerrick Lucker, Vinny Prell, and Rabbi Danya Ruttenberg. The households of 480 Chetwood, HALFLAB, and the House of Consent offered hospitality and inspiration of all sorts right along. Levi Jane lay on my feet very sweetly, and was usually quite patient about waiting for her walk. My family of origin continued to come through for me over and over again, most especially my patient parents, Carlyn and Michael Bergman, my spectacular brother and sister-in-law Jeffrey and Lisa Bergman, and my uncles David Bergman and John Lessner. All the fantastic people at Arsenal Pulp Press were, well, fantastic, and deserve great thanks, as does everyone who has ever invited me to come and give a talk, perform a show, or tell some stories for the folks where they are. For better or for worse, this book is at least partly your fault.

There I am in my seat, on a small commuter plane from mumble-somewhere to home—at this point, the travel details are lost to memory. What’s still clear is that it was the last leg of a flight after several days of touring, that I was tired and somewhat wrung out from several universities-worth of hard questions and long performance days and explaining myself and my life and my loves over and over again, and that all I wanted was a little room, and a little quiet. I had aspirations of napping, or failing that, maybe some quiet time to respond to my always-on-the-verge-of-explosion inbox.

Neither one is possible, at my size and shape, with a seatmate on a Dash 8, which is one of those propeller planes with two-by-two seating up both sides of the aisle. I was seated toward the back, having chosen as usual to sit in row eighteen, seat C. Eighteen is a lucky number in Hebrew; since Hebrew numbers are also letters, the number eighteen spells out the word
chai
, or life, and I am a somewhat nervous flyer. The Dash 8 has twenty-three rows, so I was most of the way back, in my seat, and hoping to be left alone.

I had performed all of my usual magic to keep the seat next to me free. I hadn’t buckled my seatbelt or moved any spare items into the free seat. I hoped, as I always do, that if I behaved as though I might gain a seatmate at any moment the sprites of air travel would be kind to me, and allow me to travel the last hour and a half from Wherever to home in relative peace and comfort. It often works. I was full of optimism.

And then I saw her. Coming up the aisle in a pastel twin set, those sweatery markers of women of a certain class, and some sort of frosted-bangs situation on her head, with a gold cross catching the dull airline fluorescent light. With the instinct born of long experience, I somehow knew that she was holding a ticket for Eighteen A. I watched her make her slow progress up the aisle, holding her bulging tote bag and wearing an expression of general superiority, scanning ahead to see who her seatmate might be.

Her eye fell on me. Her lips tightened, her eyes narrowed, and I thought I was seeing the single woman’s customary response to the information that she was sitting next to big dude. I confess that I sometimes like to see this, actually—I have very good non-encroachment skills for such situations, and I was imagining quietly to myself how relieved she would be to discover that I could and would fly the entire way with my arms folded (to reduce shoulder span) and my hips shifted away so I could lean slightly into the aisle. I wasn’t all that pleased to be gaining a seatmate, but I figured at least she and I could coexist quietly in the small space, and maybe the next time she was consigned to the seat next to a Big Fella she wouldn’t make such a terrible face. What can I say? I’m an optimist.

I made as if to get up, so she could settle in without having to climb over me (just one more service we provide here at House of Fatboy), when I realized she wasn’t slowing down at all. She was continuing past me, into the galley, to where the second flight attendant was waiting for us to sit the hell down so she could get back up front and do her preflight things. I assumed that she was going to take the long view of the cabin, to see if there was a free seat someplace that she could swap to where she wouldn’t have to sit next to anyone or, failing that, perhaps someone with less specific mass. I wasn’t offended—hey, I’ve done it too—and, in fact, I was a little grateful to think I might get a reprieve after all.

But when she got to the back, she addressed the flight attendant instead. “I can’t sit there,” she announced. “What other seat may I use?”

I barely had time to admire her correct use of the word
may
when the flight attendant asked the next reasonable question: “What’s the matter with that seat?”

“I can’t sit
there
,” she repeated. “Anywhere else is fine.”

“Ma’am, I can’t help you unless you can tell me what the problem is,” the flight attendant responded with a hint of impatience.

My frosted erstwhile seatmate hissed, “The Gay. I don’t want to catch . . . it.”

My eyebrows flew up into my hairline, and I turned around. There was Miss Sweater Set, back to me, shoulders tense and arms akimbo, and the flight attendant wearing an expression I’m guessing matched mine. We were both dumbfounded.

Now, airlines have policies about such things. They will not reseat you because you don’t like the look of your seatmate (perhaps I should say, they historically will not, though now that Flying While Muslim or Merely Appearing to Be Muslim or Perhaps Just Bearded has become such an issue, sometimes they flout this rule). But there are rules to prevent this kind of general-duty bigotry from being acted out, and both the flight attendant and I knew it.

She looked over Miss Sweater Set’s shoulder at me, and sort of waved her hands questioningly. I could tell that she was leaving the choice up to me, either for reasons of personal values or to protect herself from a violation of airline policy, I couldn’t say. Regardless, she was clearly bouncing this particular homophobic ball into my court.

The Last King of Lydia by Tim Leach
Daddy Long Stroke by Cairo
The Complete Adventures of Feluda: Volume II by Satyajit Ray
The Successor by Stephen Frey
The Farm Beneath the Water by Helen Peters
Thunder In The Deep (02) by Joe Buff
The Fling by Rebekah Weatherspoon
The Gobi Desert
Selby Screams by Duncan Ball
The Affair by Freedman, Colette
Our partner