Read The Next Online 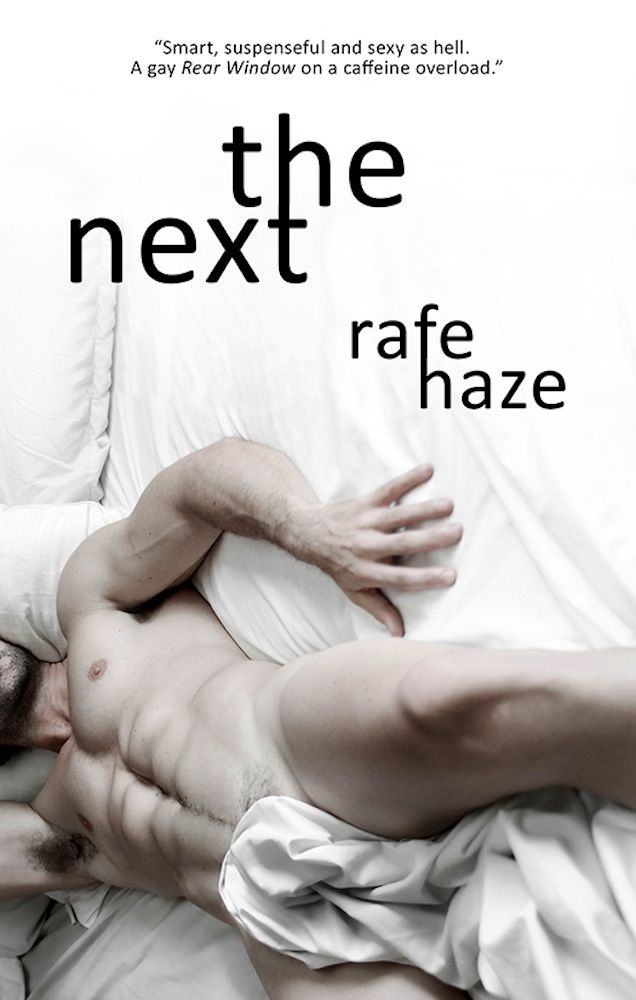 Published in the US and Australia by Wilde City Press 2014

This book is a work of fiction. Names, characters, places, situations and incidents are the product of the author’s imaginations or are used fictitiously. Any resemblance to actual events, locales, or persons, living or dead, is purely coincidental.

This book is licensed to the original purchaser only. Duplication or distribution via any means is illegal and a violation of International Copyright Law, subject to criminal prosecution and upon conviction, fines and/or imprisonment. This eBook cannot be legally loaned or given to others. No part of this eBook can be shared or reproduced without the express permission of the publisher.

It Absorbed my habits

And went away to hunt another.

But am I freed?

For now I need

When I first arrived in 1993, I was told I’d know I’d become a real New Yorker when a body pancakes on the cement at my feet at the base of a high rise. My agent disagreed. She said you become a New Yorker once you find the engorged blackened body of some glum neighbor rotting on his toilet after complaining to the super that his apartment smells foul and the pile of yellowing newspapers at his door has expanded into the hallway.

Either way, like most New Yorkers, I’d
Yep
with a grin.
Yep
with the understanding that some inevitable proximity to death would inaugurate me into a galvanized and oddly covetable world of cynicism.
Yep
with the assumption that on any one of the 7,300 days in the next two decades of cement-glass-steel-brick existence with the constant proliferation of people above, below, in front, and behind, it’d be fairly likely I’d encounter a flattened slash rotting body.

Not once in those shiny, nubile days twenty years ago did it occur to me that I might
become
one of those bodies.

At what point, as I rounded which pitch-pitted asphalt corner of one of the Empire’s seventy-two thousand city blocks, did this new grey notion begin to metastasize inside my gut? Stirring which cardboard cup of appallingly uninspiring burnt-brown Starbucks did I transform into one of the miserable sorry saps? The eyes-cast-down-on-the-subway have-nothings? One of the ones who gave up?

As one drowns, at some point the sack of bricks cuffed to your ankles starts doing you a favor. No songwriting gigs for the last six months. I had enough to pay the maintenance fee for perhaps one more month, after which I’d probably be allowed three months of non-payment before the landlord raised a true stink. The Con Edison bill had not yet arrived for this month, so I could remain burrowed in denial about grid energy. My Verizon cell and internet service would be cut off at any moment since those payments were delinquent too. I hankered to talk to nobody, but I needed the ability to accept and negotiate projects for the cash because even the cheap corner Thai food was starting to pop holes in the purse.

Was I cognizant I was slowly lowering myself with bent elbows and strained triceps into a self-cemented slough of green-brown shit, bill-by-bill, rejection-by-rejection, withdrawal-by-withdrawal? Was all that kept me from slumping into the slough entirely a telescoped ego-inflated conviction I had good songs at my fingertips, really good songs, straining as always to bleed out into tangibility? And how much longer could I continue to blame environmental influences for causing these musical lifelines to clot? My fear was that if something stays clotted long enough, one loses the ability to recognize its beauty. At what point would I just see the scars?

The sack of bricks decided my birthday was the perfect day to cuff itself to my ankle. For my first gift, I received an email from Mr. Palmer, my brother’s trailer park neighbor in a greaser town called Placerville, located in the foothills of the Sierra Mountains.

A year of shit-slurping in the muck trough had my emotional reactions well flat-lined, or at the very least well delayed, so these three words were redirected to an examination room in my brain for a clinical breakdown.
Paul is dead.
Literally three words. Intentional or not, the brevity had its own connotation. He died unnaturally. Not hit by a semi on Highway 5 or a stray bullet at McDonald’s. In those cases it would have read,
Paul was killed.
Not drugs, for Mr. Palmer would have informed me, as he had three times before, that Paul was using once again. But there was no phone call. Just one definitive short email which circumvented both conflicting emotion on the part of the messenger as well any on-the-spot further inquiry of details. Paul is dead. Passive in its tense…an insinuation of shame…

He succeeded this time.

Paul would have been thirty-seven in March.

But on that morning in December I had no time, let alone faculty, to process the impact of my brother’s death. No time to be hit with the acute awareness I now had no family left alive. No time to realize I also had no tight group of friends to substitute for family.

Writers have their egos tightly entwined with the work they produce—largely because the moment they put their names to a song, they simultaneously imagine every individual actually reads the credits in the CD inside covers and proceeds to judge them to be a success or failure. With ever-sharpening fatalism, your work and its explicit and implicit deadlines become all-consuming to the point where even scheduling dinner plans becomes a chore. One by one, your friends begin to sense this, and it drives them to other New Yorkers more reliably, authentically, and overtly grateful to see them.

I recognized the pattern. I did not change the pattern. And on the morning I turned forty, the only person I had in my life on a day-to-day, week-to-week, month-to-month basis was the one person who would walk into my apartment that birthday morning and begin
not
doing the dishes.

Juicing the last of the Palmolive, Johanna was cleaning the dried green peppers of leftover Thai food crusting on a translucent plastic container from three days ago, a Styrofoam cup that once contained banana pudding, plastic silverware, and an empty Orangina glass bottle. Yes, she was cleaning the recycling, which told me she was merely finding an activity that would allow her not to make eye contact with me.

9:17 a.m. She wanted to make this quick, so she chose a time where she would have an excuse to cut any belabored discussion short by the urgency of rushing off to work. She was wearing a dark blue suit more suitable to a law firm than the sales department of the luxury women’s clothing design company at which she spent sixty hours a week. She revealed no cleavage, messaging with absolute crispness that on this morning she was goal-driven, pointed, clean, and efficient. Nothing goes on the body of a fashion chick without a thorough subjugation of purpose—from the geographic source of the silk, the centimeter of heel height, the luster of gold on the bangle, the direction of the point of the collar, to the goddamn choice of stitch for the inseam.

Ten seconds after I’d learned my brother had committed suicide, and I was actually analyzing inseam stitching.

“Johanna, just recycle the shit and get it over with.”

“You’re disgusted with me and me alone. I’m feeling better already.”

“I’m stopping this because...of so many reasons.”

She wanted me to let her off the hook rather than force her into the shithole of specifics, but I remained silent and forced her to struggle.

“We talked about them,” she said.

We did, but I shrugged my shoulders anyway and adopted my shell-shocked facial expression just to anger her, leaving her no choice but to retaliate.

“Your
not
remembering the reasons is one of them.”

“Johanna,” I paused until her averted eyes finally wandered back to mine. “Leave.”

She was too surprised at my own crispness and efficiency to acknowledge it. She instead circumvented the command by focusing on the closed dusty, thick, red curtains.

“How can you write in such a depressing environment?”

Her reaction was scripted and inorganic, precipitated by a year of lunchtime bitch fests with her well-coiffed colleagues, inordinately high-priced, coffee-clutching therapy sessions, martini fueled Sex-in-the-City girl-power nights out with her bedazzled gal pals, and isolated sweat-slicked thoughts during furious sprints on treadmills at Equinox:

“I give up trying to convince you not to give up.”

To me, the saddest part of her final words was not the appropriateness of the sentiment; it was its unoriginality. Even more pathetic was how unaware she was at how uninspired the notion was. My thoughts immediately circled back to how pathetic I was to focus on originality rather than the fact that Johanna was completely justified in giving me this particular middle finger, no matter how it was phrased.

She shrugged her petite shoulders as her final gesture to me, which, when punctuated with the curt clicking of her heels towards the door, communicated the ultimate disgust she’d felt since the day I stopped bringing in enough income to buy her six dollar soy caramel decaf latte every morning at Starbucks. Since the day I stopped paying a hundred and eighty-two dollars a month for the Equinox gym membership just to take the core boot camp classes with her and the room full of others desperately substituting tone and tightness for fulfillment and personality. Since the day I encouraged her to begin making a clear distinction between who she is at work and who she is away from work, and valuing the latter.

She closed the door behind her.

Thud. As conclusive and as brief as Mr. Palmer’s email. So much thudded away. Thud—those inane but energetic ongoing political and philosophical discussions concisely ended. Thud—the sexual ecstasy that once headlined the front page of our relationship suddenly castrated to a tiny bubble thought in the cartoon section. Thud—the delight of finding that kosher pizza joint and proclaiming it as our secret go-to place on Friday nights deteriorated into a piquantly annoying place to be avoided. Thud—the flirtation with marrying her and having kids curtailed with a dry, irreversible “No thank you. Not with you.” Thud—I no longer deserved her love, nor did I ever to begin with. I could feel that sour pill disintegrating my guts like a mug full of Drano.

Minnie, the toy dog, yappity yap yapped as she passed Mrs. Abraham’s door, mocking the tragedy. I listened to the remaining clicks of her heels down the tile stairs.

Bonds of Matrimony by Fox, Carrigan
Silver Six Crafting Mystery 01 - Basket Case by Nancy Haddock
Up All Night-nook by Lyric James
A Fit of Tempera by Mary Daheim
DEAD: Blood & Betrayal: Book 11 of the DEAD Series by TW Brown
Duty from Ashes by Sam Schal
Cain’s Book by Alexander Trocchi
The Romantic by Barbara Gowdy
When Love Comes by Leigh Greenwood
Sea Lovers by Valerie Martin
Our partner