Read The Night Before Online 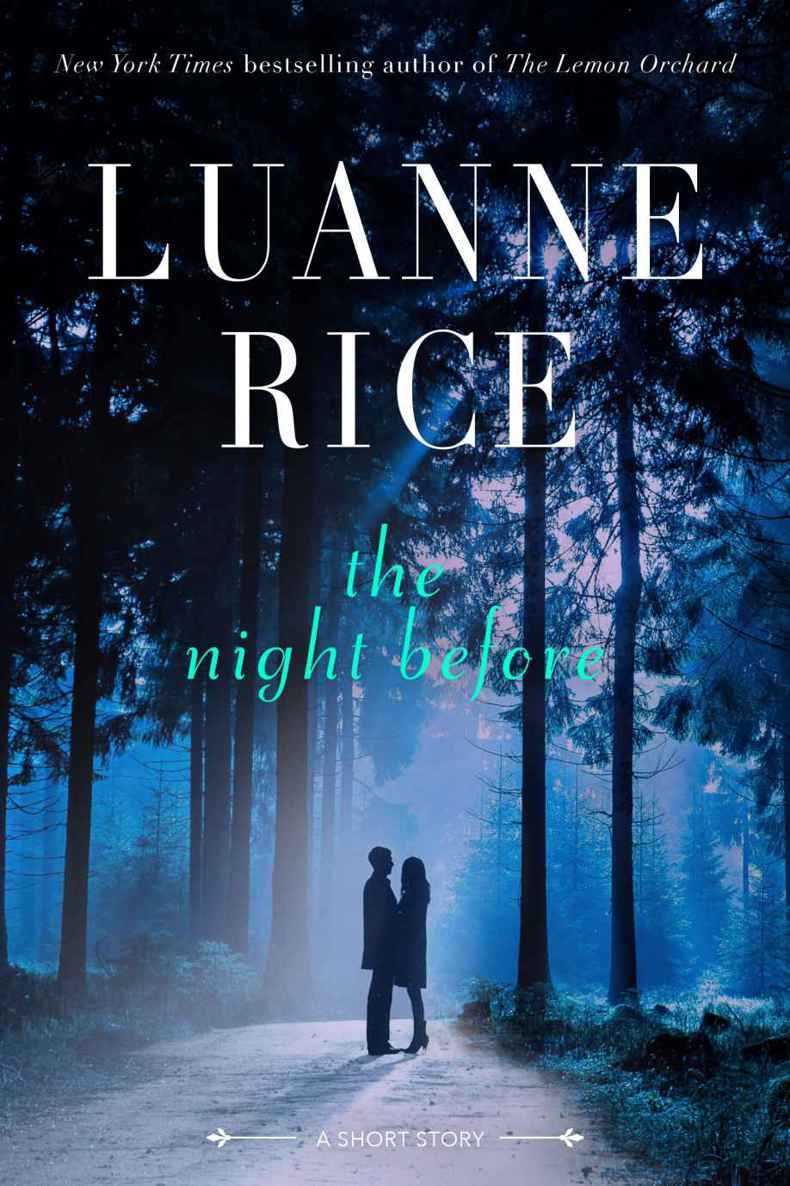 No portion of this book may be reproduced, scanned, or distributed in any print or electronic form without permission

This book is a work of fiction and any resemblance to any person, living or dead, any place, events or occurrences, is purely coincidental. The characters and story lines are created from the author’s imagination or are used fictitiously.

T
he night before the wedding
a wild thunderstorm rolled down the Connecticut River. Awake for good, Lydia Madison got out of bed and padded across the rough board floor to close the windows and watch the lightning. The Christmas trees, silvered with summer dust from the field and salt from Long Island Sound, looked so otherworldly in the intermittent flashes that for a moment she forgot to worry that the field would be soaking wet for the ceremony.

A crash made her jump; had the house been struck? No, it was just thunder, accompanied by whipping wind. She felt the walls shake. White curtains blew horizontal, drenched from the rain, as she lowered the windows.

She thought about making a quick sketch. It could be her gift to the couple, and she would call it
The Night Before.
It would have double meaning: a connection to Christmas, and how they had met here last winter—he had been working the farm year-round, and she’d been hired for the season to sell trees—and it would also be a reminder of tonight’s tempest—beautiful tumult, more intense than the average summer storm, just passing through.

So that’s what she would do, make a drawing. Sleep was over for the night. She pulled on jeans and a chambray shirt and walked down the back stairs, hearing thunder crack just outside. Entering the kitchen, she was shocked to smell coffee.

Danny Byrne, the groom-to-be, stood at the screen door with Tally, Lydia’s blue merle collie, by his side. They stared out at the rows of white spruce, thick and ordered and magical in the pouring rain.

“Good morning,” she said. “If four-thirty counts as morning.” At the sound of her voice, Tally romped over. Lydia buried her fingers in the collie’s long blue-gray fur, snagging tangles in the silk.

“Is that why you’re up?” she asked. “Or you nervous about today?”

“No, I’m fine,” he said. But she heard it in his voice. He ran her family’s farm, and although he got up early, it wasn’t usually
this
early; she was often awake before him, at her easel with coffee, catching the day’s first light. Lydia hid a smile; he
was
nervous.

“I hope it stops soon,” Danny said. “I know the trees need rain, but there’s going to be mud.”

“Give it ten minutes,” she said. “The storm will blow through, and the day will be perfect. That’s my prediction.”

“I wish her mother was coming.”

“It’s killing her to be apart.”

“Her mother says you’re her family now,” she said. “Already, even before the wedding.”

He didn’t respond to that. The deluge began letting up, and the rumble of the thunder sounded miles away, perhaps across the river in Old Saybrook now, or moving across the Sound toward Orient Point. Tally finished her bowl of food, clattering it across the floor as she ate the last bites, then ran to Danny’s side. He opened the screen door, and together they headed out into the rain.

Lydia watched them disappear into the trees. She picked up a piece of charcoal, opened her sketchpad, and began to draw. She sketched a stand of white spruce and slanting sheets of rain, and she left areas of white to denote that big flash of lightning that had pulled her from bed.

Black Hall had always been a haven for artists. At the turn of the last century they had taken the train out from New York, set up their easels on the riverbanks and rocky shore, attracted by the stunning scenery and the play of light with so much water to reflect it. Lydia was transfixed by the line where the river met the sea, where the storm met the land.

She was drawn to edges. Her grandfather Frank Madison, one of the early American impressionists and the first of her family to settle in Black Hall, had said, “There is something about a boundary.”

Back when she was studying painting at Black Hall College of Fine Arts, her teacher—a man obsessed with her grandfather—had taken the class to San Miguel de Allende, a charming hill village in Mexico; it was the last week of July twenty years ago, and that’s where she’d met Sara Castillo, the bride’s mother.

Her second day in Mexico, she had wandered away from the plaza in San Miguel, alone up a steep, winding road, attracted to a sharply graded lemon grove on a promontory overlooking the valley. The straight rows of trees reminded her of home, her family’s spruce farm.

She thought about the people who had planted them, wondered if they, like her family, worked the land together, if the mother loved farming as much as the father, if she had raised her children with soil under their fingernails. One of the boys, high on a ladder, sang a ballad. Painting depth, shadows, and a thousand shades of green, Lydia could almost hear her mother whispering in her ear and lost track of the time.

At the sound of the voice, Lydia turned and saw a young woman about her own age approaching through the lemon trees.

The young woman came close, leaned toward the canvas. She wore a white muslin blouse over work pants, dirty Adidas on her feet. Her thick black hair was tied back with red yarn. Up closer, Lydia saw she was older than college-aged; when she smiled, she had crinkled sun lines around her eyes.

“Not bad,” the young woman said.

“Your perspective’s a little off,” the young woman said in perfect English with a heavy accent.

“No,
chica
,” she said. “But this is San Miguel. You think you’re the first artist to paint the valley? I check out all the work. Yours is really pretty good. It’s not bad at all.”

“Do you live here?” Lydia asked, looking around, seeing no houses.

“I work,” she said, gesturing at the rows of lemon trees.

“Your family owns the orchard?”

She snorted. “Come on, what world are you from? I pick lemons so
gringas
can drink lemonade.”

“Sorry,” Lydia said. She started wiping her brush with a rag, wanting to get out of there.

“
Mira
, I’m an
idiota
,” she said, clamping her hand around Lydia’s wrist. “I just had an attack of being jealous, but it’s gone now. My whole family works the orchard together, what do I have to complain about? That’s my brother singing. You’re with one of the college groups,
sí
?”

“I had to drop out,” she said. “I used to go to University of Texas at El Paso. Yeah, I’m Mexican, but I was on an exchange program. I stayed with my grandma in Ciudad Juárez, I just crossed the border with my student visa. It was so easy, I didn’t know how lucky I was.”

“My mom got sick. My papá told me she was getting really bad, and I couldn’t concentrate on anything, so I left school.”

Lydia stopped moving. “What happened to her? Is she okay?”

“I’m sorry.” Lydia felt dizzy from the paint fumes or the high altitude or the memory of her mother’s face. Then, “Did you get home in time? To see her before she died?”

She nodded. “I came back with some Faulkner books I was going to read to her, and souvenirs from the U.S., and that’s about it. She passed after I was there for one day; it was like she waited for me. We went through the
novenario
—nine days of mourning and Masses. It wasn’t enough. Why don’t we mourn nine
years
when our mothers die?”

She laughed. “How are you ‘sort of’ Catholic?”

“Born that way, went to Star of the Sea Academy elementary school, and lapsed big-time after my mother died.”

“Oh, you have all my sympathy,” the young woman said, and gave Lydia a spontaneous hug that made her eyes sting. “When did you lose her?”

“When I was twelve. How long ago for you?”

Lydia shook her head. She glanced at the oil painting, layers of green overlapping into the bright blue sky, and wondered how she could tell a stranger, a Catholic stranger, that art was her prayer, that only through painting could she contact something that felt close to divine, close to her mother.

“
Buena suerte
to you on that,” the young woman said, blessing herself, then touching her stomach, which Lydia suddenly noticed was round under the loose muslin shirt; she realized the young woman was pregnant.

“Did you return to college?” Lydia asked.

“No,
chica
. No money for that. Besides, I can’t return to the States.”

“I got deported, and once that happens, you’re never coming back.”

“I lost my student visa when I dropped out,” she said. “But I was in love. He was a student at school. I’d go back, cross the border, I knew how. It used to be easier, if you went at the right time, knew the right people. I stayed at my grandma’s in Juárez; she liked me there, I remind her of my mom. And I’d come and go, whenever I wanted. But one day they caught me, sent me back, and I can’t return.”

“What about your boyfriend? Or is he your husband?”

“Got to get back to work,” she said as church bells began to ring, echoing up the valley.

“What’s your name?” Lydia called as the young woman hurried along a straight row between trees.

“Sara,” she called over her shoulder.

The young woman had waved, disappearing into the orchard.

The Black Hall art group was staying at Casa Luna, a small hotel in the center of town. Every morning they ate breakfast in a terracotta courtyard whose ancient walls were covered with bougainvillea; afterward they separated into small groups and went off to paint together or singly.

Lydia spent every night with Morgan Drake, the professor. Being together on the college trip was both delicious and against the rules. She didn’t want to jeopardize his chance for tenure, so she’d sneak out of his room at dawn and return to hers for a couple of hours of deep sleep before breakfast.

Each day she’d say goodbye to the others and climb the hill. She would return to the orchard, work on the painting she had started that first day, and sketch the rest of the landscape: a rustic barn, two hungry-looking black horses, and rows of lemon trees. Mainly she would wait for Sara, who brought green glass bottles of cold water straight from the well and took her breaks sitting on a boulder beside Lydia’s easel.