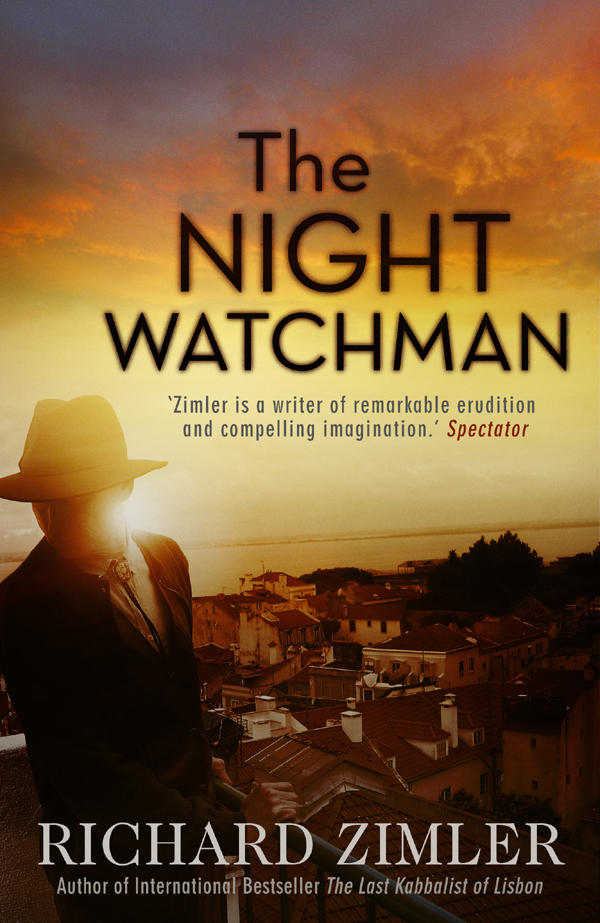 Richard Zimler
was born in New York but has lived in Portugal for the last 24 years. His novels have been translated into 23 languages and have appeared on bestseller lists in many different countries. Four of his novels have been nominated for the International IMPAC Dublin Literary Award, and he has won literary prizes in America, France, Portugal and the UK. His website is
www.zimler.com
.

First published in the UK by Corsair,
an imprint of Constable & Robinson Ltd., 2014

The right of Richard Zimler to be identified as the author of this work has been asserted by him in accordance with the Copyright, Designs and Patents Act 1988

‘It is by no means certain that our individual personality is the single inhabitant of these our corporeal frames . . . We all do things both awake and asleep which surprise us. Perhaps we have cotenants in this house we live in.’

‘Once believed to be a rare and dramatic aberration, Dissociative Identity Disorder is actually a highly evolved survival mechanism acquired by some individuals as they cope with severe and prolonged trauma, abuse, and fear.’

For Alexandre Quintanilha and my readers in the UK, Australia, South Africa and New Zealand.

I am extremely grateful to the officers of the Judiciary Police in Portugal who spoke to me at length about their work, answering all my many questions with great patience: José Braz, Verissimo Santos Milhazes and José Carlos Nunes. Any mistakes in police procedure contained in this book are purely my own.

I want to express my heartfelt thanks to Alexandre Quintanilha, Cynthia Cannell, Jordi Roca, Peggy Hageman and Isabel Silva for reading the manuscript of this novel and giving me their invaluable comments. As always, I’m very grateful for the support of all the good people at Constable & Robinson, especially Sarah Castleton, James Gurbutt, Andreas Campomar, Sam Evans and the late Nick Robinson. I owe a great debt in particular to Nick for all the kindness and generosity he showed me over the past decade. He will be sorely missed.

A special hug for Chris Boreggio and Jo Coldwell.

‘Maybe our second chances are the only ghosts who ever appear to us.’

As I scanned my notes at my desk, the murder suspect sitting across from me told me that he and his wife had never had children but that he had pictured his son every night in bed for the last month.

‘My imaginary one. We do things together all the time.’

His watchful eyes seemed to be yearning for my trust. While weighing my options, I blew on my steaming tea. ‘All right, so how old is this imaginary kid of yours?’ I asked as I jotted down the date in my notebook:
Friday 6 July 2012, 10.17 a.m.

‘He’s seven,’ the suspect replied. ‘At least, he usually is. It can depend on what I’m daydreaming about.’ He bit his lip and looked up at the ceiling, as if needing a moment to script more of his story.

‘Come on, we both deserve better than you making up some crazy fantasy for me,’ I told him, and I pointed towards the stack of files sitting on the chair behind my desk. ‘I have at least twenty cases competing for my time, so if you’re just pretending to—’

‘Don’t you ever dream about what might have been?’ he cut in desperately. He took a rushed sip of his water. I realized he was running on nervous energy. His name was Manuel Moura. He was thirty-two years old but he looked years younger – more like a college student. He was a high school chemistry teacher.

‘So you’re serious about this made-up kid?’ I asked.

‘I’ve never been more serious about anything in my life.’

‘Does he have a name?’ I asked, and I felt the small, mild, tentative loss of balance we sometimes feel when we take a step forward into someone else’s story.

‘He has silky black hair cut in bangs, and big green eyes – an alert, intelligent face.’ He smiled broadly at the beauty he’d created. ‘A bright kid, outgoing. And brave – really brave.’

Moura had light brown hair, combed neatly to the side, and his wire-rimmed glasses made him look shy and secretive – a bit like Harry Potter. Since I regarded poisoning his wife as anything but courageous, I said, ‘It sounds like you’re trying to tell me – without actually saying it – that Miguel takes after his mother.’

Moura held up his hands as if surrendering – regrettably – to the truth of what I’d surmised, then took off his glasses and wiped his eyes. He looked more adult without them – more honest, too.

He surveyed my office, left, right, then left again, craning his neck out in a way that would have seemed comical under other circumstances. ‘No photos of your family on your desk, no paintings – it’s kind of cold in here,’ he said. ‘Don’t you want anything personal in your office?’

He’d happened on one of my continuing sources of discomfort at work. ‘Police policy,’ I told him. ‘No diversions for you, and none for me either.’

‘The detectives on TV always give their offices lots of personality,’ he pointed out.

‘A number of things happen on television that don’t happen around here.’

‘And they nearly always get their cases over in forty-eight hours.’

‘Let me guess, you watch
CSI,’
I replied in a weary tone; this wasn’t the first time I’d been compared unfavourably to fictional investigators.

‘Yeah, but I only like the version that’s set in Las Vegas.’

‘The thing is, police dramas are all scripted to keep you on the edge of your seat, and this . . .’ – here, I circled my hand in the air to indicate my office and, more generally, the dimension in which it existed – ‘. . . this, Mr Moura, happens to be what most people would call real life. People around here are only rarely entertaining and, between you and me, some of them could be considered pretty incompetent. Just so you know, it took a whole week to get your wife’s tests for toxic substances back from the lab. And that was with me pushing hard.’

‘But you knew I was responsible as soon as you got the report?’ he asked in a hopeful tone.

He seemed anxious to think better of me, which struck me as both loopy and endearing. ‘Chemistry teacher, cyanide poisoning – connecting the dots didn’t require a higher degree in logic,’ I told him.

He gazed down as though he were having second thoughts about opening up to me. To win back his trust, I leaned towards him and whispered conspiratorially, ‘I’ve been known to defy the rules on occasion.’ I turned around the coffee mug where I keep my pens so he could read its big, blue-lettered message:
I
♥
BLACK CANYON.
‘My wife had it made for me,’ I told him. ‘She runs a ceramics gallery.’

He smiled with gratified surprise – probably just like his imaginary son – and asked, ‘Where’s Black Canyon?’

‘In America – in southwest Colorado.’

‘I thought I heard a slight accent!’ he announced proudly.

‘I was born near there.’

‘It must be really far away – I mean, not just geographically.’

‘I bet.’ He gazed down, considering his options. By the time he looked back up, he was once again eager to tell me about what most mattered to him – but in his own idiosyncratic way. ‘My son is really lovable,’ he told me. ‘Everybody takes to him.’

I took a quick gulp of my tea and wrote
Suspect’s Fantasy Life
in my notebook; whether indicative of insight or lunacy, this was just the kind of thing I liked to get down on paper. I had stacks of photocopied notes from my interrogations at our apartment, though what I intended to do with them was still a mystery.

‘Who’s everybody?’ I asked.

‘Other teachers, neighbours . . . Wherever we go, everybody can see he’s special.’

Moura went on to tell me that picturing his make-believe son was the only way he could get to sleep at night. As he spoke, he knitted his hands together. It seemed as though he needed to keep himself under tight control.

Nodding to himself, anxious to convince both of us of the rightness of what he was about to say, he told me that his wife sent their lives spiralling off towards disaster when she began an affair with the philosophy teacher at his school. ‘She behaved like a real whore!’ he said angrily.

I mumbled to myself:
Good authors, too, who once knew better words . . .

‘Song lyrics in English pop out of me sometimes – it’s a nervous habit,’ I explained.

‘No problem. You know the worst part?’ he asked, sneering. ‘The guy she had an affair with is a total asshole!’

‘But she obviously didn’t think so,’ I said challengingly. ‘And it seems to me she had the right to think whatever she wanted.’

‘Maybe so,’ he admitted.

‘Maybe or yes?’ I insisted; suspects who hurt women tended to make me forget my tactics for maintaining their trust.

‘You’re right,’ Moura agreed, but I could see it was only to get me off his back.

‘Look, I’ll tell you something I was forced to learn real young,’ I said. ‘Men who regard their wives and girlfriends as property are responsible for far more than their fair share of the unhappiness in our world.’

‘Yeah, I can believe that,’ he conceded. ‘So how long have you been a policeman?’

‘You must have seen some pretty bad things in your time.’

I thought of saying,
Cruelty never goes out of style,
but it sounded too glib – too much like Philip Marlowe or one of the other fictional detectives whose cases I imagined myself solving when I was a kid. ‘So what do you and Miguel do together while you’re trying to find dreamland?’ I asked instead.

‘Mostly we go to the beach in Caparica. I take his hand and we run down to the edge of the ocean. He likes to stand still and watch the sand by his feet slide away – it makes him feel like he’s skating. It makes him laugh. Me, too!’

Moura explained that he also took his son to the Feira da Ladra, the sprawling flea market behind the Pantheon, because the boy was wild about old farming tools and cooking gadgets – just like his dad, of course. In front of the tiger enclosure at the Lisbon Zoo, Miguel told his father that he wanted to be ferocious and fearless, and to have razor-sharp teeth. He wanted to run through the Himalayan forest. ‘And I don’t want anyone to be able to catch me!’ he added, as if it were an absolute necessity.

A CHILD OF A CRACKHEAD III by speight, shameek
The Fantastic Secret of Owen Jester by O'Connor, Barbara
Bewitched, Bothered, and Biscotti: A Magical Bakery Mystery by Bailey Cates
Knockdown: A Home Repair Is Homicide Mystery by Sarah Graves
Windburn (The Elemental Series #4) by Shannon Mayer
Surrender To The Viking by Joanna Fulford
Dragonriders of Pern 6 - Dragondrums by Anne McCaffrey
Alarums by Richard Laymon
An Angel for Dry Creek by Janet Tronstad
Handle With Care by Jodi Picoult
Our partner