Read The Not So Secret Emails Of Coco Pinchard Online

The Not So Secret Emails Of Coco Pinchard 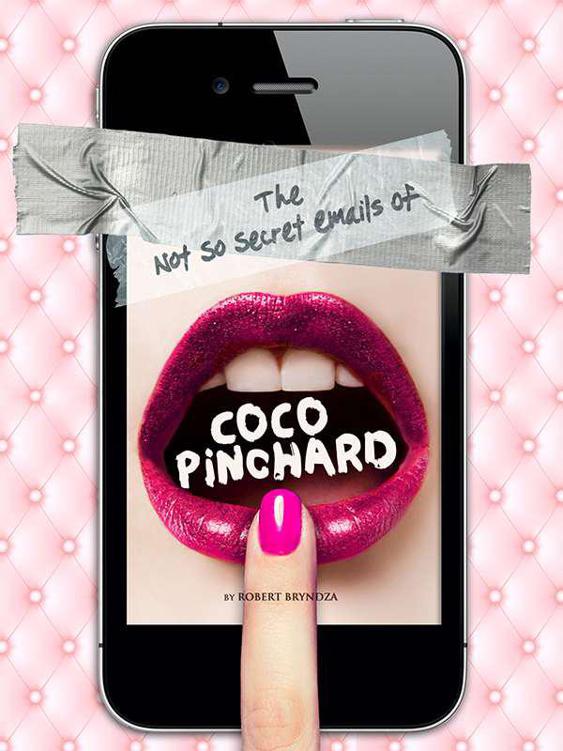 The Not So Secret Emails Of Coco Pinchard

Published by Team Bryndza Books, June 2012
For more information about the author, please visit
www.teambryndzabooks.com
www.facebook.com/teambryndza
Copyright © Robert Bryndza, 2012
Edited by Ján Bryndza
Cover Design by
Veronica Licakova
e-book formatting by
Guido Henkel
This book is a work of fiction. Names, characters, places and incidents either are products of the author’s imagination or are used fictitiously. Any resemblance to actual events or locales or persons, living or dead, is entirely coincidental.
All rights reserved. Except as permitted under the U.S. Copyright Act of 1976, no part of this publication may be reproduced, distributed or transmitted in any form or by any means, or stored in a database or retrieval system, without the prior written permission of the publisher.

For Ján, whose help, encouragement, and sheer brilliance made this book possible.

Merry Christmas? Mine isn’t. The in-laws arrived last night. Meryl and Tony biked down to London from Milton Keynes on their new Tandem. They had to sit in the airing cupboard with the heating up for a good hour, thawing out. Rather cancels out their boast that they are carbon neutral! Rosencrantz picked up his Nan Ethel from her Nursing Home, and she began with the usual, “this might be my last Christmas,” before inviting herself for Christmas next year, and Easter, and Mother’s Day…

Daniel was working late (the curtain didn’t come down on his Pantomime till eleven) so to inject a little Christmas cheer in to the house, Rosencrantz, Ethel, Meryl, and myself decorated the tree in the living room. Tony spent an age constructing logs and newspaper in the fireplace, which at the touch of a match sprung into a roaring crackling fire. He excused himself when the decorating became competitive. We were divided into two camps style-wise. Ethel and Meryl favoured an all silver display of baubles, whereas I wanted my usual array of multi-coloured baubles, tinsel, and the cross-eyed cotton wool bearded Father Christmas Rosencrantz made from bog rolls as a child. It was an exhausting series of compromises with no one wanting to spark a row so early. They are here for a week. I wish I had the guts to say, “back off bitches!” However, I didn’t so we decorated one side of the tree silver and the other multi-coloured; with an agreement it would be rotated daily. Rosencrantz sensibly joined Tony outside in the garden and helped him oil the Tandem.

Christmas Day seemed to begin with promise. I had been worried about having to cook lunch, but I had a surprising saviour in the shape of our new Sky Plus box and HD Television. If it were not for them, I would have had much more criticism over my choice to serve individual Birds Eye turkey dinners.

Thankfully, the hubbub surrounding the sixty-two inch flat screen, and being able to pause the Carol Service from Kings College, even though it was broadcast live, drowned out the ping of the microwave.

Ethel was further diverted when Rosencrantz told her we had bought them using the advance for the publication of my novel, Chasing Diana Spencer. She couldn’t believe I had been paid for “that rubbish.” Still, it all covered up, quite nicely, the fact that I can’t cook.

My presents were as follows

Meryl and Tony gave Rosencrantz, The Dangerous Book For Boys. Which is lazy gift giving if you ask me. It’s point-of-sale in almost every supermarket thus required no effort on their part. Ethel took one look at it and said,

“Well, e’s a good looking gay lad!” said Ethel. “My present will keep ‘im safer than your present!” She had a point.

I gave everyone signed copies of Chasing Diana Spencer, since they’ve been too tight to actually buy it. M + T put on a good show of over-excitement. Ethel just dropped hers in her handbag without a glance at what I’d written inside. She was more interested in the book M + T had bought her, the number-one best seller Window Box Winemaking.

“Did you know, ‘er and Coco ‘ave the same lit-ral agent?” said Ethel pointing to the overly grand cover picture of its author, Regina Battenberg.

“She was a scream on Jonathan Ross last week,” said Tony. “Really gave him a run for his money.”

“Have you met her Coco?” asked Meryl in an awed tone.

I said we had been in the same branch of Waterstones for our book signings.

“’Er queue must have been out the door, compared to yours,” said Ethel with a glint in her eye.

Rosencrantz, seeing the first festive row brewing, suggested we wake up his Dad.

It amazes me that all Daniel needs to do is lumber downstairs mid-afternoon in his dressing gown and he is greeted with such excitement.

“Mum, Sis, Tone,” he said handing them little presents from his dressing gown pockets. Meryl and Ethel were squealing as if they were at the stage door after a David Essex concert. Daniel hadn’t even brushed his teeth.

He gave me a kiss and pulled a little box wrapped in white ribbon out of his dressing gown pocket. It was that certain shade of green which made me think; Tiffany! We’ve met in Regent Street twice to look at the Christmas lights and each time he has guided us towards Bond Street, and let me linger outside Tiffany, raving about a necklace. I whipped open the ribbon, the box fell apart, and nestling inside was…an iPhone.

“A phone?” I said, with forced gaiety.

“This isn’t any phone,” said Daniel. “You can email, listen to music, can’t you son?” He grinned, pulling an identical box out of his other dressing gown pocket.

“We don’t like toilet language,” said Tony, shielding Meryl as Rosencrantz jigged across the living room, narrowly avoiding the Christmas tree — which had been turned on its silver side for Christmas Day.

“You’ll both need your phones to keep in contact with me!” Daniel exclaimed grinning.

“Why do we need to keep in contact with you?” I said.

“Well,” he said. “I’ve just signed a contract, making me the new Musical Director of the Whistle Up The Wind North American Tour 2009!”

Rosencrantz stopped jigging. They all looked at my frozen smile.

“Whistle Up The Wind,” said Daniel. “It’s a new musical.”

“Don’t you mean Whistle DOWN The Wind?” said Rosencrantz.

“No,” said Daniel. “Whistle Up The Wind. It’s sort of, an unofficial sequel. Nothing to do with Lloyd-Webber,” he added. “I start rehearsals in a couple of weeks…”

They all looked between his joy and my disbelief.

“This is my dream job!” he said impatiently. “Launching a new musical… An American tour too…It’s eighty grand!”

At the mention of money, everyone became animated. Ethel tottered forward and clasped his face saying,

“Oh my clever boy. If yer Dad weren’t dead e’d be so proud.” Grabbing her Bucks Fizz, she made a toast to “absent friends… and lots of dosh.” They all clinked glasses and I left the room. Daniel followed me into the kitchen.

“You choose to tell me, out of the blue in front of everyone?”

“It was an exciting announcement!” he gestured with his arm. His dressing gown flopped open. He had nothing on underneath.

“What timing Little Danny has!” he grinned raising his eyebrows and looking proudly at his tackle.

“Oh put it away!” I said getting even madder. “You were too scared to tell me, weren’t you? Until you had the protection afforded by having your Mother and Meryl here.”

“I need to be successful too,” he hissed doing up his dressing gown. “You spent all this year writing your book.”

“Why did I have to find out like this?” I said.

“You’d have tried to persuade me against it!” He was surging into a full-on rage now.

“You think I want to conduct the music for pantomimes every Christmas for the next twenty years?”

“It’s great money Daniel, and you’re good at it.” He kicked the Pantry door and stalked around the kitchen with a red face.

“You haven’t even read it, have you?”

“Rentaghost: The Musical also went bust owing you thousands,” I said becoming shrill. “And when The Lady Boys Of Bognor Regis went into administration I had to get another job to pay off the band’s parking fines!”

“It was you who offered to lend them the Volvo, Coco!” He shouted. “Their instruments wouldn’t fit on the bus!”

“Daniel,” I said. “I would love you to work on a successful musical, but sadly, you sign awful contracts and make awful decisions, usually ones which exclude me!” At that point, Meryl came into the kitchen.

“Sorry to interrupt,” she said. “But Mum just sat on the remote control and now everything is in Spanish.”

Daniel glared at me and followed her out. I was expecting him to come back in and resume our discussion, but after ten minutes I found him sat on the sofa with Ethel.

“Ere Coco,” she said. “Warm up some dinner for my clever boy, it’s nearly time for the Queen’s speech.” Daniel refused to make eye contact.

“I need to talk to Daniel,” I said pointedly.

I stalked over to the Christmas tree and turned it round to the coloured side. “You know where the microwave is,” I said.

I grabbed my Christmas fags, came out into the garden, and smoked on the steps by the shed. They should warn you, I thought as I looked out over the London skyline, that if you marry young there is a high chance your loved one might turn into a complete and utter prat.

When it got dark and I’d developed a rattling in my chest I came back in. The Christmas film had just finished and Meryl pretended everything was fine by insisting we all play a game she’d brought called Rapidough. It’s like Charades, but your team has to guess what you are making out of modelling clay.

Meryl divided us into two teams. It was me, Tony and Rosencrantz versus her, Ethel and Daniel.

After several glasses of Drambuie, it was neck and neck…

I just needed to get my team to correctly guess what I was about to make and we would secure victory.

Meryl (the score mistress) offered me the cards and I picked one with the phrase ‘cock and bull story’. Ethel took one look at my face and I saw her murmur to Daniel, “She’s gonna lose.”

I gave her a defiant smile.

Meryl flipped over the egg timer and Rosencrantz began to film on his new iPhone. (I had insisted on playback after some cheating from Ethel.) Feeling the pressure to win, I made the first thing that came into my head; a rather large Bull, and running out of modelling clay, a rather tiny Penis…

“So this is my payback?” said Daniel glaring. “Embarrassing me!”

“Now thas’ crude Coco,” said Ethel (This is the woman who every year takes out her teeth, sticks them up the turkeys arse, and makes it talk.)