Read The Ocean of Time Online

The Ocean of Time 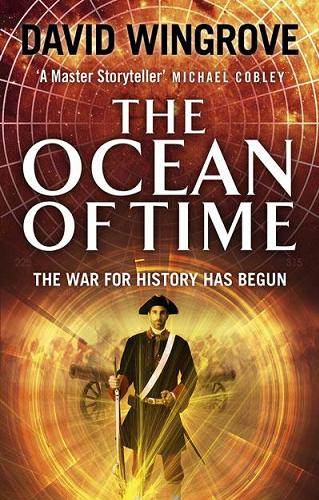 Part 8: A Stitch in Time

Part 10: The Language of the Blood

The War For Time Continues.

From the frozen tundra of 13th Century Russia to the battle of Paltava in 1709 and beyond, Otto Behr has waged an unquestioning, unending war across time for his people.

But now a third unidentified power has joined the game across the ocean of time, and everything Otto holds dear could be unmade ...

David Wingrove is the celebrated author of the Chung Kuo series; co-author of
Trillion Year Spree
with Brian Aldiss; and the
Myst
novels with Rand Miller. He lives with his family in north London.

The Empire of Time

The Ocean of Time
Roads to Moscow Book 2
David Wingrove

Arkadevich, Yakov
— Master of the Carpentry shop at Cherdiechnost, in 13th century Russia.

Arminius
— also known as Hermann, Chieftain of the German Cherusci tribe and victor over the Roman legions in the Battle of the Teutoburg Forest (17BC to AD21).

Baeck, Leo
— son of Minister in German government in 2343.

Behr, Otto
— our narrator, a German ‘
Reisende
’ or time traveller.

Blagovesh
— The Bandit King; leader of the marsh bandits in 13th century Russia.

Bobrov
— Russian time agent and killer of at least a dozen German agents.

Chkalov, Joseph Maksymovich
— otherwise known as Yastryeb, ‘the Hawk’ and Grand Master of Time for the Russians.

Franke, Roland
— student at the Akademie in Neu Berlin,in 2343.

Gehlen, Hans
— aka, ‘The
Genewart
’. Architect of Four-Oh, scientific genius and inventor of time travel. Has existed for 200 years as a gaseous presence in the midst of Four-Oh’s artificial intelligence.

Gruber
— one of the eight
Reisende
carrying Seydlitz’s DNA. ‘Turned’ by the Russians.

Haushofer, Klaus
— liaison officer at the Akademie in Neu Berlin in 2343.

Hecht
— ‘The Pike’; Meister of the Germans at Four-Oh.

Hecht, Albrecht
— Hecht’s older brother and keeper of the archives at the Haven, way back in time.

Hudner, Irmin
— ‘Grand Master’ of Four-Oh in its early years.

Inge
— one of the women at the platform in Four-Oh.

Jamil
— nurse/nanny to Katerina and Otto’s daughters (in 13th century Russia). Also twin to a time travel agent centuries up the line.

Kaunitz, Stefan
— young student at the Akademie in Neu Berlin, in 2343.

Kempner
— ‘Master’; one of Four-Oh’s Elders.

Kirchoff
— Master in charge of mental health at Four-Oh.

Kollwitz, Ernst
— ‘
Reisende’
or time agent. Otto’s best friend and travelling companion; damaged in the Past.

Kravchuk, Oleg Alekseevitch
— agent of the Mongols in 13th century Russia, and, in some time-lines, married to Katerina.

Kuhn, Matteus
— (aka Matt Caldecott). Sleeper agent for the Germans in California in 1952.

Luwer, Hans
— artefacts expert, based in Four-Oh. Uses his other selves to multi-task.

Maria
— German woman in charge of the platform at Four-Oh; replacement to Zarah.

Nevsky, Alexander Iaroslavich
— Russian Orthodox Prince of Novgorod in the 13th century. Victor of the ‘Battle on the Ice’ (or Lake Peipus) in April 1242, a battle which ended the expansive Northern Crusades.

Odin
— Chief God of the Germanic mythology; ‘father’ of his people.

Old Schnorr
— ‘Master’ at Four-Oh in charge of project to trawl Time for faces; Elder.

Podnayin
— ‘Master’ and
boyar
at Rzhev in 13th century Russia.

Reichenau, Michael
—
Doppelgehirn
, also Supervisor of Werkstatt 9. Somehow involved in time travel. Product of a genetics experiment, he has two skulls ‘hot-wired’ together.

Rieber, Lothar
— aka Aaron; ‘
Reisende
’ or time agent in Baturin in 18th century.

Schultz, Auguste
— Chief Operative of the Investigative Institute in 2343.

Shaposhnikov
— captain of a trading boat in 13th century Russia.

Smith, The
— a smith, also possibly a time agent; from Belyj, in 13th century Russia.

Stahlecker, Dr Walther
— commander of
Einsatzgrupen A
in the 1940s.

Terekhov
— the miller at Cherdiechnost, in 13th century Russia.

Urte
— one of the women at the platform in Four-Oh. Also an expert physicist, technician and mathematician.

Werner
— brother of the Northern Crusades in 13th century Prussia.

Woolf, Paul
— student at the Akademie, Neu Berlin, 2343; son of Chief Geneticist Woolf of the Institute in Vienna.

Yakovlev, Alexander
—
boyar
in the Tver
veche
(or council) in 13th century Russia.

Yastryeb
— see Chkalov, Grand Master of Time for the Russians.

Zarah
— most senior of the women who run Four-Oh’s operating system, the platform. Sweet on Otto.

Running the Risk by Lesley Choyce
[Atlantean's Quest 02] Exodus by Jordan Summers
Paw Prints in the Snow by Sally Grindley
Unworthy Heart: The Donnellys, Book 1 by Dorothy F. Shaw
Always (Time for Love Book 4) by Miranda P. Charles
Spam Nation by Brian Krebs
The Four Million by O. Henry
The One That I Want by R. J. Jones
The Flip Side by Shawn Johnson
Lured From the Path by Lola White
Our partner