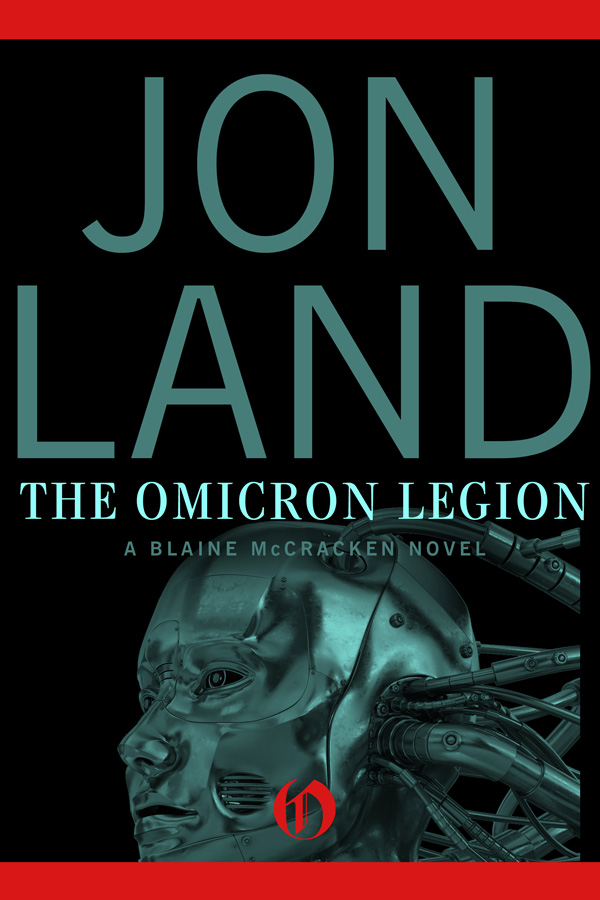 FOR THE GANG AT
NEW ENGLAND HEALTH & RACQUET

Part One: The Heart of Darkness

A Biography of Jon Land

A Sneak Peek at
Strong at the Break

“DO YOU ACCEPT
death?”

Escerbio gazed at the cup of liquid steaming beneath his nose and nodded.

“For those not worthy of manhood, this cup brings the bitterness of death,” continued the tribal Gift Giver. “Do you still wish to taste?”

Escerbio nodded. Across from him, on the other side of the fire, another boy also nodded.

“Then let us hope the gods are with you,” said the Gift Giver. He handed the wooden mug to Escerbio’s friend first.

Escerbio watched Javerrera raise the mug to his lips and gulp down some of the liquid. The boy’s face wrinkled and grew pale. Now the Gift Giver offered the cup to Escerbio. He was an ancient man who had somehow tricked the spirits into letting him see a third century of life. His face was creased and worn, like a battered hide barren of oil. The smell of his breath was rancid and bitter, not unlike the noxious liquid Escerbio now accepted from his hand.

Across the fire, Javerrera’s head was rolling from side to side. His eye sockets had emptied. Escerbio drained the rest of the liquid, and the cup dropped from his hand. He gagged, and it was all he could do to force down the bile that rushed up into his throat. A fire blazed in his stomach. He seemed to have forgotten how to breathe.

Escerbio had always feared the darkness. As a younger boy, he had trembled through many sleepless nights in his hut. But he did not fear this night. He welcomed it because tonight he would become a man. In the Tupi tribe, the fourteenth birthday marked the beginning of manhood, and midnight would bring that blessed time upon him. That moment would see all his boyish fears and uncertainties vanish in the haze of the mysterious ceremony conducted by the tribal Gift Giver.

Escerbio tried to open his eyes, then realized they were already open. The Gift Giver had tossed the wooden mug in the fire, where the flames accepted it with a burst of white that cast a youthful glow upon his ancient face. It looked to Escerbio as if the old man had received the fire into his being. The warmth had spread through Escerbio’s body, and he realized he was trembling, though not from fear. He felt extraordinarily relaxed and full. Deep within him the strange liquid was burning away the last of his boyhood.

The Gift Giver was announcing that the time had come for the spirits to be summoned. They would decide if the boys were worthy. If not, the boys would die.

The Gift Giver was moving in a circle around the boys, his pace becoming more and more frantic. Escerbio grew dizzy trying to watch him. The old man was chanting in the language of the Forgotten Times, calling upon the spirits to rise and make their choice.

Across the fire, Javerrera’s frame had gone totally limp. If not for the darting of his friend’s eyes, Escerbio would have been sure he had failed the test and was dead.

The breeze shifted suddenly, blowing Escerbio’s long hair wildly about his head. The fire surged toward him and he closed his eyes against the certainty that its fierce tongues would singe his flesh. He could smell his own fear and he willed it gone, along with the last of his boyhood.

The Gift Giver was standing behind Javerrera now and chanting. His age-ravaged hands circled about the boy’s head.

Behind the Gift Giver and Javerrera, a figure rose from the shadows of the night. Escerbio could distinguish only its huge outline against the blackness of the trees, but that was enough.

The spirits have heard the Gift Giver and have come!
he thought excitedly.
They have truly come!

The spirit descended on the Gift Giver. Escerbio fought through the blurriness of his vision to watch.

He saw the Gift Giver’s head swallowed by what looked like spade-claw hands.

He saw the old man’s legs dangling in midair as he was hoisted upward.

He heard something rip.

Embers danced from the fire as something dropped into it. Escerbio gazed into the flames.

The Gift Giver’s head gazed back.

Escerbio could see that Javerrera was now in the grip of the spirit.
Stop!
he wanted to scream out.
Stop!
But his breath caught in his throat. He could form no words. He realized Javerrera was screaming. There was a squishing sound and Escerbio was showered by his best friend’s blood. It streamed over him, and in the next instant he was running.

He understood that he had failed both himself and his tribe. He was unworthy because of his fear, and this was his punishment.

Escerbio ran faster. The jungle was a single dark splotch before him. He did not look back. He simply charged through the night, vaguely aware of his flesh being scraped and torn by the tree branches. Whimpering, he stumbled and fell, then dragged himself over the underbrush until he came to a tree. Leaning on it, he regained his feet. Escerbio was sobbing now. The night owned him.

“Help me! Somebody help me!” he screamed as he rushed forward again. He ventured a glance over his shoulder to see if the vengeful spirit was chasing him, but there were only the tangled branches of the thick undergrowth and the blackness of the night. Escerbio hurtled forward.

He saw the spirit too late to turn. He started to scream when the spirit drove its spade-claw into him, shredding his abdomen. Strangely he felt no pain, even when the spirit lifted him upward. Escerbio knew his body was now far off the ground. He could feel his legs twitching in the air. His bowels and bladder drained. He looked into the eyes of the spirit and the darkness that had betrayed him for the last time looked back.

Then there was nothing.

Part One
The Heart of Darkness

BAILEY WAS WAITING
when the limousine slid around the circular drive in front of the large house in Fairfax, Virginia.

“Good evening, ma’am,” he said as he opened its right rear door,

The woman slid out, high heels first, her long legs and hips clad in tight-fitting black pants. “My, you’re a polite one now, aren’t you?”

Bailey squinted at her. “I don’t believe I’ve seen you here before.”

“This one’ll go in the
Guinness Book.
”

“Come this way,” Bailey said, not bothering to hide the reluctance in his voice. He hated these nocturnal binges the general insisted he needed to maintain his sanity. He hated them, but never breathed a word of his contempt to the general. God, he revered the man,
loved
him. After all the general had been through in Nam, and with the tremendous responsibility he bore today, he deserved to indulge whatever idiosyncrasies he might have, no matter what anyone else thought.

Bailey had been there when the general had walked out of the jungle after escaping from a Charlie POW camp. He had served the general as he became one of the most powerful men in the Pentagon. Bailey held the rank of major, but he wore his uniform very infrequently these days, as did the general.

Bailey led the woman through the foyer and up the staircase that circled toward the second floor. She walked behind him, but Bailey was careful to keep her in his peripheral vision. He’d been a Green Beret long before shedding his uniform, and some things stuck.

On the second floor he stopped at the third closed door they came to. “This room leads directly into the study. The door is on the left side.”

The woman winked at him. “Like I told you, I’ve been briefed, lover.”

“I’ll be outside the whole time.”

“When he’s finished with you, you will leave straightaway.”

“Just the way I like it,” the woman said, and disappeared into the room adjoining the study.

Bailey assumed the stance of his silent vigil, regretting he could not move far enough from the study to obliterate the sounds that would soon be emanating from within.

Inside, General Berlin Hardesty sat eagerly in his leather chair, two yards away from a thirty-five-inch television. He heard the woman in the adjoining room and raised the remote control device that lay upon the chair’s arm. He knew the placement of buttons by heart, and went through the proper sequence without even glancing down. The first button turned the room to black, the second lit it a dull gray from the blank picture on the television. A third sent an unseen VCR whirling and brought the screen to life.

The woman was Vietnamese.

General Berlin Hardesty’s fists clenched briefly, then he groped for the pair of small headphones perched upon the other chair arm and fitted them over his ears. The sounds of her moaning filled his ears. Hardesty smiled in anticipation of what was to come.

Seconds later a pair of masked figures strode into the shot. Surprise filled the woman’s face. They dragged her from the bed, where the camera followed them to a chair. The men thrust her naked form into the chair and strapped her arms and legs to it. The woman was still struggling. Her protests filled the general’s ears through his headphones. The camera zoomed in on one of the masked figures whipping forth a knife, then panned to the bulging eyes of the woman who suddenly froze. Her screams must have been too much for the microphone because they dissolved into static at their crescendo.

The general’s thoughts burned with visions of the past, of being tortured by the Vietcong during his six months as a POW. When he had at last escaped and emerged from the jungle, the memories of the pain had proven to be as real as the pain itself. Psychiatrists said he had to put it out of his head, to displace it on to something else. How right they were. The pain of others proved the only way to vanquish his own. And the pain of a Vietnamese—well, that transformed relief into ecstasy.

On the screen, the masked man sliced off the woman’s right nipple. The sounds of her agony drove Hardesty to moan with pleasure. As if on cue, the door from the room adjoining the study opened, and the nude form of the woman emerged. She glided toward him, her path illuminated by the dull haze of the television. She took her position in front of the general and crouched down. The picture’s dull light splotched over her as she slid her fingers over Hardesty’s crotch and found his zipper. His hands were working through her dark hair now. He could not say whether she was Vietnamese or not. Close enough, though.

The Sorcerer's Vengeance: Book 4 of the Sorcerer's Path by Brock Deskins
The Golden Virgin by Henry Williamson
Mystic Hearts by Cait Jarrod
The Other Child by Charlotte Link
The Beast by Jaden Wilkes
Mallawindy by Joy Dettman
TheWaterDragon by Tianna Xander
Secret Lives by Jeff VanderMeer
A Land More Kind Than Home by Wiley Cash
Cold Sweat by J.S. Marlo
Our partner