Read The One Thing Online 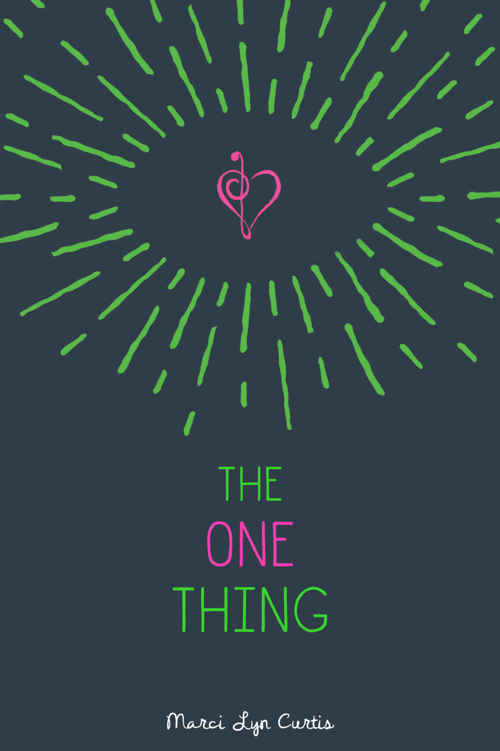 All rights reserved. Published by Hyperion, an imprint of Disney Book Group. No part of this book may be reproduced or transmitted in any form or by any means, electronic or
mechanical, including photocopying, recording, or by any information storage and retrieval system, without written permission from the publisher. For information address Hyperion, 125 West End
Avenue, New York, New York 10023.

For my parents, because they gave me the chance to dream

I
’m not a fan of the bouquet. I have nothing against flowers specifically, but once they’ve been plucked from the ground and clumped
together in a grouping, I find them unnerving. Maybe even a smidge creepy. Nothing says
Please admire my beauty while I die a long, slow death
quite like the floral arrangement. Looking
back, I realize it was probably some sort of omen that Benjamin Milton was standing beside a bouquet when I first met him. After all, I’d been blind for a full six months, and not once during
that time had I encountered a floral arrangement.

Most sighted people are under the assumption that those of us who are completely blind see nothing but blackness. But actually, they are wrong. Those of us who have no vision don’t see
black. We don’t see anything at all. Basically, I see about as much as a fingernail sees: absolutely nothing. No black. No gray. Nothing. So I didn’t have a clue what the bouquet looked
like when I sat down in Mr. Sturgis’s lobby. All I knew was, one, the thing was sitting on the front counter, where I’d plowed into it as I’d checked in, and two, it smelled
suspiciously like minced-up old ladies, so I was guessing there were gardenias in it.

As usual, the lobby had me elbow to elbow with criminals and juvenile delinquents. I waited a good thirty minutes or so before the receptionist—Cari or Staci or something that ended in a
perky little
i
—finally called me up. I’d never actually seen Mr. Sturgis, my probation officer. In my head he was freakishly tall and he sported a stringy ponytail, a pair of
beat-up man-clogs, and a faded peace sign tattoo. But according to my grandfather, he was squat and bald and he had a nasty habit of wearing pants that were about an inch too short. That’s
the thing about being blind: you see people as they really are.

As I walked into his office, Mr. Sturgis said, “Greetings, Miss Margaret.”

“Actually, I prefer Maggie. Remember?” I said as I fumbled my way into my usual seat, folding up my cane and stuffing it in my purse. My full name, Margaret, is the sort of name
you’d expect from someone who is three hundred years old. Or in line for the British throne.

“So. Margaret,” he went on as I bounced my foot in time to a Loose Cannons song that had been stuck in my head all day. I could hear him shuffling papers around. “Miss Olive
tells me that you are finished with your mandatory community service. In her words, she says”—he cleared his throat—“‘Margaret is a witty young woman who is highly
skilled at looking busy while doing absolutely nothing.’”

A long silence ensued. Presumably he was waiting for me to comment, but I said nothing. Instead, I brushed a little imaginary lint off my shorts, which was ridiculous, because even if I
had
lint on my shorts, I wouldn’t be able to see it.

After a few moments, he went on to say, “How’s school?”

“Spectacular,” I said. The last day of my junior year was yesterday. So, yes, school was going spectacularly today. I’d slept until noon, feasted on a sleeve of Girl Scout
cookies, taken a three-hour shower, and slothed my way to the probation office.

“Care to elaborate about your grades?” Mr. Sturgis said, his pen scratching on his papers.

“What’s your current GPA?” he asked, chuckling. He and I had come to an unspoken agreement a couple months ago: I would be magnificently sarcastic, and he’d think it was
amusing. Besides, I’d found it was best to keep my verbiage to a minimum when dealing with Mr. Sturgis. If I opened a conversational door, he’d bomb right through it and lecture me to
unconsciousness about contributing to society and correcting my karma and whatever.

It would have been two-point-four-ish if it weren’t for my English teacher, who’d hated me ever since I’d caused a little incident in his class several months back. In my
defense, I’d been miserable with my abrupt transfer to Merchant’s School for the Blind. Partly because I hadn’t wanted to leave South Hampton High, and partly because
Merchant’s was a complete crock. Merchant’s was coddling me, patting me on the back, telling me everything was going to be okay. But everything wasn’t okay. Out in the real world?
I was tripping over curbs I didn’t know existed, and I was finding it impossible to tell the difference between a ten-dollar bill and a twenty-dollar bill. I was coming to the realization
that I would never kick another soccer goal.

So basically, Merchant’s blew. And perhaps the worst thing about the place was my English teacher, Mr. Huff. His breath smelled like the inside of a belly button and he spoke
one—word—at—a—time—like—we—were—all—incredibly—slow. A dozen years earlier, he’d had a bout of testicular cancer. So every day in
class, he droned on and on about how he was a cancer survivor, and how he could relate to living with adversity, and how he’d overcome obstacles. And I would huff out these monstrous sighs
and roll my eyes, hoping he’d get my point.

And then one day, in the middle of one of my huffing-and-eye-rolling displays, he surprised me by saying, “Maggie? Is there something you would like to share?”

Now, I couldn’t be blamed for what happened next. I was simply answering his question honestly. Besides, I could’ve said a lot worse. I was thinking a lot worse. “Actually, I
can’t seem to grasp the correlation between your nutsack and our eyesight,” I informed him, swooping my arm around the classroom to include all the other poor, sightless bastards who
had been stuck listening to him day after stinking day.

Naturally, my answer earned me a seat in the principal’s office, where I proceeded to tell the principal what I thought of Mr. Huff’s nutsack. Next thing I knew, I was spending my
afternoons in detention, and Mr. Huff was speaking to me in a pinched voice and handing me an unwarranted amount of crappy grades.

Mr. Sturgis jerked me back to the present. “How’s your mother?” he asked.

My head snapped up. “Why? Did she call you?”

“I haven’t heard from her. Are you in trouble at home?”

He gave me a probation-officer sigh—slightly suspicious, slightly entertained, slightly annoyed—and then he said, “I’ll see you next month. And Margaret? You’re a
good kid. Keep your nose clean.”

“Finally,” I said, popping up and striding toward the door, not bothering to use the cane I’d tucked into my purse. I discovered almost immediately that some genius had dropped
an unspecified, fantastically slick substance on the tile floor and had neglected to clean it up. Naturally, I stepped right in it.

I’d like to say that I fell with the dignity and grace of a self-respecting blind girl—the sort of girl who understands and accepts that, yes, there are hidden dangers out there, and
yes, she will probably get a little banged up every now and then. But I didn’t. And the four-letter word that came out of my mouth as I hit the floor was extremely loud and so thick that it
could’ve been heated up and drizzled over pancakes.

So my eyes were squeezed shut, and I was lying on my side with the reek of that bouquet all around me, clutching my skull as though it would surely fall apart all over the lobby if I let it go,
when I heard a kid’s voice say, “That was the most majestic fall I’ve ever seen.”

Gosh, thanks
was what I wanted to say to him. But I’d whacked my head on something hard-cornered and it wasn’t functioning properly. I couldn’t get any words to
transit to my mouth. They slid around in my brain, unable to find the exit.

“Are you okay?” he asked. He didn’t sound concerned.

“I’m just dandy,” I managed after a moment and with some difficulty, sounding more slurred than sarcastic.

The left side of my head was ringing. I stuck a finger into my ear canal and wiggled it around. It didn’t help. With a groan, I rolled onto my back.

“Need a hand getting up?” he said.