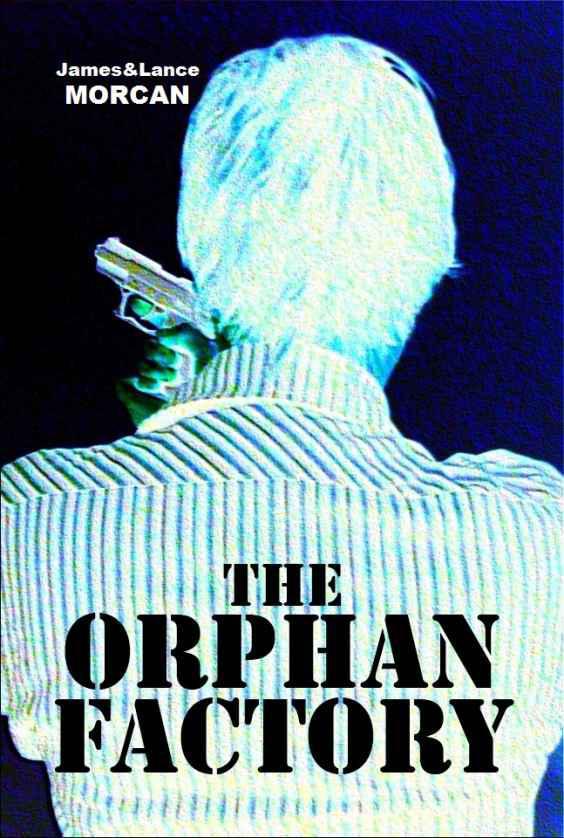 Book Two in The Orphan Trilogy

(Prequel to The Ninth Orphan)

All rights reserved. No part of this book may be reproduced or transmitted in any form or by any means, electronic or mechanical, including photocopying, recording or by any information storage and retrieval system, without written permission by the author, except for the inclusion of brief quotations in a review.

In this work of fiction, the characters, places and events are either the product of the authors’ imaginations or they are used entirely fictitiously.

“A boy comes to me with a spark of interest.

I feed the spark and it becomes a flame.

I feed the flame and it becomes a fire.

I feed the fire and it becomes a roaring blaze.”

“Now, we can see a new world

A world in which there is

the very real prospect of a

An old vagrant hummed tunelessly to himself as he warmed his bony hands over a fire he’d lit minutes earlier in a drum long since blackened by perhaps a hundred such fires. Certainly more fires than he, or any of his street cronies, could remember. He stopped humming when, across a busy thoroughfare, a gravel-voiced busker began reciting poetry.

“Stormy, husky, brawling,” the busker rumbled. “City of the big shoulders.” He was reciting verse from the works of hometown poet-made-good, Carl Sandburg. The poem was appropriately titled
Chicago
. “Come and show me another city with lifted head singing so proud to be alive and coarse and strong and cunning.” The busker, a long-haired Vietnam veteran whose only concession to his military past was his VSM service medal which he still wore with pride, looked directly at the old vagrant opposite.

The vagrant imagined the busker smiled at him, though he couldn’t be sure in the fading early evening light. Even so, he flashed a toothless grin in the other’s direction.

Soon, the old man was joined by half a dozen street pals. All homeless like him, they appeared like disheveled ghosts out of the shadows, attracted partly by the warmth of the fire and partly by the busker. They listened intently to the poet’s words that flowed effortlessly from the busker’s mouth. Words that painted images so vivid in their minds it was as if the men were watching a kaleidoscope of their own youth.

“Under the smoke, dust all over his mouth, laughing with white teeth,” the busker continued. “Under the terrible burden of destiny laughing as a young man laughs.”

Several passersby paused to listen, but none bothered to drop a donation into the hat that lay at the busker’s feet. Finally, as the busker finished his recital, a business executive threw a quarter into the hat without breaking stride. Encouraged, the busker launched into another Sandberg poem.

Listening to the busker delivering further verses about his beloved Windy City, the old vagrant couldn’t help but note the irony: there wasn’t a breath of wind on this still Chicago evening.

The vagrant’s parents had always assured him the city’s misleading nickname had nothing to do with the weather. His mother had insisted the
Windy City
label came from the longwinded speeches given by the city’s Nineteenth Century politicians, while his father claimed the moniker had been mischievously bestowed by competitive New Yorkers in their attempt to win the World Trade Fair of 1893.

To add to the contradictions, even though it was February, it was an unusually mild winter’s evening. The vagrants gathered around the fire warming their hands did so more out of habit than necessity on this occasion.

Chicago’s streets were busy and the mood downtown was fairly upbeat. President Jimmy Carter was due to visit the city and greater Illinois the following day. Word had spread: the President would be here soon, and come hell or high water he was going to receive a right, royal Illinois welcome.

As Chicagoans went about their business, hurrying home after a long day at the office or heading out to sample the city’s nightlife, none were remotely aware of the sinister, Nazi-like experiment taking place virtually under their noses.

Despite the experiment’s seventy five million dollar price tag, only a select few knew about it. Those in the know did not include the city’s Mayor or any state politicians; at Federal level, not even the President knew about it.

The experiment was taking place in a laboratory in the concealed basement of a renovated warehouse just off North Michigan Avenue. Seven pregnant women were in various stages of labor in the lab that served as a makeshift maternity hospital.

Like some Orwellian nightmare, the women were giving birth in clockwork-like fashion, almost in unison.

The numerous personnel in attendance were all in the employ of the Omega Agency, a recently formed and highly secretive outfit which would one day become the world’s most powerful shadow organization.

Supervising the eerie experiment was Omega’s own Doctor Frankenstein – better known as Doctor Pedemont, the brilliant biomedical scientist responsible for the radical science behind it. Over the past few years, with the help of his team of geneticists, Doctor Pedemont had painstakingly selected the fetus’ genes from thousands of sperm donations combined with the genes of his female subjects. The donations had come from another medical experiment referred to as the
Genius Sperm Bank.

The motivation behind the Genius Sperm Bank, which had been initiated over a decade earlier, was to advance the breeding of super-intelligent people. The bank was stocked full of semen donations solicited from many of the world’s most intelligent men.

Benefiting from the efforts of some of Omega’s elite operatives, Doctor Pedemont had unlawfully obtained hundreds of samples from the Genius Sperm Bank. Then, taking the best of
the sperm donations, he’d artificially inseminated the very women who were now in the process of giving birth. This meant each child that was about to be born effectively had one mother and numerous fathers.

The legalities of the entire operation were of no concern to Omega. Although still in its formative stages, the agency was already above the law.

A tense Doctor Pedemont and three geneticists fussed over the first mother-to-be, a young redheaded woman, as she entered the final stages of labor. The two suits observing from afar waited anxiously as the geneticists used advanced scientific equipment to monitor the birth.

One of the geneticists recorded the doctor’s findings in a file labeled
Number Five
. Sadly, this would be the closest the girl would ever have to a real name.

Doctor Pedemont gave the baby to another geneticist then grabbed her newborn sister and weighed her. “Number Six. Born 7.49 pm. Weight seven pounds, one ounce.”

The advent of twins was no accident, of course. Their arrival had been planned for, like everything else that occurred within the Omega Agency.

The next baby was born minutes later to an African-American woman. It was a boy who was clearly of African descent. However, he had a much lighter skin tone than his mother, indicating most or all of the sperm donations inseminated into the woman were taken from Caucasian men.

Because Number Seven was a premature birth, one of the geneticists immediately placed him in an incubator. Number Eight, who was born quarter of an hour later, was a healthy girl of Oriental descent.

When Number Nine was born, the mother, a beautiful dark-haired woman with striking green eyes, reached out to Doctor Pedemont to indicate she wished to hold the boy she had just birthed. The doctor looked around enquiringly at the two mysterious suits who remained in the corner. After discussing it between themselves, the older of the two nodded.

Annette nodded forlornly. She fully understood the ramifications of her agreement with the Omega Agency. Doctor Pedemont reluctantly placed Number Nine in Annette’s arms. The baby boy reached out and placed his tiny hand on the ruby that hung from a silver necklace she wore.

“Sebastian,” Annette whispered tearfully as she looked into her son’s eyes. “I name you Sebastian, after my father.”

Anxious to avoid further bonding between mother and son, Doctor Pedemont took Number Nine from Annette and handed him to one of the geneticists who, without ceremony, jabbed a needle into the boy. Predictably, Nine started screaming. His mother looked on resignedly.

Later that night, two more boys and another girl were born. Like Number Nine, all three were Caucasian.

As Number Twelve, the last of the newborns, was weighed, the two suits approached a relieved Doctor Pedemont. They looked more relaxed now. The older of the two, a short, stocky, dapper individual with heavily pock-marked skin, reached for the doctor’s hand and shook it firmly. This was Andrew Naylor, the Omega Agency’s hard-nosed director who was known for his foul temper as well as for his lazy eye, which never quite managed to focus on whomever he was addressing at the time.

“Congratulations, doctor,” Naylor mumbled without even a hint of a smile.

Naylor’s companion, Special Agent Tommy Kentbridge, patted the doctor on the back in congratulatory fashion. “Well done,” Kentbridge said. Tall and ruggedly handsome – physically the polar opposite of Naylor – the special agent was one of Omega’s young stars. As a field operative, he had the sort of record most agents twice his age would be proud of. Although only in his early twenties, Kentbridge had been assigned to manage the products of this agency experiment. Like it or not, he would be the nearest to a father any of them would have.

It was a long-term experiment and no-one knew exactly what the outcome would be. The experiment was known in Omega circles as
The Pedemont Project
…

The inauspicious neighborhood of Riverdale, on Chicago’s far south side, was like a ghost town as dawn broke. Refuse littered the neglected streets and messy front yards of the houses that lined those same streets.

Lawns, letterboxes and roofs were coated in a heavy frost and there was a chill in the air on this bleak winter’s day in January, 1992.

A mangy, stray cat chased after a torn page from a newspaper as it drifted by in the light breeze that blew off the nearby Little Calumet River. The feline paused when her acute hearing picked up the faint sound of constant pounding, ears twitching in the direction of the sound as the pounding intensified. She crouched and hissed aggressively as a large group of joggers came into view.

The joggers were children, ranging in age from ten to twelve. They were led by a tall, fit-looking man. He wore a black tracksuit with white cross-trainers. All twenty three children wore tracksuit tops, shorts and running shoes. Their breath was visible in the cold, the condensation hanging in the air like a mist, and they moved like athletes, covering the ground in the efficient gait of distance runners.

Throb (Club Grit) by Jaxsen, Brooke
Special Assignments by Boris Akunin
Demigod Down by Kim Schubert
WanttoGoPrivate by M.A. Ellis
The Gallows' Bounty (West of Second Chances) by Desiree Banks
Kiss by Wilson, Jacqueline
First Time with the Fraternity by Laurel Adams
Mission: Compromised Submissive by Willow Brooke
The Red Judge by Pauline Fisk
Take the All-Mart! by J. I. Greco
Our partner