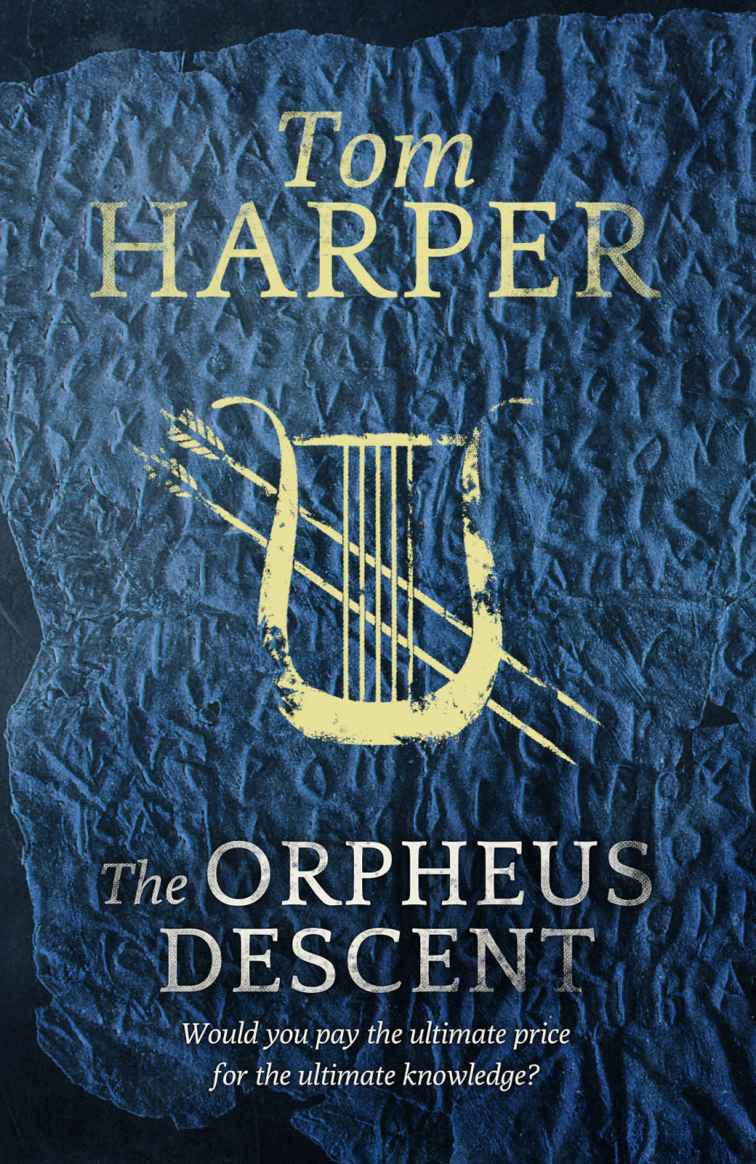 The Book of Secrets

Secrets of the Dead

The Mosaic of Shadows

Knights of the Cross

The right of Tom Harper to be identified as the Author of the Work has been asserted by him in accordance with the Copyright, Designs and Patents Act 1988.

The Orphic Hymn to Gaia: translation by and copyright © Virginia Stewart-Avalon. Used with permission.

For Matthew
Beauty and Truth

No one in his right mind would try to express his deepest thoughts in words – let alone put them down in writing.

There’s a cave. There are men inside it, collared and chained so that they can’t move, can’t even turn their heads. There’s a fire behind them – which they can’t see – and puppets dancing in front of the fire. All the prisoners see is shadows thrown on the cave wall.

They’ve been in that position their whole lives. They think the shadows are reality. How could they know any different?

What happens if one of them escapes?

I don’t have to imagine the cave: I’m already in it. There’s no fire and no sun. The only shadows here are projections from my own mind.

The hard floor bruises my bones; a knot in the rock digs into my skull. But the pain fades eventually. The stone swallows me, the warmth of my body melting me into it.

Poets rhapsodise about the silence of the grave. Now that I’m here, I have to conclude they’re beautifully misinformed. It isn’t silent. Water drips like a heartbeat. The hiss of stone rushes through my ears, the melody of the earth turning on its axis.

The darkness gives me strange sight. I can’t see my hand in front of my face, but I can peer over the rim of the world and see all space combined. I can dip in my hand and scoop up bubbles of time, twisting them this way and that to see how they catch the light.

In a glistening bowl, I see the gilded city, its temples proud on the high rock of the acropolis. In the harbour beyond the walls, there’s a wooden ship with bright red eyes, and an iron ship whose eyes are rusted shut. The iron ship has no sails. It’s the ship of the dead.

I can hear the silence and see through darkness. I’m awake and dreaming. I’m dead, and more alive than I’ve ever been.

In the dry air, I catch the impossible smell of ripe figs. The goddess must be near.

I went down to the Piraeus. It’s so clear, it could have been yesterday.

Under no circumstances should anyone under forty ever be allowed to travel abroad.

I went down to the Piraeus yesterday with Glaucon, my brother. I told him not to waste his time, but he insisted.

Flutes piped me away at dawn. The best parties were just letting out: musicians played a last song, while tired guests dressed and dragged themselves into the streets. Rain licked the air; a dark cloud brooded motionless over the greatest city on earth.

At the eastern gate, I paused for one last look. Civic Athens had already turned her back on me: the agora, the law courts, the Assembly houses and gaols were all hidden behind the shoulders of the acropolis. Only the Parthenon remained, hovering above the city: a marble phantom among the clouds.

For a second, delicious melancholy drowned out my worries. I whispered a silent prayer and tried to swallow the moment whole, to carry it with me on my journey.

I turned away. In front of me, a two-foot god with a three-foot erection leered out at me from the gate. Glaucon spat on his hand and touched the herm’s well-worn cock for luck.

‘At least he’s pleased to see you go.’

I frowned, cross that he’d spoiled the moment with a cheap joke. Glaucon’s face fell, wounded that I’d taken offence. A space opened between us.

Beyond the gate, the road to Piraeus is a long straight corridor between the walls, a no-man’s-land of graffiti, allotments and tombs. Walking there reminds me of a prison yard, especially on the days when the executioners are at work outside the north wall, and the screams of condemned men follow you all the way down to the sea. That early, the executioners were still in bed; the road was almost empty. Our few fellow-travellers merely showed as shadows in the distance.

It was a lonely walk, but if there were bag-cutters and cloak-snatchers skulking among the tombs, they left us alone. The Aristids have always been big men. Even at our ages, just touching either side of forty, you could still see shades of the war hero in Glaucon, the wrestler in me. Pollux and Castor, Socrates used to call us: the divine brothers, boxer and horseman. His star pupils.

A muscle tightened across my chest, as it always does when I think of him. Ten years on, his absurd death still takes my breath away. Athens has been empty since – I should have left years ago. All it wanted was courage.

Glaucon looked at the sky. ‘Could be a storm coming. Not a good day for going to sea.’

I walked faster. I’ve dreamed the same dream three nights running: drowning, sucked down into a void from which even my screams can’t escape.

I don’t want to go on this voyage.

Athenians have never been easy with the world. We’re exceptional people, only comfortable with each other. Even our fitful attempts at empire feel solipsistic, an attempt to engage the world by making it more like us. The rest of the time, we keep it at arm’s length.

And the end of that arm is the Piraeus, the Athenian hand that holds back the world, or extends – tentatively – to greet it. Every nation is here: dark-skinned Carthaginians jabbering in their quickfire tongue; crafty Sicilians who smell of cheese; Black Sea colonists like bears, and Egyptians who can give you the look of eternity even while haggling three coppers off a bale of cloth. Hens peck at the corn that the grain wagons have spilled lumbering up to Athens, while two-obol whores try to distract men from their work. A few tried to proposition me and Glaucon. Even at my age, I found myself blushing, not knowing where to look.

‘Perhaps it would settle your nerves,’ Glaucon suggested. ‘You look seasick already.’

I couldn’t deny it. Through all the imported scents in the air, I could taste the bitter note of the sea. It turned my stomach. I wished, again, that I could abandon this trip.

My hand moved to my waist, touching the bag where I kept Agathon’s letter. I had to go.

We carried on, past the Emporium and the shrine of the Thracian goddess Bendis. Burnt-out sticks littered the street from the torchlit procession the night before; street sweepers swiped brushes at the crushed garlands and broken pots left behind from her festival.

And then there was the harbour.

I suppose everyone looks at the sea and finds a mirror of his own possibilities. A merchant sees profit; an admiral, glory; a hero, adventure. To me, it was a black mouth, unfathomable and vast. Ships clustered around the basin like teeth; yellow foam and effluent flecked the pilings like spit. Worst of all was the water. Its trackless waves opened in front of me and sucked me into my nightmare. The ground swelled beneath me. Sweat beaded on my face.

Glaucon caught my arm. ‘Are you ill?’

I waved him off and forced my attention away from the water. Behind the stoa, I noticed the widow’s-peak roof of Aphrodite’s temple.

‘I thought perhaps I should say a prayer to the goddess before I go.’

He didn’t believe me. ‘Wasn’t going to Delphi enough? And what about the ram we sacrificed to Poseidon yesterday?’

I hadn’t forgotten it. The beast nodding while I sprinkled water over his head; the sickly gleam of the priest’s knife; the blood gushing into the basin and the entrails quivering like a heap of eels.

‘The priest said the omens were good,’ Glaucon reminded me.
His mouth twitched as he said it.
‘If you don’t like the auguries, perhaps you should stay.’

I risked another glance at the harbour. The vision had passed: all I saw was boats.

We found my ship moored up at the Sicilian docks on the east side of the basin, the busiest part of the harbour. She watched me approach, two red eyes painted on her prow just above the waterline, while slaves fed jars of olive oil into her belly. An unattended pile of baggage sat on the wharf by the gangplank.

Glaucon sized up the bags, which a wagon had brought down yesterday. ‘Are those all yours?’

‘You won’t see much of Italy if you’ve got your head rolled up in a scroll.’

I didn’t try to explain. Glaucon loves learning, but he’d never miss a meal for it.

‘You never saw Socrates with a book,’ Glaucon persisted.

‘He wouldn’t have left the city.’ There was a point to this, and Glaucon meant to get there. ‘He never left, except on military service. Athens was everything to him.’

Night and Day by White, Ken
Peace Kills by P. J. O'Rourke
The Princess in the Opal Mask by Jenny Lundquist
Tratado de ateología by Michel Onfray
Hello, Darkness by Sandra Brown
Atlantis: Three Tales by Samuel R. Delany
The Heat by Heather Killough-Walden
Black Glass by Mundell, Meg;
The Spark of a Feudling by Wendy Knight
Fifty Shades of Chicken: A Parody in a Cookbook by Fowler, F.L.
Our partner