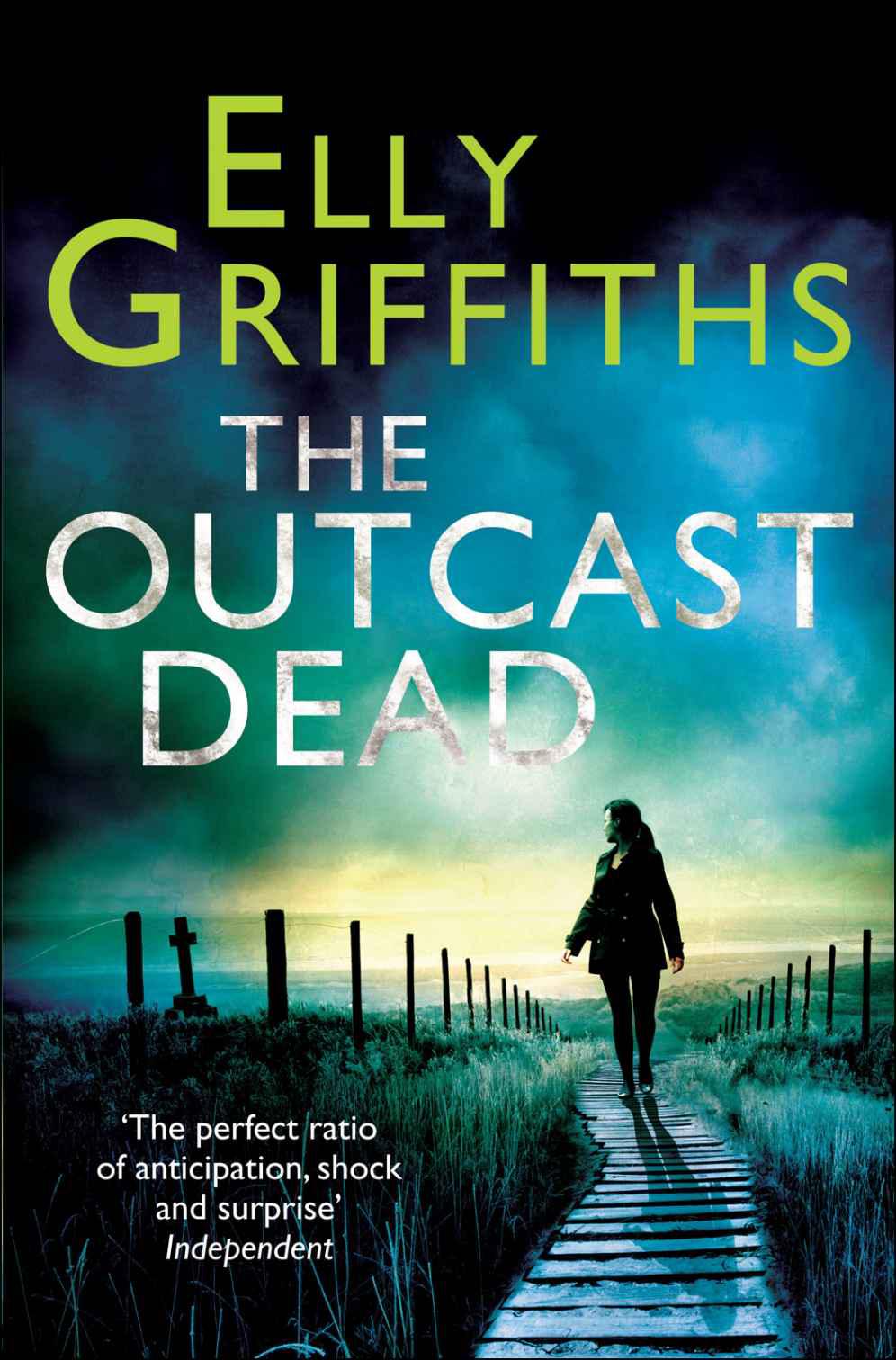 First published in Great Britain in 2014 by

The moral right of Elly Griffiths to be identified as the author of this work has been asserted in accordance with the Copyright, Designs and Patents Act, 1988.

For my children, Alex and Juliet

‘And we ask your abundant blessing, Lord, on these, the outcast dead …’

There is a murmured response from the group gathered on the bank below the castle walls. But Ruth Galloway, standing at the back, says nothing. She is wearing the expression of polite neutrality she assumes whenever God is mentioned. This mask has stood her in good stead over the years and she sees no reason to drop it now. But she approves of the Prayers for the Outcast Dead. This brief ecumenical service is held every year for the unknown dead of Norwich: the bodies thrown into unmarked graves, the paupers, the plague victims, forgotten, unmourned, except by this motley collection of archaeologists, historians and sundry hangers-on.

‘Lord, you told us that not a sparrow falls without our Father in Heaven knowing. We know that these people were known to you and loved by you …’

The vicar has a reedy hesitant voice which gets lost before it reaches Ruth. Now she can only hear Ted, one
of the field archaeologists, giving the responses in a booming baritone.

‘We will remember them.’

She doesn’t know if Ted has any religious beliefs. All she knows about him is that he was brought up in Bolton and may or may not be Irish. If he’s Irish he’s probably a Catholic, like DCI Harry Nelson who, however hard he denies it, has a residual belief in heaven, hell and all points in between. Thinking of Nelson makes Ruth uncomfortable. She moves away, further up the hill, and one of the people gathered around the vicar, a tall woman in a red jacket, turns and smiles at her. Ruth smiles back. Janet Meadows, local historian and expert on the unnamed dead. Ruth first encountered Janet over a year ago when examining the bones of a medieval bishop believed to have miraculous powers. It was Cathbad who put Ruth in touch with Janet and, even now, Ruth can’t believe that her druid friend won’t suddenly appear in the shadow of the castle, purple cloak fluttering, sixth sense on red alert. But Cathbad is miles away and magical powers have their limitations, as she knows only too well.

Words float towards Ruth, borne on the light summer breeze.

So many words, thinks Ruth – as she has thought many times before – to say so little. The dead are dead and no words, however resonant, can bring them back. Ruth is a forensic archaeologist and she is well acquainted with
the dead. She believes in remembering them, in treating their bones with respect, but she doesn’t expect ever to see them again, carried heavenwards on clouds of glory. Unconsciously, she looks upwards at the pale blue evening sky. It’s June, nearly the longest day.

A loud ‘Amen’ from Ted signals that the service is at an end and Ruth walks towards the knot of people sitting or standing on seats cut into the grassy bank. She approaches Ted but sees that he’s talking to Trace Richards, another of the field archaeology team. Trace’s aggressively alternative appearance – purple hair, piercings – belies the fact that she’s from a very wealthy family and has, in fact, just got engaged to a prominent local businessman. Ruth has never really got on with Trace so she veers off at the last minute and finds herself next to Janet.

‘I like this service,’ says Janet. ‘We
should
remember them, the ordinary people. Not just the kings and the bishops and the people rich enough to build castles.’

‘It’s one of the reasons I became an archaeologist,’ says Ruth. ‘To find out about how ordinary people lived their lives.’ She thinks of Erik, her ex-tutor and mentor, saying, ‘We are their recorders. We set down their daily lives, their everyday deeds, their hopes and dreams, for all eternity.’ But Erik is dead now and his hopes and dreams are forgotten, except by those people, like Ruth, whose lives he has marked for ever.

‘You’ve been digging at the castle haven’t you?’ says Janet.

‘Yes,’ says Ruth. ‘Right near here, by the entrance to the cafe.’

‘We think we’ve found the bodies of some prisoners who were executed.’

‘How do you know they were prisoners?’

‘Well, they don’t seem to have been buried with much ceremony, no shrouds or coffins. Some have their hands still bound. And the bodies were lying prone, face down, north to south.’

‘Christian burials are usually west to east, head to the west, feet to the east.’

Janet nods thoughtfully. ‘They really were outside Christian charity, weren’t they? They might not even have committed very dreadful crimes either. In the early nineteenth century you could be hanged for being a pickpocket.’

‘I know,’ says Ruth. She doesn’t mention one particular skeleton, excavated yesterday, which she believes may be that of a woman who was guilty of a far more terrible crime.

‘Can you date the bodies?’ asks Janet.

‘We can do Carbon 14 tests on the bones,’ says Ruth. ‘Look at any objects found in the grave, that sort of thing. And we know that convicted felons were mainly buried in the castle precincts in the mid to late nineteenth century. Before that they were sent to the surgeons for experimentation. It was actually a crime to bury them. And
before that, of course, they were tarred and put in metal cages.’

‘Yes. Apparently, you could see human remains hanging in gibbets right up to Victorian times.’

‘There’s a Gibbet Street in the city,’ says Janet. ‘And Heigham Street used to be known as Hangman’s Lane. Executions were big events in Norwich,’ she continues, her voice dry. ‘They were held here on Castle Hill. Sometimes there would be a fair or a market too, just to add to the merriment, then the bell of St Peter Mancroft Church would ring and the prisoner would be led out, following the chaplain and the prison governor.’

Janet, like all good historians, always makes Ruth think that she can actually see the past. She looks up at the castle, square and dark against the sky. She can almost hear the prayers of the chaplain, like the words of the vicar earlier, lost upon the air. Then the great bell tolling, the jeers of the crowd, the white face of the prisoner before the hood is pulled over his head.

‘It must have been ghastly,’ she says.

‘Ghastly?’ says a voice behind her. ‘What’s ghastly?’ Ruth turns and sees her Head of Department, Phil Trent, apparently dressed for cricket in white trousers, open-necked shirt and a panama hat.

Phil doesn’t pursue the matter. He rarely seems interested in what Ruth has to say although she is fairly popular with him at the moment because she has just
got a publishing deal for her first book. The book, about an excavation in Lancashire, has nothing to do with Phil or the department but, nevertheless, he is taking a good percentage of the credit. Even so, he never usually shows any enthusiasm for her company but today he is positively brimming with bonhomie, seizing her arm and steering her away from Janet. Ruth looks back apologetically and Janet gives her a smile and an odd little wave.

Ruth composes her face. The news could be promotion for Phil or new funding for the department. She doubts if it is anything to do with her. It could even be personal. Phil lives with Ruth’s friend Shona and they have recently had a baby. Maybe they’re getting married?

‘You know our find earlier,’ he says, lowering his voice.

‘Our’ is pushing it, Phil wasn’t even on site when Ruth uncovered the woman’s body, though he came quickly enough when he heard the news.

‘Well, there’s been some interest,’ he says.

‘From English Heritage?’ asks Ruth, genuinely excited. If English Heritage fund a really big dig, who knows what they could find? Norwich Castle dates back to medieval times, there must be layers and layers of treasures beneath their feet.

‘Better than that,’ says Phil his face holy with joy. ‘
Television
.’

Ruth drives home through apparently endless traffic. She has left the other archaeologists having a party in
the castle grounds, with warm white wine and vegetarian snacks supplied by Janet. This is one of the worst things about being a working mother. Oh, the
work’s
all right. You can make arrangements for the work. It’s all the other stuff. The drinks after work, the leaving dos, the Friday nights when someone suggests a curry. All the times, in fact, when the important bonding gets done. Ruth has to miss all that, and she’s lost count of the times when she’s been the last to hear about a dig because ‘we discussed it last night in the pub’. Phil is a great one for networking, he’s always skulking off with a few cronies to plot over pasta but, then again, Phil is only a working father. Having children doesn’t seem to impinge on his professional life at all.

Madly & the Jackal by M. Leighton
Time Off for Murder by Zelda Popkin
Strength to Say No by Kalindi, Rekha; Ennaimi, Mouhssine
Redemption (Cavan Gang #2) by Laylah Roberts
Our Song by Casey Peeler
The Spy Who Painted the Queen by Phil Tomaselli
Find Me (Truthful Lies Trilogy - Book Two) by Rachel Dunning
Deep Water by West, Sinden
Dead Reckoning by Patricia Hall
The Two Timers by Bob Shaw
Our partner