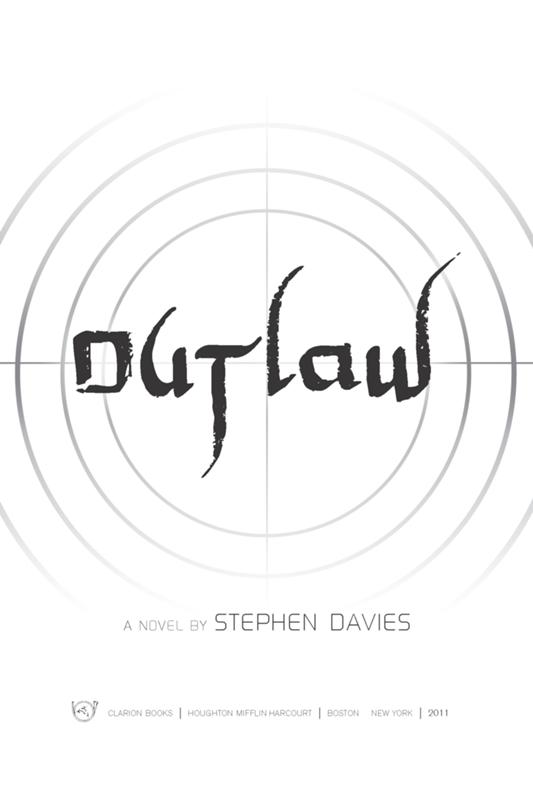 The text was set in Fournier
MT
.
Book design by Sharismar Rodriguez

Summary: The children of Britain's ambassador to Burkina Faso,
fifteen-year-old Jake, who loves technology and adventure, and thirteen-year-old Kas,
a budding social activist, are abducted and spend time in the Sahara desert with
Yakuuba Sor, who some call a terrorist but others consider a modern-day Robin Hood.
ISBN 978-0-547-39017-8
[1. KidnappingâFiction. 2. SurvivalâFiction. 3. Brothers and sistersâFiction. 4. Social
problemsâFiction. 5. TerrorismâFiction. 6. Burkina FasoâFiction. 7. SaharaâFiction.]
I. Title.
PZ7.D2845Out 2011 [Fic]âdc22
2011009643
Manufactured in the United State of America
QFF 10 9 8 7 6 5 4 3 2 1
4500322704

This book is dedicated to Norbert Zongo (1949â1998),
who had the courage to take a stand against corruption
and paid for it with his life.
en.wikipedia.org/wiki/Norbert_Zongo

Burkina Faso, West Africa, has been my home since 2001. Many thanks to my friends and neighbors there for sharing with me their lives, their proverbs, and their wonderful stories.

Jake
Knight ran along the deserted towpath past Armley Mills and the industrial museum. It was two o'clock in the morning, and he was so far out of bounds it was not even funny. Of all the nocturnal quests that he had been on, tonight's was the farthest from school. As for the clue, it was more cryptic than ever before:
Idle persons shuffled here.
Jake turned the phrase over and over in his mind, trying to tease some meaning from it.

A glimmer of moonlight reflected off the canal. Three smackheads loitered under the railway bridge ahead, kicking a
DID YOU WITNESS THIS CRIME?
placard between them. Jake's heart pounded as he approached the men. His black sweater and black tracksuit bottoms were hardly conspicuous, but silence was just as important as camouflage.
Keep fast,
he breathed,
and light on your toes.

The loiterers did not see Jake until he was among them, and no sooner had they registered his presence than he was gone again, under the railway bridge and up the side of the embankment, clawing his way through thick undergrowth and stinging nettles, breathing the sweet, cloying smells of wet vegetation and festering litter. There was some angry shouting from the towpath below him, and a brief, fumbling attempt at pursuit.

Jake vaulted a wooden fence, crossed the railway line, and scrambled through a hedge into a housing development. How many miles had he run? Four? Five? He sprinted southeast between brooding tower blocks and came out onto Hall Lane. The boarded-up windows of Mike's Carpets, Pet World, and Armley Bingo Hall glared at him as he passed.
Not far now.

Jake put his hands on his knees and gasped for breath. Then he straightened up and looked around. To his left was a high brick wall. To his right was a cemetery with tombstones leaning crazily in the moonlight. Jake shivered and checked his latitude. He was a fraction too far south, which meant that the thing he sought was not in the cemetery.

A loud voice in his left ear made him jump. "You are now standing at Leeds Prison, formerly known as Armley Jail. Leeds is a Category B prison, which once incarcerated the murderous cat burglar Charles Peace."

Jake took the earphone out of his left ear and slipped it into the money belt underneath his sweater. He had forgotten that HearPlanet was still runningâit was a useful app, but annoying when it made you jump out of your skin.

So this was Leeds Prison, was it? He had seen it from the front, with its gleaming gates and slick visitors' center, but never from the back. Here an imposing brick wall stood fully fourteen feet high, topped with coils of barbed wire. Beyond the wire loomed the jagged crenellations of the jail itself, a Gothic horror against an inky sky.

Idle persons shuffled here.
Jake groaned. It was an anagram! Shuffle the letters
IDLE PERSONS
and you got
LEEDS PRISON
. Griff must have lobbed the thimble over this very wall into the exercise yard beyond.

Jake and his mates in the dormitory had invented geothimble just a few weeks before, but it was fast becoming a craze, spreading to other houses and even other years. It was basically a high-tech version of the old-fashioned kids' game hunt the thimble. Boys took turns borrowing an item from someone elseâa shoe, a chocolate bar, a penknife, whateverâand hiding it in a remote location. If the owner wanted his "thimble" back, he would have to get it himself, aided only by a GPS reference and a cryptic clue. Tonight's thimble, the object of Jake's quest, was a cardboard folder containing his geography project, which was due to be handed in the next day.

Thimbling a prison was cunning, just like Griff, but it was within the rules. Only last week Jake had slid Griff's watch into a mailbox on the other side of town, forcing Griff to wait until the early-morning collection and plead with a mailman. If this was Griff's revenge, so be it. Jake knew he would have to go for it. He had no intention of getting a failing grade this time.

Jake exited map mode and switched on his phone's flashlight to examine the barbed wire along the parapet. At one point there seemed to be a small gap between the bricks and the wire. With a bit of pushing and wriggling, perhaps he could get through. As for the fourteen-foot-high brick wallâwell, that was also doable. He had something of a reputation among the thimblers.

Jake Knight's a legend. He can walk, up walls.

Three years previously, Jake had watched his first YouTube wall run and had decided to master wall running himself. It was the urban cool and the challenge that attracted him, but also the philosophy. Walls were bad news. Walls were the enemy of exploration. Walls proclaimed:
Beyond this point you may not tread.
Wall running was about breaking those boundaries, mastering your environmentâand yes, if truth be told, impressing your mates.

Jake stepped back and took three deep breaths, rehearsing the stunt in his mind. Then he ran toward the wall with short quick strides. His eyes were not on the wall itself but on the parapet above.
Don't focus on where you are
was his wall-run mantra.
Focus on where you want to be.
He gradually built up the power of his steps and jumped off his right foot.
I'm a spring,
he thought,
a tightly coiled spring.
He placed his left foot at chest level and launched himself upward, scrabbling with his hands to gain extra height. Another small kick from his right foot, and
âreach
!âhe grabbed the parapet with both hands.
Made it.

Jake dangled from the wall, gathering all his force for the final part of the move. Explosive energy was what was needed now. Andâ
liftoff!
He pulled with both arms and pushed with the balls of his feet. A second later the adventurer was lying along the top of the parapet, his quads and biceps burning, barbed wire tugging at his clothes, looking down into the well-lit exercise yard of Leeds Prison.

The
Chameleon stood in the shadows near the back of the crowd. He was eighteen years old and he wore a black cloak with a deep hood. He watched and listened as Sheikh Ahmed Abdullai Keita performed.

The sheikh's reputation had preceded him. All along the edge of the Sahara Desert, people spoke in awed whispers about the miracle man on the white stallion. Now he had arrived in the border town Mondoro, in the south of Mali, and he was doing what he did best. Miracles.

The sheikh sat on a straw mat in front of the chief's hut. He wore purple robes and a white prayer hat embroidered with sequins. Two braided locks of hair hung down, one on either side of his face. He had a short, pointed beard.

Ranged in a semicircle around the sheikh stood the villagers, their cheeks slack with wonder. In the last two hours the sheikh had sucked the malaria out of a sick man, made dozens of cola nuts disappear, and conjured a disembodied floating head out of thin air. Now he got up and ran through the crowd toward his magnificent stallion. "Behold!" he cried. "The djinns of the air are coming to bear me aloft on their warm, invisible hands."

With his arms stretched out on either side, the sheikh lifted into the air and hung there about two feet off the ground. The crowd behind him gasped. There was nervous laughter and cries of "
Allahu akbar!
"â"God is great!" Some cupped hands over their faces in pious supplication.

At the back of the crowd the Chameleon narrowed his eyes and drew his cloak around him more tightly.
It's an illusion,
he thought.
But how does he do it?

The sheikh rose a little farther in the air and put his left foot into the nearside stirrup. Then he swung his right leg over the horse's back, sat down gently, and straightened his robe.

"
Allahu akbar!
"The cries rose on the night air.

The sheikh shook his head from side to side so that his locks swung like pendulums. Then he began to laughâa deep, resonant laugh.

"The djinns of the desert mock you," he said. "You think you prosper, but tragedy is near."

"What tragedy?" The question rippled through the crowd.

"You look at the sky and grin, and you say to each other:
In a few short weeks the rains will begin and we will sow our seed.
Not so, fools! The djinns have hatched a plan. They will withhold the rain you long for. Not a drop of water will fall on Mondoro. Not a single stalk of millet will grow under the sun. Not a single peanut will form in the ground. From every eye salt water will flow."

"Is there nothing we can do?" asked one man. "Perhaps if we give the djinns more cola nutsâ"

"Senegal is hundreds of miles away!" cried another.

"I will take pity on you," said the sheikh. "Have the animals ready by sunrise tomorrow. I will take them to Senegal and perform the sacrifice myself."

Almost Home by Barbara Freethy
The Red Velvet Turnshoe by Cassandra Clark
The Third Day by David Epperson
Twisted Agendas by Damian McNicholl
Trust Me (Rough Love #3) by Annabel Joseph
With or Without You by Alison Tyler
The Light of Amsterdam by David Park
Impossible Places by Alan Dean Foster
All the Right Things (Love in LA) by Harte, Audrey
Highway Song: A Smokey's Roadhouse Novel by Jessa Jacobs
Our partner