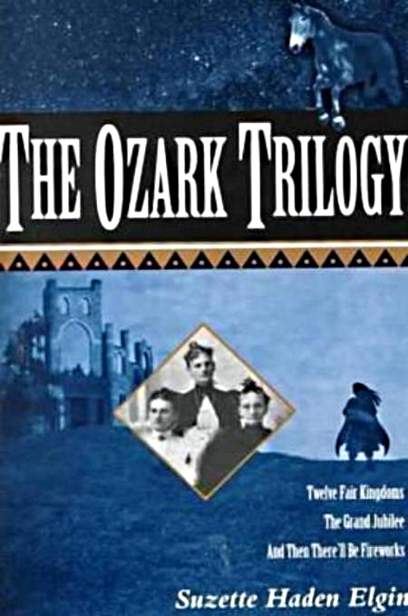 And Then There’ll Be Fireworks

I SHOULD HAVE known that something was very wrong when the Mules started flying erratically. I was misled a bit, I suppose, because there were no actual
crashes,
just upset stomachs. The ordinary person on the street blamed it on turbulence; and considering what they understood of the way the system worked, that was as reasonable a conclusion as any other. However, I had full access to classified material, and I knew perfectly well that it was magic, not aerodynamics, that kept the Mules flying. And magic at the level of skill necessary to fly a bulky creature like a Mule was not likely to suffer any because of a little disturbance in the air. You take a look at a Mule sometime; it surely isn’t built for
flight.

Even someone who’s gone no farther in magic than Common Sense Level knows that the harmony of the universe is a mighty frail and delicately balanced equilibrium, and that you can’t go tampering with any part of it without affecting everything else. A
child
knows that. So that when whatever-it-was started, with its first symptoms being Mules that made their riders throw up, I should of known that something sturdy was tugging hard at the Universal Web.

I was busy, let’s grant me that. I was occupied with the upcoming Grand Jubilee of the Confederation of Continents. Any meeting that it doesn’t happen but once every five hundred years—you tend to pay it considerable attention. One of our freighters had had engine trouble off the coast of Oklahomah, and that was interfering with our supply deliveries, I was trying to run a sizable Castle with a staff that bordered, that spring, on the mediocre, and trying to find fit replacements before the big to-do. And there were three Grannys taken to their beds in my kingdom, afflicted with what they claimed was epizootics and what I knew was congenital cantankerousness, and that was disrupting the regular conduct of everyday affairs more than was convenient.

So ... faced with a lot of little crises and one on the way to being a big one, what did I do?

Well, I went to some meetings. I went to half a dozen. I fussed at the Castle staff, and I managed to get me in an Economist who showed some promise of being able to make the rest of them shape up. I hired a new Fiddler, and I bought a whole team of speckledy Mules that I’d had my eye on for a while. I visited the “ailing” Grannys, with a box of hard candy for each, and paid them elaborate compliments that they saw right through but enjoyed just the same. And I went to church.

I was in church the morning that Terrence Merryweather McDaniels the 6
th
, firstborn son of Vine of Motley and Halliday Joseph McDaniels the 14
th
, was kidnapped, right in broad daylight ... when the man came through me church door on a scruffy rented Mule, right in the middle of a Solemn Service—right in the middle, mind you, of a
prayer!—
and rode that Mule straight down the aisle. He snatched Terrence Merryweather in his sleeping basket from between his parents, and be flew right up over the Reverend’s head and out through the only stained glass window he could count on to iris—Mule, basket, blankets, baby, and all, before any of us could do more than gape. February the 21
st
, that was; I was there, and it was that humiliating, I’m not likely to forget it. The McDaniels were guests of Castle Brightwalei; and under our protection, and for sure should of been safe in our
church
. And now here was their baby kidnapped!

Although it is possible that kidnapping may not be precisely the word in this particular instance. You have a kidnapping, generally there’s somebody missing, and a ransom note, and whatnot. In this case, the Reverend shouted an AAAAmen! and we all rushed out the church door; and there, hanging from the highest of the three cedar trees in the churchyard in a life-support bubble, was Terrence Merryweather McDaniels the 6
th
, sucking on his toe to show how undisturbed
he
was by it all. And the Rent-a-Mule chewing on the crossclover against the church wall, under the overhang. There was no sign of its rider, who could make a claim to speed if to nothing else.

We could see the baby just fine, though we couldn’t hear him. And we knew he was safe in the bubble, and all his needs attended to indefinitely. But he might as well of been in the Wilderness Lands of Tinaseeh for all the good that did us—we didn’t dare touch him.

Oh, we had Magicians there skilled enough to put an end to that bubble and float the baby down to his daddy’s arms without ruffling one bright red hair on his little head. If we hadn’t had them, we could of gotten them in a hurry. It wasn’t that; it was a matter of diagnosis.

We had no way, you see, of knowing just what kind of magic was on the forcefield holding that bubble up in the tree and keeping it active. Might of been no problem at all, just a bit of Granny Magic.
Ought
to of been, if the man doing it couldn’t afford but a Rent-a-Mule. And then it might of been that the mangy thing was meant to make us think that, and it might of been that if we so much as
jiggled
that baby we’d blow the whole churchyard—AND the baby—across the county line. We’re not much for taking chances with babies, I’m proud to say, and we weren’t about to be hasty. The way to do it was to find the Magician that’d set the Spell, or whatever it was, and make it clear that we intended to know, come hell or high water, and keep on making it clear till we got told. Until then, that baby would just have to stay in the cedar tree with the squirrels and the chitterbirds and the yellowjays.

Vine of Motley carried on a good deal, doing her family no credit at all, but she was only thirteen and it her first baby, and allowances were made. Besides, I wasn’t all that proud of my own self and my own family at that moment.

Five suspicious continental delegations I had coming to Castle Brightwater in less than three months, to celebrate the Grand Jubilee of a confederation they didn’t trust much more now than they had two hundred years ago. Every one of them suspecting a plot behind every door and under every bedstead and seeing Spells in the coffee cups and underneath their saddles and, for all I knew, in their armpits. And I was proposing that they’d all be safe here—when I couldn’t keep one little innocent pointy-headed baby safe in my own church on a Solemn Day?