Read The Passion of Mary-Margaret Online

The Passion of Mary-Margaret 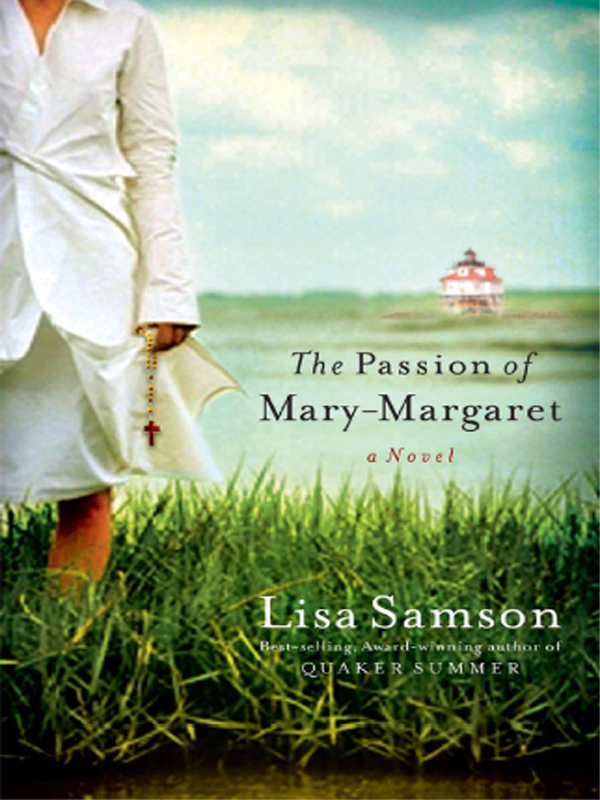 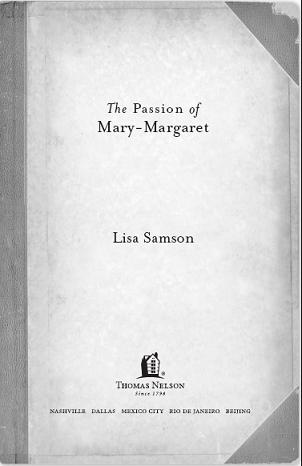 An Introduction to the Devout Life
by Francis De Sales, first edition published in 1609.

Thomas Nelson books may be purchased in bulk for educational, business, fund-raising, or sales promotional use. For information, please e-mail [email protected]

With love and prayers and hope
as you enter this exciting new
stage of life. I'm so thrilled
to see the beautiful young woman
you've become.

I love you.
Aunt Bee

1. The Passion of Mary-Margaret
is not a retelling of Hosea and was not written to be read as such.

2. The term
religious
is used in this work as a noun at times. A “religious” is a priest, a brother, a nun, or a religious sister who is bound by vows to an order or who has received the sacrament of Holy Orders.

3. A religious sister technically is not a nun. A nun is cloistered within the walls of a convent or monastery.

All these years and it has come to this. You've outlived me. I knew it would happen and I knew you'd be the one to find this in my underwear drawer. Why Mary-Francis had to come up with the idea of writing down our lives for the benefit of those who'll follow us is understandable, but no less annoying. I think anonymity in serving God is crucial to the devout life, so I'm only going to let this be unearthed after my passing. However, I suppose Mary-Francis is right in the long run. We have a history here and it's part of the new sisters' story. We all belong to one another, but that doesn't mean they get to know everything about me while I'm still around. A girl has a right to keep some things to herself. But I do promise to tell this with as much love and grace as I can despite my attitude! (There's service in a nutshell for you.) So you can breathe a little easier, my friend.

I've loved serving God with you. I am in good health as I write the following recollections at seventy years of age, and with Sister Pascal due to arrive in a few months, so young and full of the verve we could all use a little of these days, I thought maybe I should heed Mary-Francis's words. Perhaps we might impart a little of what we've learned even when we're gone. Although, indeed, I've never felt particularly wise, just willing. And even then, my brain sometimes protested like an argumentative Sophomore even though my body jumped in the car and took off. Jesus was always at the wheel, but he's not particularly cautious. In fact, he takes hairpin turns at seventy miles per hour if you want to know the truth of it. But as he is God, I've always figured he knows how to drive better than I do. Yes, I've left myself wide open for a smart-mouthed comment from you. Refrain yourself, missy. I'm not a slowpoke, I'm simply careful. And I'm not the one who had my license suspended when I was twenty, might I remind you. Oh, Angie, we've had fun, haven't we?

You've been my good friend, my companion, and my sister in the faith and in the Lord for so long. And we've eaten a lot of ice cream together too, made big messes in the kitchen, and laughed ourselves silly during the monologues on
The Tonight Show
. Selfishly, I hope you miss me. But you're not much younger than I am; I bet I'll be seeing you soon.

P.S. You don't think this will offend anybody, do you? You'll notice I left out the time you, Jude, and I went down to Aruba. Nobody ever needs to know about that, I assure you!

This little collection of my scribblings is dedicated to the School Sisters
of St. Mary's who will follow me in this place. God be with you.
I'm praying for you and shall be until we meet face-to-face.

MY SISTERS, IF I BEGAN THIS TALE AT THE END, YOU WOULD know my heart is full of love even though nothing went as planned. I could tell you God's ways are not ours, but you probably know that already. And I could tell you that his mercy takes shape in forms we cannot begin to imagine, but unless you walked in my shoes for the past seventy years, you could not feel the mercy I have been given. The mercy God gives us is our own to receive, and while sometimes it overlaps with others' like the gentle waves of the bay on the banks of which I now sit, for the most part, the sum and substance of it, the combination of graces, is as unique as we are.

So I will begin this tale at the beginning, on the night my mother conceived me in a moment of evil, a moment not remotely in the will of God, although some might beg to differ on that particular point of theology. It's their right and I don't possess the doctrinal ardor to argue such things anymore. So be it. What you think or what I think on the matter doesn't necessarily make it true. God is as he is and our thoughts do not change him one way or the other. If you've an ounce of intellect, you'll take as much comfort in that as I do.

My
mother, Mary Margaret the First, as my grandmother called her, began cradling my life inside of her when a young seminarian took her against her will by the walls of Fort McHenry. Most evenings after teaching second grade in South Baltimore, she walked up Fort Avenue to the five-pointed star-shaped fort from which the Battle of Baltimore was fought in 1814, rockets red glare, bombs bursting in air, and so forth; and those British frigates sailed up the Patapsco River with Francis Scott Key on deck, penning what would become our national anthem.

The seminarian knew about what my Aunt Elfi called my mother's “evening constitutional” and sometimes he would join her in the gaslit, city twilight, hands clasped behind his backâat least I picture him that wayâbent a bit forward at the waist and listening to her talk about her students perhaps, maybe the other religious sisters, for she had just taken her final vows as a School Sister of Notre Dame. Perhaps she talked about her pupils' parents, or how she enjoyed listening to the radio shows in the evenings in the cramped apartment she shared with her friend, fellow sister, and coteacher Loreto; how their school had been seeking ways to provide at least one good meal to the children a day, considering how many of their parents were out of a job after the crash on Wall Street.

Perhaps as they walked, the sun slanted its rays against the faces of the buildings, turning the stones and bricks from gold to crimson, the sky blazing with magenta and violet as though sheer scarves were waving behind the clouds. Maybe the cobalt night soaked into their clothing during the chill months, deepening the black of their coats, drawing the color out of their scarves and the character out of their features until they happened by a lamplight.

One evening something evil entered into him and he entered into her and I resulted. Did Grandmom tell me? If so, she certainly didn't employ that terminology. My age necessitated more delicate, obscure phrasing, perhaps something about the things only husbands and wives should do being forced on someone else. I can't recall exactly when I found out, but it feels like something I've always known and preternaturally understood. I might have overheard a conversation. I don't know. That my mother was a religious sister in an unwanted pregnancy threw fate completely out of balance. When I was thirteen, I figured I could put things aright somehow, maybe justify my existence by picking up the torch my own birth snuffed out.

It's bad enough to be born from the sin of two consenting adults. But I resulted from rage and control, from one person overpowering another in the assumption his right to take was more important than her right to give. That takes “man meaning it for evil but God meaning it for good” a giant step further. Yet blaming God for the lies of an Egyptian nobleman's wife who didn't succeed in getting Joseph to succumb to her hardly subtle sexual requests and that wine steward's selfish forgetfulness is somewhat different than giving him wholesale credit for rape. You have to draw the line somewhere or pretty soon Ted Bundy truly couldn't help himself and that terrorist they're talking about these days, Osama Bin Something or Other, really is on a holy mission, and who knows where that will end up? That sort of theology shouldn't sit well with anybody, whether you're from Geneva or Rome, so perhaps I have more doctrinal ardor than I realized ten minutes ago! Goodness me. I suppose I've grown slightly opinionated now that I've entered my eighth decade. So sisters, forgive an old woman a little ram bling at times. Not that seventy is
that
old, mind you. Indeed not.

Getting the Love You Want, 20th An. Ed. by Hendrix, Harville, Ph.D
Touched by Carolyn Haines
Pillaging Elinor's Castle [Elinor's Stronghold 1] (Siren Publishing Ménage Amour) by Berengaria Brown
PLEDGE OF HONOR: A Mark Cole Thriller by J.T. Brannan
Thirst No. 1 by Christopher Pike
The Laughing Matter by William Saroyan
The Chase of the Golden Plate by Jacques Futrelle
Crimson by Shirley Conran
I Wonder What Human Flesh Tastes Like by Isis, Justin
Three Weeks With My Brother by Nicholas Sparks, Micah Sparks
Our partner