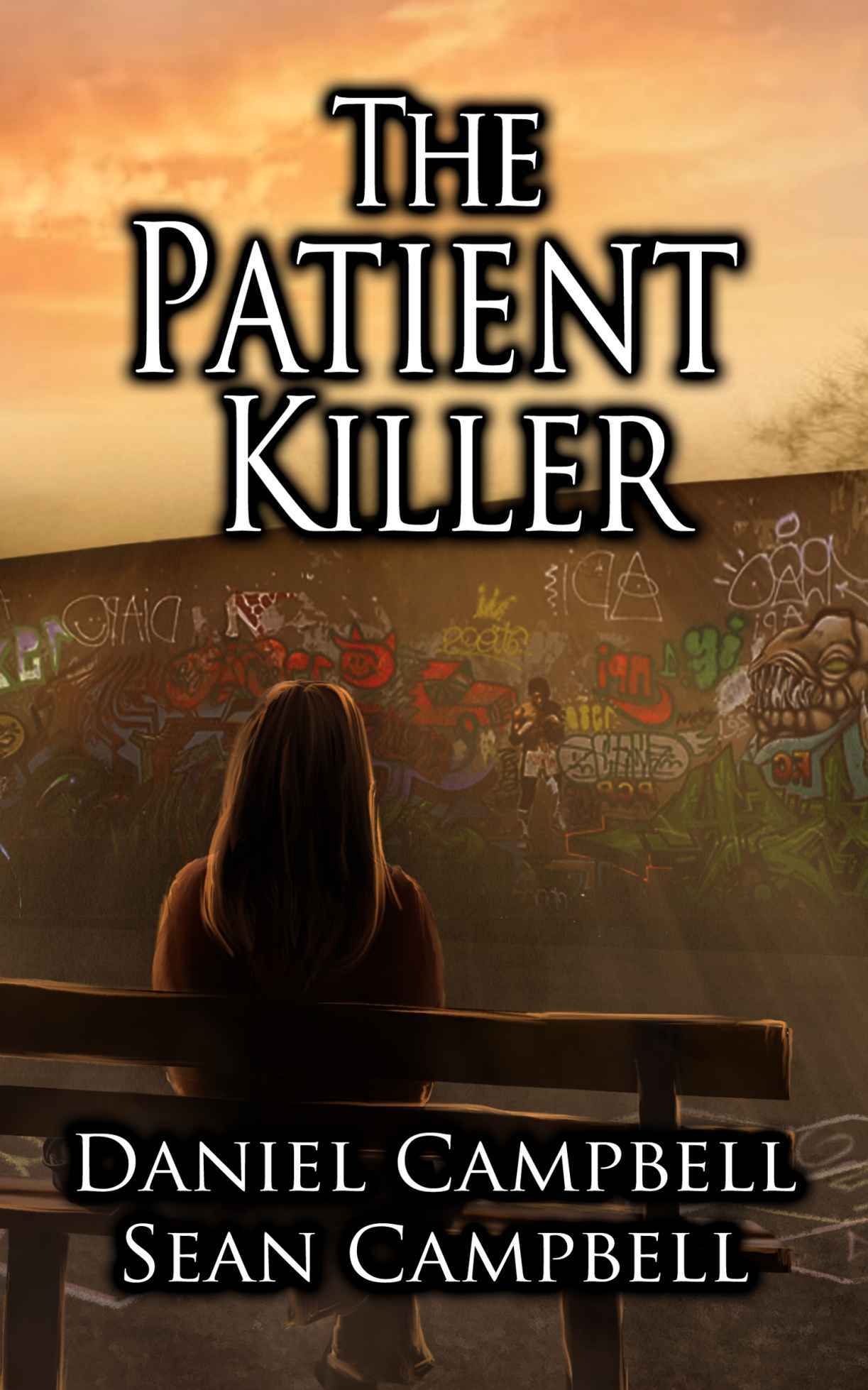 The moral rights of Sean Campbell & Daniel Campbell to be identified as the authors of this work have been asserted by them in accordance with the Copyright, Designs and Patents Act 1988.

All characters are fictitious. Any resemblance to real persons, living or dead, is purely coincidental.

Prologue: Can’t Save Everyone

Chapter 2: The Home of Primrose Kennard

Chapter 5: In the Dark

Chapter 7: Scotch on the Rocks

Chapter 12: The Last House on the Left

Chapter 13: The Students Next Door

Chapter 26: All That Glitters

Chapter 29: Not Your Fault

Chapter 30: A Link to the Past

Chapter 31: Sum Greater Than the Parts

Chapter 35: Only the Guilty

Chapter 36: Another One Bites the Dust

Chapter 55: Out of Place

Chapter 61: Serials to Catch a Serial

Chapter 69: When the Trust Is Gone

A Note from the Authors

Prologue: Can’t Save Everyone

Thirteen hours a day, six days a week, Ebstein could be found in the operating room with his scalpel in his right hand. Specialising in trauma surgery had been a blessing and a curse. He was never short of work – or bodies.

Most of the time, Ebstein and his team knew who would die before they cut them open. Unexpected deaths were something of a rarity. Even the bleeders, fresh from knife fights and car crashes, usually made it off the operating table and into intensive care. That was just the way Ebstein liked it. His patients died, but he rarely saw them go.

The third of November was different. His patient had been rushed in, organs ruptured and haemorrhaging blood faster than they could replace it. She had been as good as dead the moment she’d been pulled from the wreckage of her car.

It should have been simple: patch her up and send her off to the intensive care unit to die.

Scar tissue had put paid to that. The woman had undergone previous surgeries, and her insides were thick with sinewy scar tissue, which meant Ebstein couldn’t suture the arteries in time. Ebstein pronounced at three oh two p.m., and in a heartbeat the whirlwind of an active operating theatre, alive with the sounds of activity bordering on mania, fell into an awkward silence. Ebstein exhaled deeply, grimaced, and nodded his thanks to the assembled staff.

It wasn’t anybody’s fault, other than the guy who’d smashed his car into the victim’s.

Her widower didn’t see it that way. Ebstein found him pacing up and down in the corridor outside the friends and family waiting room. A row of chairs sat unused underneath the window.

The bigger man turned to reveal bloodshot eyes. His jaw was set in a grimace. ‘How is she?’ he demanded.

Taaft’s eyes widened. He stared at Ebstein for a moment, then gave out a guttural roar that reverberated down the corridor. Ebstein took a step backwards, shying away from Taaft.

He was too slow. Taaft snatched up one of the chairs from beneath the window, spun around with it, and slammed the chair into Ebstein’s side, knocking the surgeon to the floor.

Ebstein looked up at his assailant, afraid to speak lest he get hit again. He raised a hand to his head to find his hair wet and matted with blood.

Taaft swung again, and Ebstein’s world exploded in front of him.

T
he room swam in and out of focus when Ebstein awoke. His first thought was to wonder if he’d been out drinking. His head felt like he had been.

Then a hand snapped into view.

‘How many fingers am I holding up?’ a disembodied voice asked.

After a pause Ebstein realised he was being addressed by the hospital’s chief neurologist, Dr Hargreaves. With an effort Ebstein forced his eyes to focus and then mumbled: ‘Two. And no need to swear.’

Hargreaves grinned. ‘Thought we’d lost you for a minute, there.’

‘Big fella took a swing at you with a chair. You crumpled like a pansy. He’s calmed down now, and wants to apologise. He’s convinced you’re going to sue him.’

Ebstein rubbed at his temples, then tried to stand. His legs felt like jelly, but they held steady as he wrenched himself upright.

Hargreaves leapt forward, offering up his arm to support Ebstein. ‘Woah! Slow down there, tiger. You’ve got a concussion. You’re going nowhere. Besides, I’ve got some news for you.’

Hargreaves nodded. ‘We found you a match.’

Ebstein perked up. ‘How good?’

‘You found a six-point match among the staff? That’s incredible.’ Ebstein found himself smiling for the first time that day.

‘We did. But...’ Hargreaves trailed off.

The cemetery tour guide was sobbing uncontrollably when Morton arrived, despite the best efforts of Detectives Bertram Ayala and Ashley Rafferty. A gaggle of tourists with expensive-looking cameras were milling around a little way away from them, snapping pictures of everything and everyone.

‘Ayala, see what you can do about getting rid of those tourists,’ Morton said. ‘And where the hell has Mayberry gone?’

Morton looked around. Besides Ayala and Rafferty, there were the usual array of scene of crime officers scurrying about, including the portly chief scene of crime officer, Stuart Purcell, who was bedecked in a white plastic over-suit. In the distance, Morton could make out the coroner’s silver mane as he hunched low over the body. There was no sign of Detective Mayberry.

‘He was here a moment ago, boss. He said something about an errand he had to run. He went that way.’ Ayala pointed off towards Highgate Church.

Morton arched an eyebrow as if to say ‘And you just let him go?’ and Ayala scarpered off to shoo the tour group away.

Morton turned to the newest member of his team, Detective Inspector Ashley Rafferty. ‘Looks like you and me, then, Rafferty. What’s the name of the lady who found the body?’

‘Roisin Weir,’ Rafferty said. ‘She’s a local. All the tour guides are volunteers from the church. That’s all we’ve got out of her so far.’

Roisin Weir perched atop an altar tomb ten feet away, oblivious to the flashing cameras of her tour group. She had the appearance of a matronly woman: plump, stern-faced, and stout of stature. Her head was bowed, and she had her eyes closed, presumably in prayer.

Morton waited for her to look up and then approached. ‘Mrs Weir?’

The tour guide’s eyes sought out his. They were puffy and red, and her cheeks were stained with tears.
That’s a bit of an overreaction to the death of a stranger,
Morton thought.

‘It’s Ms Weir, thank you very much.’ She spoke in a curt tone, authoritative and quite clearly Irish, but stilted rather than sing-song.

‘I was doing the nine o’clock tour. That’s my group over there.’ Roisin swept an arm towards the group with the cameras. ‘We visited the usual highlights – Douglas Adams, Karl Marx, and the like. Then we came down the path here, and that’s when I saw her. I didn’t realise she was dead at first. That poor lady is always there.’

‘Yes. I already told your officers that.’ Roisin jabbed a finger towards Rafferty. ‘That fellow with a stammer bolted the moment I told him. I don’t know her name, but she’s here almost every day, and so am I.’

That explains the tears.
‘Were you friendly?’

‘Cordial. We smiled and nodded, but we’ve never stopped for a chat. I’m always passing through with a group. I speak six languages, you know, including Italian and Japanese.’ Roisin straightened up and puffed out her chest. ‘That’s why I got that group this morning.’

‘
Parlo nove lingue
,’ Rafferty said with a hint of a smile.

Roisin frowned. ‘You what? Don’t you go confusing me with your schoolgirl pronunciation.’

‘Ms Weir, did you touch the body?’ Morton asked.

‘Lord, no. I called nine nine nine, and then tried to get rid of my tour group, but they weren’t interested in leaving. I suppose they think that it’s part of the Highgate experience!’

‘Thank you, Ms Weir,’ Morton said. ‘An officer will take your details in case we have any further questions.’

Roisin stood up. The pretence of grief was long gone. ‘Is that it? Aren’t you going to ask me if I did it?’

‘No. Can I get going? Only the morning service starts at quarter past ten, and I’d hate to be late.’

‘Of course,’ said Morton. ‘Thanks for your time.’

H
ere lies Hubert Kennard: Nature’s Debt Repaid
. The headstone was engraved in a looping Gothic font in keeping with its neighbours, but it seemed newer and less weatherworn than the others did.

The body, which belonged to a woman, lay atop Hubert Kennard’s grave, her arms tucked under her head like a pillow. It almost looked as if she were sleeping. A pool of blood had oozed from beneath her shirt and had begun to congeal upon the moss.

‘What do you reckon, boss? She’s got to be a relative, right?’ Ayala said.

‘Probably a wife or daughter, if she’s been here every day,’ Rafferty said.

‘Wife,’ Morton grunted as he scanned the surrounding pathway.

Morton pointed below the epitaph at the year of death. ‘There’s not a big enough age gap for her to be his daughter. She’s in her late sixties at least. He died aged seventy-one a couple of years ago.’

Homebody: A Novel by Orson Scott Card
The Stranger Inside by Melanie Marks
This Monstrous Thing by Mackenzi Lee
Kalimpura (Green Universe) by Jay Lake
Embrace Me by Lisa Samson
Doughnut Darlin' (Plus Size Romance 4) by Lynn Cooper
The Rented Bride (Highland Billionaires Book 1) by KyAnn Waters, Tarah Scott
Beating the Babushka by Tim Maleeny
Azazel by Nameless
Daybreak: The Days of Redemption Series, Book One by Shelley Shepard Gray
Our partner