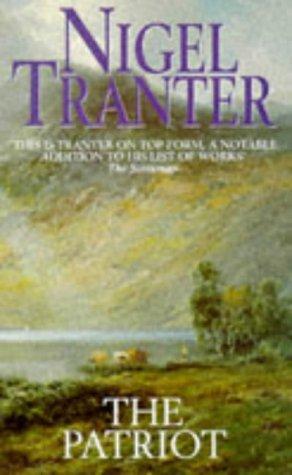 'Dear God - and this is Scotland! Like a rudderless ship in a storm! Is there nobody left in the land to grasp the helm? No spirit surviving in this ancient nation? Have we become a race of serfs, cowards and toadies?'

'Not that, Andrew - never that, surely. But
...
we require a lead. It is leadership we lack. Our natural leaders seem to have died out. Many, to be sure, have been executed, or driven into exile. As were you. But you, at least, have come back!'

'Yes, yes - we have a leader,
one
leader again!' Margaret exclaimed, in a rush, eyes shining.

Also by the same author,

and available in Coronet Books:

Book 1 - The Steps To The Empty Throne

Book 2 - The Path Of The Hero King

Book 3 - The Price Of The King's Peace

The characters and situations in this book are

entirely imaginary and bear no relation to any real person or

This book is sold subject to the condition that it shall not, by way or trade or otherwise, be lent, re-sold, hired out or otherwise circulated without the publisher's prior consent in any form of binding or cover other than that in which this is published and without a similar condition including this condition being imposed on the subsequent purchaser.

In Order of Appearance

John Hamilton, Lord Belhaven and Stenton
: Uncle of
above.

Sir David Carnegie of Pitarrow
: Brother of the Earl of
Southesk, legal luminary.

Margaret Carnegie
: Daughter of above.

John Graham of Claverhouse
: Laird and soldier, later
Viscount of Dundee. (Bonnie Dundee of the ballad.)

James Stewart
or
Crofts
or
Scott, Duke of Buccleuch &
Monmouth
: Son of Charles the Second; Captain-General of the royal forces.

William Paterson
: Banker. Founder of the Bank of England.
Initiator of the Darien Scheme.

The young man frowned as he dismounted in the Sidegate of Haddington. He was, to be sure, a ready frowner; but then, he was a ready smiler too, mobile and expressive of feature, quick to reflect his emotions, temperament and temper both far from placid. His frown now was directed not so much at the clutter of men and horses, children and dogs, all but blocking the street outside Haddington House, which must cause him difficulty in gaining access to the building; for this he was not wholly unprepared, for it was a special occasion. Wh
at he had not looked to
see was the great coach with its six matching bays and lounging flunkeys and outriders, which all but filled the courtyard of the L-shaped tower-house, dominating all. He did not require to examine the vulgar display of paintwork on the carriage-door, surmounted by the newly-repainted coronet, from earl's to duke's, to recognise whose equipage it was.

He found an urchin to hold his mare, nodded to Willie Bryce, Baron-Baillie of the Nungate, who appeared to be in charge outside, and pushed his way through the crush to the forestair and main doorway, where two burgh officers stood guard, reinforced by two of the Duke's own men wearing steel breastplates painted with coronets, hands arrogantly on sword-hilts. The town-guards knew Andrew Fletcher, however, and passed him inside, with only cold stares from the other pair.

The interior of the house was as crowded as was the Sidegate outside, each of the fine first-floor chambers spilling people out into the hallway and corridors, what they were all finding to do not clear. The place stank, despite its excellent proportions, fine panelling and rich decoration, and not just on account of the throng in the June warmth but because the dark basement cellars below were still serving as overflow for the town-gaol, the Tolbooth in the High Street. In the year of Our Lord, 1678,
the gaols of Scotland could be guaranteed to require some extra accommodation.

The young man guessed that what he sought would be found in the finest apartment, the former hall of the house. This, in fact, proved to be the least crowded, folk needfully keeping their distance. Only half-a-dozen men flanked the great central table with its papers, quills, inkwells, wine-flagons and goblets
-
and of that number three hovered about the gross, florid, fleshy man who lounged midway on the window-side, wineglass in hand. Of the other two, one, elderly, short, thick-set but neat, in markedly plainer clothing but wearing a chain-of-office, sat at the head of the table, hands clasped in front of him; the other, a thin, elderly and clerkly individual, bent of shoulder, kept his head well down and his quill scratching over paper.

The young newcomer removed his broad-rimmed hat and bowed - but not too deeply. It was the little man with the chain that he saluted first - for in his own burgh, in theory, the provost ranked supreme. Nevertheless, it was the other, the big, heavy, over-dressed individual further down the table, who spoke.

"Ha - young Fletcher!" he s
aid, thick-voiced. "It's yoursel’ ‘
oking liker a whitrick than ever! Eh, Provost? And hoo's Saltoun looking, these days?"

"Well enough, my lord Duke." That was stiff. Andrew Fletcher did not relish being likened to a weasel, even though he was slightly, wirily built, narrow of feature and quick of manner. But the hulking man before him was uncrowned king in Scotland, so he added, carefully, "As is Lethington and yourself, I hope?"

"Ooh, aye - weel eneuch, lad, weel eneuch. Better than some o' my unfriends would hae me - eh, Provost?" John Maitland, second Earl and first Duke of Lauderdale, Secretary of State for Scotland and Lord High Commissioner to Parliament, had adopted a broad Scots accent since he became so largely London-based — as had James the Sixth and First, of sacred memory, three-quarters of a century before, both allegedly finding it to pay, for some reason.

Provost Scott of Haddington moistened his lips, nodded,
but said nothing. The three fine gentlemen around the Duke laughed heartily.

Fletcher came forward to the table, but to the Provost's end of it, drew out a paper from a pocket, and laid it down before the little man. "I think that you will find that to be in order, Provost," he said.

No doubt it was the list of scrawled signatures at the bottom half of the paper which caught the ducal eye. Maitland heaved himself up, to lean over and peer at it. Frowning suddenly, he reached out and twisted the sheet so that it faced him.

"God's death - what's this? What's this?" he spluttered, bedewing the letter - for also like the aforementioned King Jamie, Lauderdale's tongue was too large for his mouth and he tended to spray moisture even when he spoke normally -which was excellent excuse for frequent liquid replenishment. "Dammit, man - this is . . . this is a nomination-paper! For Parliament. The election - this election!"

"But . . . !" Prominent eyes all but popping, the Duke glared, breathing stertorously. In his sixty-third year and after the life he had led, full but dissipated and indulgent, he was physically in poor shape - although shape is hardly the word to apply to that man. Corpulent, sprawling, he flopped and shook like a jelly. But there was nothing jelly-like about those pale eyes, however podgy and undistinguished the red and sagging features from which they protruded, choleric but shrewd, menacing.

"...
for this Haddingtonshire seat?"

"For what other, my lord, would I bring my paper to the Provost of Haddington?"

"Then - how dare you! Devil roast you, man - in my own county! To think to stand
here!
Against my, my
..
. against Stanfield!" Maitland had rather forgotten his broad accent in his wrath.

"A choice, my lord Duke. Is that not what an election is for? To give the voters a choice. Of men and policies." "Insolent!"

They stared at each other, elderly man and young. And two greater contrasts in appearance, as in character, would have been hard to find, Andrew Fletcher, at twenty-three, so slight, supple, probably not half the weight of the other, keen-faced, alert, hot-eyed, not handsome but personable, straight and slender as a rapier-blade.

The Duke dropped his gaze, to grab at the offending paper with a slightly trembling hand. It was at the signatures of the sponsors, at the foot, that he looked now. The first, in a large if somewhat shaky hand, was
belhaven and stenton.