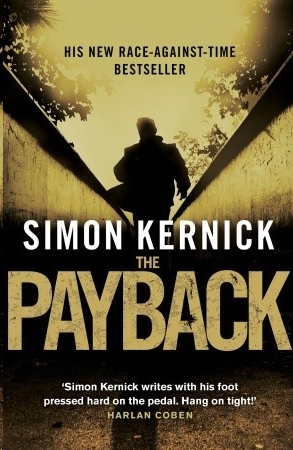 TWO COPS, ONE CITY, NO MERCY

Dennis Milne
is a man with a past, and a past that involves murder.
A former cop, he’s earned his living killing the bad guys – drug-dealers, corrupt business men - people who, in his opinion, deserve to die. For the past two days, he’s been in Manila, waiting for his next target: a young woman who’s made herself some poor life-choices, and some even worse enemies.

DI Tina Boyd
is a woman on a mission.
Tough, spiky and determined, she’s looking for the man she holds responsible for the death of her lover. She knows this man’s ruthless. She knows he’s dangerous. But he’s in Manila, and she’s determined to find him – before he finds her.

Two cops with pasts that haunt them - and a present that could see them both dead. They are about to meet.
And when they do, it’s payback time …

The Business of Dying

A Good Day to Die

For more information on Simon Kernick and his books, see his website at
www.simonkernick.com

Simon Kernick has asserted his right under the Copyright, Designs and Patents Act 1988 to be identified as the author of this work.

Part One: The Axe Rises

This book is dedicated to the occupant of room 927, Victory Executive Residences, Soi Rangnam, Bangkok, November 2006 to August 2008. You, and only you, know who you are, and thank you so much for finding me when you did.

As soon as the man in black walked into the cluttered little office, a briefcase in one gloved hand, a large, lethal-looking pistol in the other, Nick Penny realized that in an occasionally distinguished career of stepping on the toes of those with something to hide, he’d finally planted his size nines squarely on the wrong ones.

‘You’ve been a bad boy,’ said the man in heavily accented yet perfect English, coming towards Penny’s desk and raising the pistol so it was pointed at the centre of his chest – a cold, knowing expression on a face that was otherwise perfectly ordinary.

Penny was frozen to his seat. ‘Please,’ he whispered, conscious of his heart hammering in his chest. ‘I don’t want to die.’

‘No one wants to die, Mr Penny,’ said the gunman evenly. ‘Unfortunately, in this matter you have no choice.’

Instinctively, Penny shut his eyes and gritted his teeth, waiting for the impact of the bullet.

But the gunman didn’t pull the trigger. Instead, he took a seat opposite him. ‘Where you do have a choice, however,’ he continued, waiting until Penny opened his eyes again, ‘is the manner in which
you depart.’ He motioned towards Penny’s open notebook. ‘I want you to write three short letters. The first will be to your wife, asking for her forgiveness, and apologizing both for your deception and for what you are about to do. You will address her as Nat and sign it Nick. The second will be to your former lover, saying that you can’t take the pressure any more. You will address her as T, and sign it Mr P. The third will be to your daughters, Ella and Amelie. Again, you will ask for their forgiveness. You will also add that you hope one day they will understand your actions. You will, of course, sign this letter “Love Daddy”.’

Penny flinched at the mention of his two daughters. He stared at the gunman, wondering how on earth this man knew so much about him. Not only the names of his family, but also that of the woman he’d been seeing secretly for the past three months. He’d worked incredibly hard to cover his tracks there, having no desire to cause Natalie undue upset, but even so, he’d been found out by a complete stranger, and one who even knew the pet name his lover had used right up until the end of their affair, two weeks earlier. Mr P. He’d loved the way she’d purred it when they were in bed.

The man must have bugged her house, as well as his own, which meant he was a professional – something that was obvious by his calm, unflappable manner, and the blankness of his expression. But to Penny, it also meant that he could be reasoned with.

‘Look, there must be some way we can sort this out,’ he said, trying hard to keep the fear out of his voice.

‘I’m afraid there isn’t,’ said the man, his expression unchanging. ‘You are to write those letters. Then you are to hang yourself from the overhead beam with rope that I will provide you with.’

Penny instinctively looked up at the RSJ that ran from one end of the office to the other, knowing it would easily hold his weight, then back at the man sitting opposite him. He was finding it difficult to
believe that this was happening. He’d always known that some of the work he did carried with it an element of danger, but never in his worst nightmares had he expected to be staring down the barrel of a gun and pleading for his life.

‘Start writing, Mr Penny, and don’t worry if you’ve forgotten what to say. I can dictate.’

Penny frowned. ‘You can’t make me do it,’ he said with a lot more confidence than he felt. ‘That gun’s a nine-millimetre. It’ll make a hell of a noise if it goes off in here, and you don’t have a silencer.’ He knew that the downstairs office was empty, and that the guy who worked next door was hardly ever there, but it was still possible that he could spook the man enough to make him think twice.

But it didn’t work. The man gave him a thin, bloodless smile. ‘That’s true. But I’m not going to need to fire it. I have something far better.’ Still keeping the gun trained on Penny, he leaned down, unclipped the briefcase, and produced a small black netbook. He opened it up one-handed and placed it in the middle of the desk, with the screen facing Penny. ‘Press Enter and tell me what you see.’

With a growing sense of dread, Penny did as he was told.

On the screen was a view of the rear of the cottage he shared with Natalie and his two children, taken from the woods at the end of the garden. By the way the screen was shaking slightly, it was clear that someone was filming the cottage with a handheld camera. In the foreground, he could make out the trampoline, as well as the plastic Wendy house that the girls had all but grown out of now. Because of the time of year, it was already dark and there were lights on inside. As he watched, terrified that something might have happened to them already, he saw the unmistakable figure of Natalie, her auburn
hair in a tight ponytail, moving about in the kitchen, looking as if she was getting the girls’ tea ready. The camera panned in on her, so that her top half took up much of the screen as she poured water into a saucepan, blissfully unaware that she was being watched.

Looking up from the laptop, Penny watched as the gunman put a mobile phone to his ear and barked a command into it in Russian. A second later, the camera panned away from the cottage and the man holding it set it down, turning it round so that it was facing him. The cameraman took a couple of steps backwards so that the whole of his top half was visible. He wore dark clothing and a balaclava, and Penny felt his heart lurch as he saw the huge hunting knife in his hand, the metal glinting in the moonlight.

‘The man you see there is an associate of mine,’ explained the gunman matter-of-factly. ‘He’s awaiting my orders. If I tell him to, he will go inside your house and round up your family, and then he will cut your wife’s throat in front of your children, before cutting their throats one after the other.’