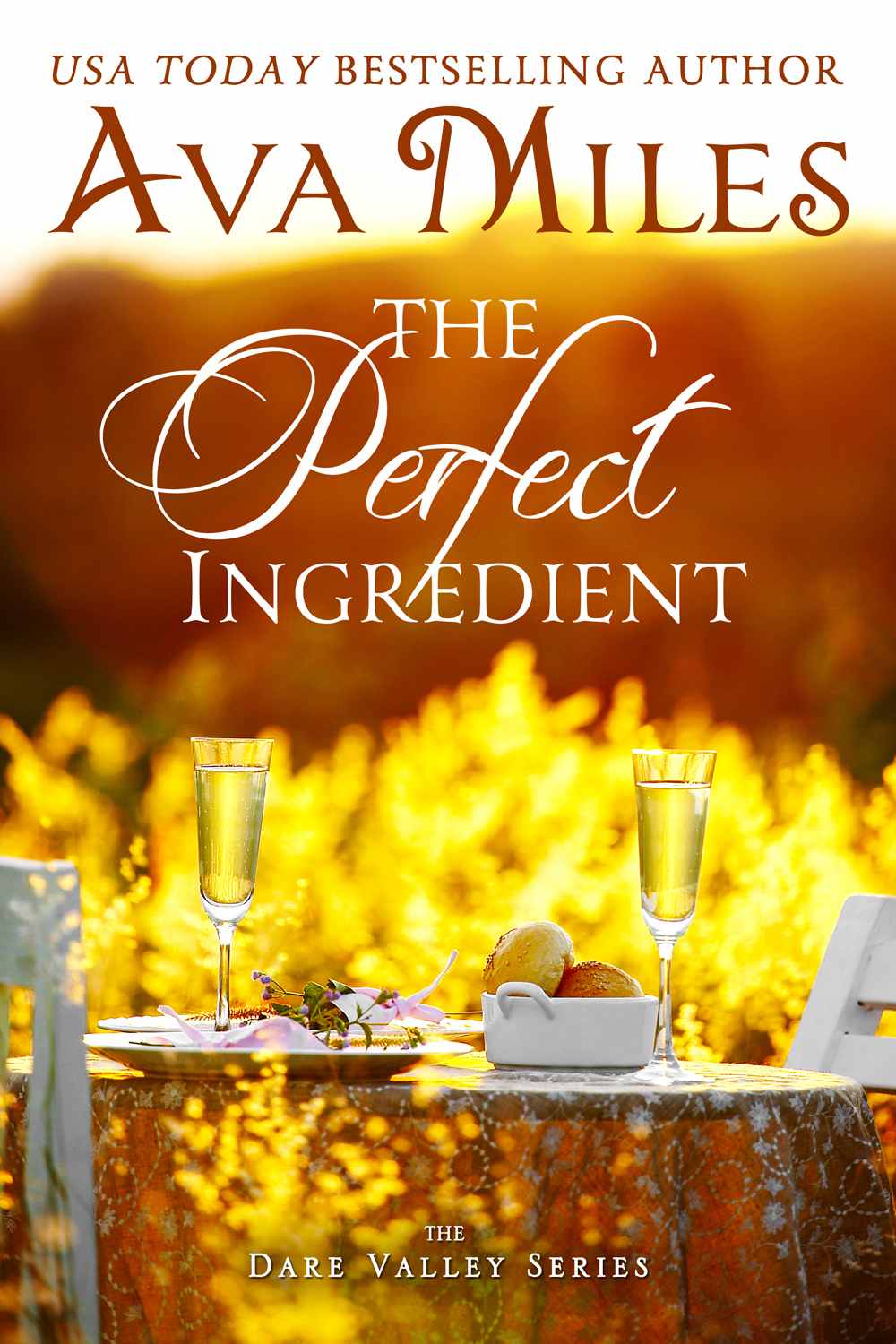 Elizabeth Saunders is a woman of secrets, a rarity in small town Dare Valley. Her life hasn’t turned out like she expected after a tragedy forced her to flee her old life and hide her identity. Now she’s unmasked, hoping to put the past behind her—until the only man who ever captured her heart reappears.

Terrance Waters may look like a sexy Alpha Navy Seal, but he’s actually a celebrity chef. His star is rising with a new primetime TV reality cooking show until his dream hits a snag. His bad-boy image needs to be cleaned up. He’s arrived in Dare Valley to show the network how squeaky clean he can be, working as the head chef at Dare Valley’s famous hotel.

When Elizabeth and Terrance meet, he wants to pick up where they left off, but Elizabeth resists. Terrance is not a man to take no for an answer. Soon the sparks are flying, hotter than ever this time. But the danger from Elizabeth’s past appears, testing their newfound love and Terrance’s dreams of becoming an even bigger star. Can their love triumph over all?

To my brother, Brandon, the youngest in our family of six, who used to draw magical desserts as a little kid and ask me to make them. You were the perfect ingredient to our family, and I love and cherish you so much.

To all women who have experienced violence at the hands of a man. You are not alone.

And to my divine entourage, who keeps cheering me on and helps me move forward always.

My eternal thanks to Team Ava, especially Sienna for bringing joy as well as organization into our partnership; to Greg for every piece of support he gives me visually; to Kristen for always going the extra mile; and for a bunch of others who make this journey so much easier and fun.

Janet Geary for again always being at the ready to answer police-oriented questions.

Matt Mattery for being my go-to on investment banking in the Big Apple.

T.F. For being the part of me that I hold with faith, love, and trust.

And last but not least, all of you wonderful readers, who spread the word about our amazing Dare family, of which you are all members. Thank you from the biggest part of my heart for being you!

It was the last time between them.

As Terrance’s body trembled against her own, Elizabeth closed her eyes to savor his smell, the feel of him—so she could remember everything about him when she was gone.

But it wasn’t enough.

She forced her eyes open to gaze at the bruised, swollen knuckles on his hands, those hands that had caressed her skin so softly, so sweetly tonight after punching a guy flat for looking at her wrong, for calling her horrible names.

Only the people she worked with knew her real name—Elizabeth Saunders—and that Vixen was a mirage. She was Rhett’s poker scout, and being the gaudy, ditzy Vixen allowed her to conduct her duties under the radar. Heck, she was really a Harvard graduate, a numbers geek, who adored poker.

Terrance stirred and kissed her shoulder. “Hey. Are you sure you’re okay about what happened earlier?” he asked softly, tracing her neck. “You seem more…emotional tonight. I was only trying to defend you from that asshole.”

She waited for him to fall asleep.

As she lay next to him, listening to his breathing grow more even, she cursed herself for being a foolish girl. She’d wanted to unmask herself and tell Terrance everything. She had rehearsed her speech to him in front of the mirror earlier as she put on her wig and stage makeup.

Something that would never happen now. The wounds of her past were deep. She could not be in love with a violent man. Certainly not one who made her feel this vulnerable.

Her chest filled with unshed tears as she slid out of bed and dressed.

Terrance turned onto his side and hugged a pillow to his chest like he already missed her. His griffin tattoos appeared to fly across his forearms, as if urging her not to flee.

She crossed the room and scrawled a hasty note on the hotel stationery, laid it on the desk, and turned around to gaze at him one last time.

Terrance Waters would never know Elizabeth Saunders. It was for the best.

She shut the door on him—and her heart.

Terrance Waters had turned into a lovesick head case.

He was on his way to confront the first and only woman who had broken his heart. Elizabeth Saunders, formerly known as Vixen. The odometer on his new gun-metal gray SUV turned over to 333 miles, and he wondered if it was an omen. Having been the chef at The Peacock Hotel & Casino in Atlantic City, he knew a thing or two about lucky numbers.

Right now he didn’t feel so lucky. His stomach felt like he’d just made an appearance on his good friend’s show,
Dangerous Dishes
, where the guests ate things like rotten shark steak wrapped in a seaweed aspic.

It was the only name she’d given him at the time. He had respected her desire not to talk about the past because he hated to talk about it too. No one wanted to hear about the poor New York City street rat, Terrance Waters. People liked success stories, but they didn’t like to hear about the unseemliness that had come before. People called him Chef T now, and that suited him just fine.

His temporary home of Dare Valley glowed like a picturesque town in a Thomas Kinkade painting off in the distance as he turned too fast onto the road that would lead him to her house on the bench. With thirty thousand people, this town was too small for him—so different from New York City. He often didn’t know what to do with himself when he left The Grand Mountain Hotel, where he was the new head chef. Granted, he’d only been in Dare Valley a few weeks, but still…

Tonight, the kitchen had come to a halt at about ten thirty, and since he didn’t clean the grill anymore unless he was pissed off, he didn’t have anything else to do. There was an Irish bar in town called Hairy’s, but it closed at eleven on weeknights like this one.
Eleven!
So he’d decided it was finally time to face Elizabeth.

Rhett Butler Blaylock had settled in Dare Valley, and Elizabeth was here too, working as his publicist now. Terrance hadn’t recognized her at first—she looked so different without all the heavy makeup and flair of Vixen. But he’d quickly worked it out. The shock of seeing her again, of realizing they’d be living in the same small town, had made his gut quiver, something he didn’t have time for anymore. He’d planned to be gracious about it, but she’d lied to his face when they ran into each other at The Grand Mountain Hotel and he called her Vixen. What was it she’d said? Oh, yes.
You must have me confused with someone else.
To add insult to injury, she’d gone public with the information about her dual identity not long after.

Terrance could tolerate a lot, but there were two things he couldn’t stomach: running away and lying. A confrontation was overdue.

Since Vixen—heck, Elizabeth—had struck him as an experienced partner who was straightforward in what she wanted, her behavior was puzzling.

It was time to find out why she’d run and why she’d lied to him weeks ago.

Her house was set down a long, snaky driveway lined with discreet lights in one of Dare Valley’s newer developments. She’d been a night owl like him, so he had no qualms about showing up this late. Plus, all the better if it set her teeth on edge.

Pissing her off would make him feel better since she’d pissed him off plenty.

He exited the car, grateful the snow had melted earlier. Snow in late April. Nothing fun about that. New York was cold, but this was something else. The wind was brisk coming down the mountain, and he could see the pines sway in the eerie light of the half moon nestled in a sky exploding with stars. The silence was eerie, too, when he was so used to big city noise. Nothing disguised his footsteps as he walked to her two-story craftsman home, jogging up the porch steps. When he reached her door, he simply rapped on the wood and waited for her to answer.

And he waited a long while, his ears growing cold in the frigid air. “Elizabeth,” he finally said, “I know you’re home. Your lights are on. Open up. It’s time we talked.”

His P.O. factor was growing. “You’re being childish. Open the goddamn door.” Great, now she’d made him swear, something off his daily menu now. That meant he owed another hundred to his Cuss Fund. Since he’d forget if he waited, he fished a crisp bill out of his wallet.

The door swung open, and there she stood in all her natural glory, her blond curls soft around her face, wearing boring red flannel pajamas. Okay, his Y chromosome had been hoping for a silk peignoir and robe.

Seeing her like this, like a normal woman, was still a shock. Vixen had dressed to be every man’s fantasy in her form-fitting designer dresses and high heels. With her face devoid of makeup, her skin glowed, and the force of her natural beauty stole over him. Then he realized her breathing was rapid, like she’d been working out, and her pulse beat strongly in her neck.

The powder blue eyes he used to drown in during their time together fell to the money he hadn’t yet stuffed into his pocket. “If you’re looking for a hooker, you’ve come to the wrong place.”

Well, that was a nice way to start. “You made me swear, so I had to dole out my punishment.”

“What? I thought that’s what your fans loved about you,” she said, and he heard the quiver in her voice.

Were her lips trembling too? What was going on? Was she afraid of him?

His fans loved his badass attitude, but the president of the television channel that was supposed to air his dream primetime network show was a different story. Lane Adams had chewed him out like he was a bad kid in grade school after seeing his interview on a cable network. Admittedly, it had been an off day…or an on one, depending on how you looked at it. Terrance had cussed through much of the spot, stringing together one innuendo after another. Then, rather than accepting Lane’s medicine like a good boy, he’d sworn a blue streak in their follow-up meeting. He was paying for his brief loss of control. He’d been put on probation by the network, and if he didn’t clean up his act in two months, his show was toast.