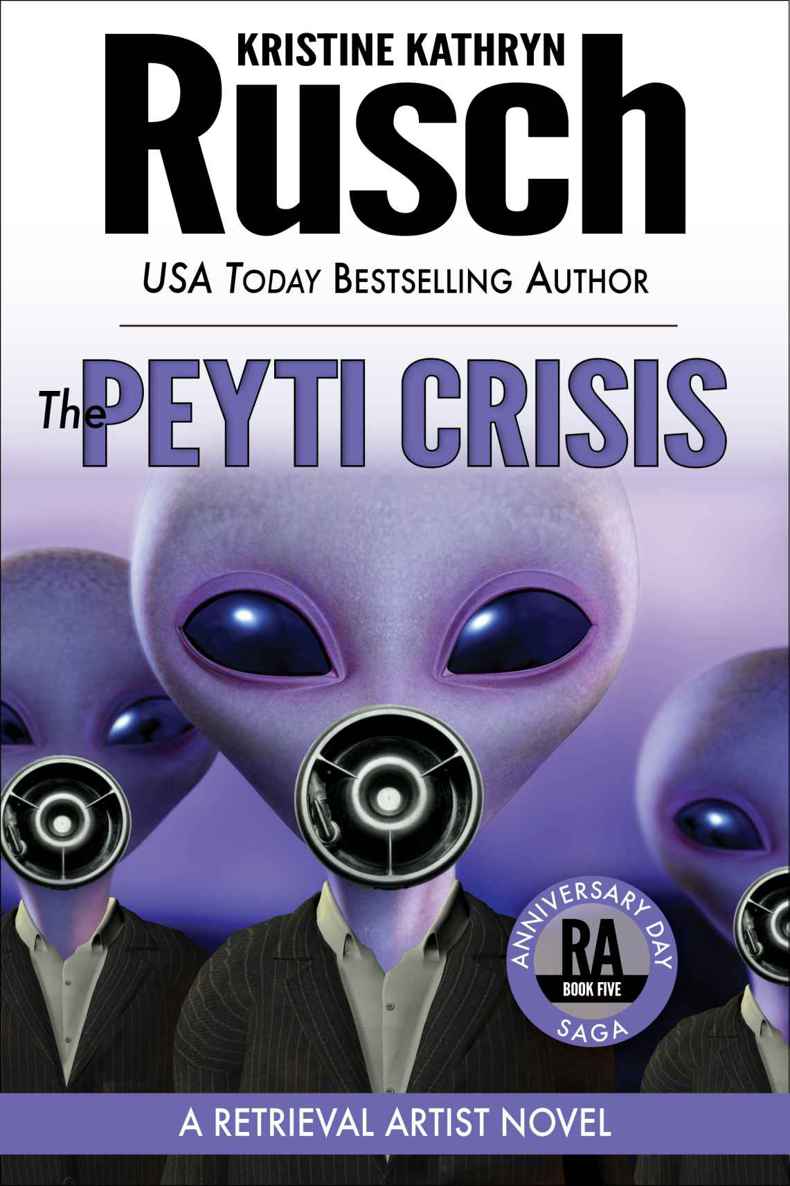 For Paul B. Higginbotham,

who has supported my writing from the beginning, and for being one of the best friends ever.

The Peyti Crisis
started as the third book in what I thought was a trilogy, and then it morphed into the fifth book of an eight-book series. My husband kept me sane through the transition, or at least, as sane as I’ll ever be. Thank you, Dean, for talking me down during each and every book of the series.

I also have to thank Annie Reed, Colleen Kuehne, Judy Cashner, and Jerimy Colbert who have done their best to keep my errors at bay. (All mistakes are mine.)

Special thanks to Allyson Longueira, who has shepherded this large project with aplomb and who has designed the fantastic covers.

And, last but definitely not least, thanks to all the readers who are traveling with me on this journey. Your enthusiasm has kept me going through each and every word.

When one of my regular readers saw the marvelous cover that WMG’s Allyson Longueira designed for this book, he also noted the title and asked, “Isn’t
The Peyti Crisis
a better title for
Blowback?”

Well…no. Because
Blowback
is all about the surprise.
The Peyti Crisis
is about the aftermath.

Before I go any farther with this, let me address those of you who picked this book up because of Allyson’s wonderful cover, and have never read a Retrieval Artist novel before. You’ve jumped into the middle of a long series—which is fine. The series was designed to be jumped into at any point—except for the Anniversary Day Saga books.

The saga is a contained story arc in the middle of the long series. If you want to read the saga, start with
Anniversary Day,
then move to
Blowback, A Murder of Clones, Search & Recovery,
and then read this book.

If you want to read the entire Retrieval Artist series (and you don’t have to in order to enjoy the saga), start with
The Disappeared.

For those of you who have read Retrieval Artist books before and picked this up, thinking it’s the next book after
Blowback
, please go back and read
A Murder of Clones
and
Search & Recovery
before starting this book. You’ll be glad you did.

I write out of order, and normally, I assemble my novels after writing all the pieces, rather like a quilter does when she has the fabric cut and the pieces laid out. The Anniversary Day saga is one big story, so having the luxury to finish the books all at once has allowed me to cut and piece this story together as it should go.

The previous two novels took us into the recent (and not-so-recent) past.
The Peyti Crisis
starts just after
Blowback
and, indeed, was the book I wrote next—with side trips to Epricomm and a few other short stories (some you’ll see upcoming, and some which remain unfinished, written to explain something just to me).

Initially, though, this book didn’t end correctly, but it wasn’t until I was midway through
Vigilantes
(the next book) that I figured out why. I was trying to add plotlines and characters that you won’t see until the last two books in this saga. They don’t fit in
The Peyti Crisis
, so I moved them to the places where they belonged, leaving me with some events that needed to be explored
before
I finished
The Peyti Crisis
. I wrote parts of
Search & Recovery
and
Starbase Human
before I revised this book and made it into the volume you have before you.

Sounds complicated, right? It would be if I were trying to publish only one book a year. But the changes in the publishing industry have allowed me to write and publish the rest of the saga in a short period of time. In consultation with WMG, I decided to publish the last six books in the first six months of 2015.

You don’t need a lengthy recap in the beginning, and I don’t have to worry that you’ll forget what happened from year to year. Plus, it leaves the reading in your hands. You can read all of the books as they appear or save them until July or read one or two in 2015, while reading other things. Your choice, not mine.

I hope you enjoy
The Peyti Crisis
. I loved returning to Flint and the gang. I suspect it shows.

THE VOICE ON her links, so faint she almost didn’t hear it.

She had stocked up on coffee: It was going to be a long night.

She paused the holographic lists. The same name was highlighted on each. Behind the floating list, she could see the bare wall, the one she’d been told not to decorate since she wouldn’t be here long.

Not long had gone from three weeks to six weeks to six months, and now, nearly a year. Somehow PierLuigi Frémont had managed to hire lawyers who actually argued his case, claiming at first the Earth Alliance had no jurisdiction over events in Abbondiado, and then when his lawyers had lost that, that what happened in Abbondiado had been an internal coup, not a crime against humanity.

The Criminal Court had already tossed out one of the genocide charges, saying that crimes committed on the Frontier did not belong in Earth Alliance Courts. Someone, her boss had said, was afraid of taking this case all the way to the Multicultural Tribunals, and losing.

She finally recognized the voice, and more importantly, she recognized the link. It was her private link, the one she’d only given to friends, and the message was encoded, which was why it seemed faint.

Didier?
She sent back. She knew she sounded timid, but she wasn’t sure it was him. Didier Conte was the only person in the entire prison complex who could contact her on her friends link.

Evidence bags? She didn’t have access to evidence bags. And then she realized that she did. Extras were stored in the closet just outside her stupid little office, along with a whole bunch of other supplies that this part of the prison needed.

Why?
she sent back.

Hurry
. And then he signed off.

She stared at the highlighted name, the letters blurring, the image of the person the name belonged to not really registering. Why would Didier need her? Why not call another guard? And why had he signed off so fast?

This was where she usually failed the friendship test. She didn’t care what other people needed, especially if they bothered her in the middle of something.

But the something she was in the middle of was extremely tedious, and if Didier’s locator was right, he was deep inside the prison, where she only got to go if a supervisor was nearby.

The prison wasn’t the most dangerous one Jhena had worked at in her short twenty-one years. That would be a super max on the edge of the Earth Alliance, run by humans but housing all different kinds of aliens who’d broken human laws in various outposts along the way.

She not only couldn’t go into certain parts of that prison because she would be fired; she couldn’t go because she would die without the proper gear. Not everything was set up on Earth Standard. The Peyti section alone had more toxins in the atmosphere than she had seen since her childhood, when her parents were working for Ultre Corporation.

Her brain skittered away from that memory.

She stood. This was probably her only chance to see PierLuigi Frémont without dozens of guards accompanying him. Didier said that Frémont was charismatic and that made him dangerous, not that it really mattered, since it didn’t matter how much the man charmed Jhena. She had no codes, no passkeys, and no DNA recognition that would allow her to open the doors to his cell.

She was quite aware of her place as a lower-level employee of the prison system, one who could be replaced with yet another machine, but wasn’t partly because the law protected certain human jobs against automation, and partly because of the belief that humans could do some work better than machines.

She was grateful for the law, even though she found the belief behind it stupid. But, then, she found a lot of beliefs stupid. She’d learned to be circumspect about it, learned to use those beliefs to her benefit, like now. Even though she hated the tedium, she was getting a hell of a good paycheck, and this job was a stepping stone to better jobs elsewhere in the Earth Alliance System.

All because of a stupid belief.

She grinned, stood, and smoothed her skirt. She wasn’t really dressed to go in the prisoner wing. She usually wore pants for that, and a loose-fitting shirt. Because she hadn’t wanted to come to work tonight, she had made it a game, deciding to look good for once, even though no one was going to see her.

Now, it seemed, someone was. A mass murderer, by all accounts. A fascinating man. Someone famous.

She left the office, pulling the door closed behind her, and then grabbed a box of evidence bags out of the closet across the hall.

She didn’t want Didier to chastise her for not bringing enough bags, so she brought too many.

She tucked the box under her arm, and headed into the high security area. She thought for a brief moment about the cameras that were everywhere, but she didn’t know how to shut them off.

If she got in trouble, she would blame Didier, say that he had asked for her help, and she didn’t know she wasn’t supposed to give it.

But no one around here looked at the camera footage unless there was a problem.

And she hoped that despite his tone, Didier hadn’t caused a problem. She hoped he just needed a little bit of help with something.

The Rejected Suitor by Teresa McCarthy
Hope Springs - 05 - Wedding Cake by Lynne Hinton
Shooter: The Autobiography of the Top-Ranked Marine Sniper by Gunnery Sgt. Jack, Capt. Casey Kuhlman, Donald A. Davis Coughlin
Man of Misconceptions : The Life of an Eccentric in an Age of Change (9781101597033) by Glassie, John
Forget Me When the Sun Goes Down (Forged Bloodlines Book 11) by Lisa Olsen
THE HOUSE AT SEA’S END by Griffiths, Elly
Birth of a Dark Nation by Rashid Darden
Goal-Line Stand by Todd Hafer
Me and Mr. Write by Lewis, Cassandra P.
Leave the Lights On by Stivali, Karen
Our partner