Read The Phantom Killer: Unlocking the Mystery of the Texarkana Serial Murders: The Story of a Town in Terror Online

The Phantom Killer: Unlocking the Mystery of the Texarkana Serial Murders: The Story of a Town in Terror 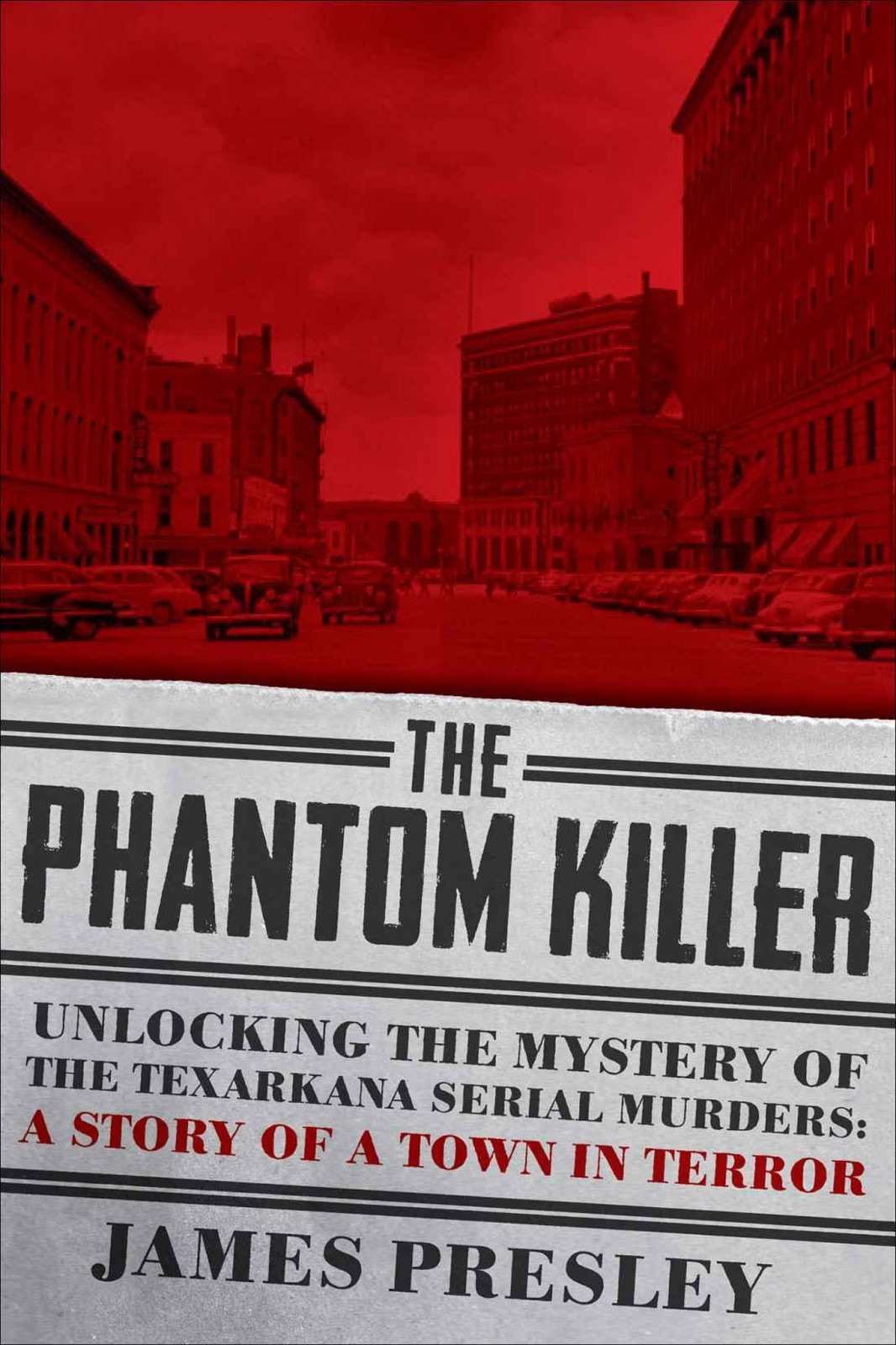 UNLOCKING THE MYSTERY OF
THE TEXARKANA SERIAL MURDERS:
THE STORY OF A TOWN IN TERROR

To the memory of

and to their families and friends.

May they always be remembered.

I have arrived in Texarkana, the home of the Phantom Killer. I have met a newspaperman named Graves. I have checked into the Grim Hotel, and the hair is rising on my neck.

The people were panicky. They were really panicky. I had never in my life run into anything like it.

CHAPTER 1
Stranger in the Dark

CHAPTER 3
Double Death in a Car

CHAPTER 5
A Boy, a Girl—And a Gunman

CHAPTER 11
Nobody Is Safe!

CHAPTER 14
Behind a Serial Killer’s Façade

CHAPTER 22
Back in Court

CHAPTER 23
On the Witness Stand

CHAPTER 24
“Beyond Belief and Incredible”

M
y personal interest in the Phantom murders, officially unsolved since 1946, traces from boyhood. My uncle, Bill Presley, served as sheriff of Bowie County, Texas, where most of the attacks took place. Later as a teenaged police reporter for the
Texarkana Gazette
I came to know the investigators, as well as reporters and editors who’d covered the story. Eventually doctoral studies in history enabled me to add perspective to the ravages of a willful domestic terrorist.

The case cried out for a reliable record to preserve the known facts, dig up new ones, and separate the substantive evidence from the spurious and imaginary. This book applies the tools of history to explain how and why the crimes and the panic happened—and seek a solution.

The Texas Department of Public Safety labeled it “the Number One unsolved murder case in Texas history.” That’s a lot of crimes over many decades in a state hardly celebrated for its peacefulness. “As a puzzle,” wrote Dallas columnist Kent Biffle, “the case remains more popular than sudoku, but seemingly uncrackable.” National and regional media continue to revisit the tantalizing case. The Internet, with Wikipedia in the lead, ripples with references. The Learning Channel’s “Ultimate
Ten,” on which I appeared, classified it as one of “the most notorious and intriguing unsolved crimes in history,” in a dead heat with Jack the Ripper’s 1888 London rampage. The Ripper killed five women. The Phantom killed five victims, badly injured three others, as he hunted couples at a disadvantage in the dark.

This account offers an antidote for the rumors and distortions caused by time, journalistic excesses, and, on occasion, clumsy police work. With the principal participants dead (most of whom I interviewed at some point in their final years) and documentary evidence fragile and scattered and possibly on the way to being lost forever, this was the last chance to set the record straight and close a popular but vexing old mystery.

T
ucked away in the far northeastern corner of Texas—or southwestern edge of Arkansas, if you prefer—Texarkana mostly goes unnoticed, the abandoned stepchild of both states. Occasionally its geographical anomaly rescues it from oblivion, by attesting to Texas’s size. Such as the hoary anecdote of the salesman whose home office in Chicago orders: “Check on our new customer in Texarkana.” The salesman, based in El Paso, fires back: “Go yourself. You’re closer than I am!” It’s true. Texarkana, spilling over into Arkansas and near the boundaries of Louisiana and Oklahoma, is nearer to Lake Michigan than to its sister city on the Mexican border.

Commonly spoken of as one city, Texarkana actually is a shorthand term for two separate political entities sprawled carelessly astride the state line: Texarkana, Texas, and Texarkana, Arkansas, each with its own mayor, municipal government, police, and firemen. The United States and the Republic of Texas set the boundary in 1841, before there was a Texarkana. East is Arkansas and West is Texas: Numbered streets are preceded by either a W or an E to designate which side of town they’re on. East 16th is in Arkansas, but cross the state line in search of the nearest counterpart and you’ll find West 23rd in Texas. Fitted together like asymmetrical line
dancers glued to each other, the cities were, and are, joined physically at the hip, sharing utilities and a chamber of commerce, while periodically behaving like dysfunctional Siamese twins.

In a solidly Southern town, with nearly a third of the population black, the obligatory Confederate memorial features a stone soldier forlornly staring southward. Yet a cosmopolitan mix of ethnic groups—Irish, Italian, German, Jewish, Greek, and French—not found in most Southern towns its size, by the 1920s supplemented the predominant English and Scotch-Irish Caucasian stock. Baptists and Methodists led in numbers, with Catholics a significant minority, and with one Jewish temple.

Duality has characterized—or plagued—Texarkana from its founding in 1873, in the waning days of Reconstruction. Each side of town had its own separate post office until 1892, when the first joint one was built on its present site on the state line. That one was razed in 1930. Three years later the present one was built, combining Texas pink granite and Arkansas limestone in its materials. The state line defined even religious jurisdictions. The city’s two Catholic parishes—Sacred Heart in Texas, St. Edward in Arkansas—were in different dioceses, Dallas and Little Rock. Protestant denominations experienced similar realities. Crosstown rivalries flourished. The annual football game between Texas High’s Tigers and Arkansas High’s Razorbacks often included fistfights in the stands. One photo promoting the city portrayed a pair of young twins with boxing gloves confronting each other. The most popular symbol of duality, though, was a postcard that depicted a man on the Texas side clutching a rope tied to a donkey on the other side of the state line. In the background the massive United States Courthouse and Post Office, billed as the only one in America situated in two states, imposingly straddles State Line Avenue. The postcard’s caption signified, perhaps humorously, perhaps not, a potential for friction.

A MAN IN TEXAS AND HIS ASS IN ARKANSAS

To balance things out, a competing card placed a Biblical ass in Texas.

In the nineteenth century the timber industry flourished in both states with an abundant supply of pine and hardwood, creating jobs, albeit often dangerous ones, and a number of local fortunes. Texarkana’s location
made it a natural railroad center as lines crossed from almost every direction en route to either coast. The town became known as “that lively railroad village” festooned with saloons and bawdy houses and rampant with crime. “Texarkana is the gateway between the East and Texas, and the half-way house, where burglars, thieves and robbers stop momentarily to recuperate,” commented one early observer.

The most horrifying tragedy of those days occurred on a July night in 1882. A violent storm drove dozens inside the Paragon Saloon and gambling house for refuge. Lightning struck the building next door, under construction, and strong winds blew a wall onto the saloon, shattering timbers, knocking over kerosene lamps. A fierce fire broke out, compounding the plight of those trapped beneath the rubble. At least forty men perished. One, pinned painfully and hopelessly, ended his agony with a gunshot to his own head.

With its location “a veritable magnet for the criminally inclined,” an early editor charged, “the great majority of Texarkana’s early settlers were gamblers, gunmen and other lawless individuals who flocked into towns where law enforcement was weak.” By 1888, by one accounting, the fledgling city boasted twenty-three saloons, eighteen of them on Broad Street, with flashy names like Cosmopolitan, Hole-in-the-Wall, Gateway, Triangle, Golden Star, and Red River. Over the years the city—or cities—grew out of its frontier roughness but never shook off the image entirely. Open saloons and gambling dens vanished in time; brothels continued to flourish. Organized prostitution persisted well beyond World War II.

Texarkana has since remained a crossroads. Four major highways intersect in the town today. In the 1940s, four rail lines provided passenger service, which was on par for a city several times Texarkana’s size. American and Mid-Continent Airlines each offered two flights daily. American’s DC-3s landed and departed from either coast; Mid-Continent flew north and south. Buses and automobiles brought in people of all descriptions and statuses. A large sign above U.S. Highway 67, a major artery connecting Dallas and Little Rock, proclaimed the city to be the “Gateway to the Southwest.” Texarkana, as the unofficial capital of this Four States Area, became a stopover for national travelers, as well as a
regional hub for commerce—and for crime. Law enforcement grew knottier, as criminals crossed state lines to avoid arrest.

Intensifying Texarkana’s crossroads status, World War II jerked the region out of the Great Depression. Red River Ordnance Depot, later elevated to Arsenal status, and Lone Star Army Ammunition Plant nearly doubled the population. Workers and their families swarmed in from all points, as far off as Illinois and Michigan. The economy boomed. So did the work of the police.

Miss Enchanter - Ophelia's Story by Carol Colbert
The Postcard by Beverly Lewis
The Raven's Wish by King, Susan
Art of a Jewish Woman by Henry Massie
Demon's Plaything by Lydia Rowan
A Highlander for Christmas by Christina Skye, Debbie Macomber
Tempted by a SEAL by Cat Johnson
The Baby Group by Rowan Coleman
The Silver Thread by Emigh Cannaday
Before the Fire by Sarah Butler
Our partner