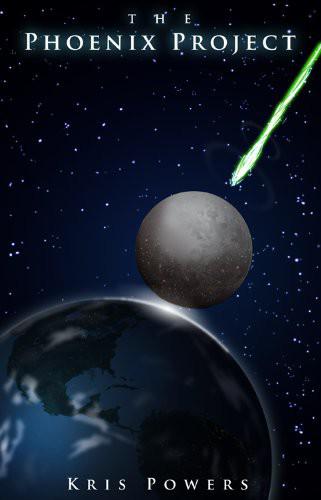 BEING THE FIRST PART OF

This is a
work of fiction. Names, characters, places, and incidents either are the
products of the author’s imagination or are used fictitiously, and any
resemblance to actual persons, living or dead, business establishments, events,
or locales is entirely coincidental

This book,
or parts thereof, may not be reproduced in any form without permission.

“The entire
fleet’s gone?” Ranik asked. He peered over Lathiel’s shoulder and focused his slit,
copper eyes on the small screen.

“Every last ship was destroyed,” Lathiel replied.
He discerned distant pieces of burning wreckage floating through space. The
debris was all that remained of their Ferine fleet. Lathiel thought of all his
friends, even family, who had just given their lives in one last effort to
defend their home world.

“We’re not soldiers and our fleet was
outnumbered fifty to one.”

“I had friends on those ships,” Ranik said.
A look of grief wrinkled his aging features.

“So did I. We don’t have any options left.
We have to use our ancestors’ weapon.”

“The recoil is still a major problem. We’re
going to lose a lot of people here.”

“All of our defensive lines have been
breached, Ranik. This is all we have left.”

“I used to look up into the night sky on
our home world before you were even born. Every evening I’d see a big crater on
that giant rock of Helas so far up in the sky and know that it was this
station. I never thought we’d ever come here.”

The two Ferine watched the monitor showing the
enemy fleet closing in on their home world while they watched from their safe
vantage point on Helas.
Others rushed around behind them in the small
command post located at the top of the cannon’s wide maw. They hurried to ready
the relic for a task it was supposed to have undertaken a millennium ago.

“The Nevargh fleet is nearly in range of
the weapon. Bring the generators to maximum power,” Lathiel

Ranik shook his head and headed to a nearby
console from a bygone era. The moment he arrived at the console he flipped
several switches and a distant rumble was heard from deep within the planet.

“They’re nearly within optimum position,”
Lathiel said. “There are millions of the dead from across the Old League who
would cheer right now if they could.”

“I still can’t believe they betrayed us. We
trusted them. The entire League trusted them.”

“And we paid for it. They’re in optimum
range. It’s now or never.”

“Do you want me to do this? You’re young,
Lathiel. I don’t want you to be responsible for something this destructive,”
Ranik asked.

His finger hovered over the button that
would activate the antiquated cannon. Lathiel imagined he could see the
shadows of his ancestors walking across the room in agitation. He consoled
himself with the thought that at the very least, they weren’t going to use it
against their own species, as was the original intent a millennium ago. “I
volunteered to lead this mission. This is my responsibility and I will pay for
what I do here.”

Lathiel pressed the button. A moment later
the floor jumped from the jolt of the cannon’s waking. Lathiel lost his balance
as the ceiling began to cave in.

A deep crater marring the mother—world of
Helas began to glow.
The Nevargh armada passing Helas didn’t notice the massive
emerald circle on the barren planet’s surface as they closed in on its orbiting
moon of Cartise. The bare rock around the impossibly wide chasm began to
tremble. As the quake intensified, great cracks in the surface formed around
the circular mouth of the weapon. Without further warning, it belched a great
firestorm of emerald energy at the enemy armada. The deepest night turned into
blinding starlight. The fleet dissolved in the apocalyptic weapon’s brilliance.
Not satiated and far from spent, the blast continued into the void and tore
through the space—time continuum.

The bright comet of destructive energy vanished
from that part of the galaxy.

The space—time continuum erupted into chaos
outside Earth’s Solar System. It writhed from an enormous power eager to
manifest itself. Nearby, the Coalition’s sensor platforms sparked as an intense
tidal wave

of gravity radiated out from
the distortion.

The argument of stagnancy in the century long cold war
between the Alliance
and the Coalition has been heavily debated within historical venues. What the
detractors don't understand is that we don't refer to the incredible advances
due to the arms race, but due to the lack of advances in the economic and
social structures of both sides.

I therefore submit that it
was due to these factors that the Council was intent on altering the balance of
power. What happened afterwards was serendipity not of their making. How could
it have been?

Analysis of the One Hundred and One Year Cold War

The Alliance
Nine O’clock Shuttle arrived at Space Station Alpha orbiting Earth from which a
sea of navy blue and polished rank pins flowed onto the pressurized deck. A
single officer shifted away from the migrating group, and took an elevator to
a deck five floors from the peak of the station’s summit.

Three gold stars adorned each side of the
raised collar on the man’s uniform, indicating the rank of Vice Admiral. Elliot
Fredericks carried a suitcase filled with paper thin electronic documents
intended for his superiors. The
links
held every last detail of the
project that he had headed for the last ten years.

Elliot accepted the project a few months
after his last command of the
Norfolk
had expired. He vowed never to command another ship again after that day. Elliot’s
desk job had earned him his last three promotions and a place of respect within
the Alliance
forces.

He exited the elevator and took the
familiar path to Maria Peterson’s office down the wide, curving corridor. Reaching
the double—door entryway to Maria’s office, Elliot took a moment to ensure his dark
hair was straight and strode across the threshold just before the doors moved
out of the way upon detecting his approach. A young adjutant sat at a desk in
the small waiting room.

“Hey Lieutenant,” Elliot said. The lean man
looked up from his work.

“Hello Sir,” the man said with a warm smile.
“Admiral Peterson had something unexpected come up and asked you to wait a few
minutes.”

“No problem,” Elliot replied. He took a
seat on a tan couch on one side of the room.

“What kind of game are you playing now?” the
Coalition General demanded. He was dressed in an olive tunic adorned with three
gold stars on each side of his collar.

“General, I don’t even know what you’re
talking about. All I know is what I was told. You wanted to discuss the Hades
Three Sector and I accepted your signal. So, what’s the problem?” Maria asked.

She tried to avoid the Coalition General whenever
possible. He had stared at her chest whenever they both had attended an event.
Maria was surprised that he was actually looking her in the eye across the
monitor’s live feed.

“You know damn well. Why would you damage
our sensor buoys?”

“Then who did? There isn’t an Easter Island
Agreements to blame everything on anymore, so who else could have fired on
them?”

“It wasn’t us. We don’t have any ships in
that area of space and it has no tactical value to us,” Maria replied.

“What do you want, General?”

“An apology for starters.”

“I won’t apologize for something we didn’t
do.” Maria paused and put a hand to her brow. “How many sensor arrays are we
talking about anyway?”

“You know damn well how many.”

“That only covers a few thousand cubic
kilometers

of empty space outside the
solar system. If you’re so insistent about explanations, I’ll send a ship to
investigate,” Maria placated.

“We’re already sending warships to find out
what you’re up to.”

“Then you won’t mind if we confirm it,”
Maria said.

“Fine. I’ll be happy to have one of your
ships there when we expose your sabotage. INN
will hear about this.”

Shame the Devil by George P. Pelecanos
[Barbara Samuel] Night of Fire(Book4You) by Unknown
The Kashmir Shawl by Rosie Thomas
The Winnowing Season by Cindy Woodsmall
I'Ve Got You by Louise Forster
Patricia Dusenbury - Claire Marshall 01 - A Perfect Victim by Patricia Dusenbury
Dangerous Reality by Malorie Blackman
Apocalypse Asunder by David Rogers
Luna Tick: A Sunshine Novel by Merriam, Angie
Paris, Paris: Journey Into the City of Light by David Downie
Our partner