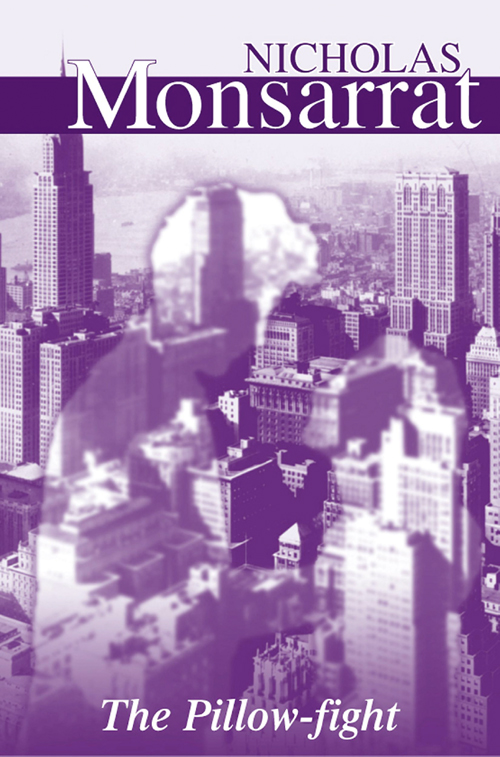 The right of Nicholas Monsarrat to be identified as the author of this work has been asserted.

Nicholas Monsarrat
was born in Liverpool, the son of a distinguished surgeon. He was educated at Winchester and then at Trinity College, Cambridge where he studied law. However, his subsequent career as a solicitor encountered a swift end when he decided to leave Liverpool for London, with a half-finished manuscript under his arm and £40 in his pocket.

The first of his books to attract attention was the largely autobiographical ‘This is the Schoolroom’. It is a largely autobiographical ‘coming of age’ novel dealing with the end of college life, the ‘Hungry Thirties’, and the Spanish Civil War. During World War Two he joined the Royal Navy and served in corvettes. His war experience provided the framework for the novel ‘HMS Marlborough will enter Harbour’, and one of his best known books. ‘The Cruel Sea’ was made into a classic film starring Jack Hawkins. After the war he became a director of the UK Information Service, first in Johannesburg, then in Ottawa.

Established as a sort after writer who was also highly regarded by critics, Monsarrat’s career eventually concluded with his epic ‘The Master Mariner’, a novel on seafaring life from Napoleonic times to the present.

Well known for his concise story telling and tense narrative, he became one of the most successful novelists of the twentieth century, whose rich and varied collection bears the hallmarks of a truly gifted master of his craft.

‘A professional who gives us our money’s worth. The entertainment value is high’- Daily Telegraph

Johannesburg from the air is
not
like a miniature New York, whatever the South African Tourist Corporation may claim; but its compactness and modestly tall buildings do vaguely recall a stunted Manhattan Island surrounded by sandcastles. The sandcastles, of course, are grown-up toys; they are mine-dumps, to be exact, the yellow dross of a full half-century’s frenetic burrowing for gold. For the rest, it is a sprung up, counter-jumping town, as brash, nervous and noisy as its newest millionaire.

One could never return to it without wondering who had gone broke, who had shot himself, which of one’s best friends had been raped or robbed, who was sleeping with whom, and who, incredibly, was not. But it was still my town, and I loved it dearly. And to set the record straight, no one who lived there would dream of calling it Joburg.

As we dipped and circled for our landing at Jan Smuts Airport the man in the next seat, who had been trying all the way from Cape Town to project his personality (and much else besides) in my direction, leant across and said: ‘Can I help you with your seatbelt?’

He had called me ‘young lady’ eight times in three hours. He had small boiled eyes, bristly hair on the backs of his hands, and a snake’s-head belt straining across a bulging stomach. For me (and perhaps, desolately, for himself) he was a natural Doctor Fell.

‘Is anyone meeting you at Joburg?’

Reacting to ‘Joburg’, and also to the more rare annoyance that he did not know who I was, I answered curtly: ‘Yes.’

‘Yes, my family. One Jew, one Greek, and one Afrikaner pansy.’

‘Ha! Ha!’ His hand reached out to pat my knee, and changed its mind halfway. (One of my dearest friends swears that she stubs out her cigarettes on such hands. Myself, I have never gone further than flicking hot ash on them.) ‘The young lady has a sense of humour, I can tell.’

The young lady busied herself making up her mouth, while the youngish gentleman watched her sideways. Presently, remembering the word ‘Jew’ in my last answer, he said: ‘Well, they call it Jewburg, don’t they?’

I paused – eyes to mirror, lipstick to mouth: ‘Who?’

‘That’s what Joburg is called,’ he laboured. ‘Jewburg. Because of all the Jews.’

I said it like that, because yet another of my dearest friends claims that all you have to do in these circumstances is to keep on asking silly questions, until the intruder shies away from the charge of molesting female lunatics. But suddenly I thought: To hell with this clod … I ran my own advertising business, with three branches and an annual turnover of four hundred thousand pounds. I wrote a weekly column that had half the adult delinquents in South Africa permanently scared into good behaviour. Ihad large grey eyes, and the legs that God allowed me. I didn’t have to give anyone a gentle brush-off, not at any time, and especially not when there were anti-Semitic overtones hanging in the air.

Thus, before he could answer, I jumped in, with the necessary vehemence. ‘The Jews made Johannesburg!’ I proclaimed loudly. ‘In fact, they made most of South Africa, too! We’re proud of that. My father, the Chief Rabbi–’ suddenly, alarmingly, I couldn’t remember whether rabbis were meant to be celibate or prolific; but I took a chance, ‘–was the first man to build an opera house on the Witwatersrand!’ (That sounded unlikely, and not only for the fact that it would make me approximately sixty-two instead of twenty-six; but it was a moment for plunging on. If I was going to be a Jewess, I’d be a damned good one, like Jael …) ‘Both Caruso and Melba made their débuts there. Don’t you think that’s something to be proud of? If there
are
a lot of us in Johannesburg, it’s a bloody sight more than dirty old fascists like you deserve! What the hell do you mean, “Jewburg”? Are you trying to insult me?’

If he hadn’t been strapped in, I swear he would have jumped straight out of the window. Admittedly, I had the advantage, as girls who are prepared to scream and wave their arms always have; but still, I could not repress a warm feeling of accomplishment … His mouth made a wet and foolish ‘O’, which God knows was all I wanted it to do: and then he hunched away from me without another word, while the heads that had swung in our direction turned regretfully back again. In silence we glided down and touched the tarmac, making the sort of landing that South African Airways pilots reserve for their nicest passengers.

I was first off the plane (a man called out: ‘Miss Kate Marais, please!’ and I obeyed, but hesitantly, as a shy young lady should). The wonderful Johannesburg air surrounded me with an immediate, insistent relish as I went down the steps. Johannesburg is 6,000 feet above sea level; it is hot and dry during the day, cool and dry at night; like Mexico, it is ideal for eating, drinking, lovemaking, working, or doing nothing in comfort and elegance.

Only occasionally – say, once every two years – does the roof fall in; then lightning strikes and burns up rows of houses, hailstones as big as the traditional pigeon’s egg shatter tiles and windows, tornadoes rip through the native locations, killing and mutilating anyone who gets in the way.

But today was not one of those days, and as I crossed the airport apron, I felt that fabulous climate invading my lungs, caressing my skin, pricking my spirit. It was no wonder, I thought, that they all behaved so badly here. What else could happen, when one had this daily and nightly injection of potency?

The three figures I had been expecting to see were waving to me from behind the barrier. I waved back, and kissed my hand to my family, the one I had described to the short-winded Casanova on the plane as consisting of a Jew, a Greek, and an Afrikaner pansy. A few moments later, I was with them.

Perhaps only in Johannesburg would one be met at the airport by three men named, respectively, Joel Sachs, Eumor Eumorphopulos, and Bruno van Thaal.

Joel Sachs was all that his name implied: a young, brown-eyed, Johannesburg Jew, smart, hardworking, uniquely honest, capable. He was the Johannesburg representative of Kate Marais Advertising, and I could not have wished for a better man – nor, incidentally, for a nicer person. The Jews in Johannesburg (and I had not been far wrong when I told the man on the plane that they had built this city) fell roughly into three categories: the old-time magnates, who fifty years ago stole more money before breakfast than latter-day, mundane thieves do in an entire lifetime of crime, but who were now monumentally respectable; the cultural strata, who made of this city an oasis of entertainment; and the youngish, smartish operators who knew a good thing when they smelt it.

Joel Sachs, of course, was one of the last. In the cut-throat world of advertising, his knife had so far proved the sharpest, his own throat the most durable, and his sense of timing the most acute. I was very glad to have him on my side, and I hoped – or let’s say I knew – that the feeling was mutual.

Eumor Eumorphopulos was really my favourite man, if a young woman of twenty-six heavily involved in business must have a favourite. He was a Greek (what else, indeed?), about fifty-five, small, compact, indestructible, wonderfully crafty. I don’t know what had brought him to Johannesburg, with empty pockets, thirty years earlier, but he was certainly an asset to this city, and incidentally to me.

Stairlift to Heaven by Ravenscroft, Terry
To Thee Is This World Given by Milam, Khel
They Also Serve by Mike Moscoe
Kosher and Traditional Jewish Cooking: Authentic Recipes From a Classic Culinary Heritage: 130 Delicious Dishes Shown in 220 Stunning Photographs by Marlena Spieler
The Stage (Phoenix Rising #1) by Shelby Rebecca
Peas and Carrots by Tanita S. Davis
Mistletoe Murder by Leslie Meier
I Want Candy by Susan Donovan
Redwood: Servant of the State by Reed, Jaxon
Get the Glow by Madeleine Shaw
Our partner