Read The Pink and the Grey Online

The Pink and the Grey 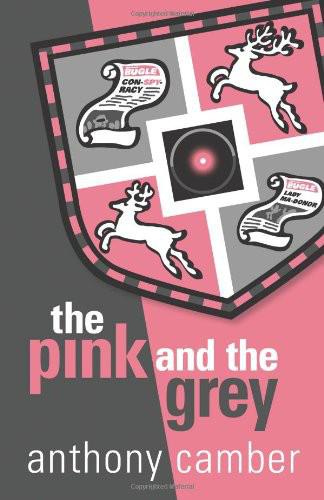 First published in 2012 by David A Smith

Anthony Camber has asserted the right to be identified as the author of this work in accordance with the Copyright, Designs and Patents Act 1988.

St Paul’s College and the characters and events of this book are fictitious. Any similarity to real colleges, or persons dead or alive, is coincidental and not intended by the author.

For the present and the absent

She grunted from behind her desk. Her voice was like frogs boiled in whisky, and her words, as ever, left the English language impaled on a blunt pike weeping softly. “You very well may justice your imbroglio in that manner, but I mark it zero of an excuse.”

I hesitated, then decided I dare not ask whether she had heard me correctly. It was too great a risk: I might have found myself bundled promptly out of college, with bags to follow. I used the opportunity to practise contemplative silence and engage in some guilt-stricken head-hanging.

“I declare it of terrible disappointment, Dr Flowers. Overwhelming in terribility. This is the second occurrence upon my carpet.” She tapped a red biro onto the doodle-enhanced blotting paper in front of her.

I nodded apologetically, as genuinely as I could fake. Indeed she was correct, it was the second time I’d been summoned into her dark subterranean lair at the far end of the Admin dungeon, for an hour stretched upon her verbal rack. The first time had been in distressingly similar circumstances, following some late-night carousing with a young gentleman not of this college in which New Court’s nineteenth-century fountain had played a vomitous part. On this new occasion there had been no urgent ejection of curried beer and no acid-stained stonework, but there would be a deal of tilling and replanting by the college gardener. And there was, most assuredly, a young gentleman not of this college. For the avoidance of doubt, a different gentleman.

“This is a college solar-powered with enlightenment, and as such I am not in place to dwell unduly amongst the, uh,
particulars
,” she said with a gently fragrant distaste and a biro twirl.

“I can assure you, Amanda—”

“But, Dr Flowers.
But
.” She peered uselessly over her purple spectacles and slotted the biro back into the plastic pot on her desk reserved for red biros.

I held my breath expecting Empress Palpatine’s electric wrath to crackle from her withered hands and yet nothing, it seemed, was to follow the
but
— except fiery coffee breath and the undamped shudder of her chins. She steepled her fingers and bounced them against her upturned mouth, the lipstick and nail varnish forming a twitching purple moustache. Purple was
her colour
, she’d declared, hence her apocalyptic trouser suit: throbbing purple trimmed with the yellow of a thousand strangled canaries, and evidently rescued from a damp skip outside a holiday camp.

I shifted buttocks, awaiting a sign — sparking black smoke from the ears, or the disquieting smile of a mass murderer about to unsheathe a glinting blade. Nothing. I busied myself estimating train times the hell out.

“Dr Flowers,” she said finally, formally, ominously, with hands together as in prayer. “You must fathom that it is unacceptable for a fellow of the Holy and Glorious College of St Paul, no matter how festooned with industrial garlands and salopettes he may be, to gallop unhindered across pristine, golden sands.”

She’d lost me at
festooned
, if I’m brutal. I hadn’t encountered her quite as indecipherable as this before. I pumped myself up to bleat some well-rehearsed mitigation but she raised her hand and I deflated to a mild squeak.

“Spencer,” she said more softly, in the sense that topaz is softer than diamond, “your peccadilloes are, need I subtract, well known and fully usual in this place.” She raised a nail to a familiar portrait behind her, like ET pointing the way home. “Our founder was, I might say with some little exaggeration, similarly persuaded. Believe me when I speak I have no interest whatsoforth in precisely
whose
dillo, or indeed dilloes, you peck. It has all, is all, and will be all, seen before.”

I glanced up at a corner of the office, where a dim red light located one of college’s uncountable CCTV cameras. The masochistic chunk of me rather wished to see the recording she and — I was sure — several others had undoubtedly viewed many times. The sober chunk of me wished for a gin. Amanda could provide the ice: yank on an earlobe and a nostril would emit cubes.

“This college has shoulders of breadth and our bosom accommodates every spice. We take pride in our, as it were, pride. We celebrate our diversions. Our history welcomes careful drivers.”

“The brazen flowering of nature unkempt, Dr Flowers. The infinitely unmitigated lack of discreetfulness. The casuality.”

“I welcome indeed your regret, twice bitten though it is. May I ask if you and he are—” A narrowing of the eyes. “—courting?”

I swear by almighty jeebus I saw the portrait stifle a powdered giggle. Our benefactor, our founder, minced theatrically down upon us through two centuries of dust and nicotine on oil. James Drybutter: a fop, a
macaroni
, a gentleman’s gentleman and a gambler of some skill and much fortune. He formed and funded the college as a haven outside the capital for like-minded fellows to further their education along multiple independent and occasionally perpendicular axes. But despite his success in the sport of kings, Lord Luck deserted him (regularly) in the bedchamber and upon his early and rampantly syphilitic expiry we were indeed well-endowed.

I decided it was safest to assume Amanda meant
courting
in the sense of
a relationship
, rather than any of the euphemistic alternatives that leapt readily to mind.

“It is early days,” I fibbed, raising a hopeful smile and what I prayed were convincing eyebrows.

This off-white lie placated her sufficiently and spring came unexpectedly to Narnia. “Well then, I am— pleased,” she said brightly, but with the merest tickle of a pause before
pleased
that entirely inverted the sentence. “You must— bring him to a thing.”

And it was agreed: I must on no account be seen with the offending gentleman again. This was entirely acceptable to me. Stumbled upon by our dear ancient Praelector
in flagrante
in the throes in the bushes — the
autopilot du vin
having thrown us off course to a bumpy and soily emergency landing — my companion had hopped off at some velocity leaving me to face the purple symphony alone. As first dates go, well, let’s say
he wasn’t a keeper
.

The non-invitation had apparently exhausted Amanda’s supply of pleasantries, and dark clouds crackled once more around her Cruella do.

“Be that as it be,” she began, finger-rifle aimed at my heart, “for your first infringement I decided a warning would suitably deter you away. It is now globally apparent to everyone, of particularity the poor innocent Praelector, that I must react through proactivity in response.”

I nodded through the jumble. “I understand,” I replied, engaging wobbly lower lip at ten percent thrusters and staring again at my ageing and still slightly muddy Converse.

“I cannot be seen to allow you to escape away from your actions, as it were, scot-freely.” (Which reminded me that Scott was the name of the scarpering gentleman in question. I resolved, once released from my shackles, to add him to my phone as
Scott — git
.)

So, this time I was to be punished. What would the punishment reveal itself to be? It was evident that I wasn’t being tossed through the collegiate door. But perhaps a fine? She had eight hundred years of Cambridge precedent to leaf through. A ducking? Was I to be paraded through the major streets in my unfortunates? Something unseemly to do with a lady? My mind raced.

Amanda selected a new biro from the pot of red biros and began tapping again upon the blotter. I wondered if the tapping was a kind of kinetic energy transfer device — a mental elastic band powering her clockwork brain.
Wind her up and watch her go
. At any moment I thought a cuckoo might spring from her ample Klingon forehead and announce the hour.

Lest I be misunderstood, I wasn’t being misogynistic about the batty old dear. It was unrelated to gender: I simply didn’t rate her or, as it happens, like her or get on with her very much if at all. Despite my initial high hopes upon her installation she had proved herself unable even to doggy-paddle once out of the calm waters of college and fellowship and exposed to the stiff south-easterly of the university.

Of course some — though by no means all — of those in college chummed-up in furtherance of their careers on an almost hourly basis, fawning and whinnying and genuflecting as she cantered around barking claptrap and dispensing her
mal mots
. I chose to remain aloof and downwind, a pawn of a different colour, attracting her attention only on unfortunate occasions such as this.

I glanced around her dungeon office as she marked time on the blotter. It was a low, narrow rectangle suffused with the charm and warmth and strip lighting of a disused railway station waiting room. Underground and thus absent windows, its walls were hung with excessively enlarged black and white photographs of college: late pixellated regency from all angles, like a bank of screens in the office of a murderously short-sighted security guard. If I stared too long at them my eyes crossed — “magic eye” images,
sans
magic.

Amanda’s elaborately carved and decorated thick oak desk, dominating one end of the room, proved the rule that the size of a desk is directly proportional to the self-importance of its owner. A carefully shielded laptop reflected from her glasses, showing occasional hints of shapes in motion and text perhaps describing my fate. Undoubtedly in purple, and probably in
Comic Sans
.

Behind the Master’s head the portrait of our own, dear queen — the founder — hung framed in golden flames to distract attention from its shortcomings. He and she gazed upon the crumbliest of nineteen-eighties furniture, all ash greys and buttock-numbing straight lines — the college refurb budget not stretching this deep into the Admin dungeon — plus a drab, pinewood drinks cabinet calculatedly too distant for her to feel obliged to offer her visitors a sniff of its innards. The room wafted with instant coffee and undertones of ozone, the latter from an obsolescent laser printer skulking and venting like a cornered skunk.

The tapping stopped, and Amanda’s bloodhound eyes fixed me with a rheumy, purple glare. “You are an intelligent man, Dr Flowers.”

“Thank you.” I looked away. This was unquestionably a trap.

“You are an intelligent man whose natural predilections facilitate the occasional poorly chosen decision, while in combination with the nihilistic demons of the devil drink.”

That covered all men, give or take the
intelligent
. “We are all ultimately slaves to our genes, Amanda.”

“I’m talking now,” she interrupted, and then was silent again. Seconds ambled past. I opened my mouth, she raised her biro, I closed my mouth. Finally: “I have decided my choice.”