Read The Pirate And The Pussycat Online

The Pirate And The Pussycat 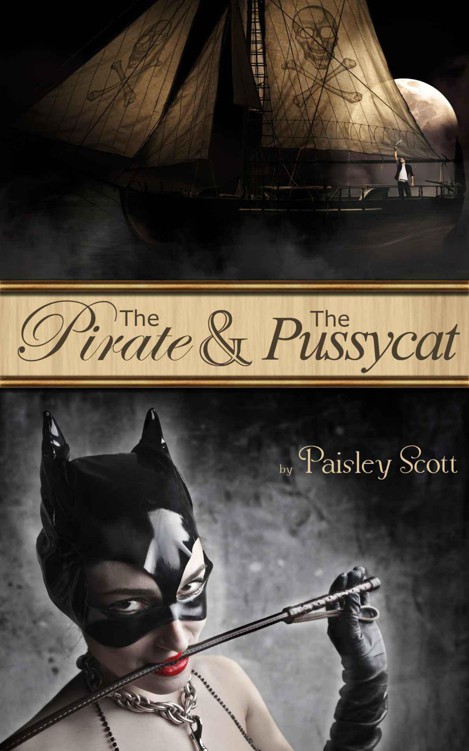 All rights reserved. No part of this book may be used or
reproduced in any manner whatsoever without written permission of the author except in the case of brief quotations embodied in critical articles or reviews.

To my wonderful husband, Brandon, and all my girls at RWU!

What people are saying…

“The Pirate and the Pussycat is a definite keeper for this reader! Paisley Scott’s characters bring humor, unexpected plot twists and unbelievable heat to every page…and did I mention the heat? The sheer sexual chemistry between the hero and heroine will knock your socks off! Kudos to this talented, up-and-coming author—I can’t wait for her next release."—Shelby Reed

Tonight, she was a seductive cat woman.

Not in a million years would anyone have guessed high school science teacher Cecilia Thomas lay beneath the tight-fitting costume of shiny black latex. The pants were actually shorts, and hugged her thighs and ass like a second skin. The halter top had a plunging neckline and two leather straps that crossed over her flat stomach, while elbow-length gloves covered her hands and most of her arms. Her thigh-high boots boasted five-inch spiked heels, bringing her height to a full six feet.

She turned and looked at her reflection from the side. She had to admit, she did look sexy in these clothes. A thrill raced through her. Truth be told, it was kind of empowering to look like this and know that no one knew who she was. She could do or say anything she wanted.

After a few last minute touch-ups, she descended the stairs. Smiling up at her, their arms looped around each other in a comfortable embrace, was a heavily made-up Alice and a hunky White Rabbit.

Marilyn curved her hands and scratched the air. "Rawr, girlfriend. You look hot!"

Celia posed at the stair landing, then giggled and walked up to them. "So, you guys are absolutely sure you want to do this?"

Celia grinned and pushed his arm away. "Calm down, Winston. You’re a happily married Leporid."

He gave her a classic, silent-movie knuckle-biting gasp. "Noooo! Please, no teacher-talk! I can’t take the pain!"

He grinned. "Ce-Ce, with a body as rockin’ as yours, you gotta know you give all them sophomores in your biology class little woodies, right?"

Marilyn giggled and whapped her husband on the shoulder with her box of chocolates labeled Eat Me!

Two white paws rose in defense. "All right, all right. Whatever you teach those impressionable young men is your business."

Celia looped the leather cat-o’-nine-tails around her shiny belt. "Whatever you talk about while you and Jack are coaching your football team is between you guys. I’m on a need-to-know basis, and I sincerely do not need to know what sort of locker talk you’re privy to."

Marilyn flounced her light blue mini-dress and turned her Mary Jane shoes inward, striking the pose of a pouty little girl. "Nobody fantasizes about a boring ol’ bank teller."

White Rabbit grabbed her and pulled her to him, rubbing his hips against her suggestively. "You’d be surprised, babe. I’ve heard a hell of a lot of wicked stories involving sexy tellers. Especially ones that look like you."

Marilyn squealed in delight as he nibbled her neck. "You man-beast! Let’s go before we embarrass the poor kitty."

Celia turned and fidgeted with her home alarm system. "You’re not embarrassing me," she lied. Sure she was embarrassed, but mostly she was jealous. She wished she could have as intimate a relationship. Winston and Marilyn had been married for nearly seven years, and they were still as lusty for one another as a couple of college kids.

God, she needed to get laid.

They drove to the ritzy part of town and pulled in front of Le Maison des Loups, The House of Wolves. Perched on a rolling hilltop, the house was a huge mass of engraved stone and Greek architecture. Gargoyle-like wolf heads were carved into each column and around every window and door. There were even twin wolf images staring sightlessly from the front gate.

The owner, Devlin Wolfe, had quite a reputation for being a philanthropist, but no one really knew him or what he looked like. And folks like him had enough money that society actually bent to their whims instead of the other way around. When he asked to be left alone, they honestly left him alone, and he repaid the favor by donating generously to various charities and efforts. This year he was hosting the Halloween Ball to benefit local shelters. The bank where Marilyn worked bought tickets in bulk since the Wolfes were longtime patrons, which is how the three of them landed at this fancy shindig in the first place.

"Damn, do you think this is real marble?" Winston whispered as they entered the foyer.

"No. I think it’s actually vinyl." Marilyn nodded and lowered her voice. "Probably to match the vinyl siding they have outside."

Winding her arm around his back, Marilyn patted him softly on his fluffy butt. "You’re lucky you’re so cute, baby."

Celia smothered a laugh as they wound their way through the crowd toward the voluptuous vampire leaning against an elegant desk in the center of the oval entry hall. She was giving out numbers and pointing toward different rooms adjacent to this one. As they approached, she handed Celia a number.

Seven. A flutter skittered through her as she looked at the piece of paper in her hand. Lucky number seven. Though she had no clue what the number signified, Celia teetered on giddy that she’d been given her favorite number. Silly as it was to even have a lucky number. Clearing her head of such nonsense, she asked, "What do we do with this?"

The vampire grinned, baring perfectly white fangs against her blood-red lipstick. "That’s who you’ll be partnered with. It’s a charity ball, after all. All the women get a number."

"What if we’re otherwise...committed?" Marilyn asked, nodding toward Winston.

Elvira shrugged and pointed toward the fishbowl on the desk beside her. "You can put the number back and stay with Harvey there, or you can see what’s behind door number two. It’s up to you, sweetie."

"I better not." With a sigh, Marilyn dropped the number back into the bowl and grabbed the elbow of her six-foot tall rabbit. "We’re off to explore. Have fun with your charity case, Celia," she said, blowing a cloud of kisses as they glided into the first room on the right.

All the rooms branched off the center hall. Where should she go? Which room? Above each of the double doors were signs. The room Marilyn and Winston had entered was marked Anything Goes. Another room bore the title Renaissance Festival, and yet another said Space Opera.

She tapped the number against her chin. It was a themed masquerade party. Interesting. She’d never admit to any of her adult friends nowadays, but as a kid she loved role-playing games. She hated when her friends outgrew the fun and she had to leave it behind. But now, tonight, she’d be able to relive it—if only for a few hours.

The leather whip slapped softly against her thigh as she headed toward the room called The Jolly Roger. Anyone who knew her knew she was a sucker for adventure on the high seas.

Entering the room was like boarding a ship. A long wooden plank led up to the second floor, which held a small crowd of yarrr-ing buccaneers. There was a crow’s nest in the center with a wide expanse of ropes rigged to it.

Man, this is so cool!

"Ahoy there!" a voice boomed from above.

Looking up, Celia spotted a man dressed like a pirate captain—or at least the sort of pirate captain she’d always fantasized about. A white, ruffled shirt open to his waist adorned his muscular chest. His pants were tight and black, leaving little to the imagination. The bright red silk sash tied around his waist only accentuated his manly bulge. A pair of high boots cuffed at the top rounded out his outfit.

He slid down the ropes and drew his cutlass as he approached. "What business have you aboard my ship, wench?"

Wearing a bandana around his head and a Zorro-type mask across his eyes, his face was a mystery. His voice was smooth, like perfectly aged brandy, and his body was to-die-for. His tanned forearms, visible through the lightweight shirt, were strong and sinewy, the dark hair covering them lightened to a golden shade by the sun. Her gaze wandered across the scarlet sash at his waist and lingered a moment, appreciating the way his upper torso slimmed, then flared at his legs. Damn, he had nice thighs. Encased in the tight-fitting pants, the muscles bunched and relaxed with each movement. Her mind wandered, conjuring images of how his body would look without clothes. Her breath caught. He would be magnificent.

"What’s the matter? Cat got your tongue, kitty?" he asked, trailing the blunt side of his cutlass against her bare arm.

She shivered as the cool steel slid across her skin. The feel of it was dangerous and alluring at the same time. This is role-playing, Celia. You can do this.

"S-sir, I need passage on your ship."

"Women are not allowed." His amber gaze raked her from head to toe.

She cleared her throat, exorcising the nervousness. "But sir, I have already stowed away." She indicated their surroundings. "The next port isn’t for miles. Please. As a gentleman, you must help me."

He sheathed his sword. "Madam, I assure you I am no gentleman." His eyes darkened rakishly. He straightened and held out a hand to her. "Pray, what number have you?"

"Seven." She gave him the slip of paper.

"Ah yes. Lucky number seven." A dark eyebrow arched thoughtfully above his mask as he glanced at the note. "This guarantees you safe passage upon my vessel." He slipped the paper into his pocket. "Come now, wench, before the crew sees you."

Celia followed him below the deck and into a lavishly decorated cabin. There was a huge round bed situated against the back of the make-believe ship. A night scene embellished the windows behind the bed, complete with a full moon reflected against the inky darkness of the night sea. It was so realistic. So far, she was loving this game.

He leaned down to her. "What are you called?" His voice was low and husky against her ear.

Shivers ran up her spine. It was hard to stay focused. His warm breath blew across her skin, caressing her. "Y-you may call me Kitty."

Hostages to Fortune by William Humphrey
You Only Love Once by Linden, Caroline
Savaro's Honey Buns by Remmy Duchene
The Dice Man by Luke Rhinehart
Claiming His Need by Ellis Leigh
Her Baby's Bodyguard by Ingrid Weaver
Euphoria-Z by Luke Ahearn
The Cowgirl Ropes a Billionaire by Cora Seton
The Wedding Shawl by Sally Goldenbaum
The Taste of Innocence by Stephanie Laurens
Our partner